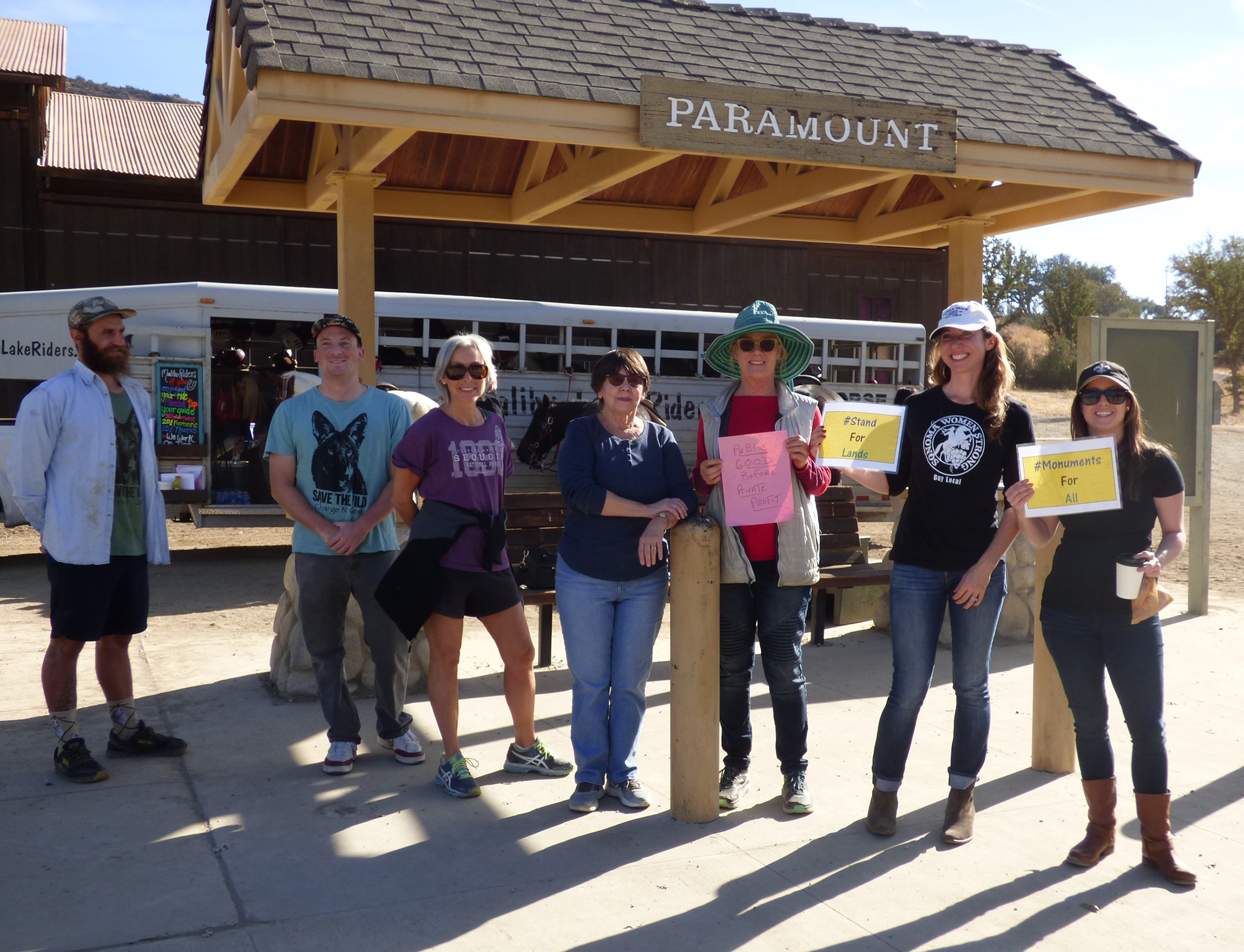 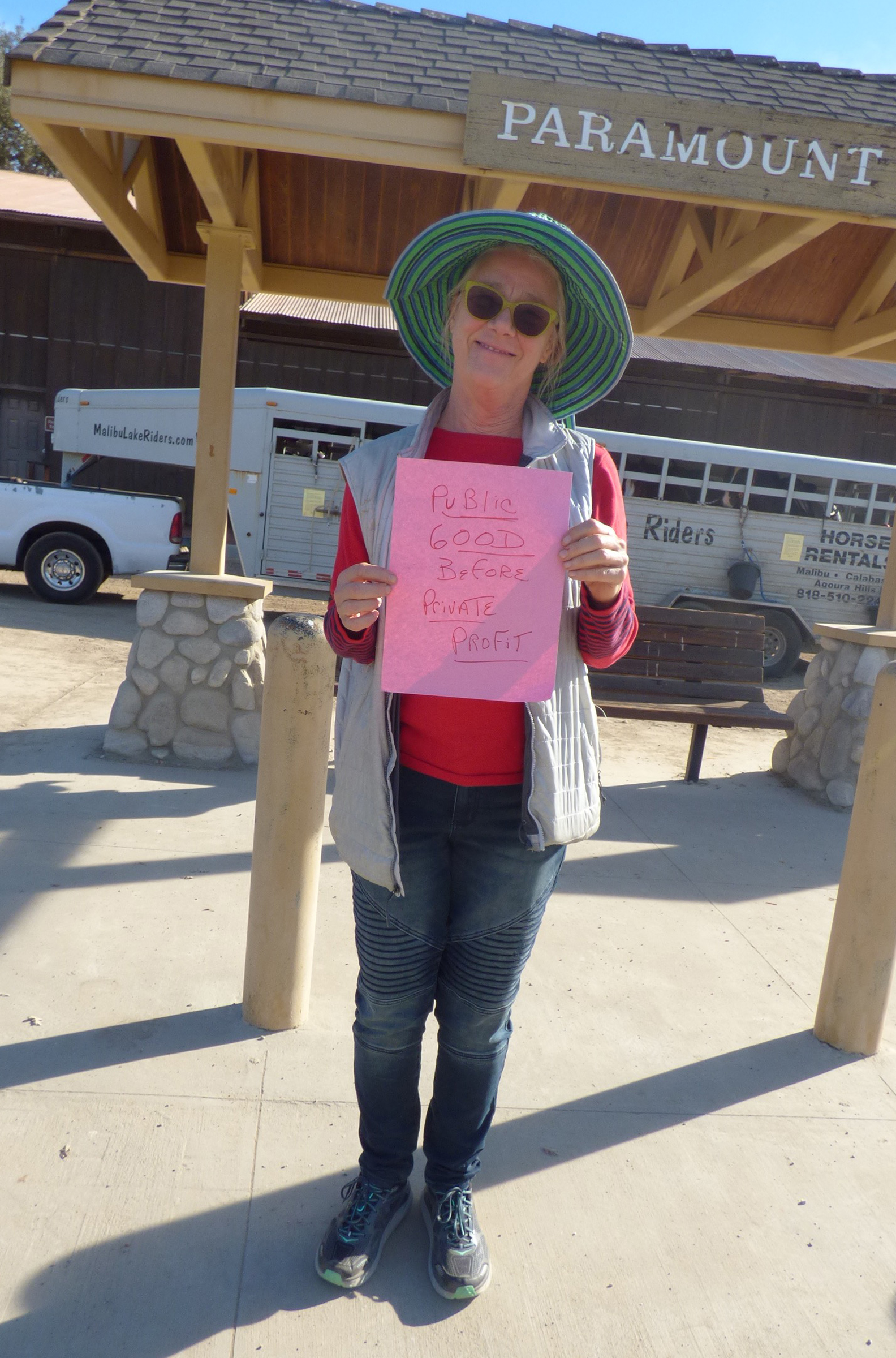 Local activist Kian Schulman of Poison Free Malibu, standing up for parks at Paramount Ranch, with her sign that reads "Public Good before Private Profit. Photos by Suzanne Guldimann 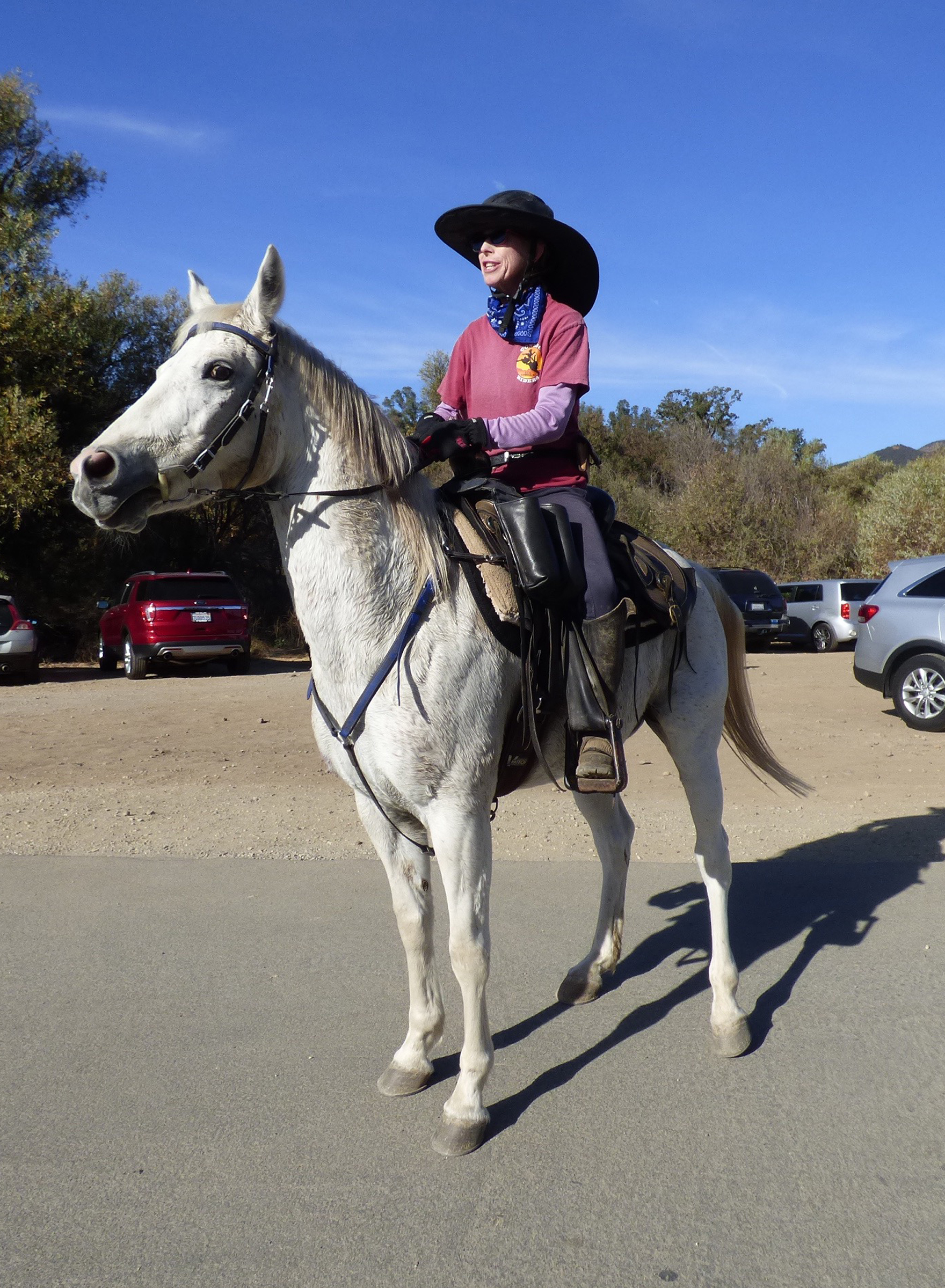 Jeanette Wells on her horse at the event. 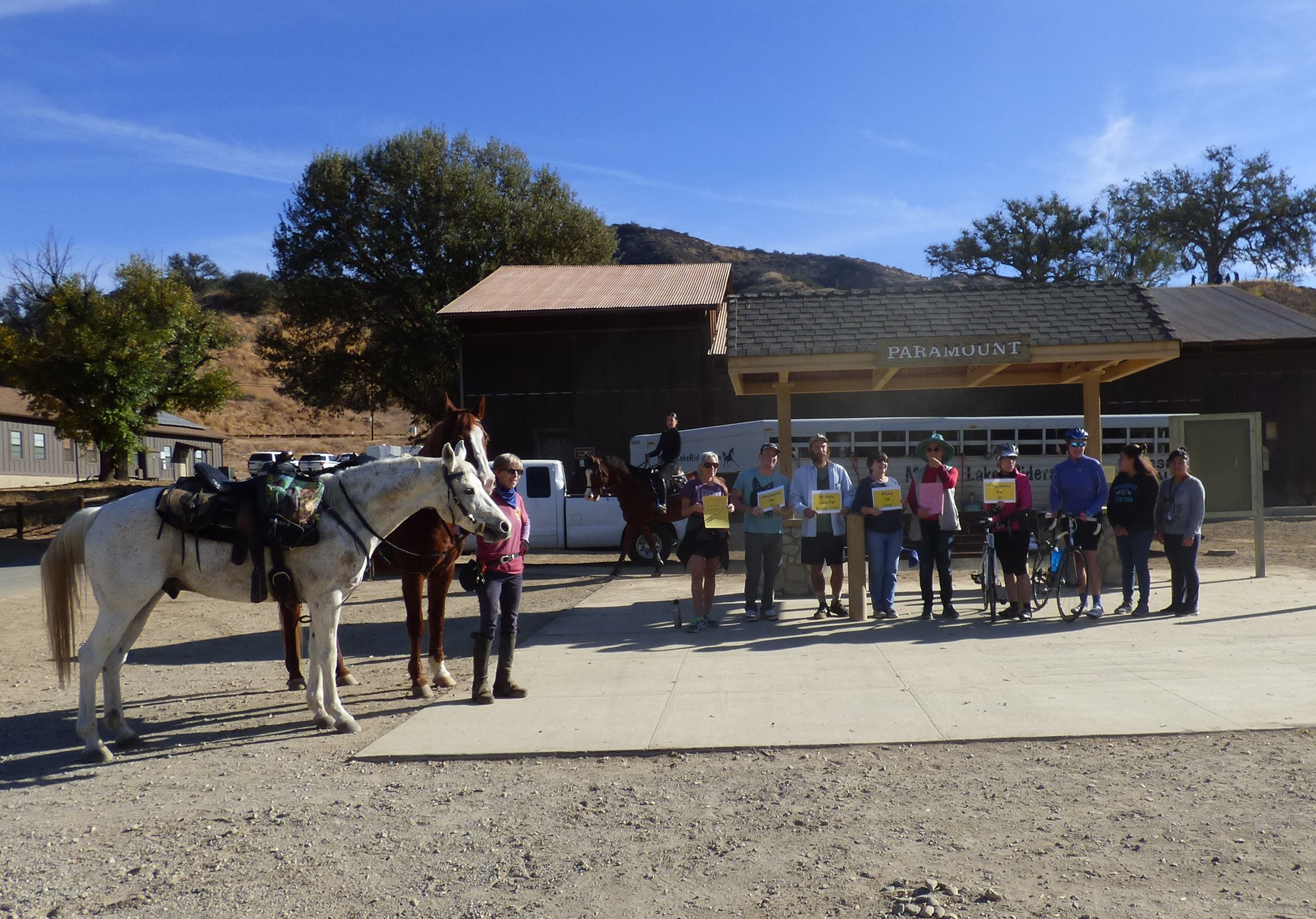 Concerned citizens gathered at Paramount Ranch in the Santa Monica Mountains National Recreation Area (SMMNRA) on December 2, in solidarity with activists all over the country who came together to protest the Trump Administration’s attack on public lands.

Activists warn that Trump isn’t planning to stop with the Utah monuments. He has two-dozen more under review, including California’s Carrizo Plain National Monument and the San Gabriel Mountains National Monument, two key habitat areas that are essential for wildlife migration and dispersal throughout Southern and Central California.

Observers fear that the dismantling of the Antiquities Act will leave all national parks and monuments at risk, even popular and much-used locations like the SMMNRA. Trump’s action is seen as a way to open the door for the unmaking of any park that contains resources of value to developers, the oil, mining and lumber industries, and other powerful lobbying groups.

Trump boasted at the signing ceremony that he is a real estate developer and stated that the Utah monuments were “harmful to ranching, hunting, and development.” He stated that the federal protections “impede” the construction of roads in undeveloped areas.

“This tragic overreach of the Antiquities Act threatens your hearts,” he said.

Critics, including tribal governments and conservation organizations, counter that it is the oil, mining and cattle industries who are threatened, not “rural families stopped from their beloved activities,” as stated by the President. They question Trump’s authority to tamper with the Antiquities Act used by previous presidents to create new national monuments by executive order, and the legality of the President’s proclamations.

The National Resource Defense Council (NRDC) has already vowed to challenge Trump in court, as well as the Hopi Tribe, the Navajo Nation, the Ute Tribe, the Ute Mountain Ute Tribe and Zuni Pueblo.

“We will stand and fight all the way,’ said Russell Begaye, president of the Navajo Nation.

“The Antiquities Act of 1906 gives presidents the authority to designate national monuments,” NRDC President Rhea Shu Tweeted. “It does not empower them to slice up monuments designated by others.”

The Antiquities Act has never been challenged. It has been accepted that presidents cannot undo the monuments made by their predecessors, and that only Congress has the authority to make changes to a national park or monument. The legal battle is expected to go all the way to the Supreme Court.

Another battle is looming in Congress. Arizona Congressman Ruben Gallego is working to pass legislation to protect Bears Ears.

“[Trump’s] plan to shrink Bears Ears National Monument by 85 percent is unprecedented,” wrote Gallego in a Tweet. Gallego has co-authored legislation to protect Bears Ears and described Trump’s move to eviscerate the park as “reckless.”

“Unfortunately, following a review conducted with no meaningful input from the tribes, the Department of the Interior recommended downsizing the monument—an action that would be without precedent in American history.”

Gallego’s bill seeks to “protect the original acreage identified by the tribes as housing culturally sensitive artifacts and sacred lands.” Its co-sponsors include Topanga-area Representative Ted Lieu. It has also been endorsed by every major environmental organization from the Sierra Club and the NRDC to The Wilderness Society and Earthjustice.

“The Bears Ears National Monument Expansion Act is a model for how we should be protecting special places,” said Michael Brune, Sierra Club’s Executive Director, in support of Gallego’s bill.

“Instead of turning our public lands over to corporate polluters, our country should be protecting the landscape, wildlife and thousands of sites of spiritual importance within Bears Ears from threats like illegal ATV use, looting and vandalism,” Brune wrote.

However, Gallego is up against Utah Congressman and passionate oil industry advocate Rob Bishop, who is proposing H.R. 3990, a bill that would essentially eliminate the Antiquities Act, making it almost impossible for future presidents to create major new monuments, and easier for them to dissolve existing monuments.

Local activists are furious. Agoura Hills resident Jennette Wells organized the protest at Paramount Ranch. “I’ve never done anything like this before,” she told the Messenger. “But I was so angry I had to do something.”

Wells says she doesn’t use social media, but was able to enlist a friend to spread the word online. She signed up with the Center for Biological Diversity’s “Ignite Change” movement, filed for a permit for her event and rounded up as many equestrians, cyclists, hikers and park-going families as she could find on short notice.

To learn more about the fight to save Bears Ears, check out #MonumentsforAll, or monumentsforall.org.

A Japanese Meditation Garden In Topanga