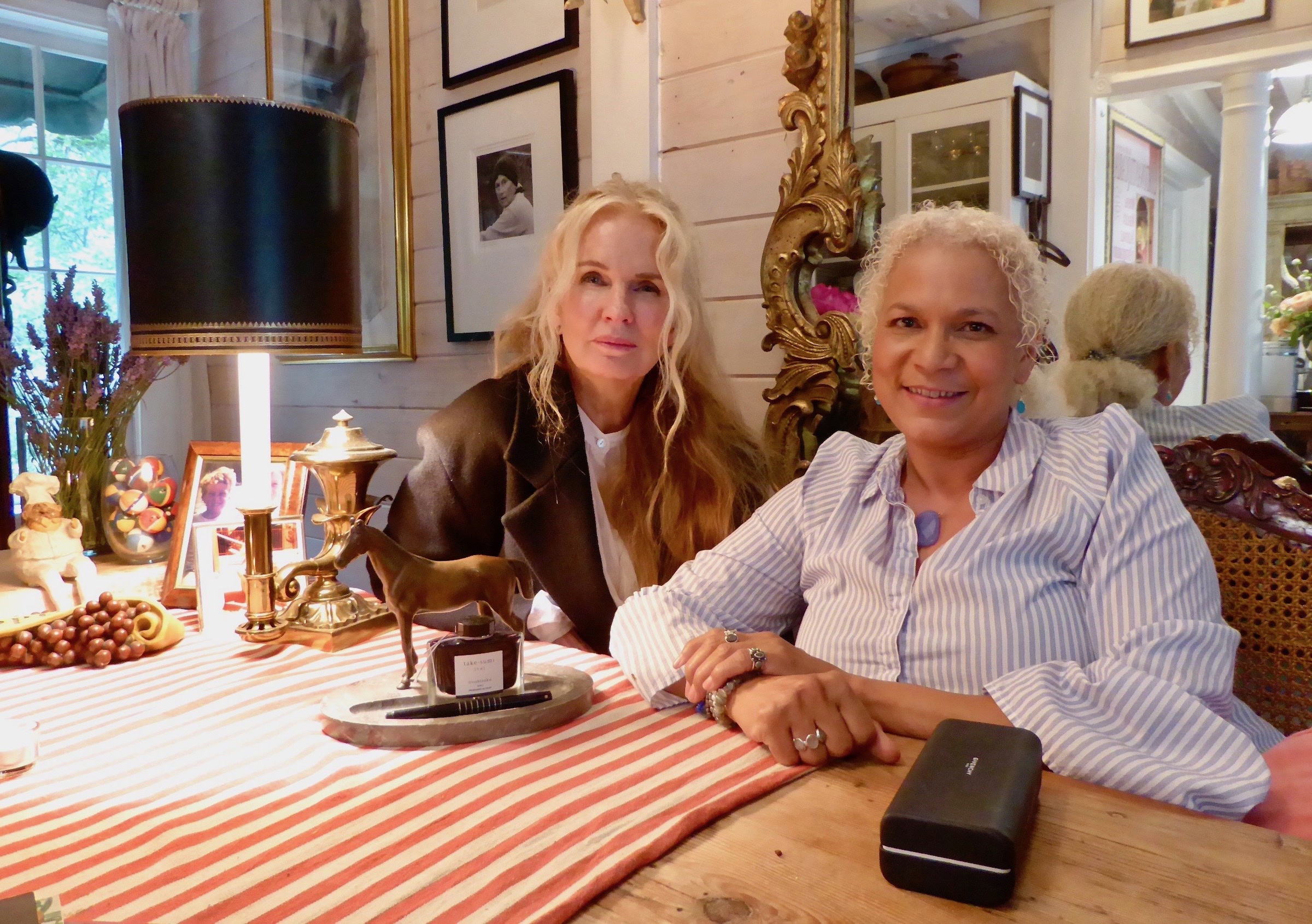 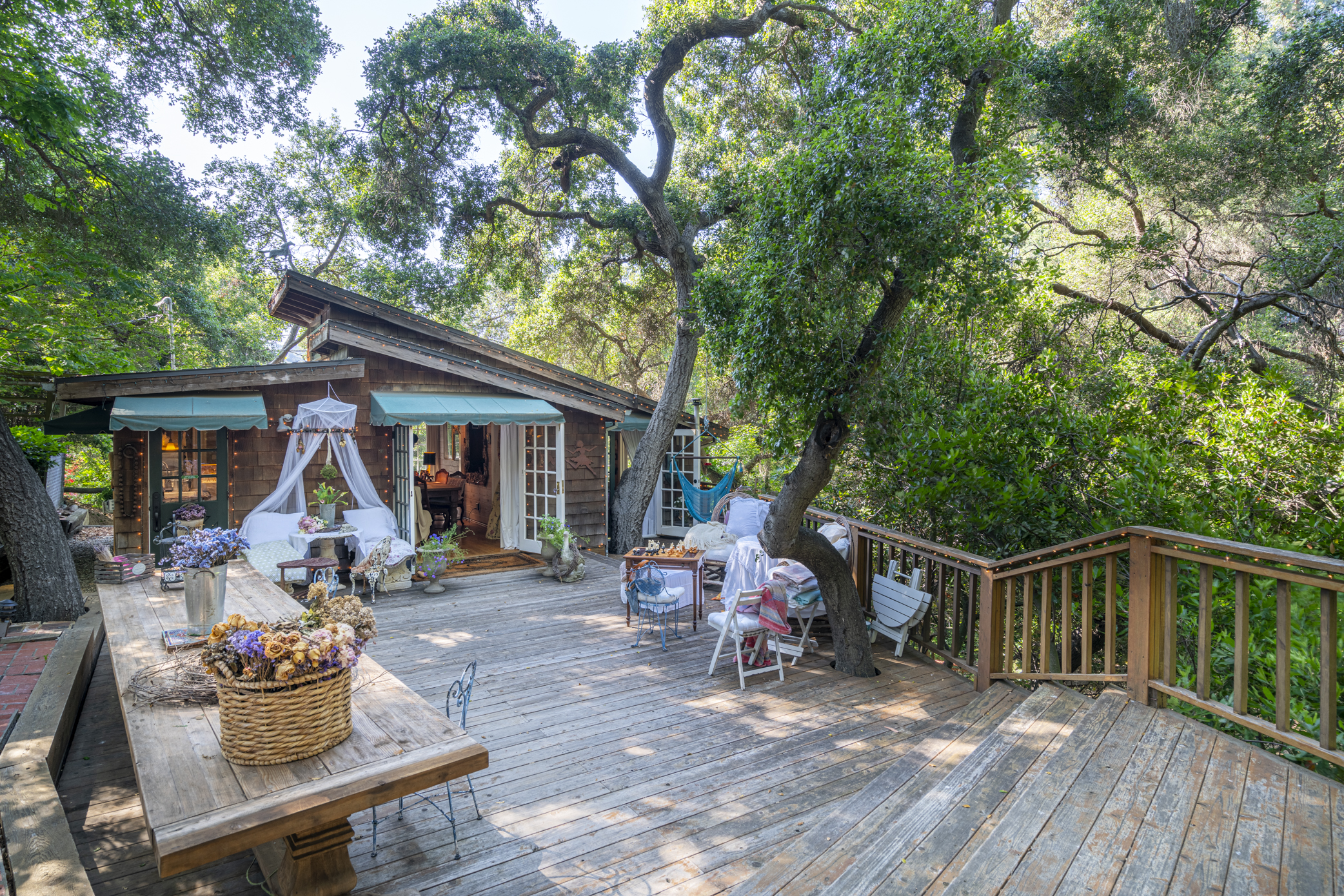 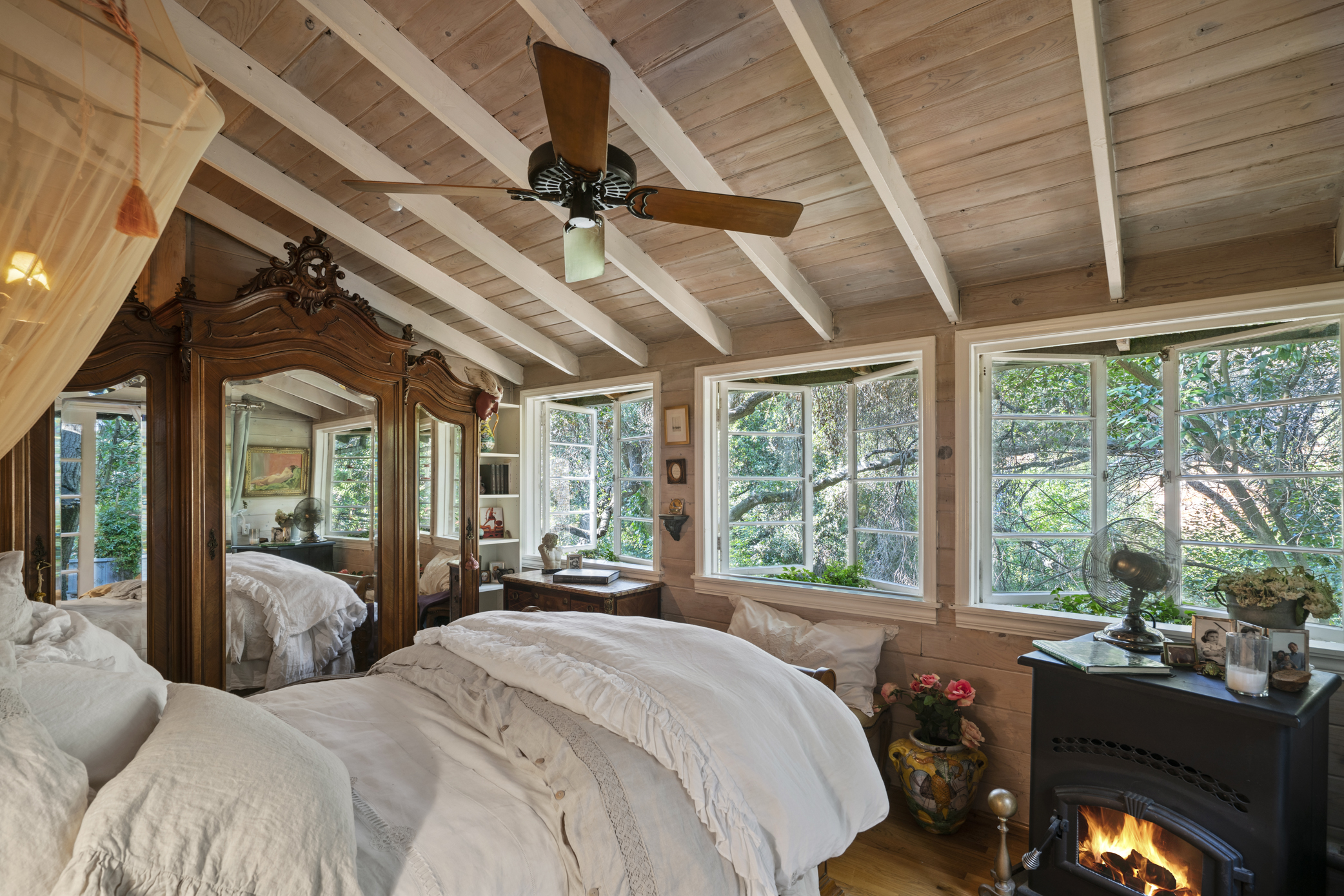 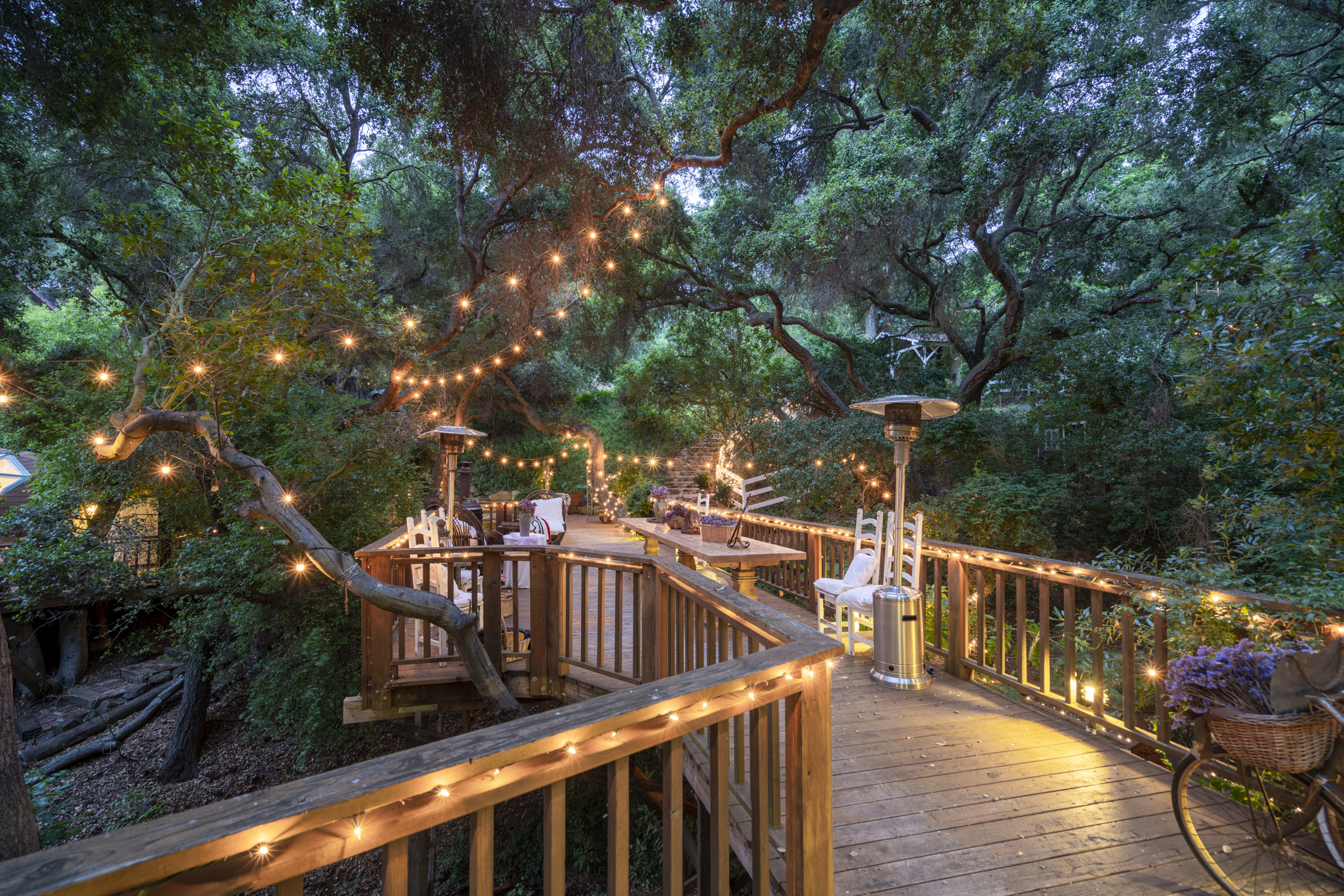 Beside a Topanga creek, among 32 ancient oaks, are two quintessentially Topangan cottages connected by a wide redwood bridge that is as much an outdoor room as it is a means of crossing the steep canyon that bisects the property.

Ceil “Red” Montgomery raised her three sons on the property. “I moved here in 1980 with an 18-month-old baby,” she told the Messenger Mountain News. “I was married to a musician, and I had transitioned from singing to television. We relocated to Los Angeles and were looking for a house. When I saw this property there was a field of wildflowers. I felt that if I had to die tomorrow I wanted to die here.”

She threw herself into canyon life, riding her horses in the Memorial Day parade, learning to work with bricks and stone to build the garden paths and steps that wind through the property, keeping an eye on her children and their friends as they flitted among the trees and across the bridges on the property.

After her sons had grown up and her marriage had ended, she reinvented her Topanga home into what she calls the Chianti Life Retreat, named for the Chianti region of Italy, which she visited on a life-changing trip in 2000.

The property has become a popular destination for wedding parties, honeymooners, and urbanites seeking a little peace and tranquility in Topanga.

The original rickety bridge was replaced early on as a safety precaution in a family with active children. Montgomery says she designed the replacement to be an outdoor living space as well as a bridge. It’s built around the trunks of the oaks.

“I was adamant about protecting the trees,” she said. “They are such a presence.”

Montgomery, a chef as well as an entertainment professional, transformed an old stable into a chef’s kitchen no bigger than the galley on a sailboat, but big enough to produce multi-course meals for a dinner club she hosts, and to cater for the visitors who come to stay on the property.

The bigger of the two dwellings is a two-story fairytale cottage built in the 1930s. It features a rustic treetop bedroom, a tiny living room, kitchen, and bathroom. The lower level, accessed by a ship-like ladder, has been remodeled into a boudoir or sitting room, with frosted glass a cream-colored carpet, and luxurious walk-in closet. The room opens onto the floor of the canyon, where the creek runs by.

The second dwelling is a small geodesic dome, separated from the larger cottage by the creek and accessed by one of two bridges. Montgomery remodeled the inside into a space that resembles a Greek fisherman’s cottage: thick white plaster has replaced the original plastic. There is a skylight over an antique bed, a tiny kitchen, and a full bathroom. Montgomery calls it her treehouse, and trees grow right through the deck, sheltering the dome like an egg in a bird’s nest.

“It was full of bees when I bought the property,” Montgomery recalled. “The hive was the size of the room. A guy in the canyon saved the bees and  relocated them. We had honeycomb to share with everyone for months.”

Over the years, Montgomery has filled the two cottages and her stable-turned-kitchen with antiques. There are carved and mirrored armoires, claw-fooded tubs in the bathrooms, and a mirror frame made from an antique wine barrel. The gardens that surround the buildings are decorated with  Victorian cast iron garden furniture, an old stone fountain, and antique wood-burning stove stoves.

It is clear Montgomery loves the property. She expressed joy that the oaks are thriving after this winter’s rain, and that her champagne grapes are recovering from the depredations of the deer.

“During the drought they came and ate all of the vines,” she said. “The deer needed them more than I did, but I’m glad the grapes are growing back now, setting fruit again.”

For all of her love of the home and the treasures it holds, Montgomery is ready to move on. The property is for sale; its owner is headed for a new adventure in Italy. She explained that she plans to open a cooking school, “French and Italian, something unique,” and create a TV series about her experiences. She’s also involved in a writing project.

“I’m finishing the manuscript of my third book,” she said. “It’s going to be about my move, the books are about my life.”

And the much-loved property she is leaving behind her? “It needs someone with a sense of spirit,” Montgomery said. “It’s special. Topanga is authentic. It’s like they say, ‘don’t change Topanga; let Topanga change you.’”

For more information on the property, which is being offered by Compass Real Estate’s Adrian and Jordan Wright, of the Wright Way Team, visit  https://www.thewrightwayteam.com.

Reggae ‘Pon The Mountain Grows Up