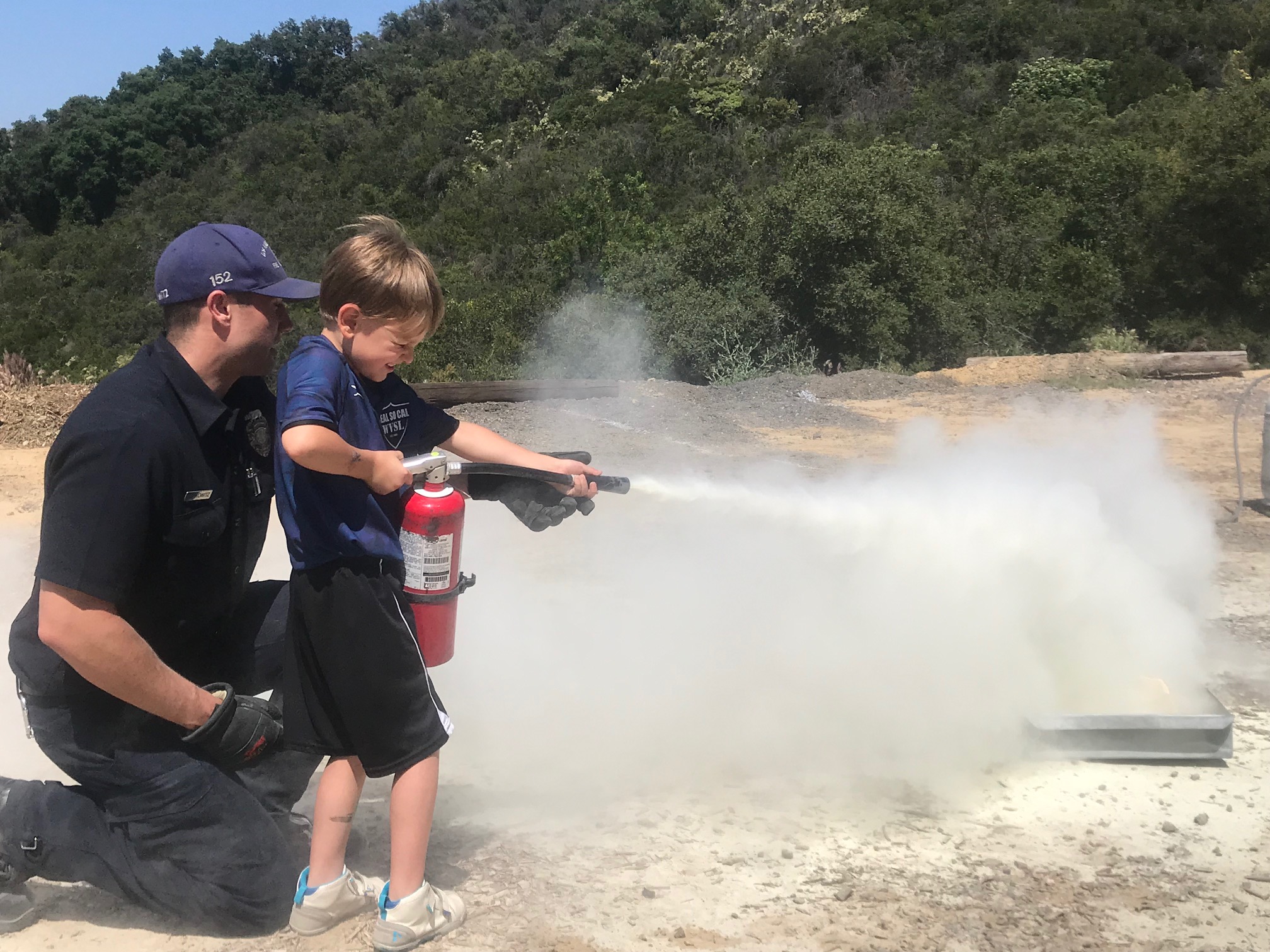 Elliot Rockwell learns how to use a fire extinguisher from the pros. Photo by Kelly Rockwell 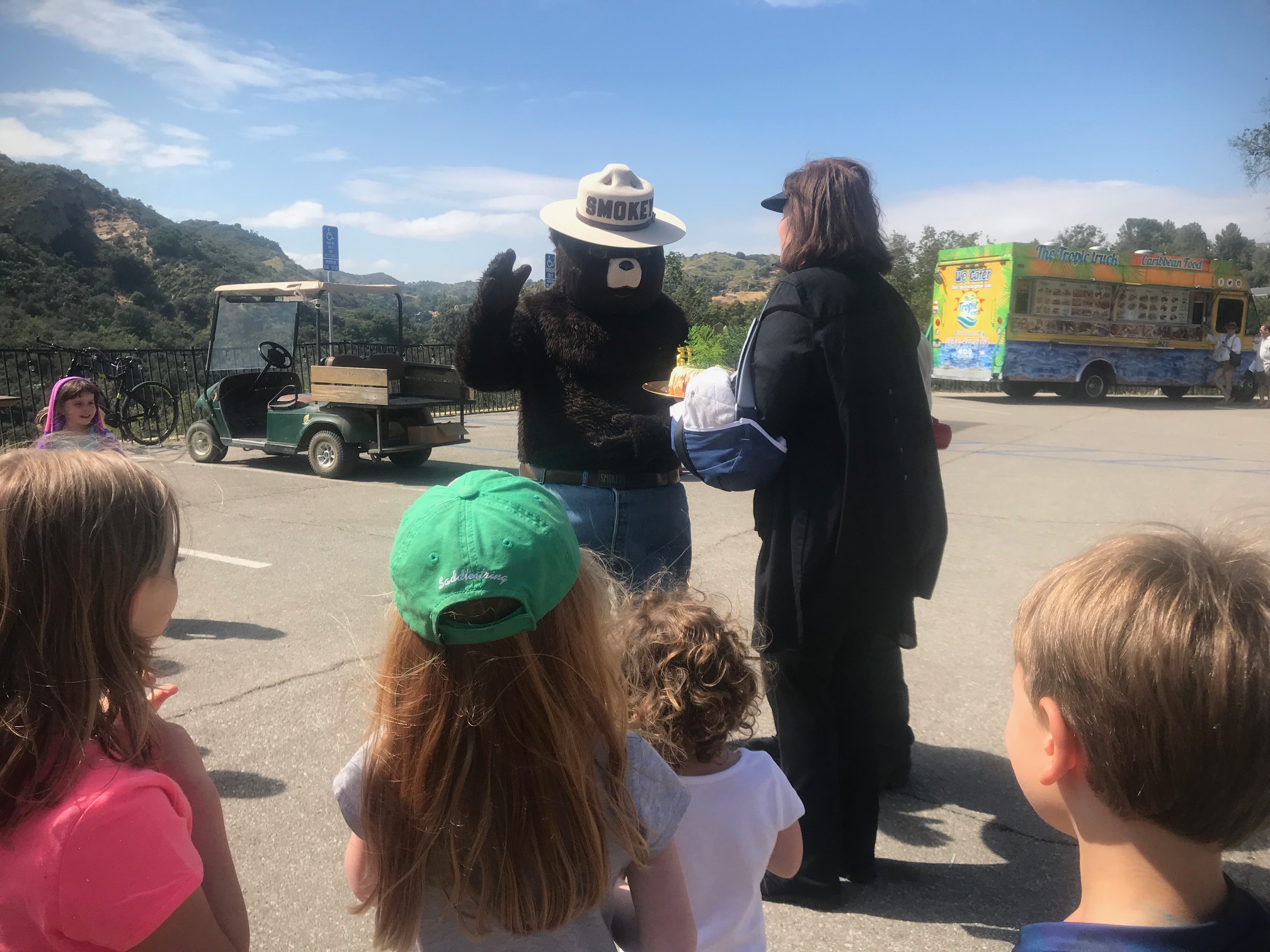 Stacy Sledge presents the birthday cake to Smokey, who requested not to light the candles. Photo by Kelly Rockwell 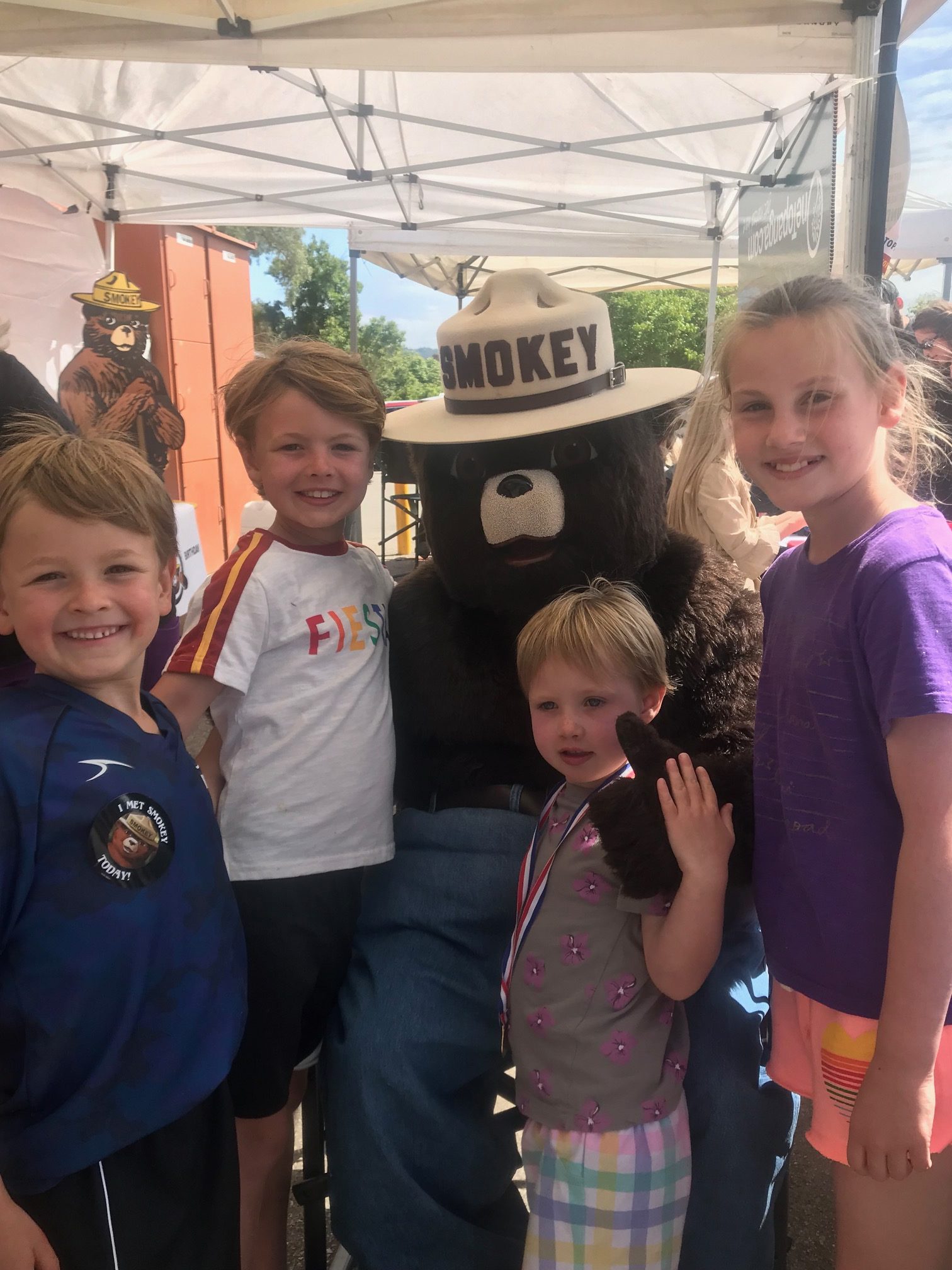 Kids at the fair couldn’t get enough of Smokey’s bear hugs. Photo by Kelly Rockwell

In a huge paradigm shift within the fire department after the Woolsey fire, county officials are considering the future of firefighter volunteerism, possibly a reserve program emulating an established program in the sheriff’s department.

Six months after the devastating Woolsey fire, Topangans paused to take stock of the incident hoping to create a clearer picture of what happened and what we can learn from it.

At the 2019 Topanga Emergency Fair on May 5, first responders, volunteers, and residents gathered to tackle some lingering questions. How do we prevent future breakdowns in communication? What lessons have we gleaned from the Woolsey Fire response, as well as that of the 1993 Topanga Fire?

Inside the Community House, the well-attended discussions were, at moments, tense. Several residents brought up the power outage in the wake of the Woolsey Fire and the length of the Topanga evacuation as key concerns.

L.A. County Office of Emergency Management Sr. Emergency Program Manager Jeanne O’Donnell voiced a prevailing response: “The Woolsey Fire could have been here in half a second. We were so lucky with the way the embers went.”

LA County Fire Chief Drew Smith explained how embers can travel several miles ahead of a fire—and how easily they could have gusted to Old Canyon if the wind had shifted. This was the pivotal reason for keeping the evacuation order in place. Topangans who lived through the 1993 fire might recall how this scenario played out when the fire turned back towards Topanga with a coastal wind change.

“Go early. Time is crucial,” stressed Smith. During red flag conditions, fires can travel in excess of 30 mph. He urged residents to be aware of high fire danger conditions—especially the warm and dry Santa Ana winds. A short film titled How Fast is Fast illustrated Smith’s point vividly: A wall of flame on a ridgeline visibly heaves forward in response to a gust of wind, engulfing the mountain in flame and smoke. An unnerved man cries out from off-screen upon witnessing this.

Another short film followed describing the LACoFD’s Ready! Set! Go! program. They emphasize creating a defensible 100-foot space around your home, hardening your home to embers, and having a personalized plan for evacuating early.

“What is the main thing people forget?” Smith asked attendees, “Medications.” He hopes residents will keep this in mind in the event of future evacuations.

Assistant Fire Chief Anthony Williams followed the presentation with a Q&A. Residents raised myriad concerns while also pausing to praise the first responders’ service and hard work. One such query concerned the future of firefighter volunteerism. Williams described a reserve program he proposed, which he hopes will emulate an established program in the sheriff’s department.

“There’s a huge paradigm shift within the fire organization after Woolsey. We recognize that because of the resources involved, we cannot be everywhere for everybody in a fire of that magnitude and we’re seeing a lot of people who want to become involved in their own fire brigades,” Williams said. “Many years past, we would have been less than receptive to that. Maybe that was hubris, but we understand that people want to be involved in their community and we’re working towards making that happen.”

Others expressed grievances over the confusion and miscommunications regarding horse evacuations. Volunteers outside Topanga offered their trailers for transport but could not gain access to the area. Many lamented SCE’s policy of Public Safety Power Shutoffs (PSPS) which prevented emergency information from being disseminated and left at-risk Topangans in the dark. Williams said that SCE is a private entity and could not comment beyond that. He noted that many of the responses regarding the Woolsey fire would need to remain vague until the LA County Board of Supervisors completes its comprehensive review of the event.

To further address the emergency power concern, a panel discussion led by O’Donnell sought to offer some alternative forms of communication and alternative power sources for keeping the internet, phone, and TV running during an outage.

“That’s why we’re having this session; to talk about other ways to get the information to you; not just rely on one way,” O’Donnell explained. “We have a lot of irons in the fire at this point on that topic.”

“What’s the life of an FRS radio?” one man asked.

“They’ll go out as soon as you actually need them,” quipped TCEP co-director Bryce Anderson, who stressed the need to have many back-up rechargeable and regular batteries on hand at all times.

In the Topanga Fire Safe Council presentation, co-Presidents Beth Burnam and Ryan Ulyate echoed Smith’s emphasis on the dangers of embers. According to Ulyate, national experts estimate that 90 percent of the homes lost in the Woolsey fire were ignited by embers. Through the council’s Home Ignition Zone Evaluation program, trained volunteers conduct a personalized assessment of risk factors in and around your home. Chief among them are leaves in gutters, birds’ nests, vents, and even dog doors.

“It’s the little things we can do,” Ulyate said. “We can make a difference.”

After viewing numerous videos of wildfire devastation throughout the afternoon, Simon T’s time-lapse footage of Firehawk helicopters swooping into action was a welcome salve. The LA County Fire Department’s Helistop 69 Bravo is located on 34 acres on Saddle Peak. Simon T reverently described how the LACoFD’s Firehawks can extract a thousand gallons of water in 60 seconds and perform nearly 40 of these extractions before firefighters arrive on the scene.

Pulling up a map of the progression of the 1993 Topanga fire, Simon T underscored its importance. “In less than a four-hour period of time the wind-driven fire traveled the entire Topanga corridor,” he noted. “The Los Angeles County Sheriff’s department estimates that it’s going to take at least seven hours to evacuate Topanga. So do the math.”

This stark reality elicited gasps from the crowd—one of many moments of palpable tension within the room.

The stakes could not be higher for Topangans. This event represented a crucial step toward developing collaborative community-wide efforts that could save lives and homes in the future.

To see the Ready! Set! Go! video and find out more about the LAFD program please visit https://www.fire.lacounty.gov/rsg/.

To sign up for a Home Ignition Zone Evaluation, visit ntcfsc.org.

What it Takes to be a Dad