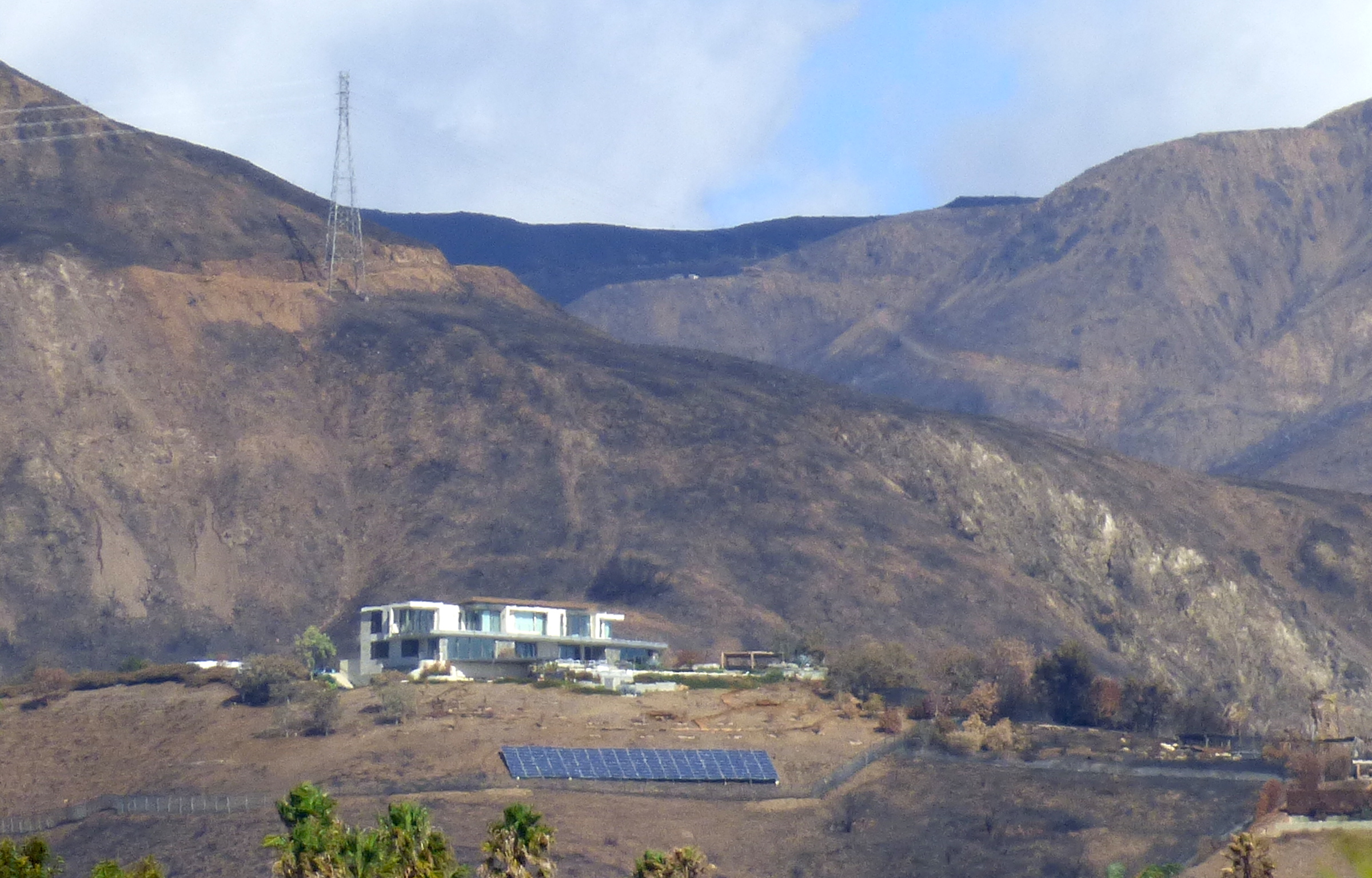 This house survived the Woolsey Fire. The one next to it did not. Mainaining defensible space is not a guarantee but it can help. Photos by Suzanne Guldimann 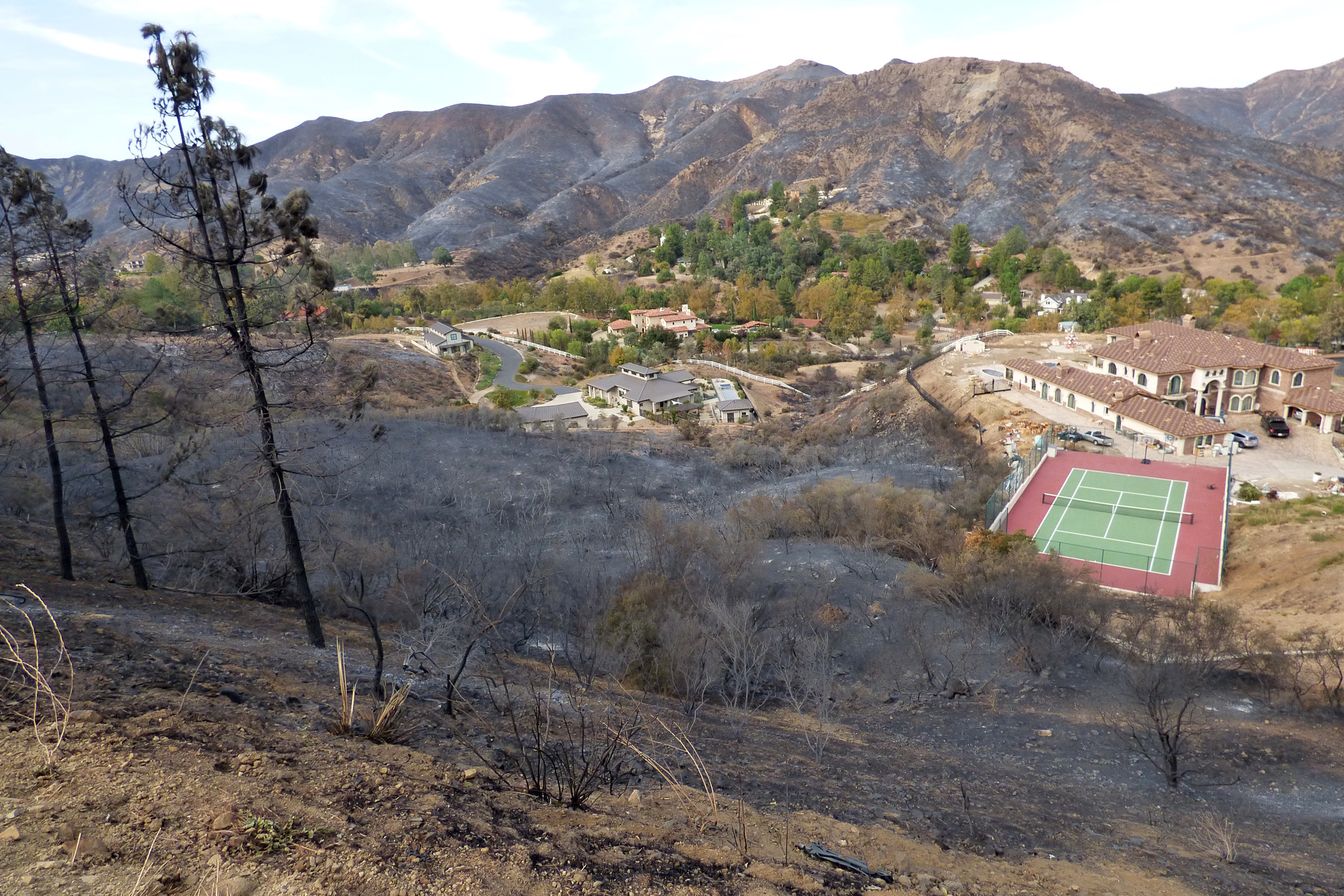 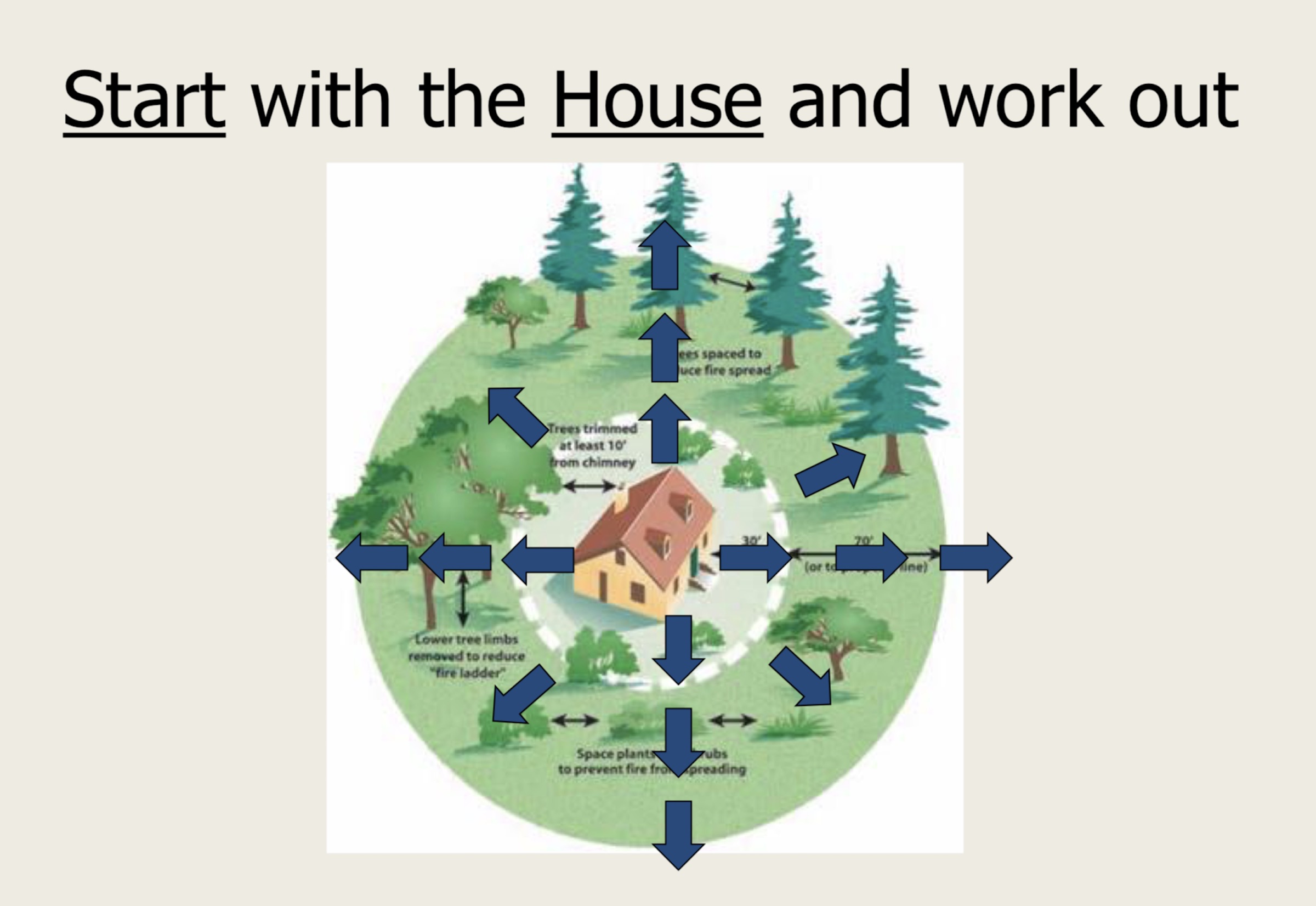 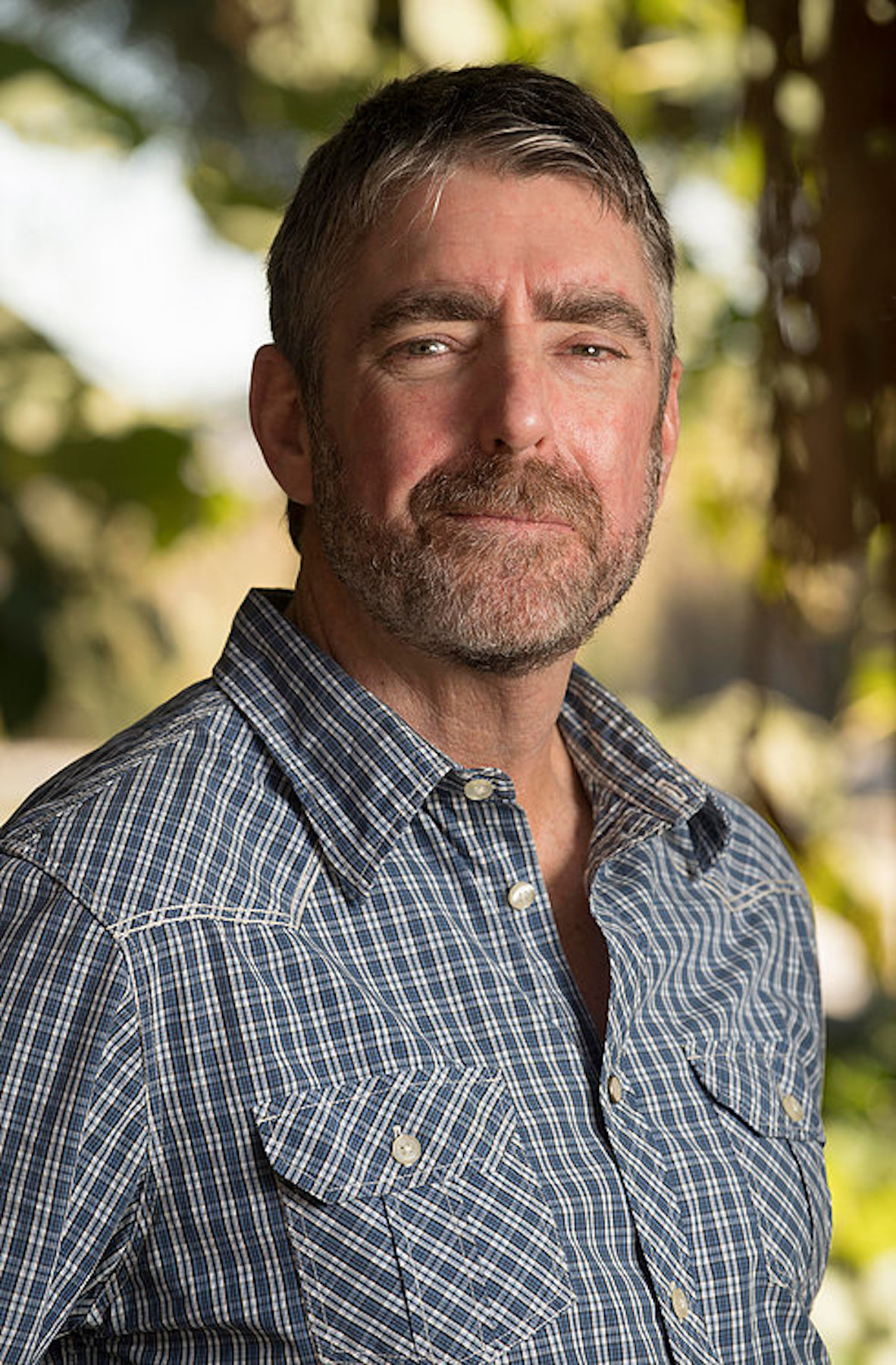 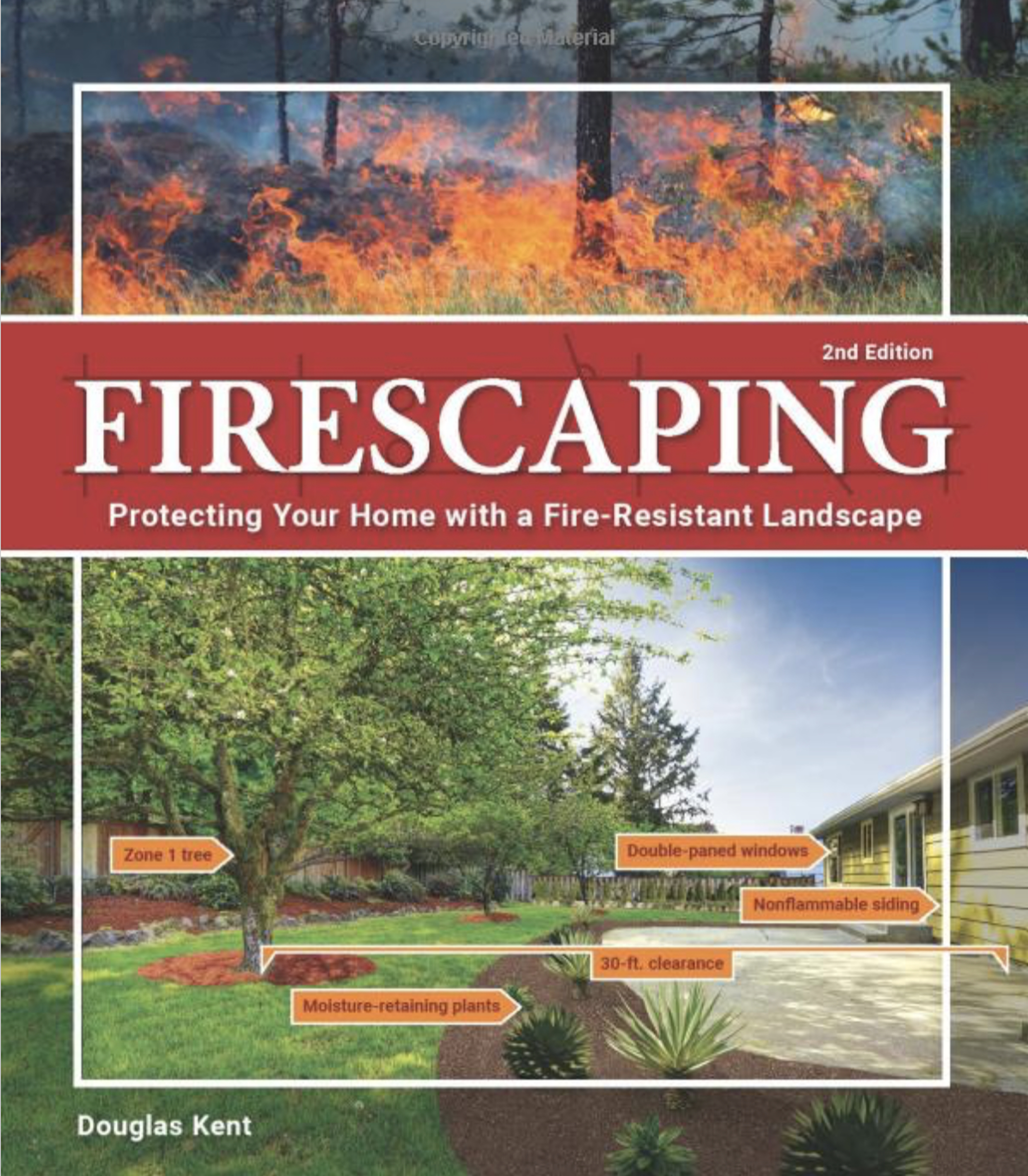 The Second Edition of Firescaping by Douglas Kent will be available on Amazon in October.

People living in Severe Fire areas are eager to learn their role in preventing fires and keeping their homes and neighborhoods safe. Two public agencies are helping them prepare.

Let’s face it. The Woolsey fire missed Topanga by a hair.

We live in fire country. Not just any fire country but fire country defined in superlatives: “Extreme,” “Severe,” and not just “Dangerous” but “Hazardous.”

We’ve recently experienced three small fires in the area within weeks of each other—The Cheney (vehicle) fire on July 26 that threatened the Community Center; the Palermo fire in Pacific Palisades on August 13; and the Sweetwater fire in Malibu on August 30. All were quickly knocked down thanks to early detection, mild to moderate winds, and quick response, but if we think we’re safe from fire, don’t. Complacency is our real enemy.

In its effort to counteract that tendency, Topanga’s water district, West Basin Municipal Water District 29, hosted a firescape presentation, based on firescaping expert Douglas Kent’s book, Firescaping: Protecting Your Home with a Fire-Resistant Landscape, on August 21 at the Topanga Library, to further instruct us on making our homes fire-resistant.

The next day, August 22, the Las Virgenes Homeowners Federation (LVHF) and LA County Third District Supervisor Sheila Kuehl presented “Fire Fact Forum: The Science of Fire” at the King Gillette Ranch auditorium. Both meetings were well attended and it was heartening to see how eager people were to heighten their awareness and understanding of their role as we face the growing threat of catastrophic fires in our communities.

“Before the meeting tonight,” Kent began, “I toured around Topanga.” Shaking his head, he said, “It’s not good.”

A murmur and some chuckles, went through the audience. Most of them know that what he had seen with his expert eyes were narrow, dead-end roads, cul-de-sacs, overgrown trees and brush crowding roads, and lots of debris and flammable plants too close to homes that, themselves, aren’t remotely fire-resistant.

“Small roads are death traps for firefighters,” said Kent, who has 35 years of horticulture and firescape experience, creating incentives, and teaching at Cal Poly Pomona. “A road wants to be a welcoming beacon to firefighters with places to turn around and get in and out.”

In his book, he writes: “The federal government actively provides and supports model laws and standards for vegetation management in fire hazard areas. However, it does not impose laws on private property…. Those are overseen by state, county, city, and community-association ordinances.”

“We don’t live up to the nature of the law,” Kent said. “There are over 8000 fires in California per year, 20 of which were the most destructive fires. Most laws are from the top down; we never had a grass-roots approach and didn’t motivate people.

“The Gold Rush came and people saw the land as a commodity. In 1950, Smoky Bear and fire suppression came along, a top-down approach. The attitude was ‘Employ It, Apply It, Suppress It.’ We need to invent a new way: roads, structures, defensible space, planting fire-resistant plants at our homes.”

“The WUI is an innocuous seam where the flammable woodlands meld into our urban features,”Kent said. “Fuel, heat, and oxygen are fire’s fundamental ingredients. Of these, the homeowner, business owner, or governing agencies can manage only one—fuel.”

In the book Kent writes, “Wildlands are defined as any large plot of land that is not maintained and where the vegetation can naturally grow and reproduce…. They endanger their urban neighbors only when the moisture in the plants drops to ignition levels.”

WHAT CAN WE DO?

Our first job is to allow firefighters’ access to the property. Homeowners give up a little to give everyone safety. Know your roads in and out. Living close to a main road is an advantage, but remote driveways in cul de sacs and on narrow roads will not be accessible to firefighters. After the Bel Air fire of 1961, the L.A. Arboretum conceived three concentric zones to create “Defensible Space” around homes.

Topanga is divided into nine evacuation zones, but Kent defines another set of zones: four areas around each home that should be iron-clad defensible space.

Kent’s presentation had everyone’s attention throughout the evening, and each of the event’s participants received  an advance copy of the second edition of Kent’s book, Firescaping: Protecting Your Home with Fire-Resistant Landscape, which will be released on October 8.

The book is available to pre-order at amazon.com ($21.95, hardcover; $19.64, paperback) and is highly recommended as an adjunct to homeowners’ efforts to keep their homes and neighborhoods safe.