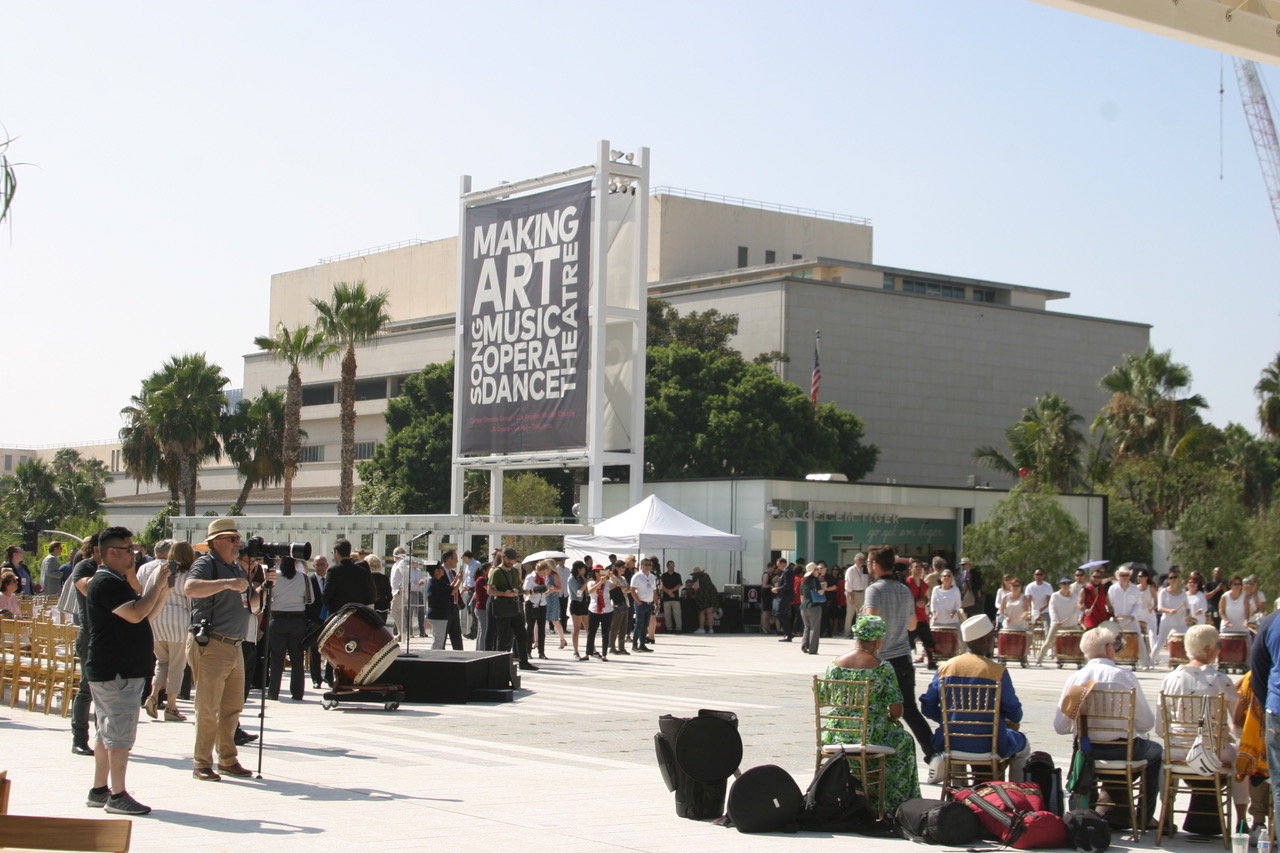 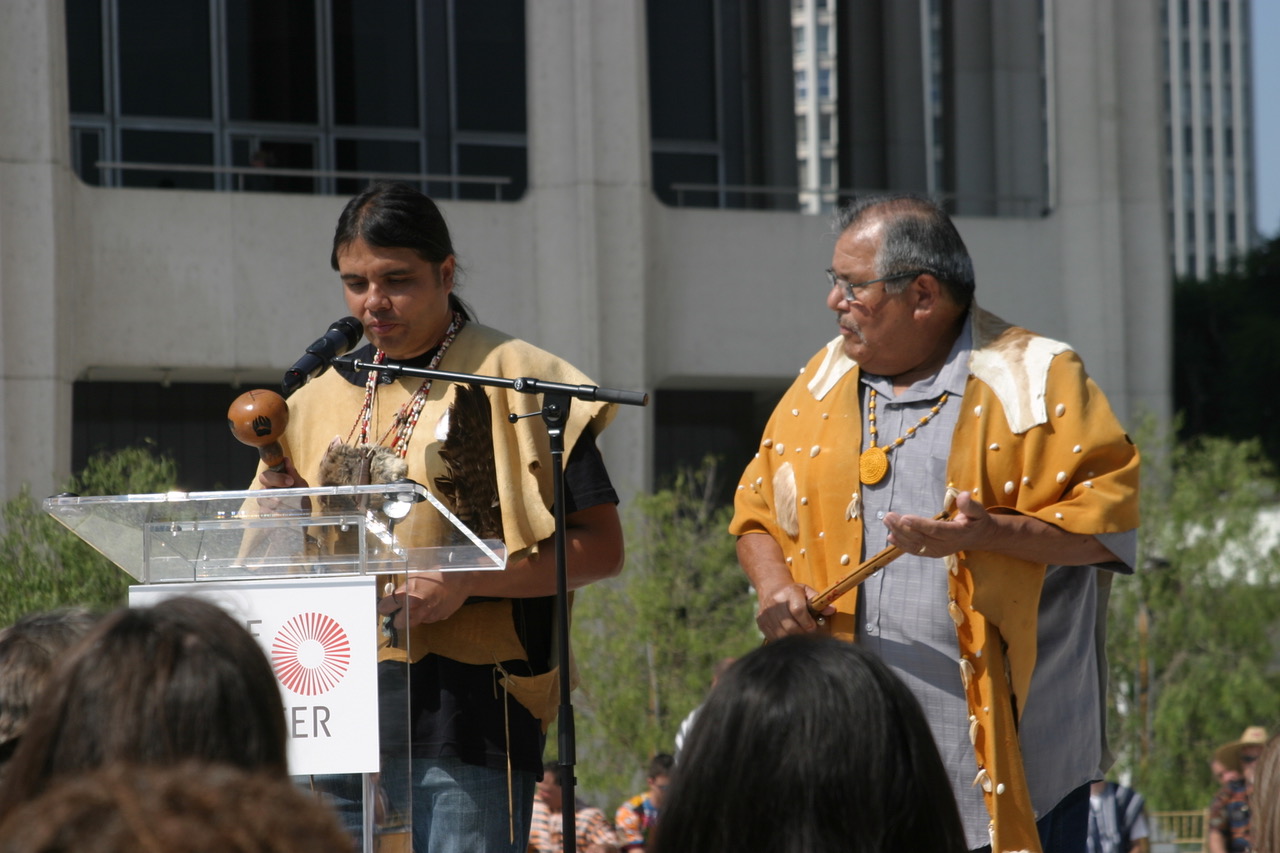 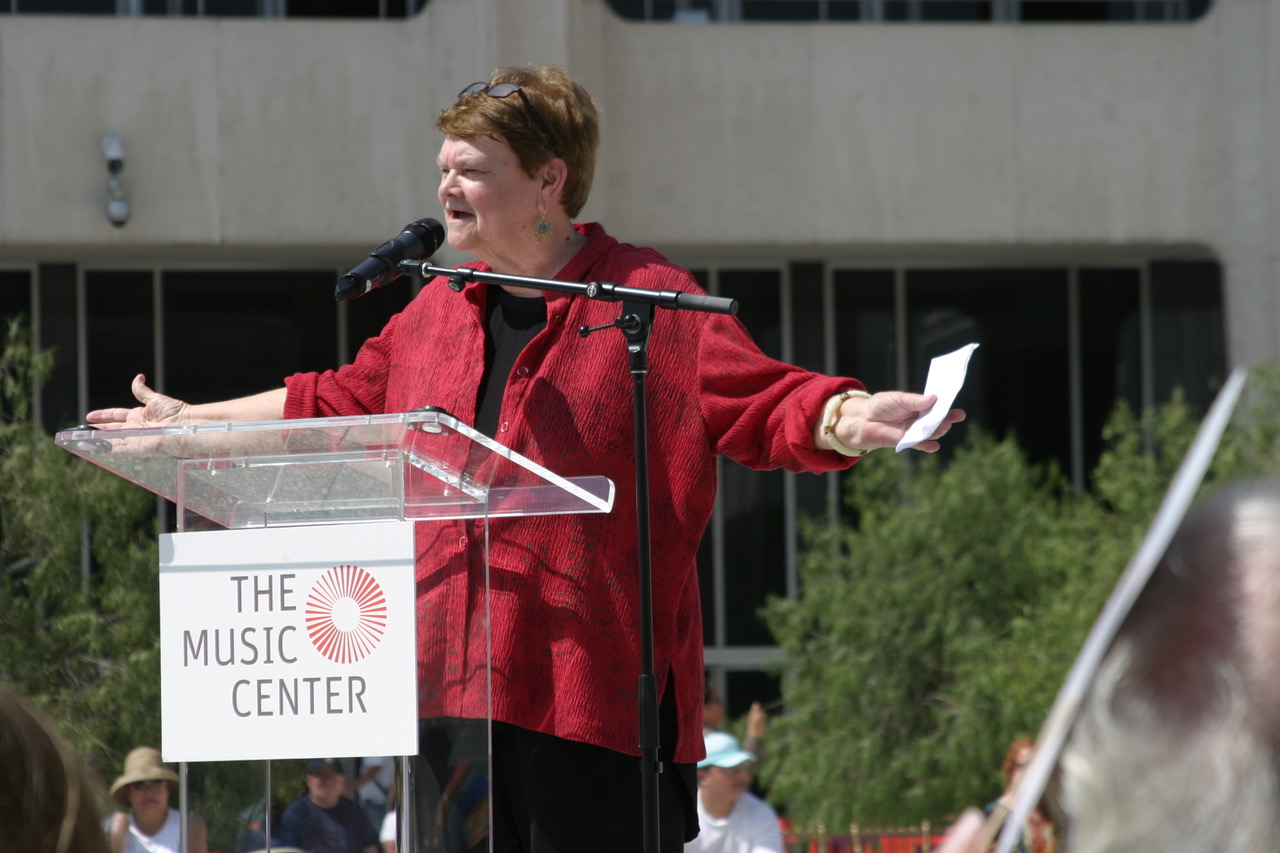 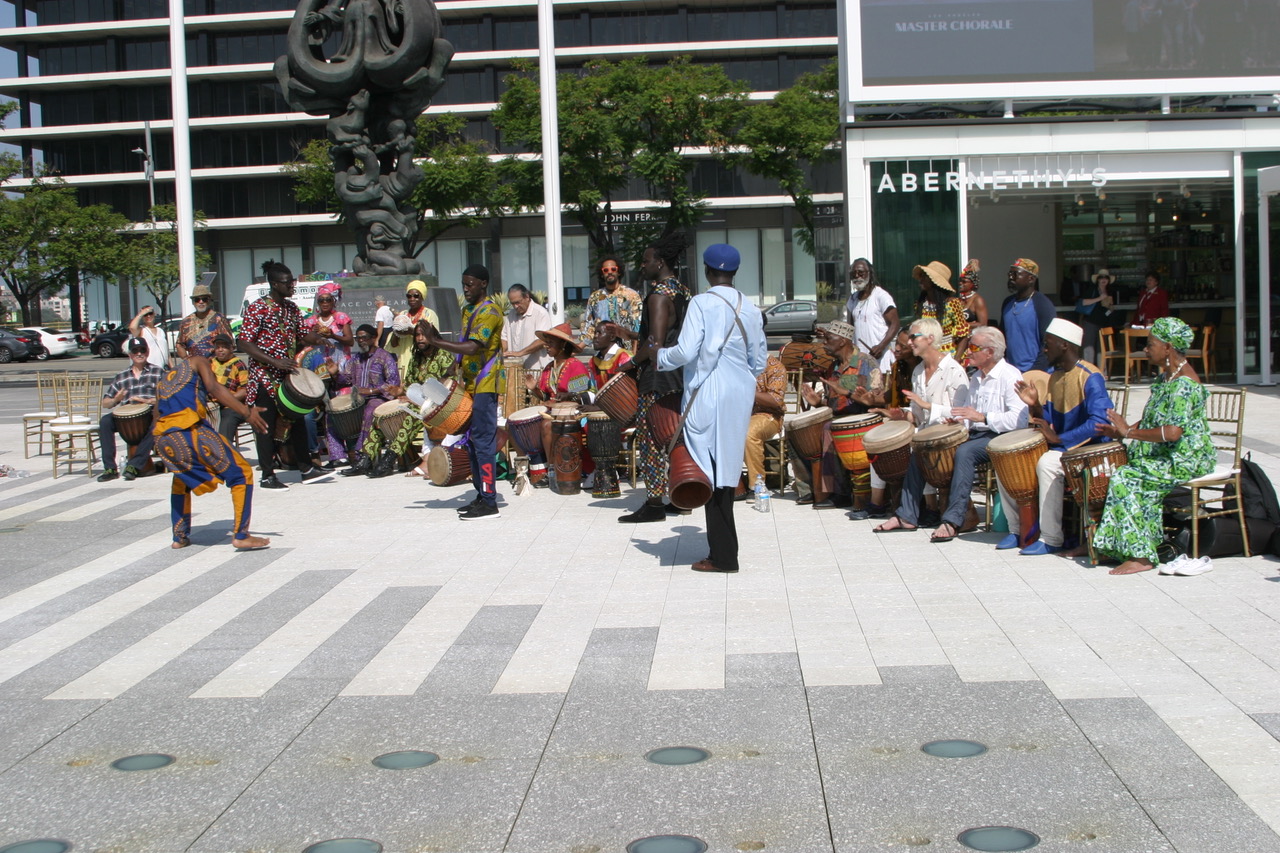 View of the Dancers Futo Toro. 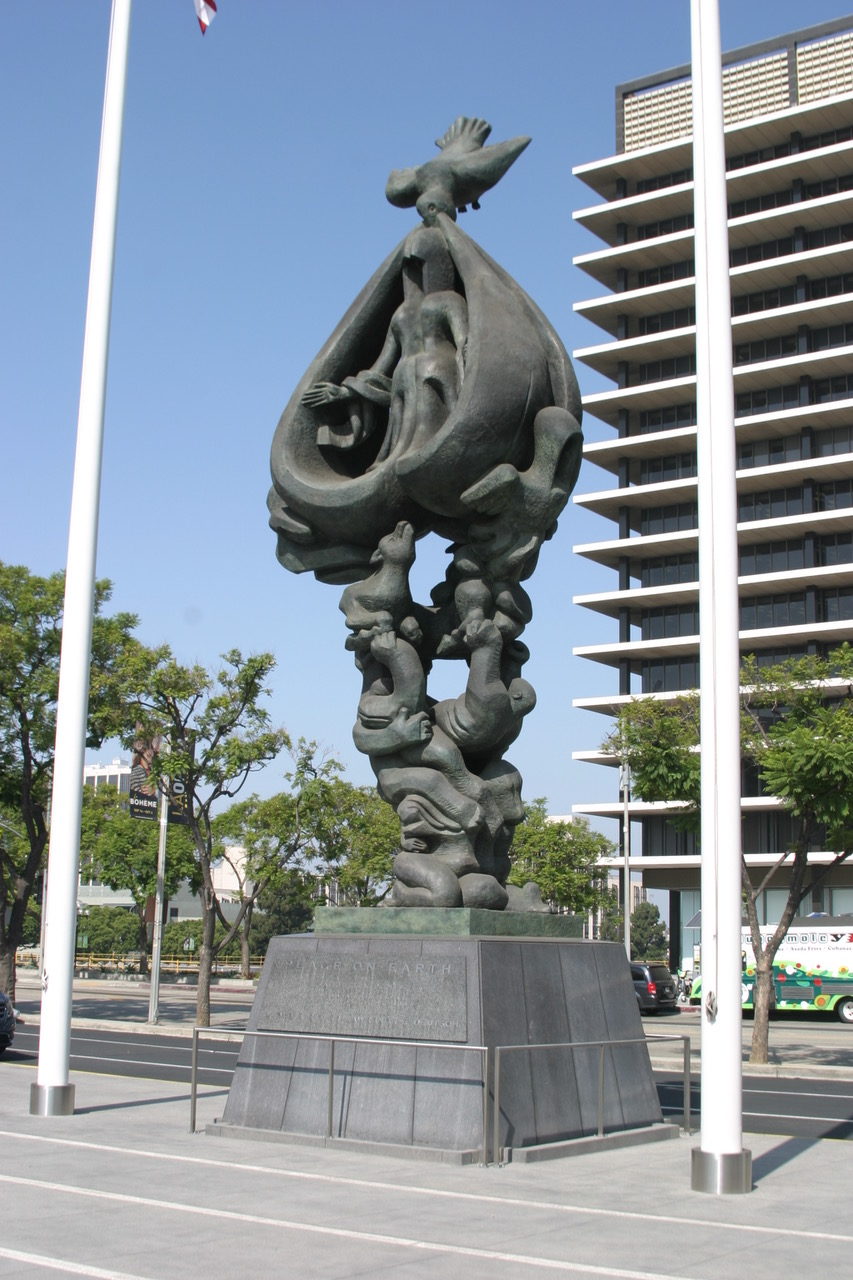 Jacques Lipchitz sculpture relocated onto Hope Ave. at the edge of the Music Center Plaza. 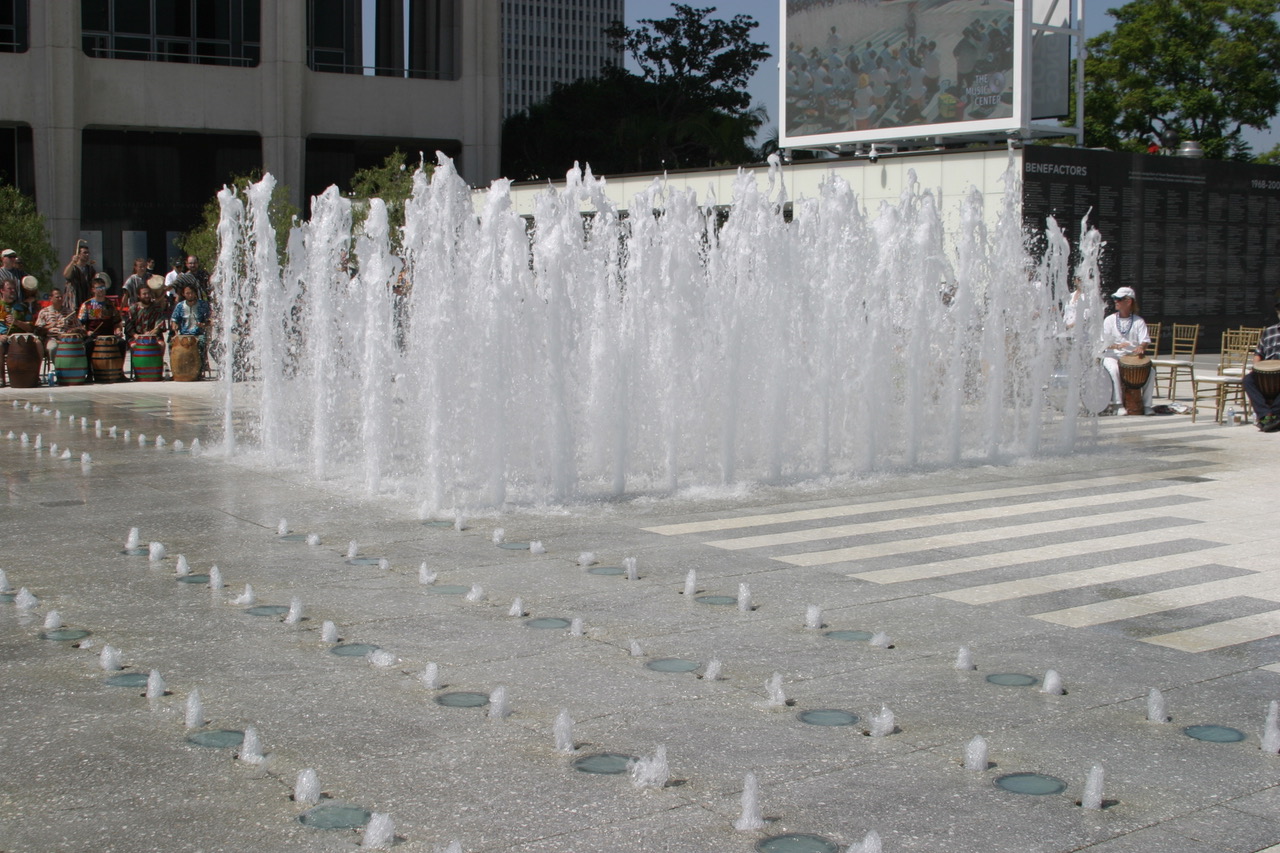 It was a moment of great civic pride when Music Center and Los Angeles County Officials gathered at the newly renovated Music Center Plaza for its official dedication on August 28.

Located between the Dorothy Chandler Pavilion and the Mark Taper Forum, the $41 million Plaza renovation took nearly two years to transform from a sunken hodge-podge with only a taco stand and overcrowded wine bar into an inviting open space to offer free and low-cost concerts and dances as a “plaza for all.”

The new Plaza makeover flattened and widened the space, doubling its capacity for events from 2,500 to 5,000 and now includes glass-covered elevators on both sides of the main staircase off Grand Avenue, a wine bar, a welcome center, a coffee shop, and permanent restrooms.

Rachel S. Moore, The Music Center CEO, welcomed the guests and spoke of the newest innovations to the Plaza, including its three new establishments—Abernethy’s, a full-service restaurant; The Mullin Wine Bar; and the Go Get Em Tiger coffee bar.

“This is our vision for a new Plaza,” Moore said. “It’s so exciting to see years of work become a warm and inviting place for people and families to attend free and low-cost programs.”

To dedicate the land, Chief Anthony Morales of the Gabrieleno Tongva San Gabriel Band of Mission Indians and his son, Andrew, led a prayer, a song, and performed a drum and sage purification ceremony.

Supervisor Hilda Solis, whose Second District includes the Music Center, and who was instrumental in spearheading the project, spoke of the newest venue for the Music Center to provide programs for the public.

“The Plaza has been transformed,” she said. “Los Angeles County made a sizeable contribution so New York, you better watch out!”

“Let’s give a great cheer for the Drum Circle,” she said. “I have been coming to the Music Center for decades and decades; it’s always been our number one performing arts venue in the County. Fifty years later, this Plaza can be a welcome and important asset [ that] celebrates our community and open space. As T.S. Eliot said, ‘Between the idea and action falls a shadow.’ Well, here, there are no shadows.’”

Lisa Specht, the chair of the Music Center’s Board of Directors gave a big thank you to all who attended. “[The Plaza] will, in effect, be the Music Center’s Fifth venue because it is perfect for music, shows, dance, and community happenings that are free or low-cost for every person in Los Angeles to be welcome here,” Specht said. “This Plaza will broaden access to the cultural life for every resident of Downtown Los Angeles; it will be the cornerstone in our music center.”

The Plaza redesign was headed by Rios Clementi Hale Studios who lifted up a previously sunken area of the plaza and removed the steps from all four sides. Bob Hale, RCH Studios Creative Director and architect, said the plaza is now, finally, “a unified, universally accessible space.”

Hale noted that they also relocated the Jacques Lipchitz “Peace on Earth” sculpture from the plaza’s fountain to a space on Hope Street. The popular Music Center fountain, which sits in the center of the plaza, was also transformed and now includes 140 colored lights.

Legendary chef Susan Feniger (Border Grill) welcomed the addition of the eateries on the Plaza and spoke of the excitement to come with a host of guest chefs to helm the kitchen at Abernethy’s restaurant.

“There are so many great chefs to get out in front of the public,” Feniger said. “We can rotate the plays with the chefs.”

After the dedication, Supervisors Solis and Kuehl pounded a giant Taiko drum as the Music Center’s iconic fountain sprang to life amid the sound of 120 drummers and percussionists to officially dedicate the Plaza for all.

“Look at this fabulous dream we have,” Solis said. “This is a warm and inviting space to make art accessible to everyone; this Music Center is for you.”