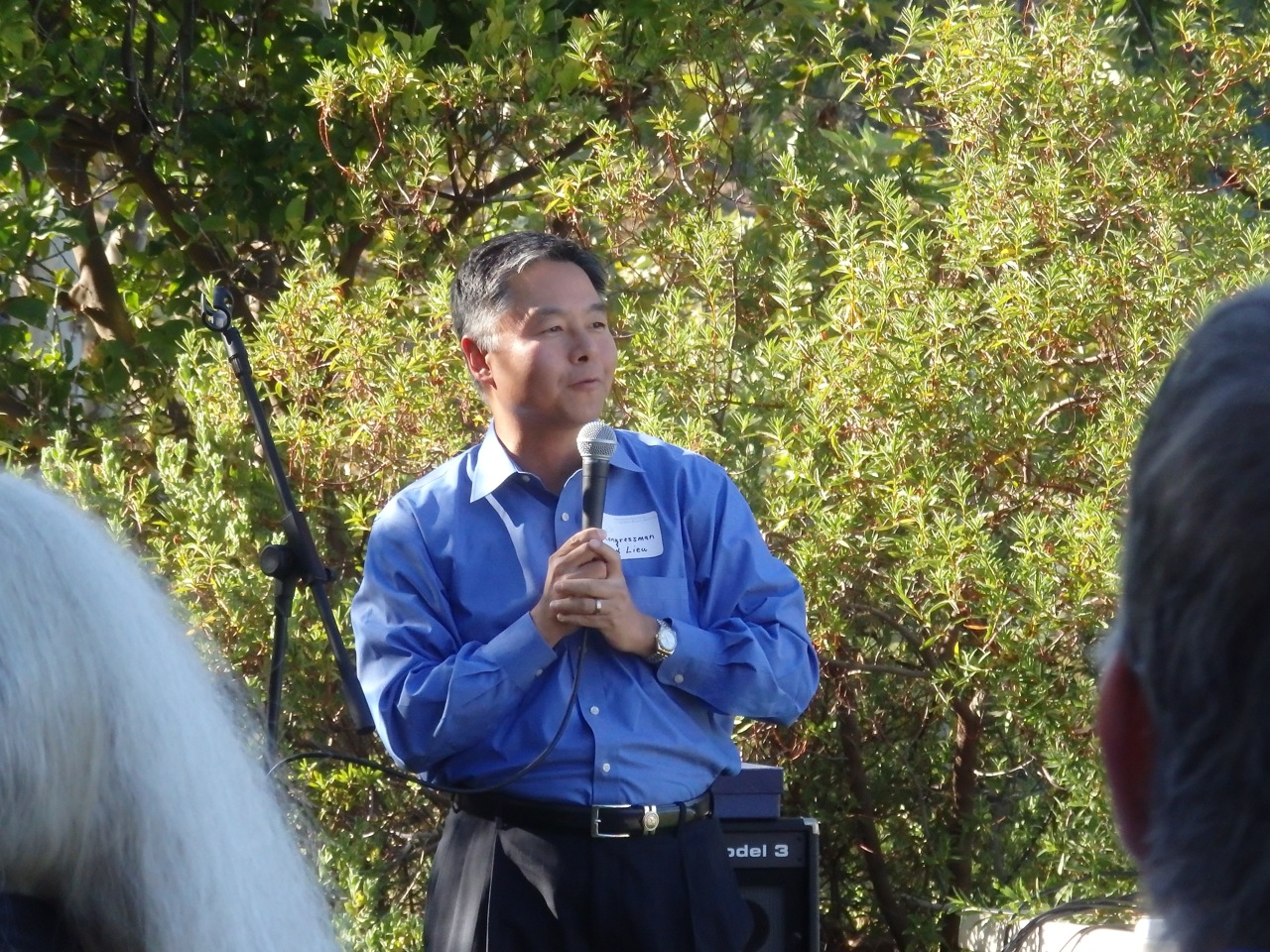 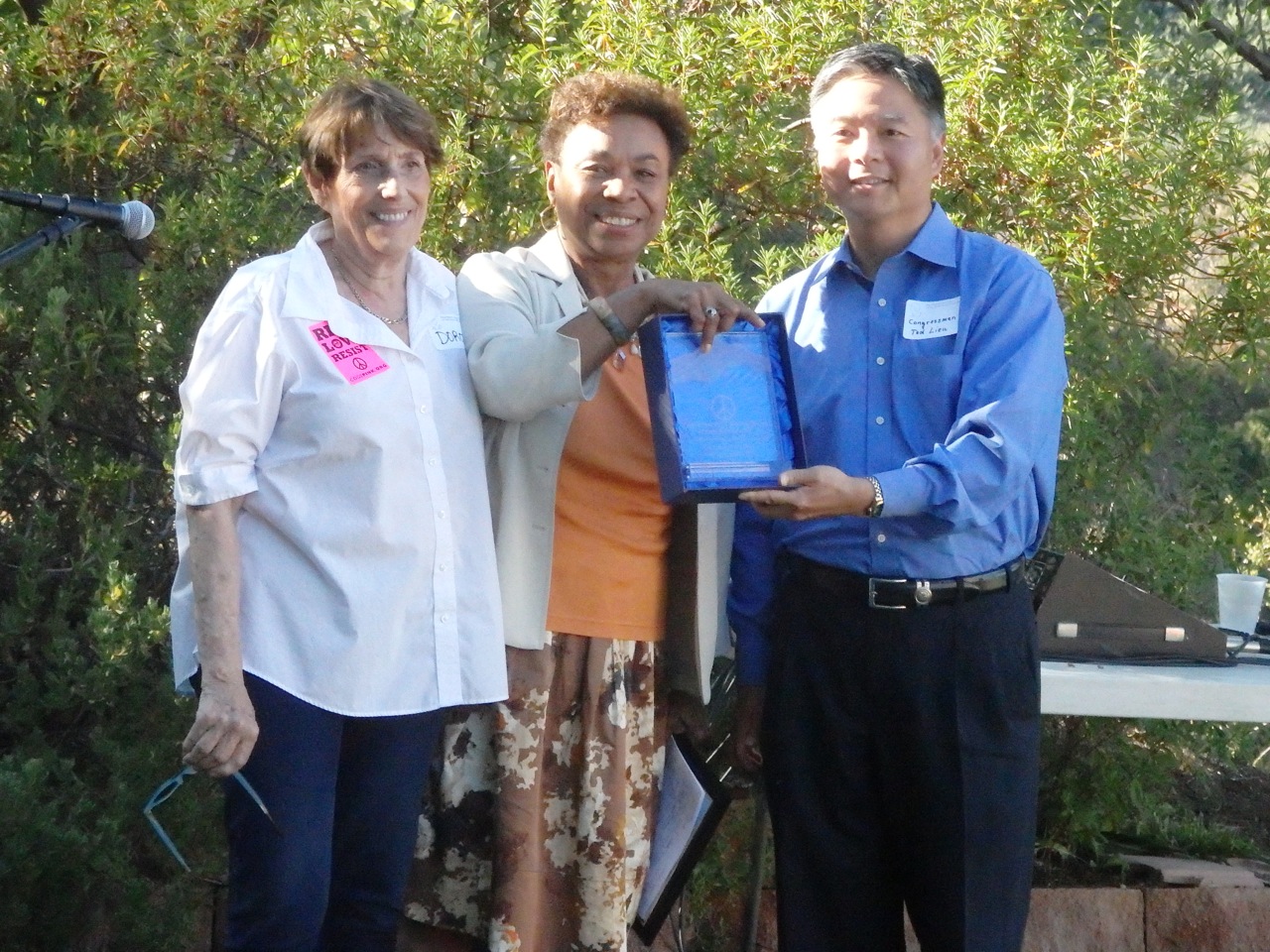 Rep. Barbara Lee, center, accepts the "Inside the Party" award from Dorothy Reik, President of the PDSMM and Rep. Ted Lieu. Photo by Annemarie Donkin 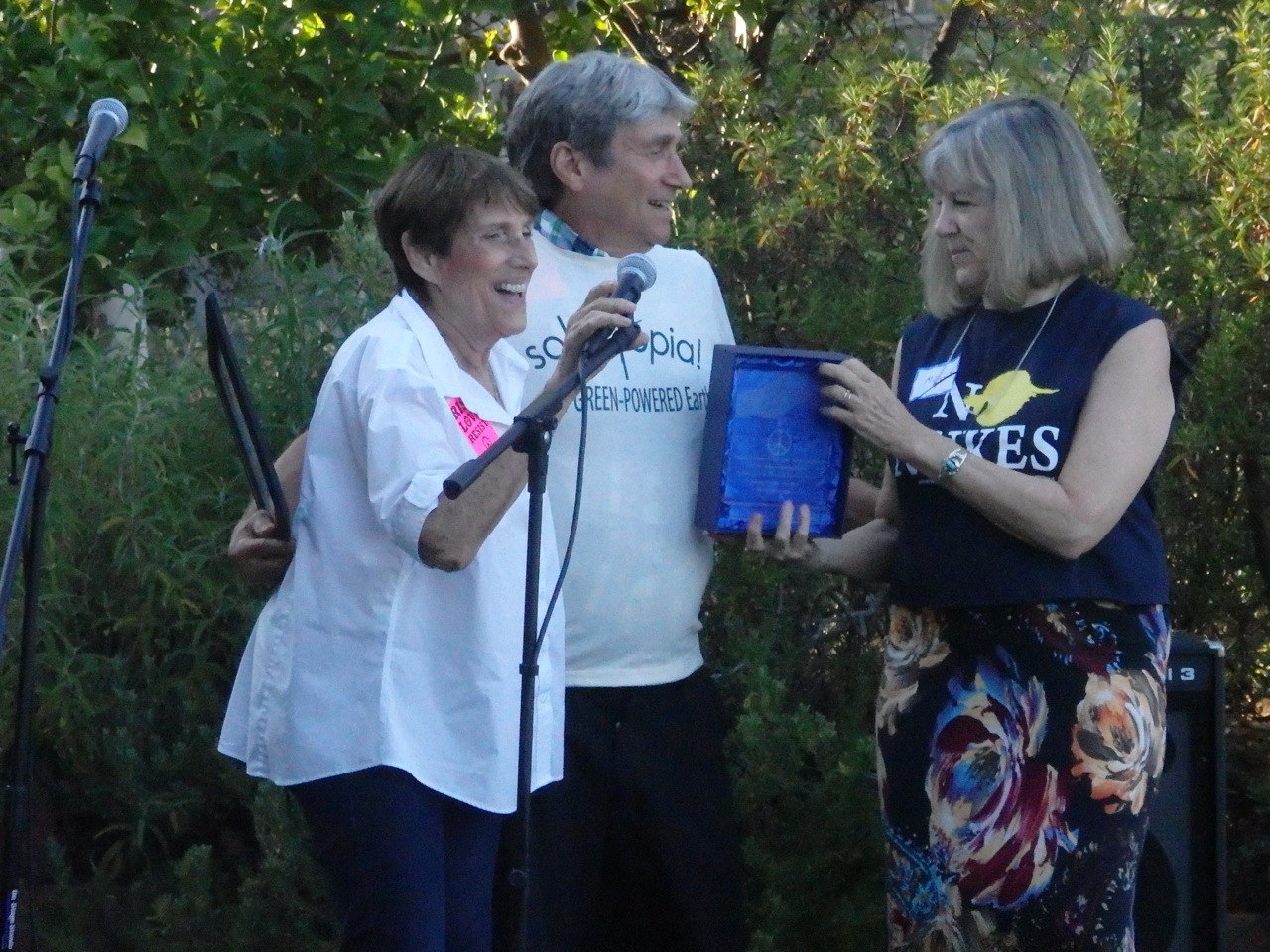 Political activist Harvey Wasserman accepts the "Outside the Party" award from Dorothy Reik, President of the PDSMM and actor and activist Mimi Kennedy. 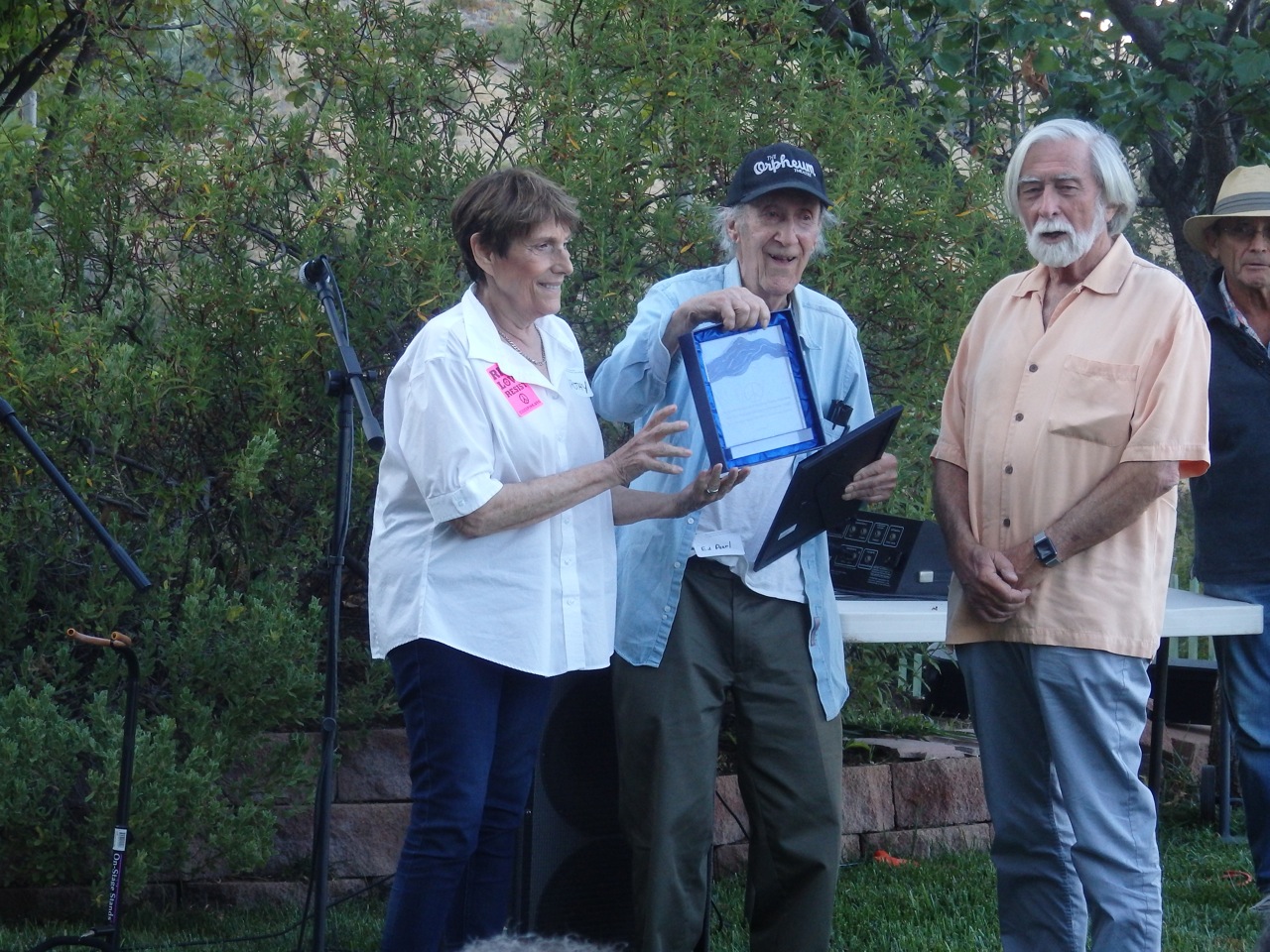 Ed Pearl, center, founder of the Ash Grove that stood on Melrose from 1958 to 1973, received a "Lifetime Achievement" award for his work in music and politics from Dorothy Reik and Robert Scheer of Truthdig. 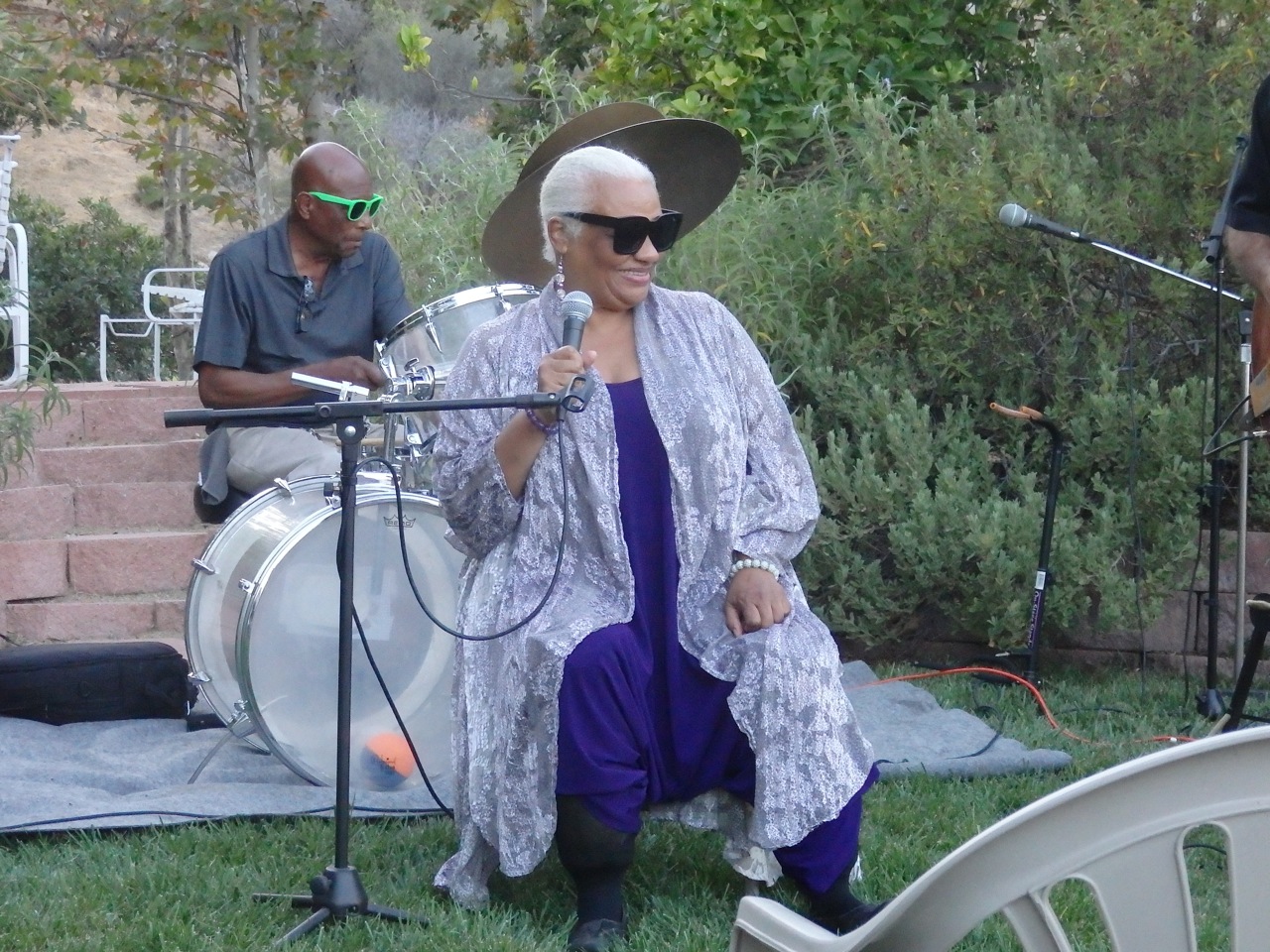 It was a gorgeous day with a full house of nearly 200 people as the Progressive Democrats of the Santa Monica Mountains (PDSMM) celebrated its twelfth birthday and honored Rep. Barbara Lee, Harvey Wasserman and Ed Pearl for their extraordinary courage and political activism.

PDSMM President Dorothy Reik again graciously hosted the event at her home high on Saddlepeak Road with a spectacular view of the mountains and Santa Monica Bay.

First up, Congressman Ted W. Lieu presented Rep. Barbara Lee with the “Inside the Party” award for activism in the pursuit of Environmental Justice.

Lieu said Barbara Lee was the only House member to vote against the Authorization of Military Force (AUMF) in Afghanistan three days after the 9/11/2001 attacks.

“She felt it would be giving Congress a blank check for future conflicts,” Lieu said.

After Lee accepted her award, she insisted that the House must pass H.R. 669 to prohibit the conduct of a first-use nuclear strike absent a declaration of war by Congress. Lee spoke of her history working with the Black Panthers and about how the great Shirley Chisholm mentored her to become an activist “inside the party.”

Quoting Chisholm, she said, “If you believe in what you say you believe in, then get inside and register to vote!” She told the group, “I became an instant Party person so I can help move the DNC in the correct direction.”

Actress and activist Mimi Kennedy (“Mom”) then presented Harvey Wasserman with the “Outside the Party” award.

Wasserman is a life-long activist who speaks, writes and organizes on energy, environmental issues, history, the war on drugs, elections and the importance of grassroots politics.

“He knows the value of air, water and land,” Kennedy said of Wasserman. “He brings his heart to politics; he believes California can soon rely entirely on renewable energy (solartopia.org).”

Wasserman took the stage and railed against the fixed and dirty 2016 election and promoted his newest book on the subject, “The Strip & Flip Disaster of America’s Stolen Elections,” which he wrote with Robert J. Fitrakis (CICJ Books).

“What’s hard with Trump is that he exists at all,” Wasserman said. “I have never met anyone like him, He’s crazy. It’s difficult for all of us, so hug each other, use your compassion and common sense. We have to cope with it; we are the hope, joy and love.”

To complete the awards ceremony, Robert Scheer of Truthdig presented legendary activist and music impresario Ed Pearl of the Ash Grove with the “Lifetime Achievement” award.

For 15 years, from 1958 until 1973, the Ash Grove on Melrose was the place to go in Los Angeles for live folk and blues music. According to online sources, the club was a locus of interaction between older folk and blues legends such as Pete Seeger, Mississippi John Hurt, Earl Hooker and Muddy Waters and young artists who produced and created the ‘60s music revolution.

The Ash Grove was also a hub for political activism, a meeting place for Black Panthers and departure for buses taking young activists to the South.

“I brought great artists together,” Pearl said. “I found that I could use music to combine artistic talent with political activism—I transformed people.”

After Pearl spoke, Ash Grove players “Get Lit” presented some radical poetry. Then, Jazz superstar Barbara Morrison and her band closed with a spectacular set.

Progressive Democrats of the Santa Monica Mountains is a chartered club of the Los Angeles Democratic Party. In 2013, Dorothy Reik was elected to the Board of the Progressive Caucus of the Democratic Party, several members of whom are delegates to the California State Party Central Committee.

When asked what they endorse now during the Trump Administration, Reik said she is trying to get the Democrats on board with the RefuseFascism website.

“We will be working to elect Katie Hill to replace Rep. Steve Knight (25th District in the Santa Clarita Valley) among other races.  My friend is running the Randy Bryce campaign against Paul Ryan and we are trying to get California even bluer!”

Reik said the PDSMM is still working on getting single payer health coverage in California and a fracking moratorium (still pending). Ongoing issues include opposition to Arctic drilling; support for raising the minimum wage; passing the Equal Rights Act for women; support for the Iran deal; opposing the XL pipeline; opposing a ridgeline development in Calabasas; and supporting renewable energy.