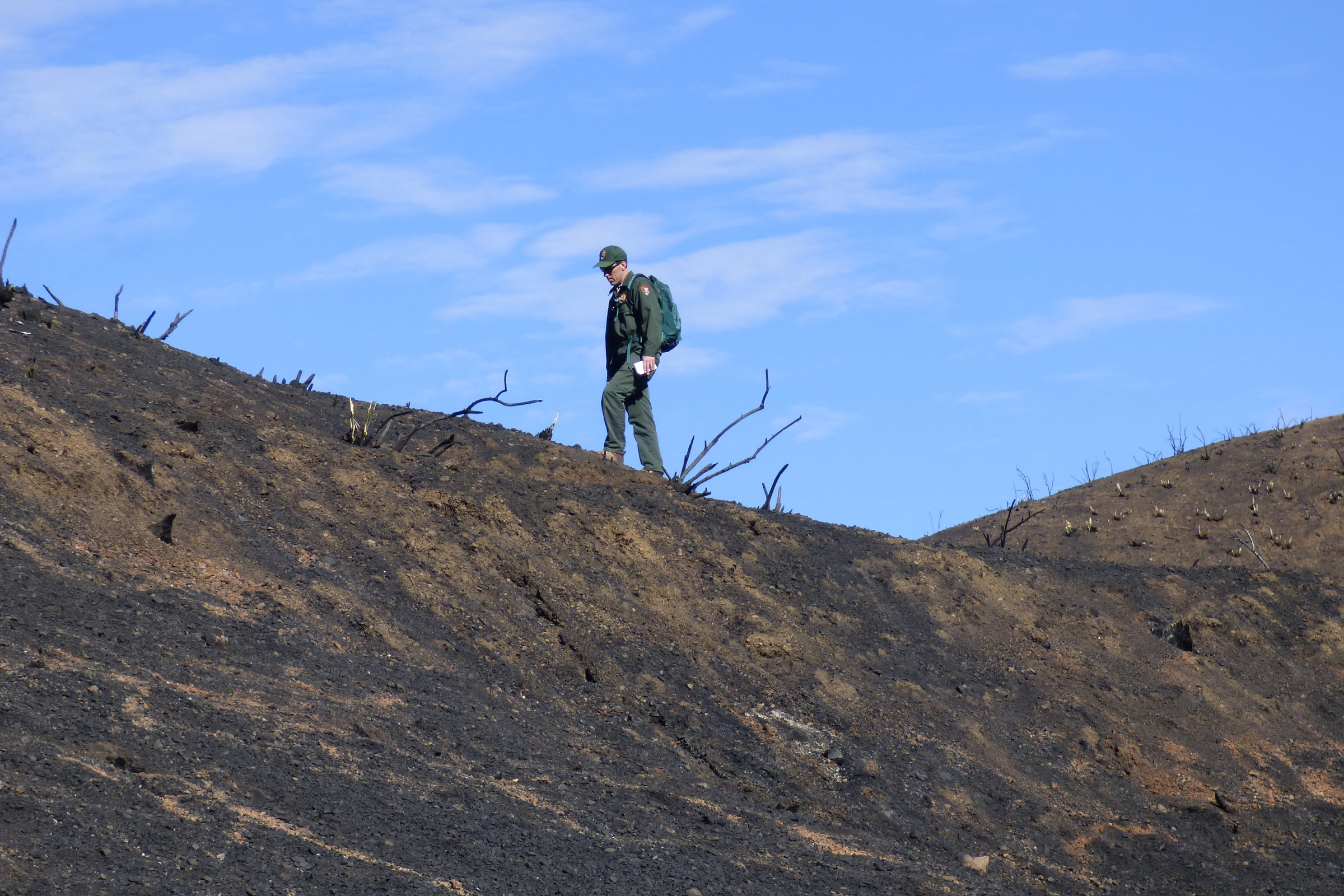 Mark Mendelsohn at work. One of the biologist’s jobs will be to closely monitor recovery on National Park Service land in the Santa Monica Mountains. Photos by Suzanne Guldimann 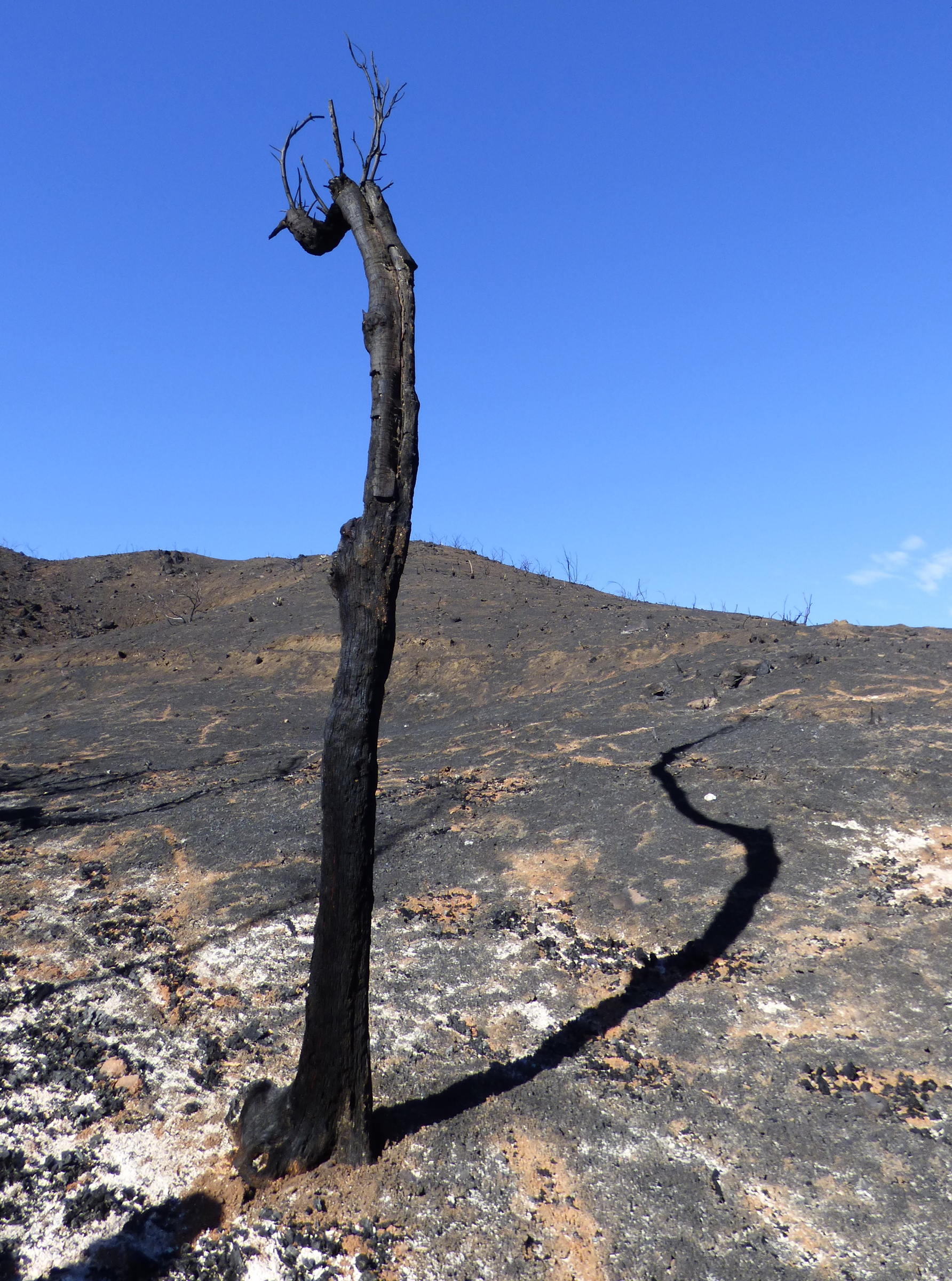 It’s hard to imagine anything alive in this desolate landscape, but plants are already beginning to grow. If the Santa Monica Mountains continue to receive rain this winter, and the rain isn’t so intense that it washes away germinating seeds, spring will bring fire following wildflowers to the burn scar, and native trees and shrubs will have an opportunity to begin recovery 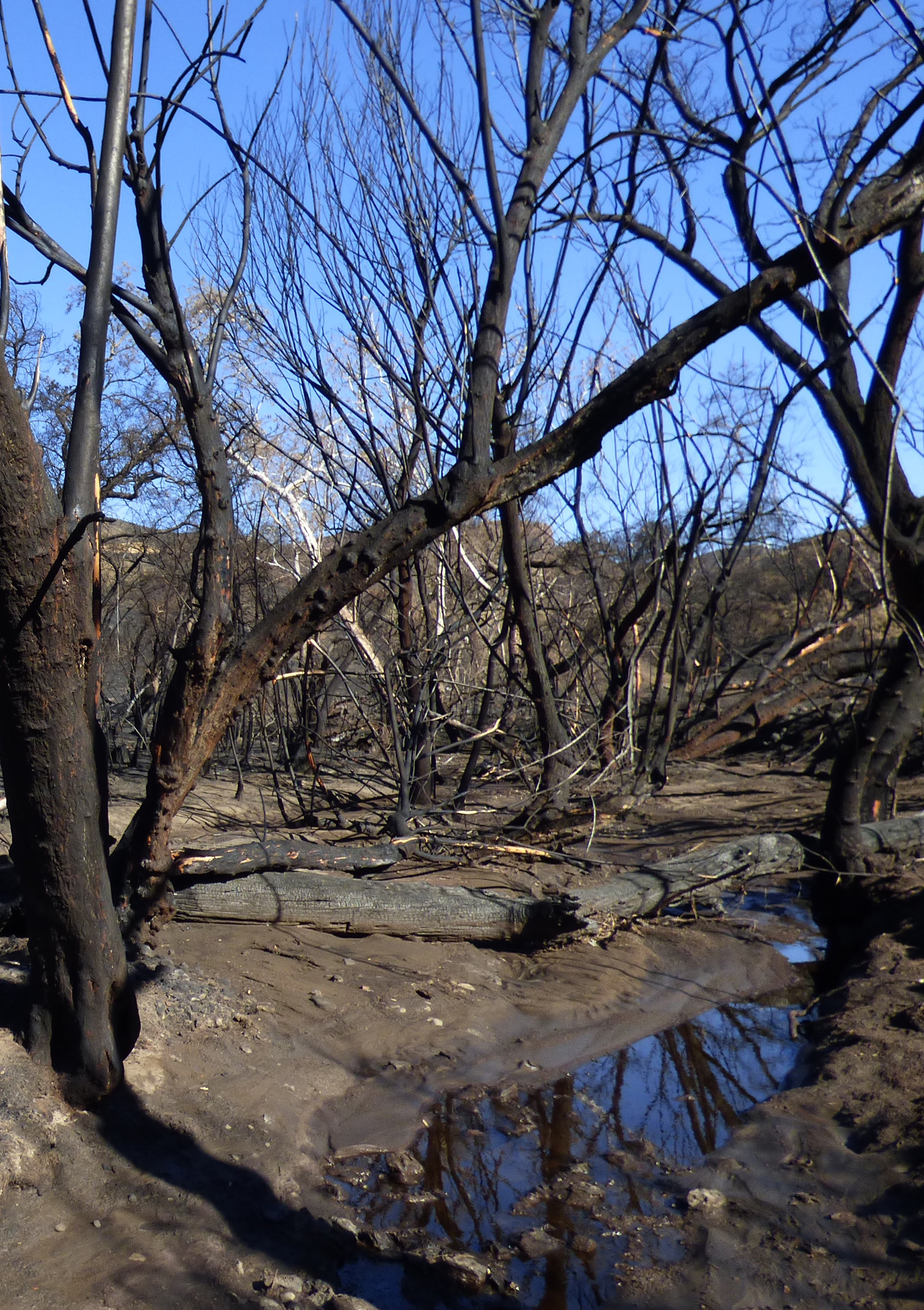 Trancas Creek, looking for all the world like a winter woods back East after a winter thaw, instead of the aftermath of a hellish conflagration. According to Mendelsohn, the oaks and willows in this area have a good chance of recovering. The fire burned their leaves and branches, but did not kill the core of the trees. 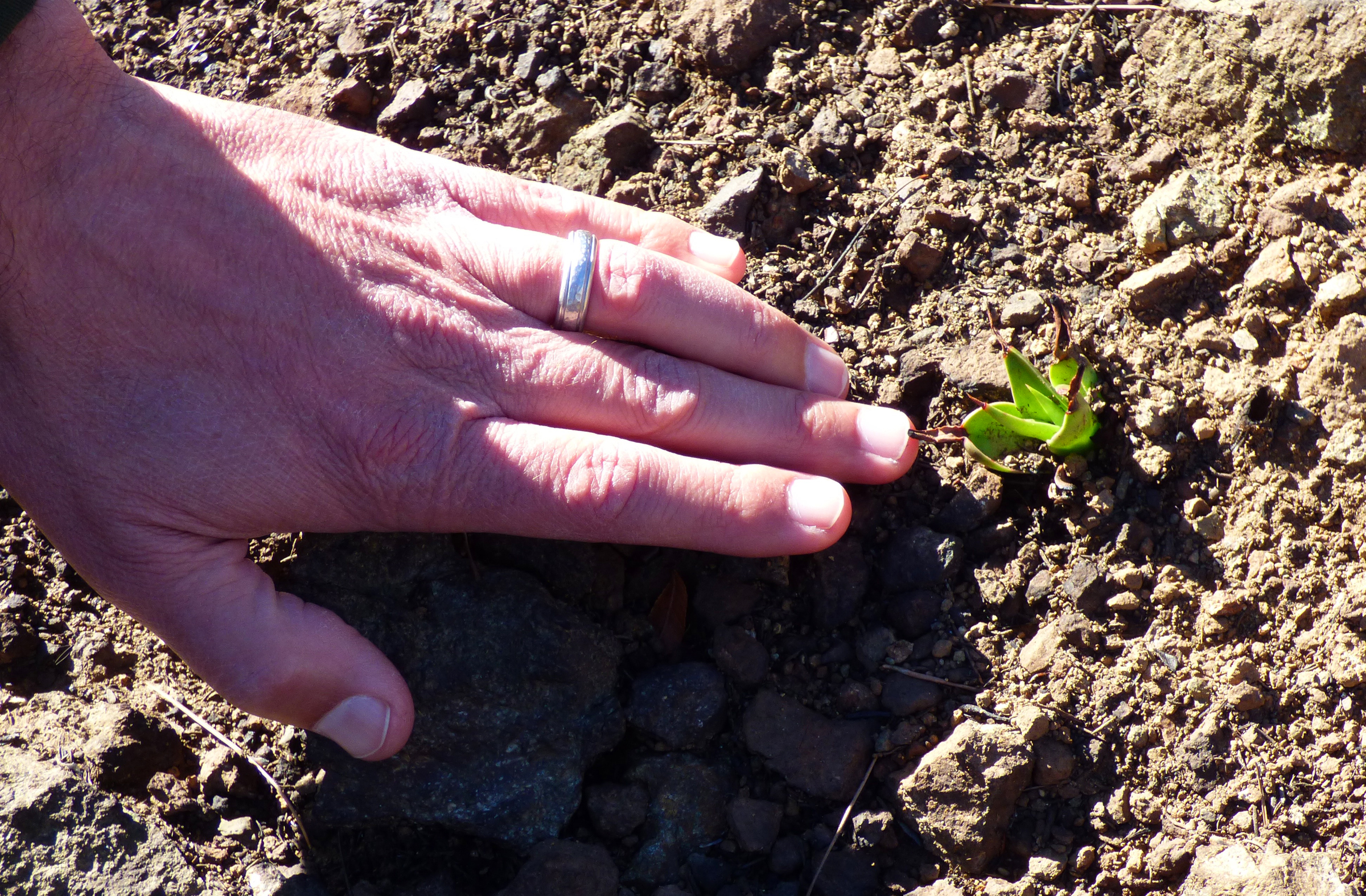 The National Park Service vegetation biologist points out a tiny new sprout of lance-leaf live-forever, a native succulent in the dudleya family. 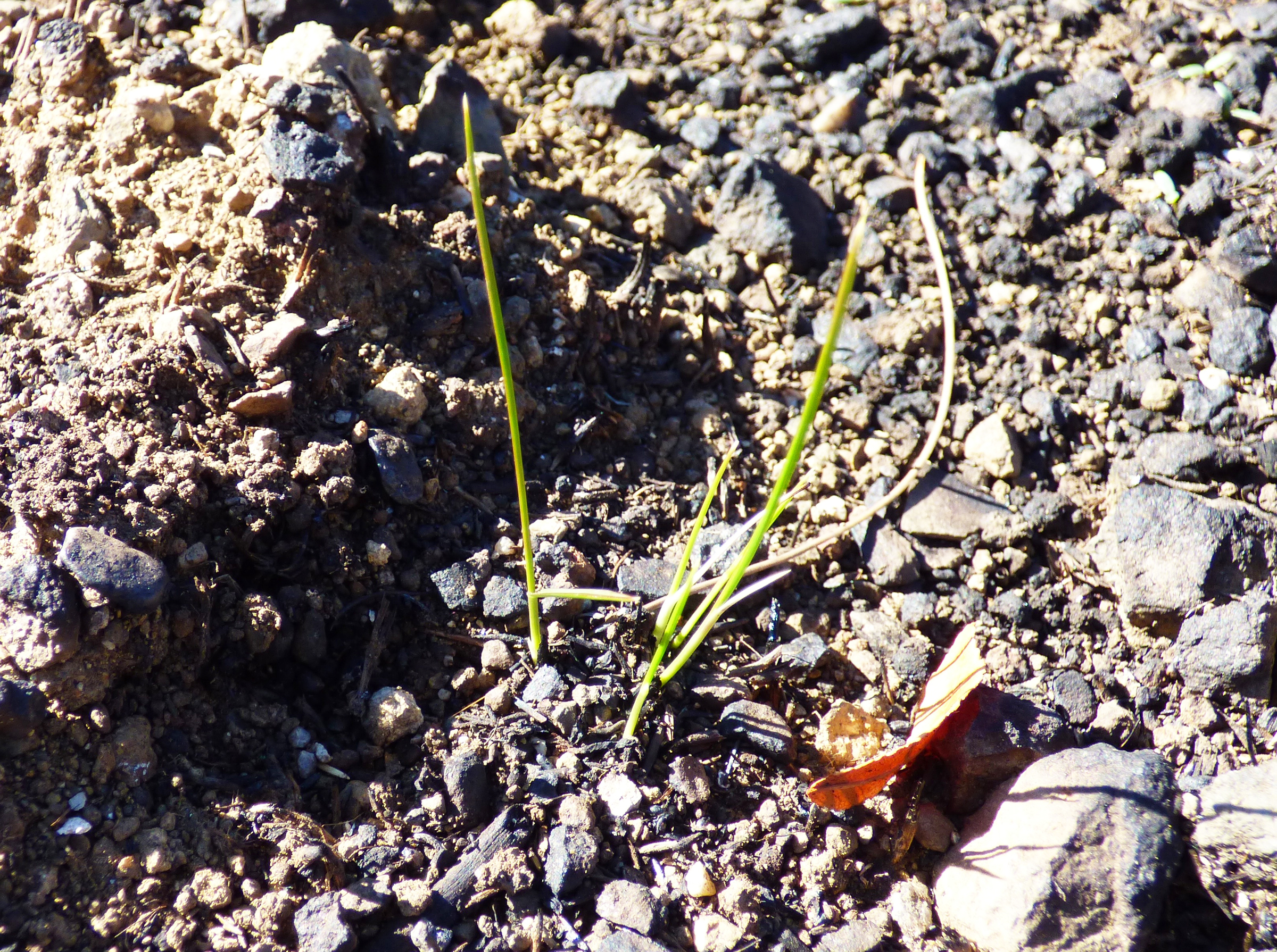 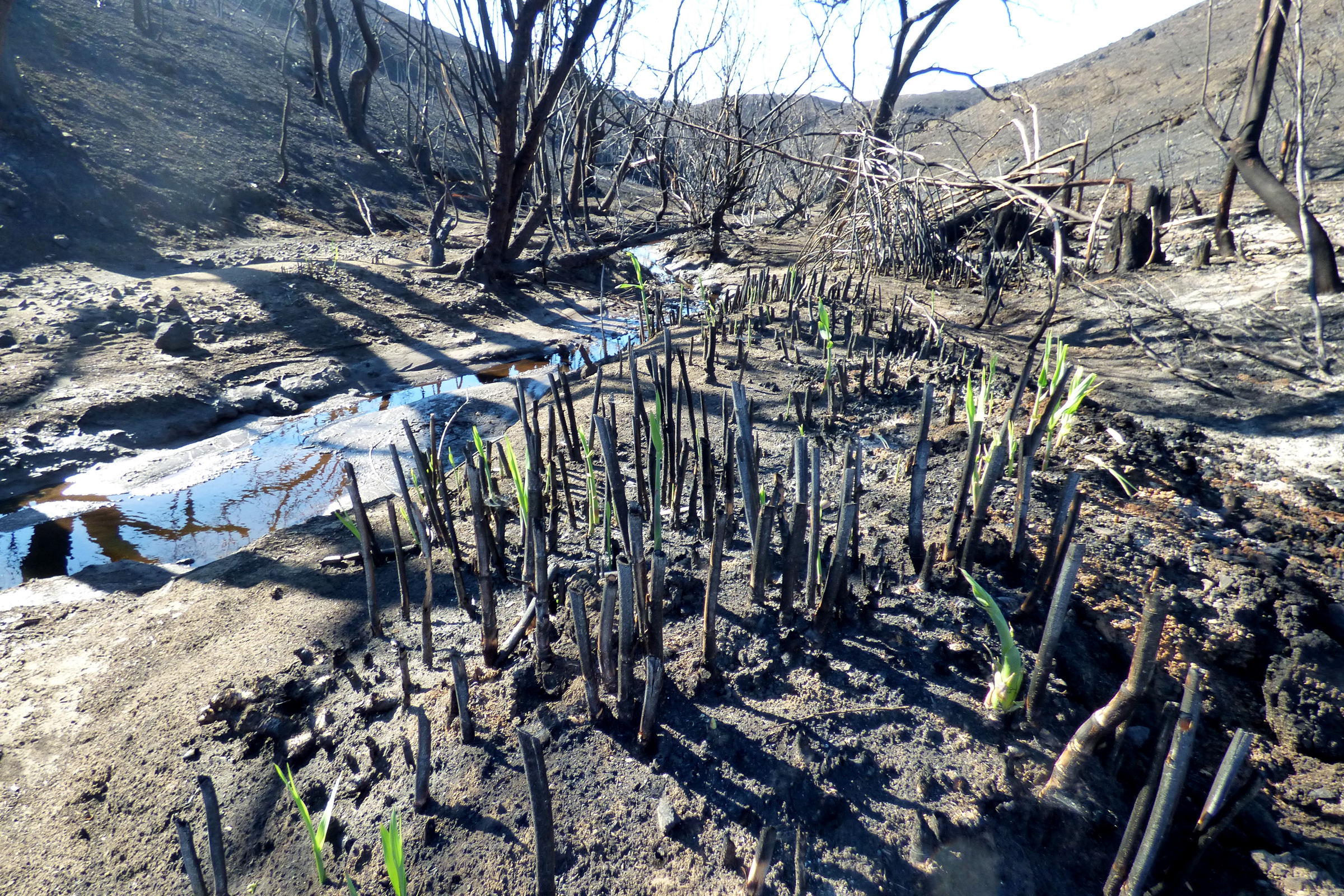 Green spears of arundo, an invasive species, are quick to regrow after a fire, giving this unwelcome invader an advantage over native plants. Arundo spreads by a dense network of roots, making it difficult to eradicate, and helping it to withstand disasters like wildfire. 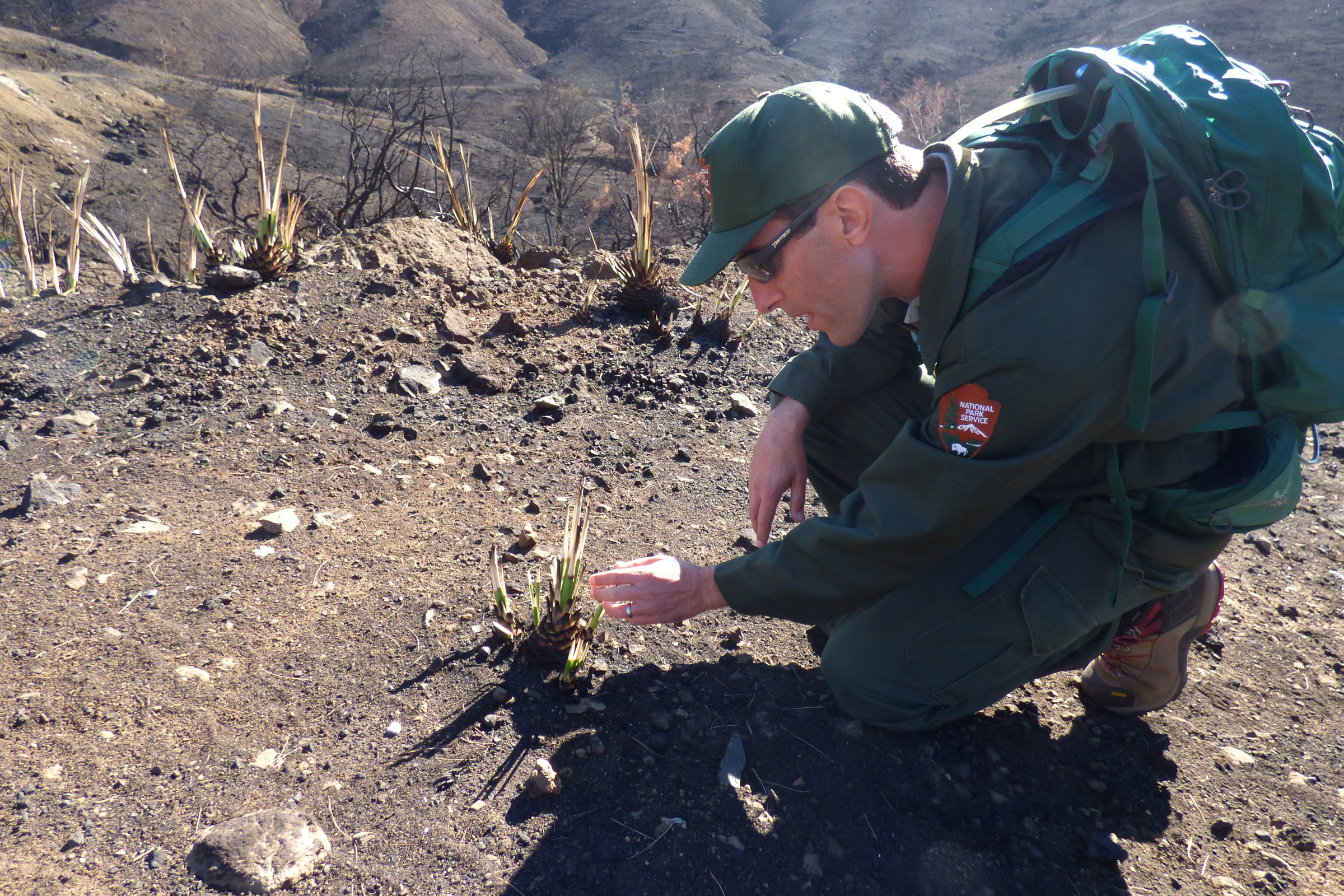 Mendelsohn points out new growth on a yucca, one of the first native plants to regrow following wildfire.

The mountains in the Woolsey Fire burn scar area may look as desolate as the dark side of the moon, but beneath the ashes new life is already stirring. The National Park Service is already at work documenting the aftermath of the Woolsey Fire and the first signs of rebirth and regrowth of native and invasive plants.

The Messenger Mountain News had the opportunity to accompany National Park Service vegetation and wildlife biologist Mark Mendelsohn into the field at upper Trancas Canyon to look for regrowth. Even though the fire occurred less than month ago at the time of the visit, and the area was so hard hit that the road into the site remains closed, the re-greening of the burn zone had already begun.

The field trip was ostensibly to show reporters how two species of plants were already beginning to regrow, but a few minutes of searching turned up half a dozen more.

Hesperoyucca whipplei, commonly called chaparral yucca or Lord’s Candle, is a native plant that has evolved to survive wildfires. It has a tough, fibrous, pineapple-shaped husk that insulates against heat and helps the plant conserve moisture and nutrients. Yuccas continue to produce their strap-like leaves, undeterred by fire, and are usually one of the first plants to regreen.

“They have a very high survival rate,” Mendelsohn explained.

The other plant with a survival superpower is less welcome. It’s the highly invasive, almost impossible to eradicate, Arundo donax, also known as giant cane.

The clump of arundo that Mendelsohn found had grown an impressive 12 inches since the fire, sending out dozens of elegant green bamboo-like sprouts that will turn into an impenetrable, inedible thicket that smothers native plants and chokes stream beds.

“It’s adapted to grow super quickly after fire,” Mendelsohn said. He explained that an important part of the restoration work in the Santa Monica Mountains National Recreation Area will involve working to keep invasive invaders like the arundo in check so native plants have a chance to recover.

Native plants were already in evidence. It was too soon to look for regrowth on the oaks and willows, and even  shrubs like laurel sumac that have massive root systems giving them the ability to quickly regrow had not yet begun to regenerate, but Mendelsohn identified the bright green shoots of the soap plant—a member of the lily family, which grows from a tough  bulb-like root.

Lance-leaved Live Forever, a succulent that is a member of the dudleya family, was also beginning to regrow, along with slender green shoots of a native needlegrass, and fat sprouts of giant rye, a plant that resembles arundo, but is a native grass and an important habitat plant.

“I’m excited to see what comes up,” Mendelsohn said. He anticipates a host of “fire followers,” herbaceous plants—many with beautiful flowers—that only grow after a fire.

While the plant life in the Santa Monica Mountains has evolved in a fire ecology, and some species need heat to germinate their seeds, the increasingly frequent fires the area is experiencing are too much, and may eventually cause irreversible change.

Mendelsohn described it as “type conversion,” a process that destroys key plant communities and causes the type of habitat to change. Chaparral becomes coastal sage scrub, coastal habitat becomes non-native seasonal grassland. Native animals that depend on specific plant communities for survival become displaced or locally extinct, along with the vegetation that supports them.

“It can become permanent,” Mendelsohn warned.

A key part of preventing that change is ensuring that non-natives don’t take over.

The National Park Service will need volunteers to help remove species like arundo as the fire recovery process moves forward. Volunteers can sign up online at: https://form.jotform.com/83166857030155.