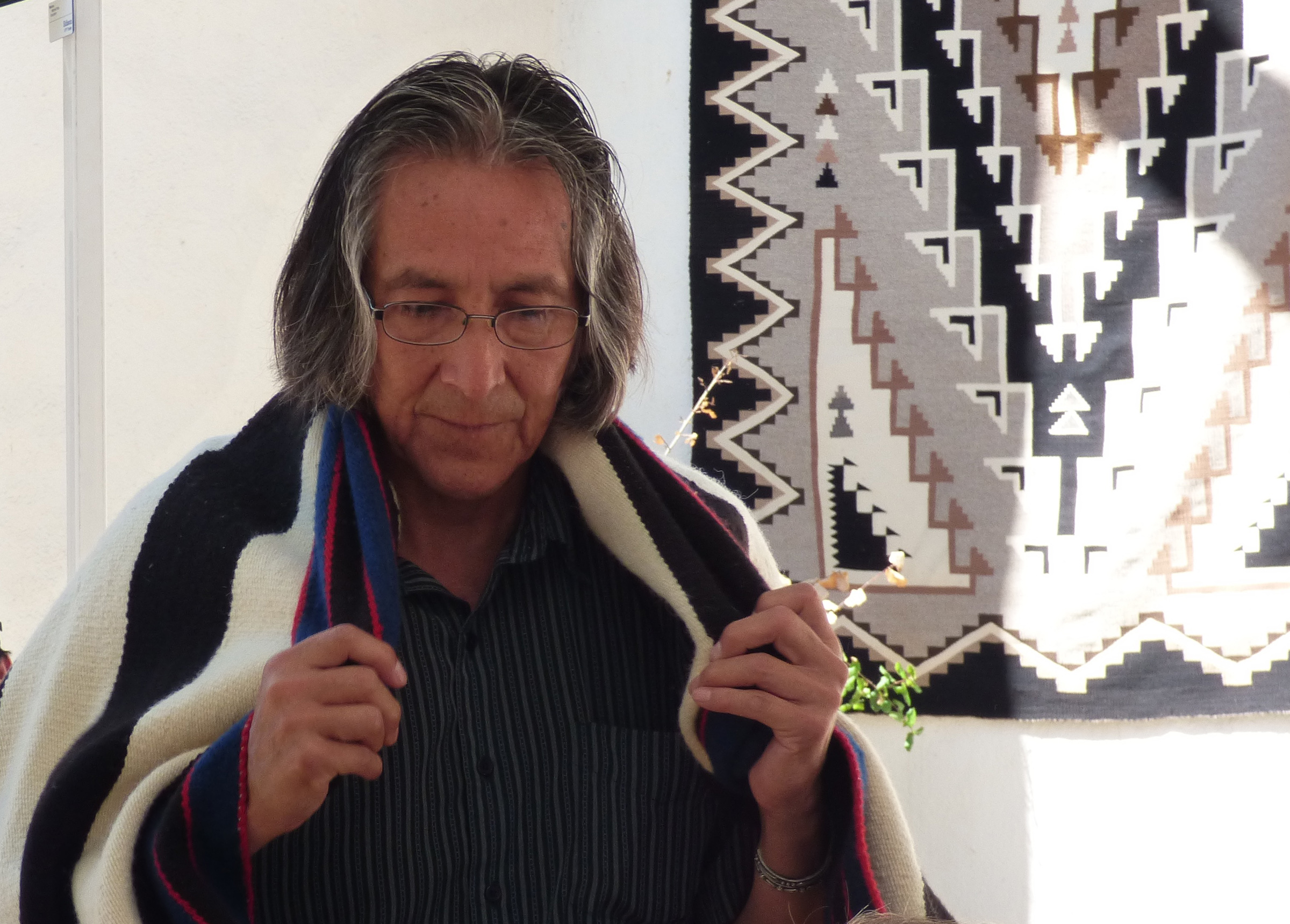 Navajo rug trader and authority Edison Eskeets demonstrating how a “chief’s blanket” would be worn for warmth. Shown is a “phase one” blanket, the earliest type of design featuring bold horizontal stripes dyed with natural materials. Photo by Suzanne Guldimann 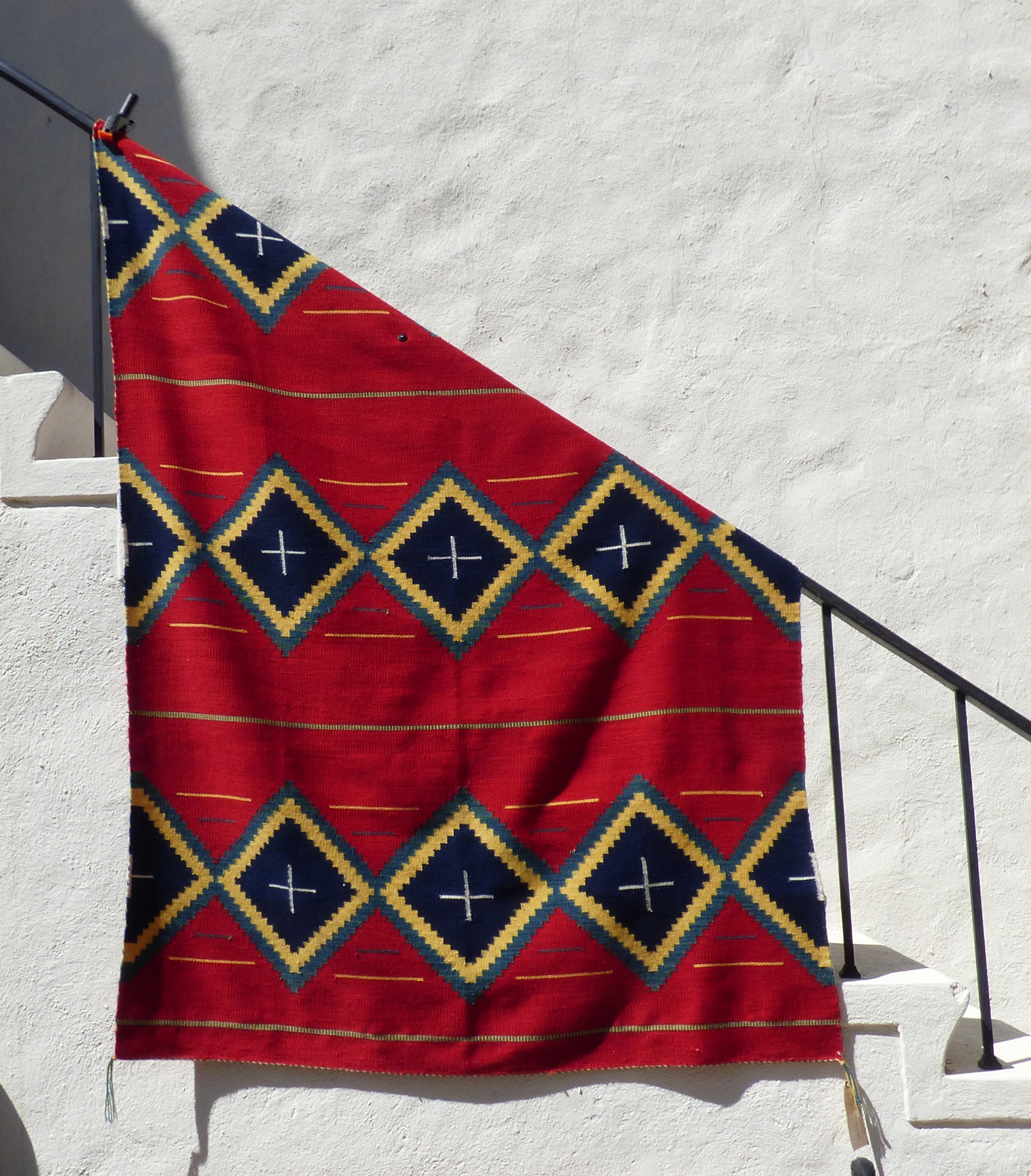 The crosses on this rug symbolize Spider Woman, one of the Holy People of the Navajo, who taught humans how how weave. 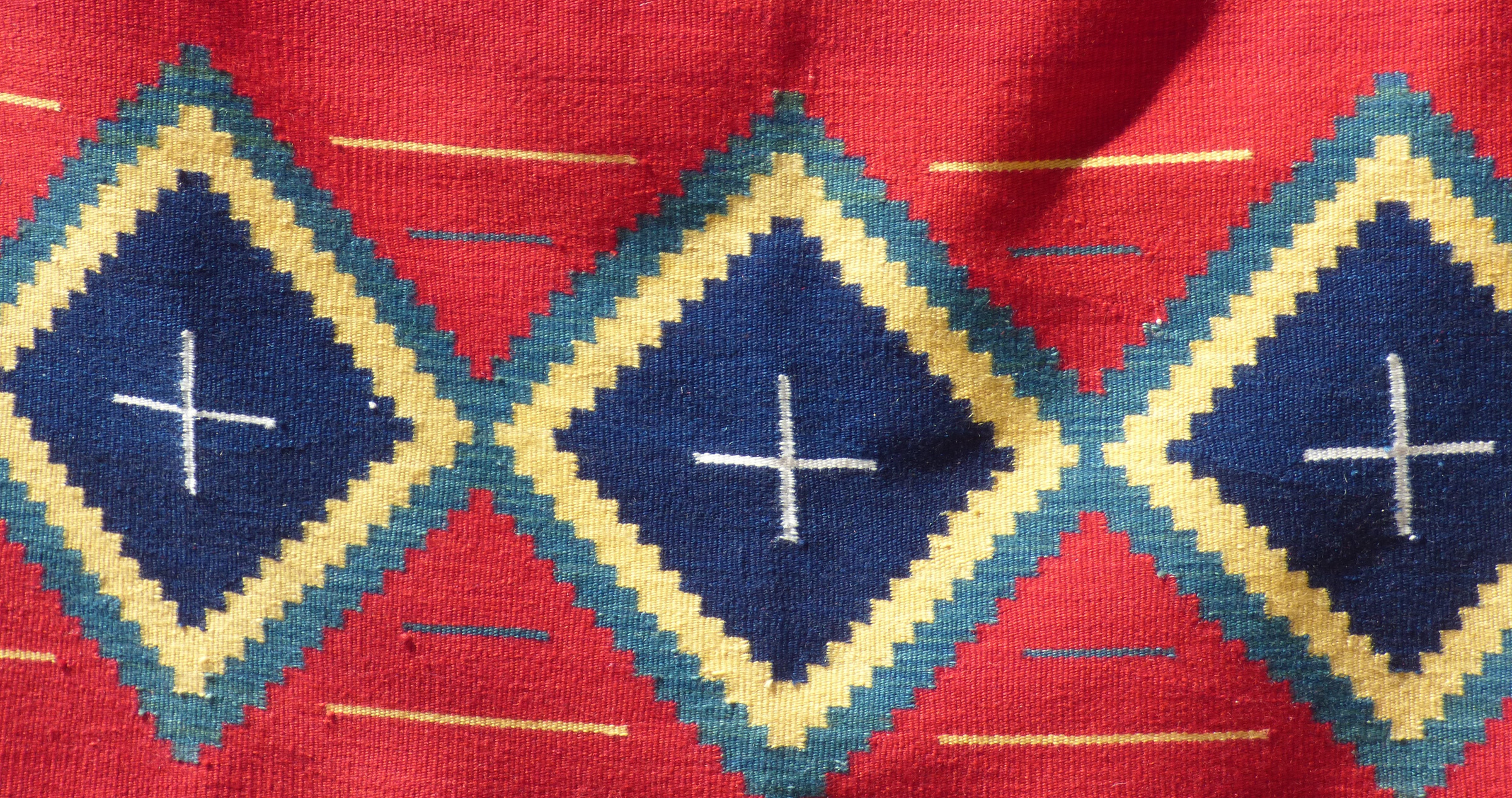 A closeup of the same rug, showing the details of the weaving and the pattern. 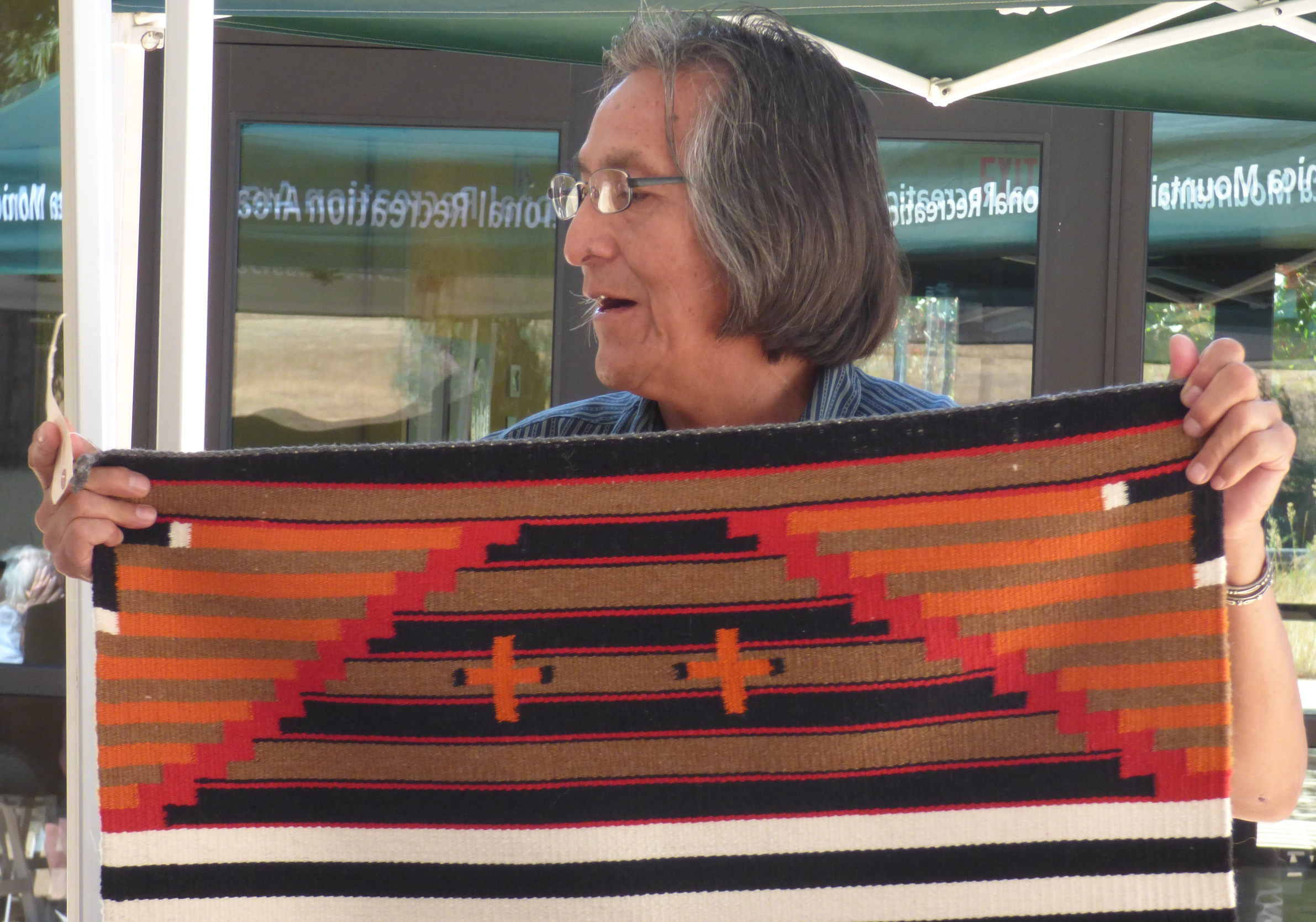 Eskeets holds up a more recent weaving, made with synthetic aniline dyes.

A pile of rugs featuring a variety of colors and designs. 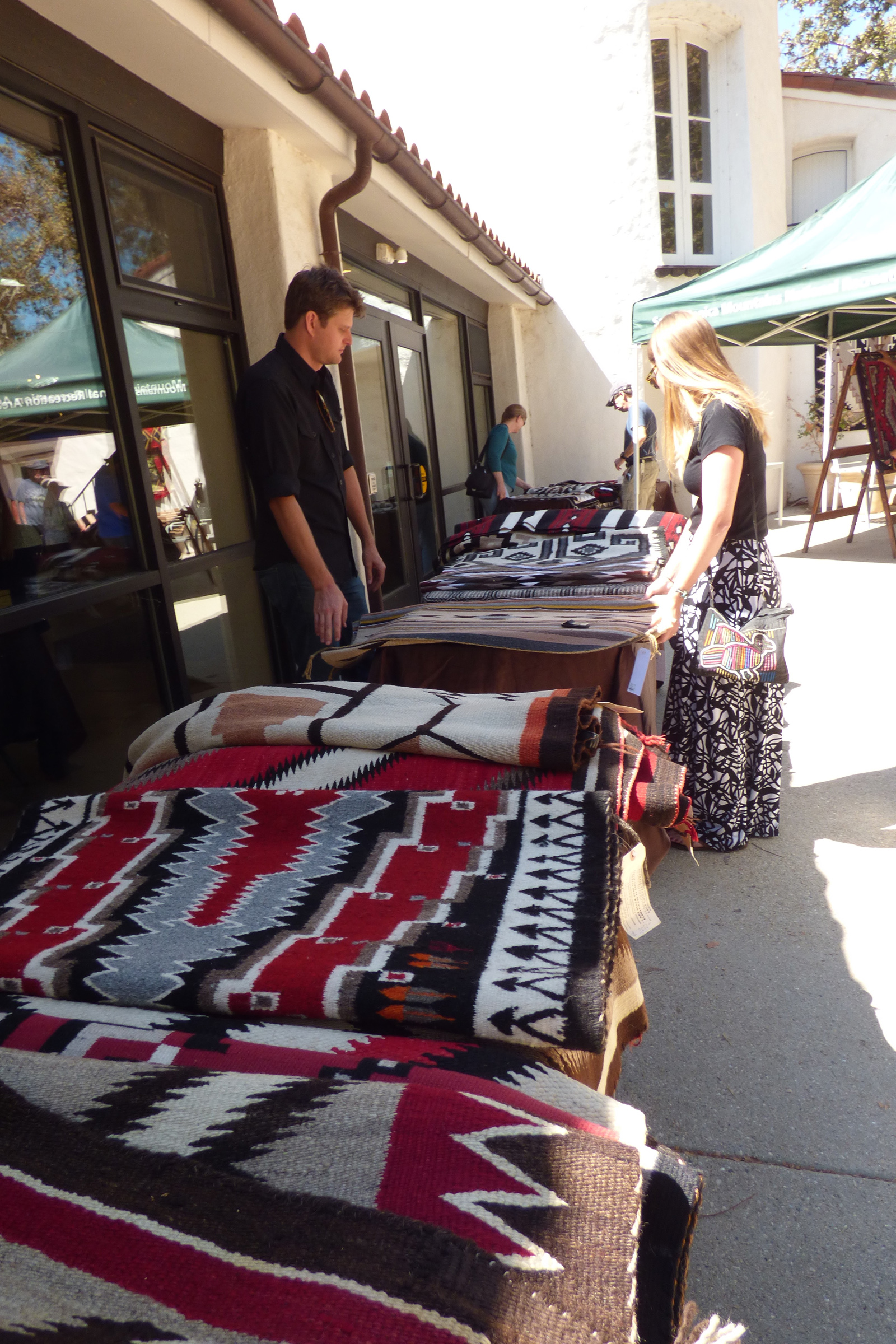 The rugs were laid out on long tables, and unlike at a museum, visitors were encouraged to take a close look and even touch the weavings. 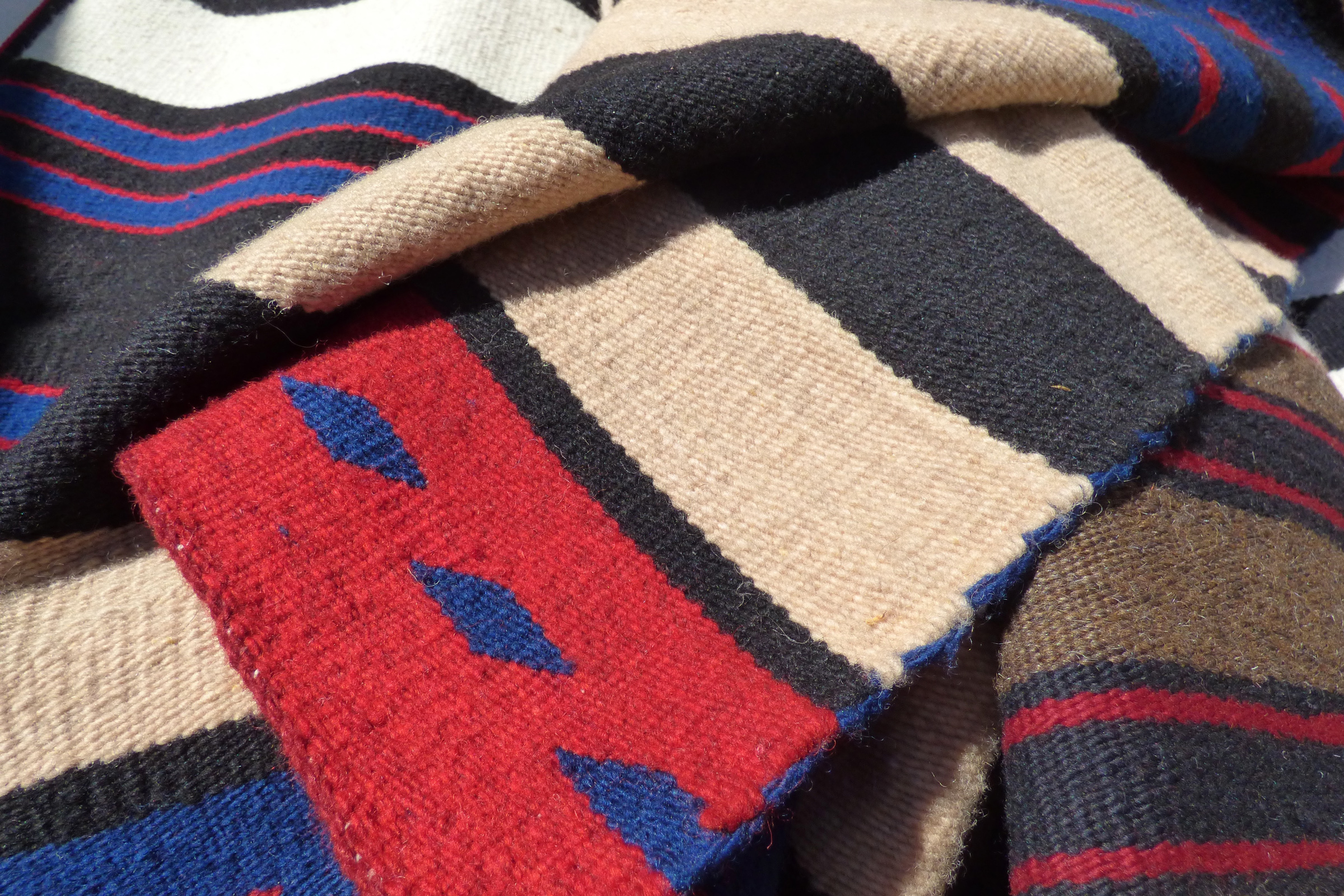 A pile of chief’s blankets, old and new, all of them vivid and bright.

The National Park Service (NPS) and (WNPA) celebrated the official arrival of autumn with the return of the Hubble Trading Post’s trunk show—a spectacular display of Navajo weaving that was both a fundraiser for the park and an open air, hands-on museum that offered a unique opportunity to learn about the rugs and their history.

Rugs by living weavers and vintage textiles covered tables in the courtyard of the Santa Monica Mountains National Recreation Area visitor center at King Gillette Ranch. Natural colors like indigo blue, soft crimson cochineal, and white, brown and black undyed wool contrasting with the vivid reds and yellows of the synthetic aniline dyes. The selection on display ranged from small, decorative rugs woven for the tourist trade, to everyday saddle blankets and chief’s blankets, made for hard use in everyday life.

Navajo rug expert Edison Eskeets is a trader at Hubbell Trading Post in Ganado, Arizona, which has traded goods and Native American art since 1878, and is now a National Historic Site, owned by the NPS and operated by the WNPA. He was at the event to share his extensive knowledge of the Navajo weaving tradition, including the history of the art form, the materials, techniques, and the meaning behind the designs used by weavers.

Eskeets explained the challenges in gathering and preparing natural dyes like cochineal, made from a beetle that feeds on certain cactus, and indigo blue, a dye made from a plant in the bean family that must be fermented and mixed with lime to create the distinctive blue-jean-colored dye. Synthetic dyes were adopted early, he explained, because they not only offered the weavers a wider range of colors but because because they saved time—an essential element when a completed rug could mean the difference between having money for food and going hungry.

Eskeets also described how the wool used to make the weavings has changed over time. Early rugs were made from the wool of  Navajo Churro sheep. This breed was forced to the edge of extinction by the U.S. government. “Kit Carson killed thousands of them,” Eskeets said, referring to the military force sent to subdue the Navajo people and round them up for the 330-mile “The Long Walk” to New Mexico, where they were interned for four years before being allowed to return to their homes.

The government continued to cull Navajo-Churro sheep throughout the 1890s and again in the 1930s, nearly eradicating the breed.

“They are still working to bring the breed back,” Eskeets said.

Eskeets showed how the rug designs have changed over time as well, from stripes to geometric patterns and pictorial weavings with designs depicting the Tree of Life filled with birds or the Yei, the Holy People of the Navajo.

Eskeets explained that many of the abstract patterns are more than simply decorative. Reocurring elements include storm and lightning motifs, the four sacred mountains of the Navajo homeland, and the four worlds that the Navajo people passed through on their way to this world. Eskeets pointed out a cross-shaped symbol that appeared on several of the weavings and explained that it represented one of the holy People: Spider Woman, the helper and protector of humans, who taught the Navajo the art of weaving.

Asked about his favorite type of rug, Eskeets surprised his audience by answering “cotton.” He explained that in the years following World War II, weavers in the Gallup, New Mexico area, where he grew up, used U.S. military surplus cotton cord and string to make small, colorful rugs.

These decorative and durable “Gallup throw rugs” were originally sold at places like gas stations and remain popular for their vivid designs and still-affordable price.

All of the rugs on display at the event, even the oldest, retain their distinctive colors. Eskeets told his audience that the weavings are durable and long-lasting, provided they receive some basic care. He is an advocate for not being afraid to use the weavings for their intended purpose.

Eskeets stated that the worst thing one can do with a rug is fold it up and store it. As long as the textile is hung on a wall or spread on a bed or the floor, and kept out of direct sunlight, it should last for decades, he said. “All you need to do is turn them four times a year,” Eskeets explained, although he recommended keeping careful watch for moth damage and making sure rugs are out of reach of household pets. He added that dogs are often attracted to wool textiles. “They can still smell the sheep,” he said.

A pamphlet provided at the event added some additional suggestions, including regularly inspecting and vacuuming Navajo rugs, but never washing, steam cleaning, or shaking a rug to get it clean. “Dry cleaning can be used in an emergency,” it states.

Rugs that need to be stored should be rolled top to bottom. Wool rugs should be checked regularly for the presence of moths. Freezing the rug for 24 hours will kill moths and moth eggs, but it’s better to stay vigilant and not allow a tiny insect to destroy a one-of-a-kind work of art.

Depending on the complexity of the design, each rug may take weeks or even months to complete. No two textiles are alike, even if the artist repeats the same motif. Traditionally, the weavers have also raised and cared for their own sheep, shearing the wool, spinning, carding, and dying it, before beginning to weave. Some weavers still prepare the traditional plant-based dyes. The actual weaving of the textile is only part of a process that is steeped in tradition but also reflects the individual vision of the weaver.

To learn more about the Hubbell Trading Post, visit http://www.hubbelltradingpost.org. To stay up to date on upcoming WNPA and NPS events in the Santa Monica Mountains National Recreation Area, go to http://samofund.org/calendar