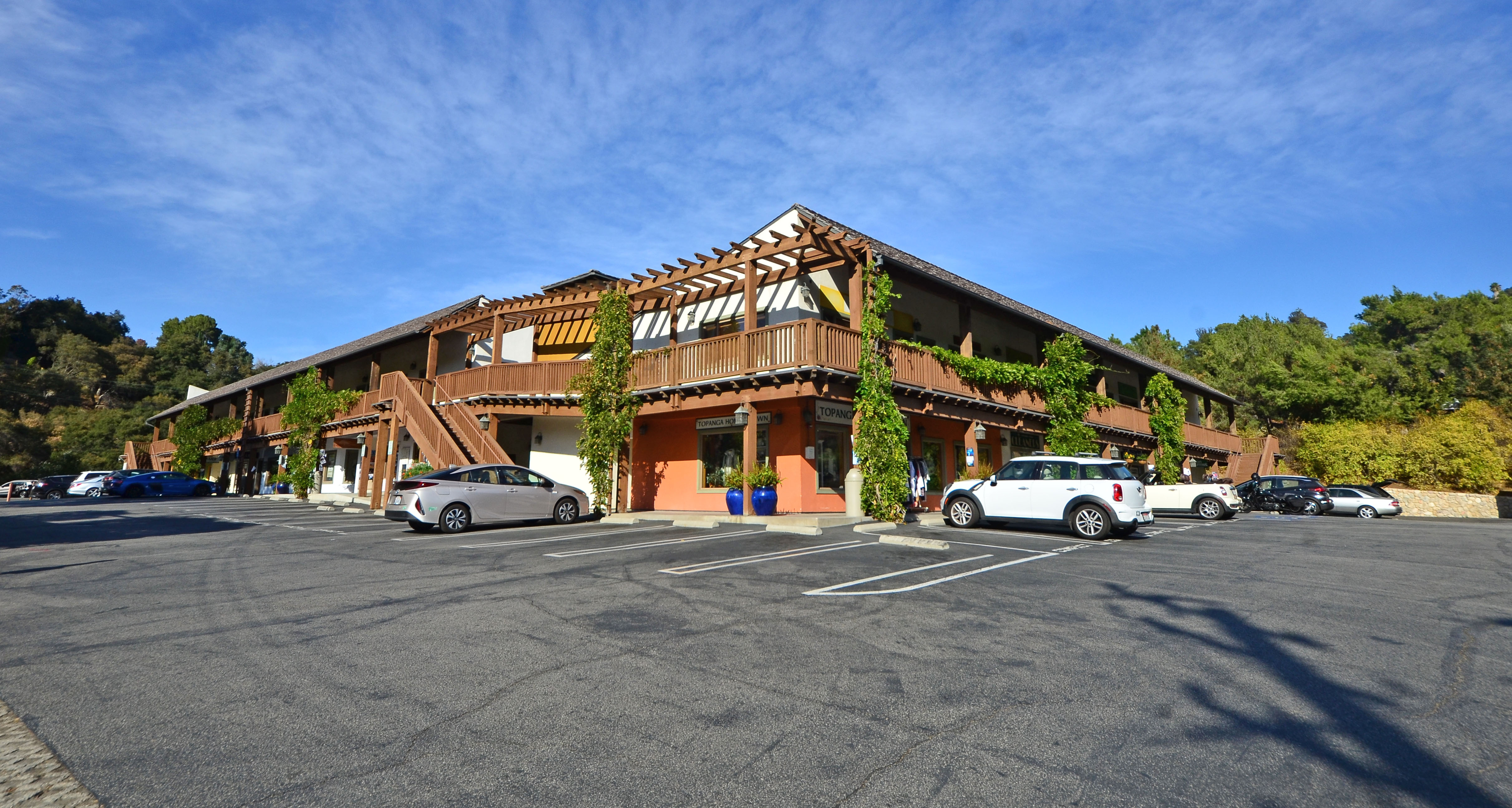 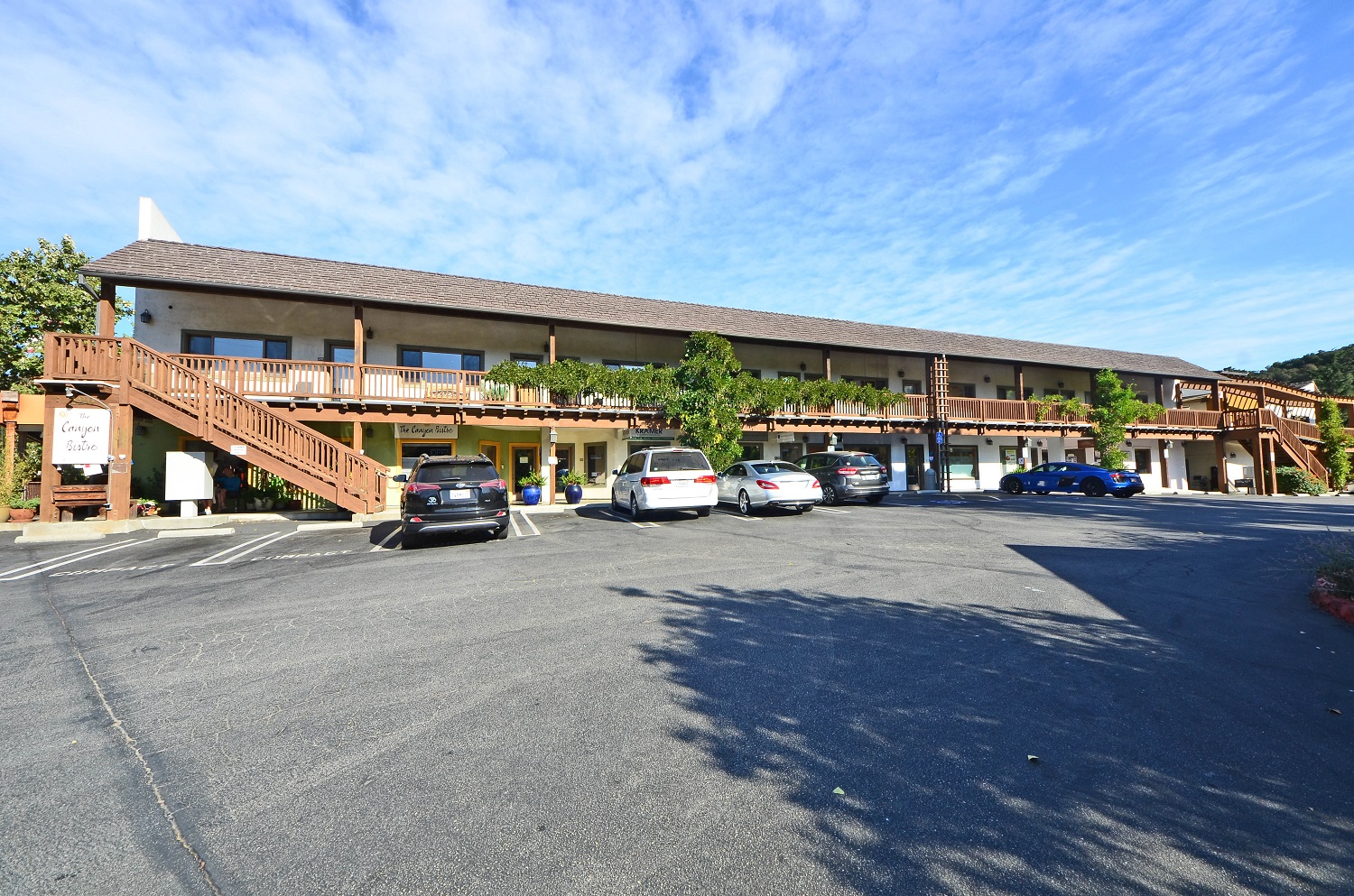 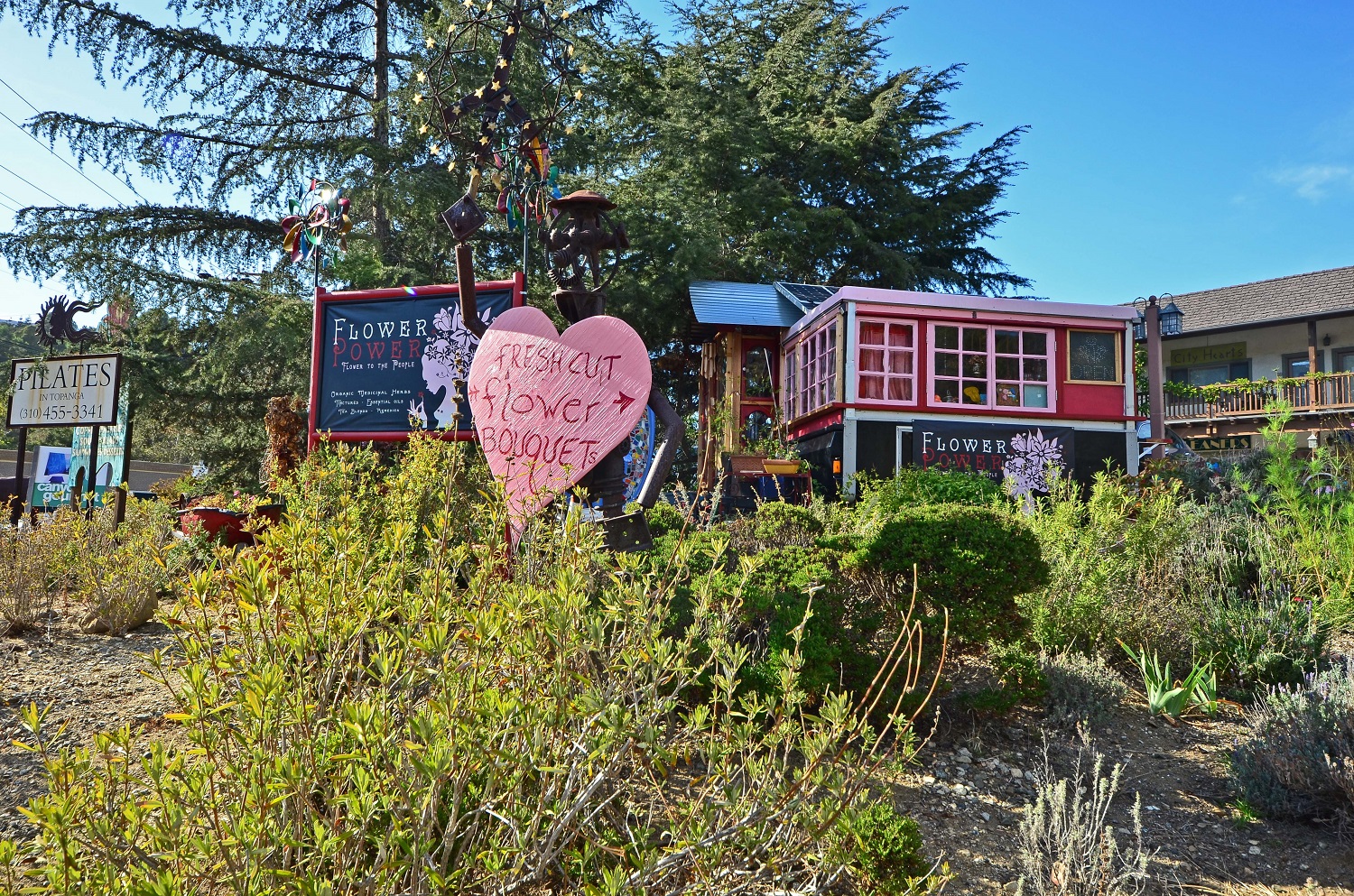 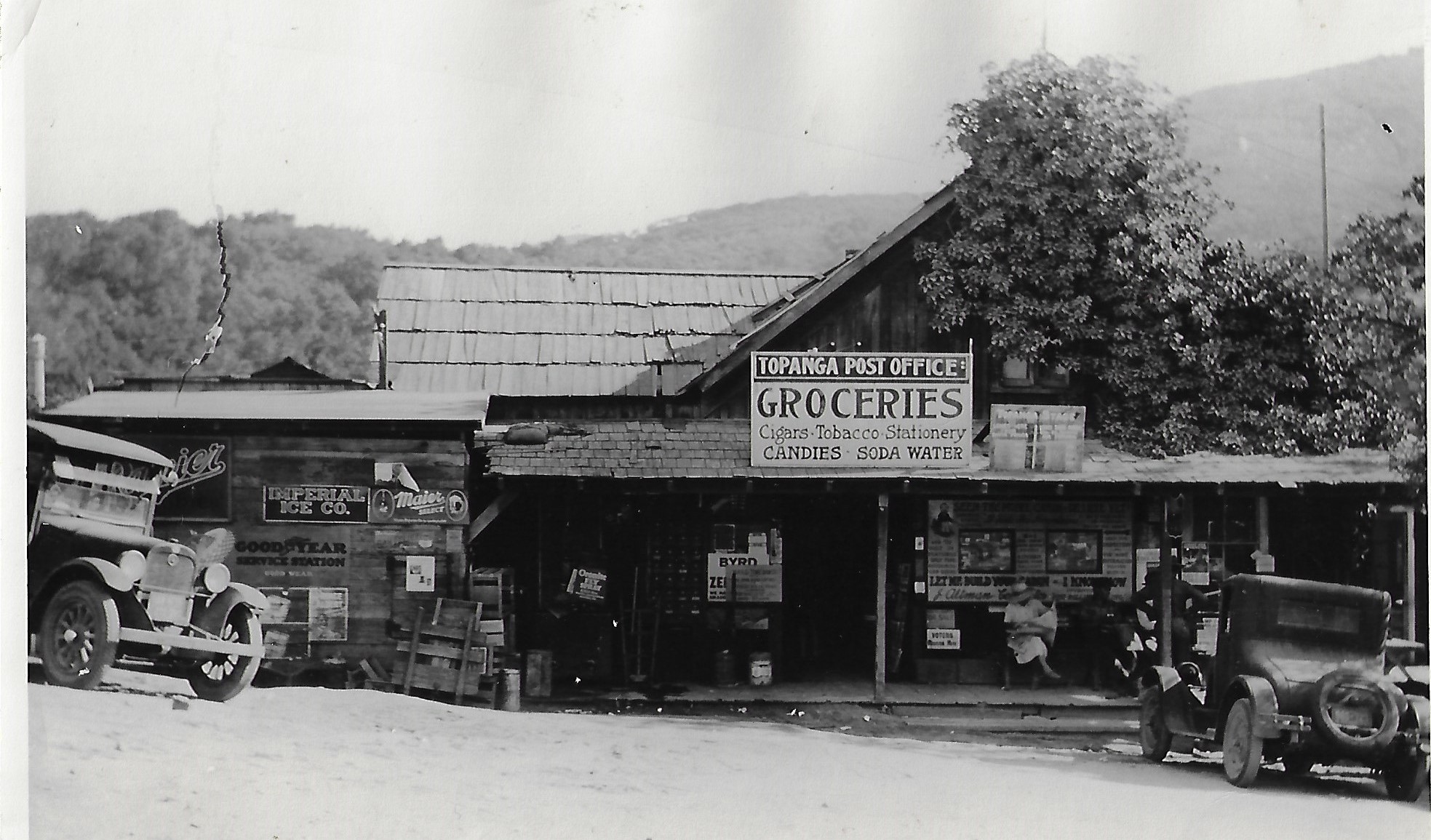 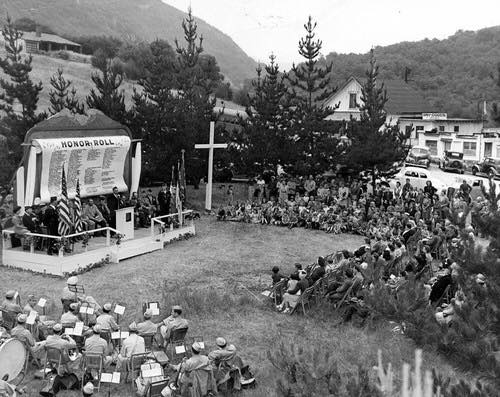 This Honor Roll of World War II men and women serving in the armed forces was unveiled by the American Legion on Memorial Day, 1944, at what is now Pine Tree Circle. Photo courtesy of Topanga Historical Society 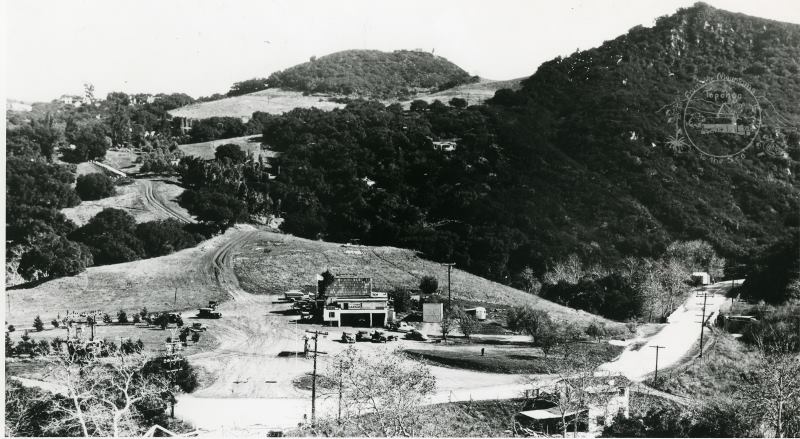 Aerial view of Topanga Crossroads in the mid 1920s showing the General Store and the Post Office. Photo courtesy of Topanga Historical Society

WHILE STEVE AND LESLIE CARLSON WEREN’T INTENDING TO SELL, THEY MET A FAMILY THAT WILL CARRY PINE TREE CIRCLE INTO THE FUTURE IN THE TOPANGA TRADITION THAT EMBRACES THE COMMUNITY.

Topanga welcomes the new owners of Pine Tree Circle, Joseph Daneshgar and his son, Nathan (Nate), who took possession of the property on September 27.

“I’m thankful for the opportunity before me,” Nathan says, “and to have a new reason to spend more time in such a beautiful and special place. We love Topanga for its fascinating history, natural beauty, artistry, and especially the confluence of individualism and community, two rare principles on their own, and all the more powerful together.”

The new owners also wanted the community to know how much they appreciate Leslie and Steve Carlson and the good they have done for the community.

“We look forward to following in their footsteps.”

“I’m especially happy to have a reason to spend more time in such a beautiful place.,” Nathan said.

While the Carlson’s weren’t looking to sell Pine Tree Circle, when the opportunity came, they took it.

“We were always very hands-on at Pine Tree Circle, but now we feel it’s time to start slowing down and enjoy spending more time at the ranch,” Leslie said. “The Daneshgars are a close family with three children. Steve, Kristen and I all felt they will do the right thing. I hope the tenants will stay and that the community will give them a chance.

“Our 19th Snow Day is coming up for the holidays and we’ll be here to help.”

Leslie also wants people to know that, contrary to rumor, “we are not moving. Topanga is always going to be home.”

Topanga Historical Society Picnic: Historic Business Signs will be on display plus a “Meet and Greet” with Pine Tree Circle’s New Owners.

Topanga’s Pine Tree Circle shopping center is the site and subject for the Topanga Historical Society’s annual picnic to be held on Sunday, October 28, at 12 noon.

The program will include the opportunity to view the Society’s recently installed collection of vintage Topanga business signs that grace the walls of its second-floor office, learn about Pine Tree Circle’s history, and meet Pine Tree Circle’s new owners.

Pine Tree Circle’s location, the wide level open space near the confluence of Topanga’s two creeks, made it an excellent site for Topanga’s Native American community because it is close to water, but high enough to escape flooding. In the 1880s, the area was chosen as the site of Topanga’s first general store, which became the community’s gathering place. In 1908, it housed a post office and, in later years, contained a small Los Angeles County Public Library station. At different times over the years the building had an ice house and a gas pump, and in the 1920s, was a popular setting for Western movies, some staring Tom Mix.

After it was torn down in 1952, the area, which had been planted with a ring of pine trees, became the site of community gatherings such as Easter egg hunts and the early Strawberry Festivals.

Leslie and Steve Carlson bought the two-acre property in 1987. In 2000 the Carlsons built the 25,000-square-foot building and named it Pine Tree Circle in recognition of Topanga’s history.

After eighteen years of operating the property and watching it become the community’s busy business and social hub and, after years of warmly and generously supporting their community, the Carlson’s decided to sell and spend more time at their ranch in the San Luis Obispo area. The sale was recently closed and the new owners,  Joseph Daneshgar and his son Nathan will be attending our event. We are thrilled that they will meet and greet us, learn about Topanga’s history, and enjoy our down-home hospitality.

The Topanga Historical Society was one of Pine Tree Circle’s first tenants. Before construction was finished and the stairways put in, the Carlson’s invited the Society’s president, Gerry Haigh, to select whichever unit he liked for its archive center. Gerry, along with Ami Kirby, who was the Society’s archivist at that time, climbed a ladder to the second floor and chose Unit 206 because they felt it afforded the best mountain view.

The Society’s office, which houses a rich collection of photos and documents relating to Topanga’s history, has on its walls a recently installed collection of vintage Topanga business signs that once hung on the walls of Pat’s Topanga Grill. When the restaurant closed, owners Pat and Kathi Burke graciously gave the signs to the Society. Society members Gail McTune and Scott King removed the signs and carefully stored them until July of this year when they were mounted on the Society’s office walls, making a dramatic visual display of Topanga’s business history.

The office will be open during the picnic and everyone is invited to come on up and check them out!  Kathi Burke will be present to answer questions and give background information about the signs.

Those attending the event should bring a folding lawn or beach chair for comfortable seating. Bring your best dish for the Society’s now famous potluck feast. Paper plates, cutlery, coffee, tea, and lemon water will be provided. Everyone is invited. Pine Tree Circle is located at 1205 Topanga Canyon Blvd.