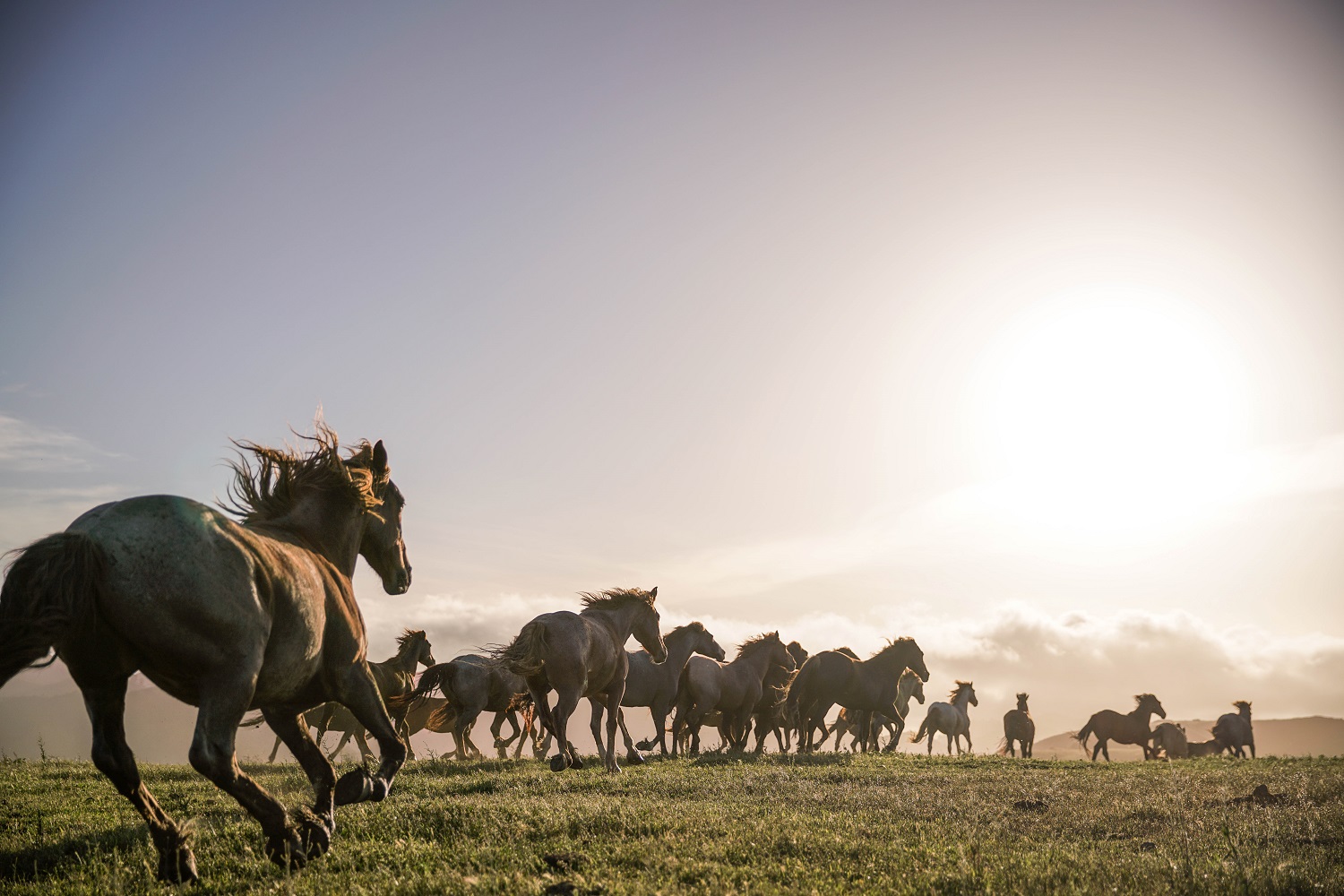 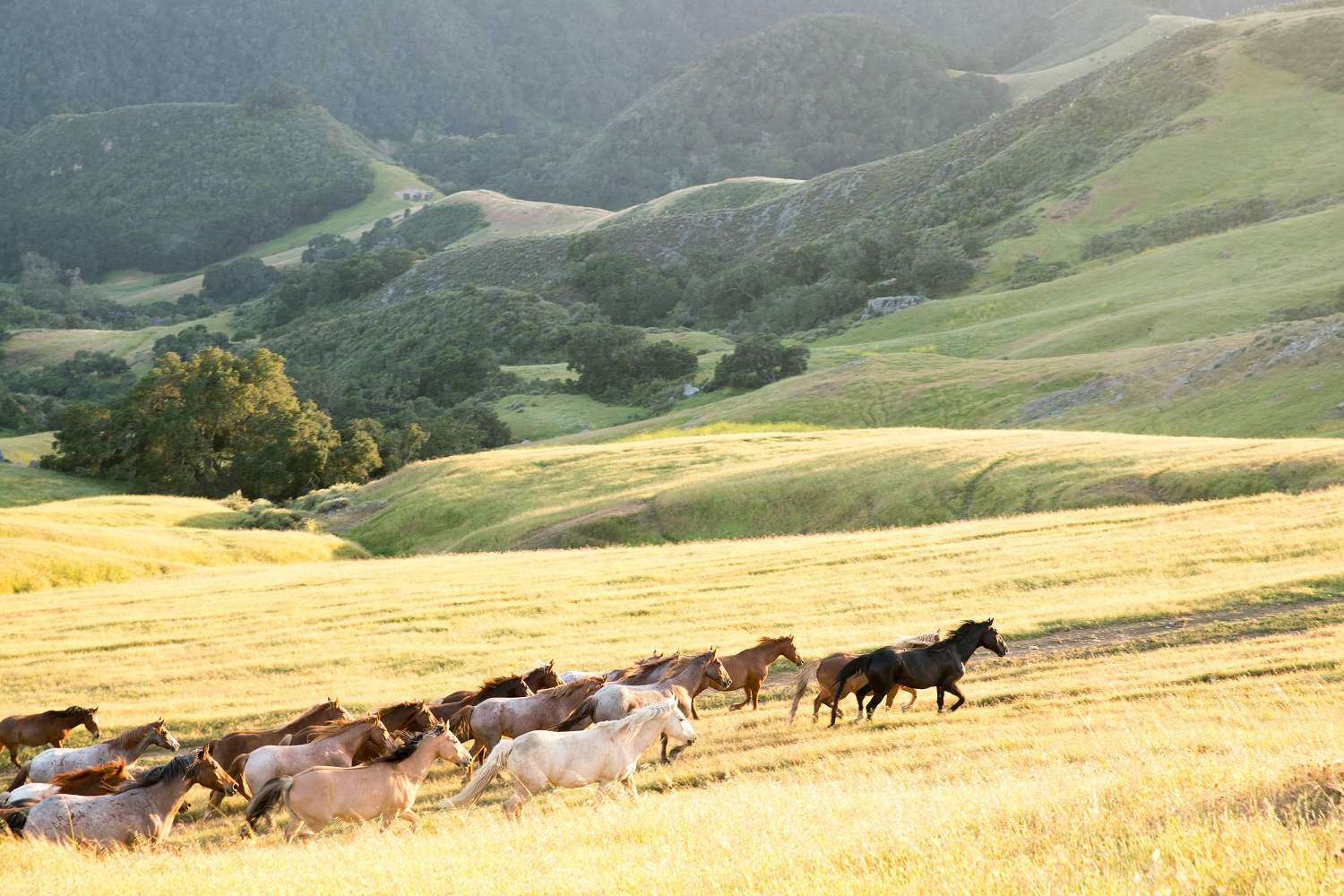 These horses have 1,000 acres of grassland to graze and run free. None have ever been haltered or ridden. Photo by Lilian Haidar 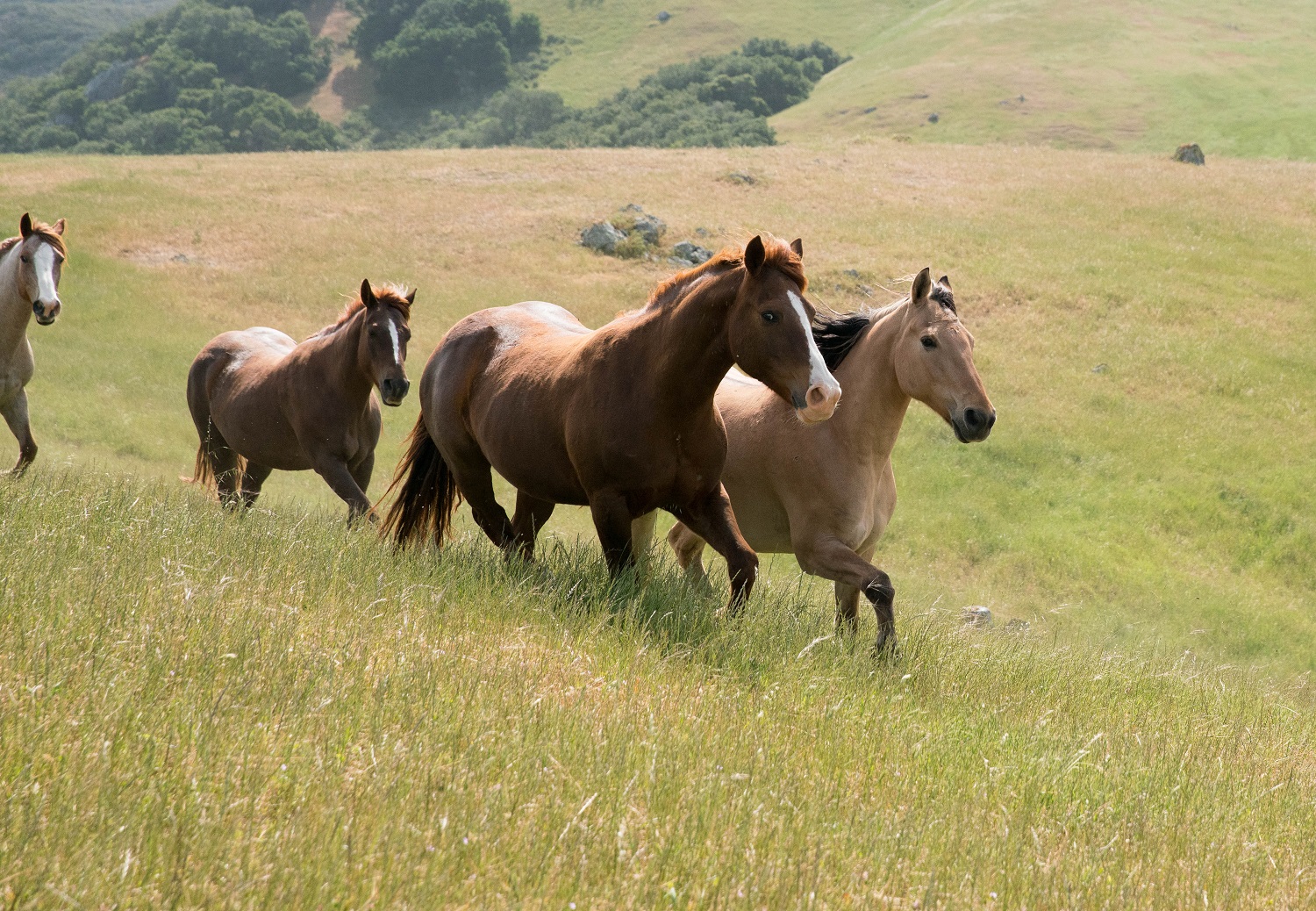 When Galahad and Hope, separated for six years, were recently reunited , Hope put her nose to his and they haven’t left each other’s side since. Photo by Lilian Haidar 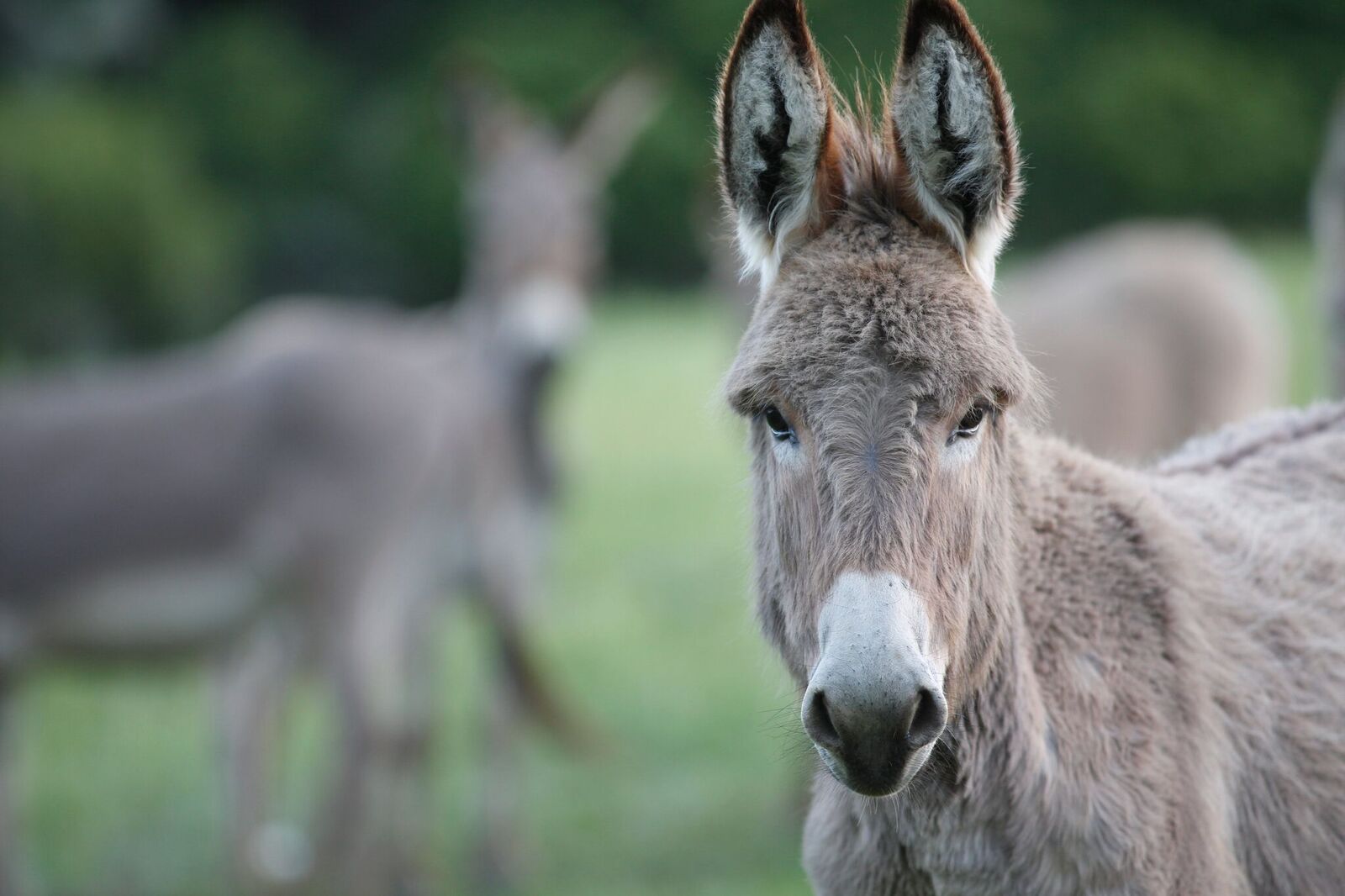 One of 16 burros at the SLO Ranch ready for his close-up. Photo by Lilian Haidar 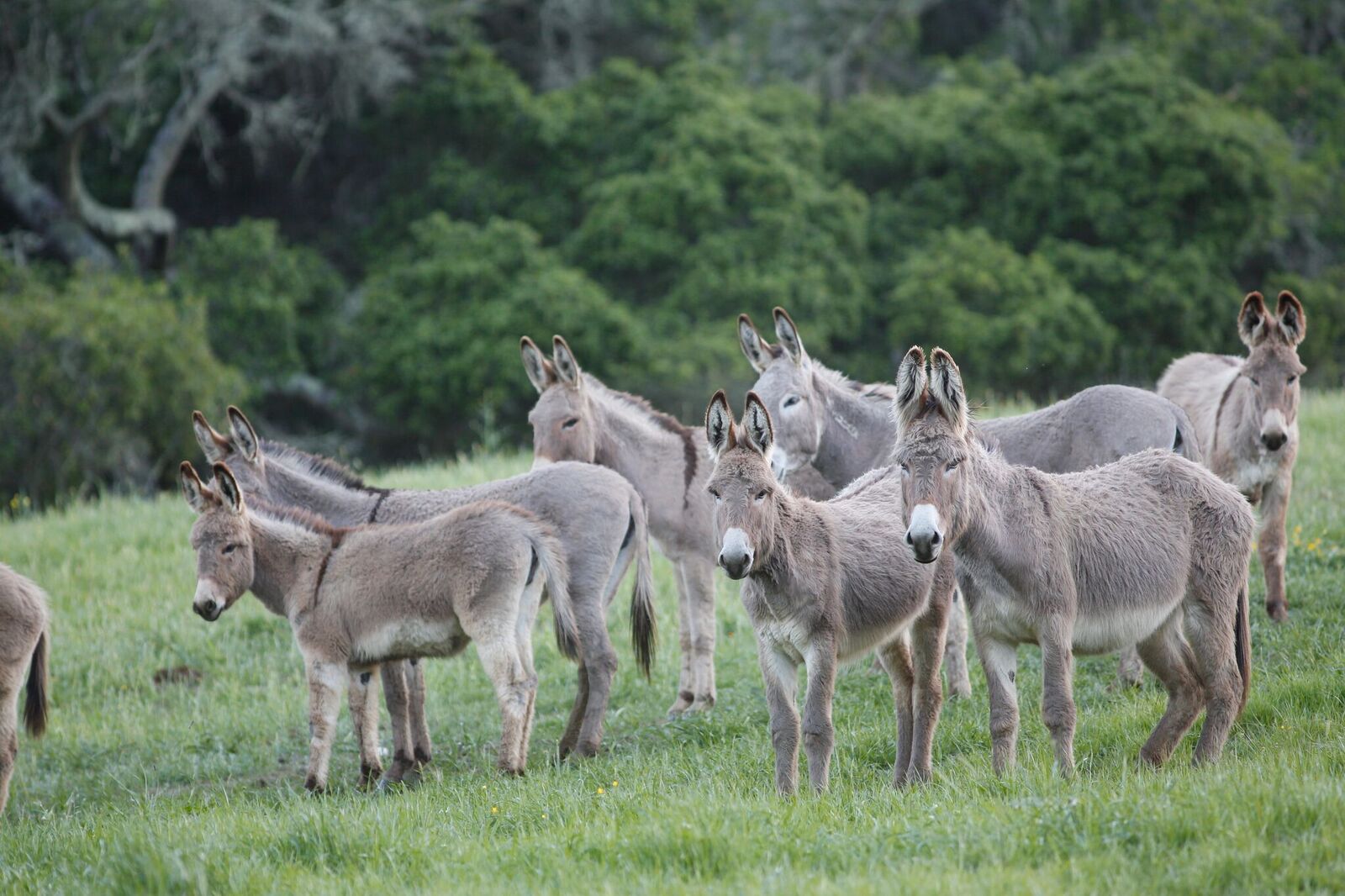 Part of the burro herd rescued from the Bureau of Land Management roundup. Photo by Lilian Haidar 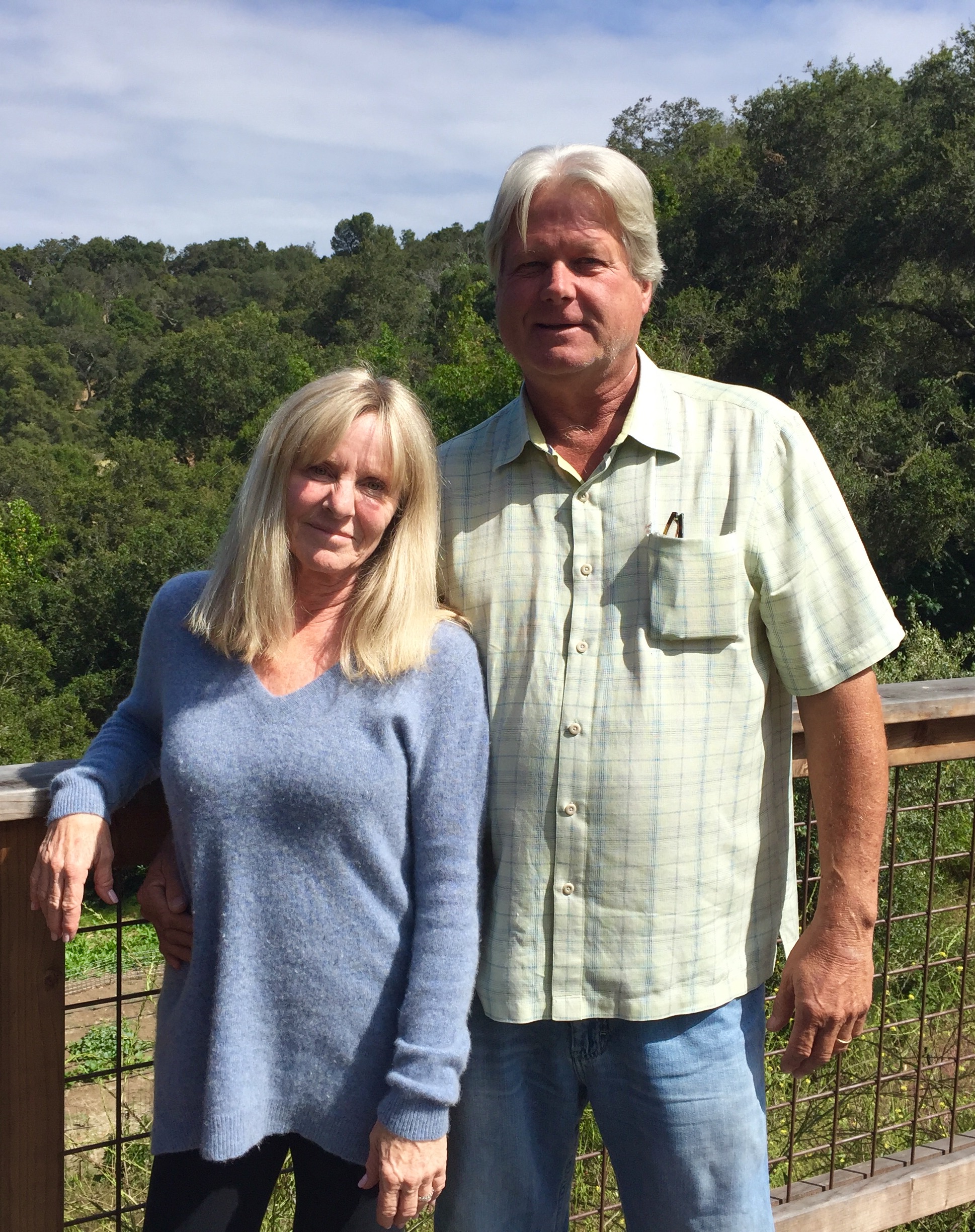 Topanga philanthropists Leslie and Steve Carlson speak about their work and lives committed to giving and sharing, especially with Return to Freedom, a nonprofit dedicated to the welfare of wild horses through sanctuary and advocacy.

“We both love animals,” said Steve Carlson, “but Leslie really loves animals. The bottom line with philanthropy is you are looking to improve the world. If you have the ability to do it, whether it’s money or time, you have to help.”

Horses are gentle, smart animals, says Leslie Carlson. “I just love them.” Horses have been a passion of hers since she was six. “My dad always rode,” she said. “So did I, until ten years ago, when my knees got bad. I keep putting off getting new knees. I’m hoping they’ll come up with something less invasive.”

For many years, the Carlsons have supported Neda DeMayo, founder and president of Return to Freedom, a nonprofit based 50 miles north of Santa Barbara that finds sanctuary for wild horses and burros and is a leading voice in wild horse advocacy.

“Neda is brilliant. We believe in her and what she’s doing, and we’re happy to help out,” said Steve. “There’s no bureaucracy. All the money raised goes to the horses.”

The Carlsons spend most of their time at their Topanga home, where they raised their daughter, Kristen. They also have a ranch in San Luis Obispo, where many wild horses from Return to Freedom are now roaming safe and free. “We like our property to have life on it. We have deer, mountain lions, wild turkeys and boar up there,” said Steve who says the plight of wild horses is of great concern. “None of these horses have ever been haltered or ridden.”

The Bureau of Land Management, the federal agency that manages wild horses, controls the impacts of grazing and natural water use in open spaces. Ranch cattle are often kept in the same areas as wild horses, which has led to thousands of horses being displaced from their habitat and forced into government holding corrals and pastures where they are separated by gender, and family groups are broken up.

Although the Carlsons used to lease their property for cows, when the grass ran out the cattle became prohibitively expensive for the owners to feed and keep. “I told Neda, as soon as the cows are gone from the ranch, we’ll have the horses,” said Leslie.

Together 42 years, married for 37, Leslie and Steve communicate easily and comfortably, and share, without interrupting the other, the story of the day the horses were set free on their San Luis Obispo ranch.

Steve began, “When we released the initial 39 in May 2015, we had 60 people at the ranch to see it. There wasn’t a dry eye among the women, and half the men. It looked like it had been choreographed; it was so beautiful.”

Leslie picks up the thread. “Since then, we’ve added 16 burros and 25 more horses from other herds. They live happily on the 1,000 acres of rolling grassland. That’s all they eat. We have great grasses that pretty much last all year round because they are not overstocked. Last fall, before the rains, their feed was supplemented for almost two months.”

Return to Freedom provides refuge for 500 wild horses and 44 burros. Having some of the horses sustained on the Carlson ranch has saved the organization $20,000 a month in feed costs. The natural topography and rock maintain their hooves and the horses thrive there.

There are numerous troughs filled from wells dotting the ranch, plus a few small reservoirs that the horses submerge themselves in during the summer. “It cools them,” said Leslie. “They deliberately dredge up the mud from the bottom to coat themselves to keep the flies away. It’s fun to watch a group all enjoying themselves at once. Our land will [continue to] be a sanctuary for wild horses.”

One pair of horses, Galahad and Hope, had been separated for six years and were recently reunited at the Return to Freedom ranch. “When Hope saw Galahad,” said Neda DeMayo, “she put her nose to his and spent an hour going up one side of his face and down the other. They haven’t left each other’s side since.”

DeMayo is grateful for the Carlson’s support. “The whole family are truly amazing ambassadors for the American mustang and the burros. Sharing the joy of this fulfilling experience is a bond we share and look forward to sharing with other individuals who have the resources to help,” said DeMayo.

The Carlson family had horses on their Topanga spread when daughter Kristen was growing up. Kristen totally supports her parents’ work with Return to Freedom. “Kristen still has her horse, Holiday, from the time she was 12,” said Leslie. “Holiday is 23 now.” Granddaughter Lily, 9, also loves horses.

“Steve and I have started buying lottery tickets,” said Leslie. “So if we win, we can buy another ranch and have more horses.”

“We laugh about it, but it’s a fun thing to do,” said Steve, who, ironically, is allergic to horses. But he understands his wife’s affinity for them. “I try to ignore the horses at the ranch, but they keep following me,” he said.

Leslie and Steve have lived in Topanga for 30 years and are deeply involved in the community and support local charities. Most of their giving is focused on education and the arts, with education being a priority.

A businessman and entrepreneur working in real estate and construction with his wife, daughter and brother, Steve and Leslie built, own and manage Pine Tree Circle, along with the land where Abuelitas restaurant is. Steve says he will never retire.

When they first moved to Topanga, the Carlsons had a dream to be self-sufficient. “We had 10 honey beehives, 200 laying hens, fruit trees, vegetables and 500 to 600 tomato plants.” said Steve. “We ran a pretty decent farm stand. This was in ’87. We were beyond organic. We used nothing outside of horse manure. No pesticides. We sold Christmas trees and local crafts.”

That farm stand was an old railroad car (locals called it “The Boxcar) on the Abuelitas site, but has now blossomed into Topanga Home Grown, the gift and clothing store in Pine Tree Circle, where Leslie is a partner. “That’s why there’s a tomato on the logo,” said Steve.

Despite the emotional pull of their San Luis Obispo setup, the couple will not be moving from Topanga. “If there was somewhere better to live,” said Steve, “we would have moved there.”

For more information about Return to Freedom—a nonprofit dedicated to preserving the freedom, diversity, and habitat of America’s wild horses and burros through sanctuary, education, advocacy and conservation—visit www.returntofreedom.org.