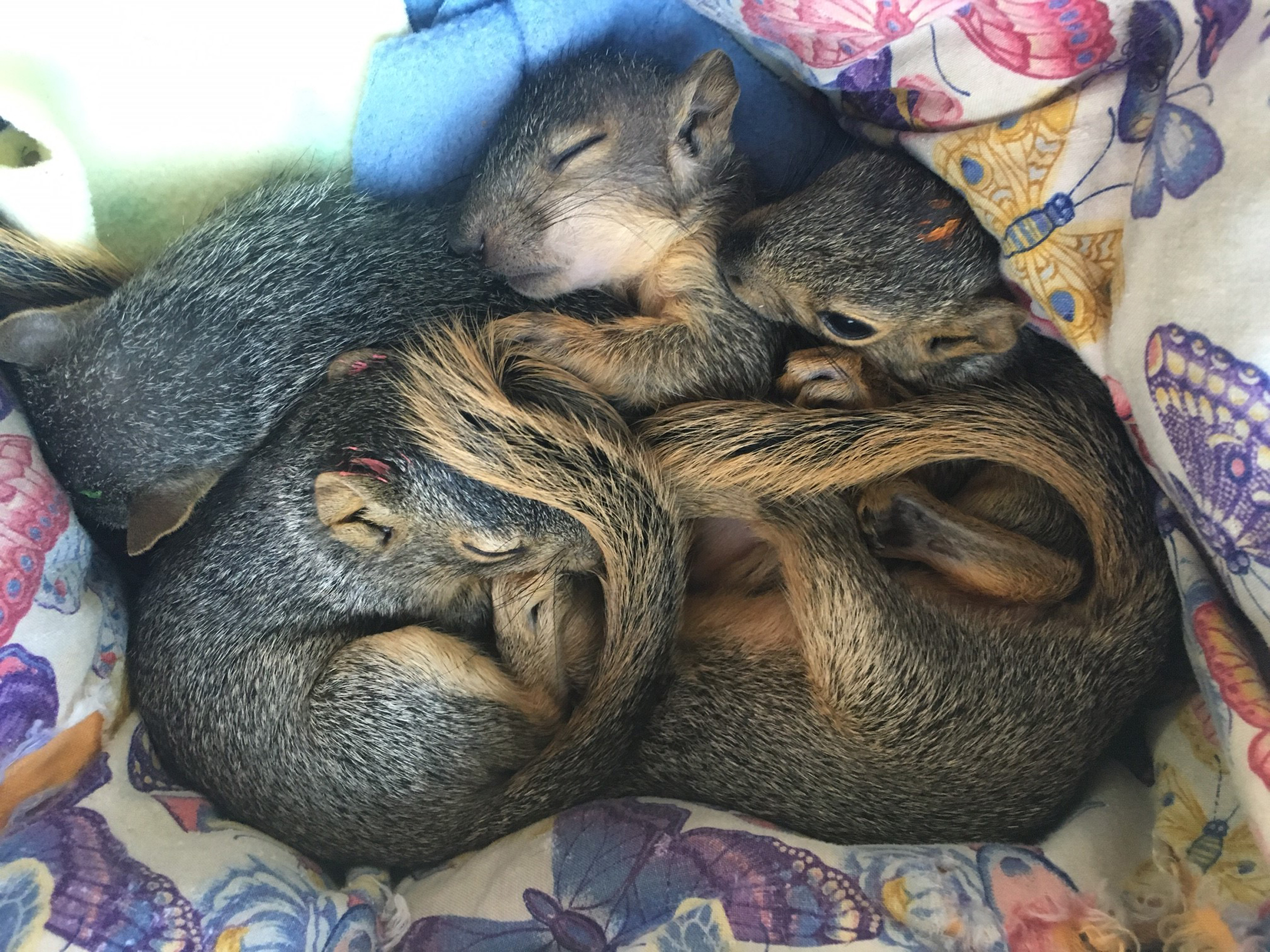 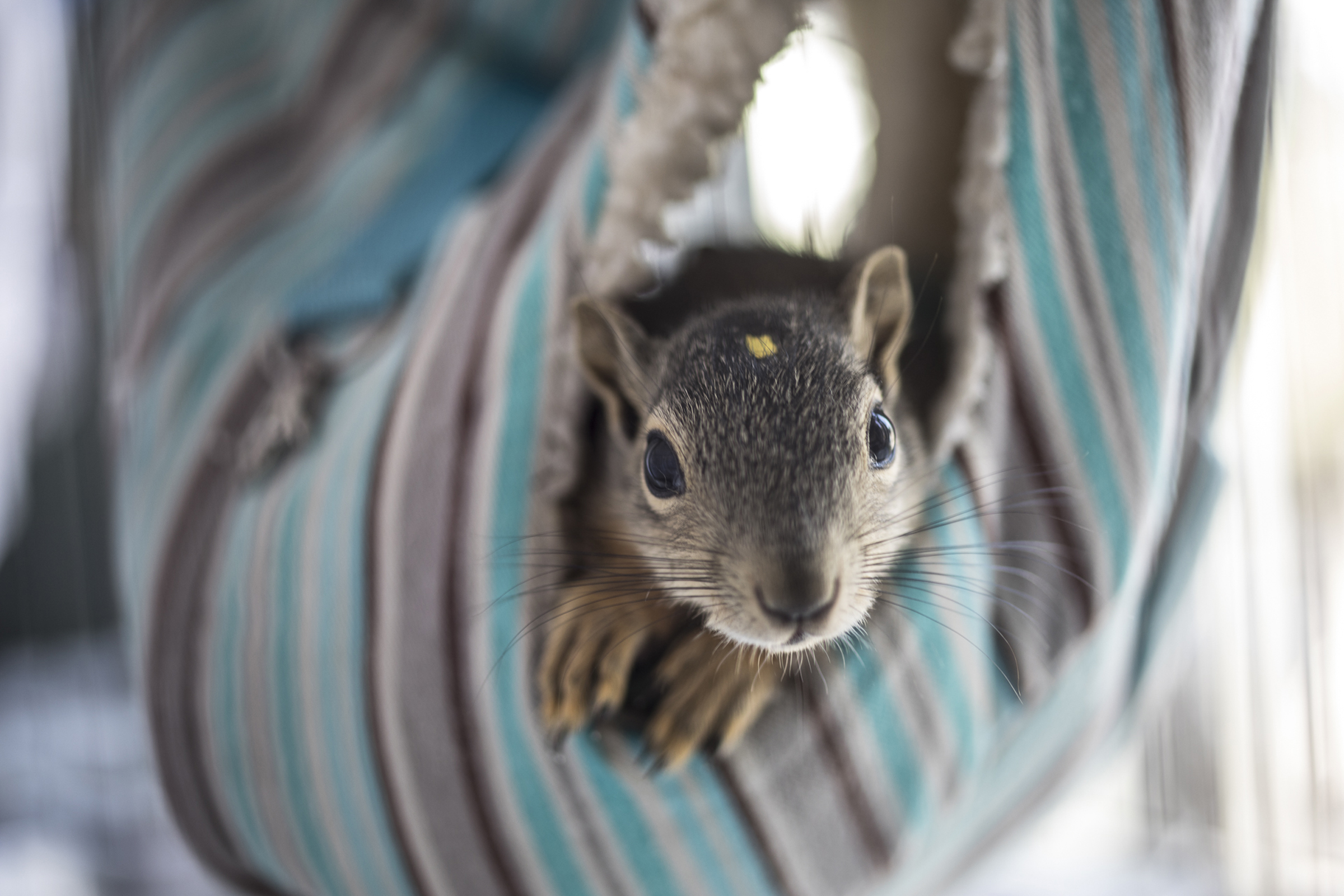 Photo by Anne Slattery (Peek-a-boo baby in a sling). 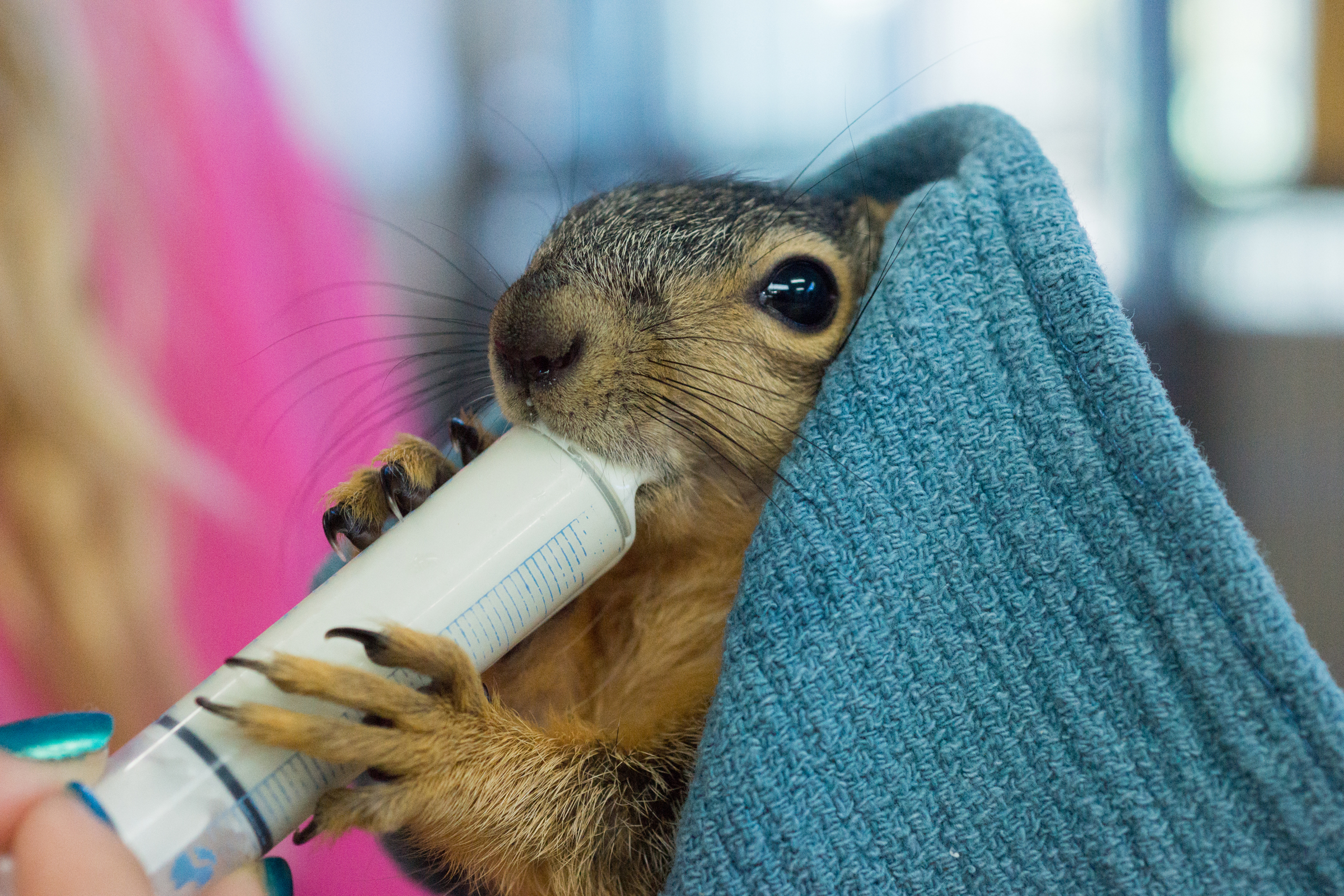 The  (CWC), a non-profit organization, rescues hundreds of squirrels each year and already has 83 orphan baby squirrels in its care.

While most birds in the Santa Monica Mountains are just beginning to build nests and lay eggs, two local species of tree squirrel are already busy raising their young.

Orphaned or injured squirrels have little chance of survival without human intervention, but there are humans who care enough to help. California Wildlife Center (CWC) Executive Director Jennifer Brent shared some of the challenges the center’s staff and volunteers face with the floodtide of spring babies.

Although these intelligent, curious, gregarious animals have adapted well to life in an increasingly urbanized landscape, squirrels face many hazards. In addition to being prey for a variety of predators, squirrels are frequent victims of rodenticide poisoning, vehicle strikes, and even BB gun target practice.

Squirrel kits are vulnerable to natural predators like owls, but also the depredations of domestic cats. Young squirrels are frequent collateral damage when trees containing nests are trimmed at the wrong time of year, but they can also be victims of their own curiosity, falling from the nest while trying to get a glimpse of the world.

Brent explained that raising squirrels, especially newborns, is labor intensive. Young kits need to be fed four times a day and are usually cared for by volunteers in their homes, where the young animals can receive the attention they need to survive. When the squirrels are big enough and strong enough to be fed three times a day they are transferred to the CWC’s facility in Malibu Canyon.

“We put them in groups because they are social animals,” Brent told the Messenger Mountain News.

The kits are given special formula, and then weaned onto nuts, fruits, and vegetables. Each squirrel group is moved to an outside enclosure once they are old enough to feed themselves. This gives the animals an opportunity to adapt to a more natural environment, and less contact with humans. When all the squirrels in a group are ready, they are released together back into the wild as a family.

The process from rescue to release takes around three months. It’s repeated in the fall, when a second onslaught of orphan squirrels arrive. Brent said the center has a near 100 percent success rate with orphan squirrels, but it’s also costly. The CWC is currently holding an “Are You Nuts for Squirrels?” fundraising campaign to help care for an anticipated 400 or more squirrel orphans. (https://30583.thankyou4caring.org/are-you-nuts-for-squirrels)

While they are coping with squirrels, the center’s staff and volunteers are already preparing for the annual arrival of spring birds. This year, hatchlings are arriving early.

“We’ve had our first two groups of ducklings already,” Brent said. “And a very early mocking bird. It’s surprising,” adding that she is concerned that the weather may be impacting the breeding season for multiple species.

Brent had a special request for Topanga residents. “We can always use branches,” she said, explaining that fresh branches, no larger than four feet in length, are placed in the enclosures every day, to provide stimulation for the center’s patients and to help them become familiar with materials from their natural habitat.

“Our goal is for every animal to be able to thrive in the wild,” Brent said.

Messenger readers can also help squirrels and songbirds by limiting tree removal and pruning to winter, or at least making sure there aren’t active nests if a tree must be cut at other times of the year.

Brent said she knows that Topanga residents are leading the push for a pesticide and rodenticide-free environment, but that there are other things that can help, like ensuring cats stay inside, and keeping an eye out for fallen nestlings—squirrel or bird.

“We encourage putting squirrels back in the nest if possible,” Brent said. “Or putting them in a secure box high enough up the tree so the parents can come and get them. It’s best for any animal to be with its parent.”

Brent said the staff of the CWC is happy to walk anyone who finds a squirrel or bird nestling through the process of re-nesting it. If the animal is injured or it isn’t possible to re-nest, it’s essential to seek immediate help for the best chance of survival.

To report a wildlife emergency to the California Wildlife Center call 310-458-WILD. To learn more, volunteer, or donate, visit www.cawildlife.org.

California Wildlife Center cares for more squirrels than any other animal. Tax-deductible donations help provide necessary food and supplies to rehabilitate these squirrels until they are big enough and strong enough to be released to the wild.

The CWC is always happy to receive cash donations, but also gladly accept donations of everything from raw nuts in the shell to cotton pillowcases. Amazon shoppers can donate an item from the center’s wish list or sign up to donate through the Amazon Smile program.

The first 20 donors of $250 or more will receive a copy of Lissa Coffey’s book, “The Four Pearls and the Four Squirrels,” as a Thank You Gift!