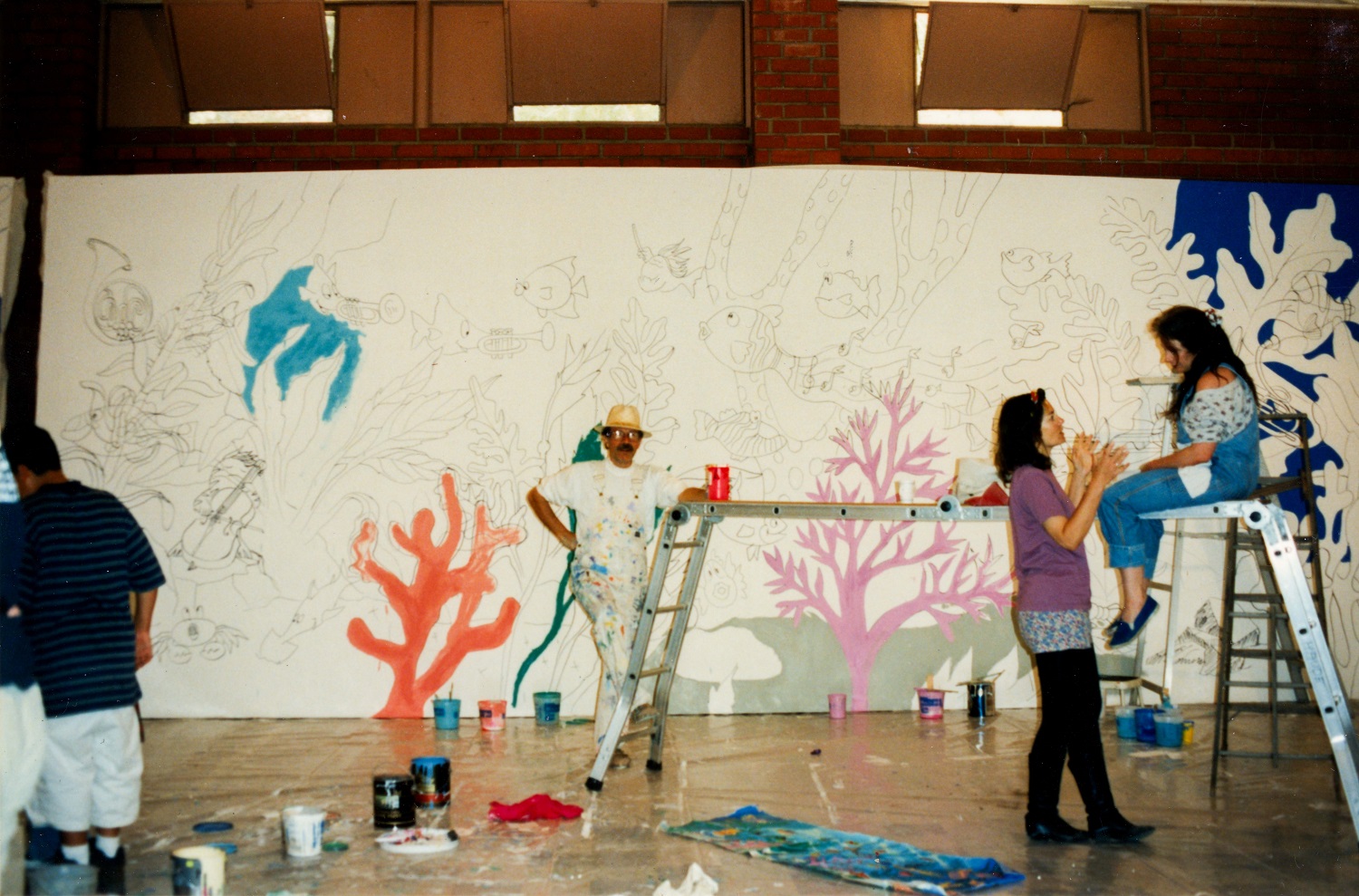 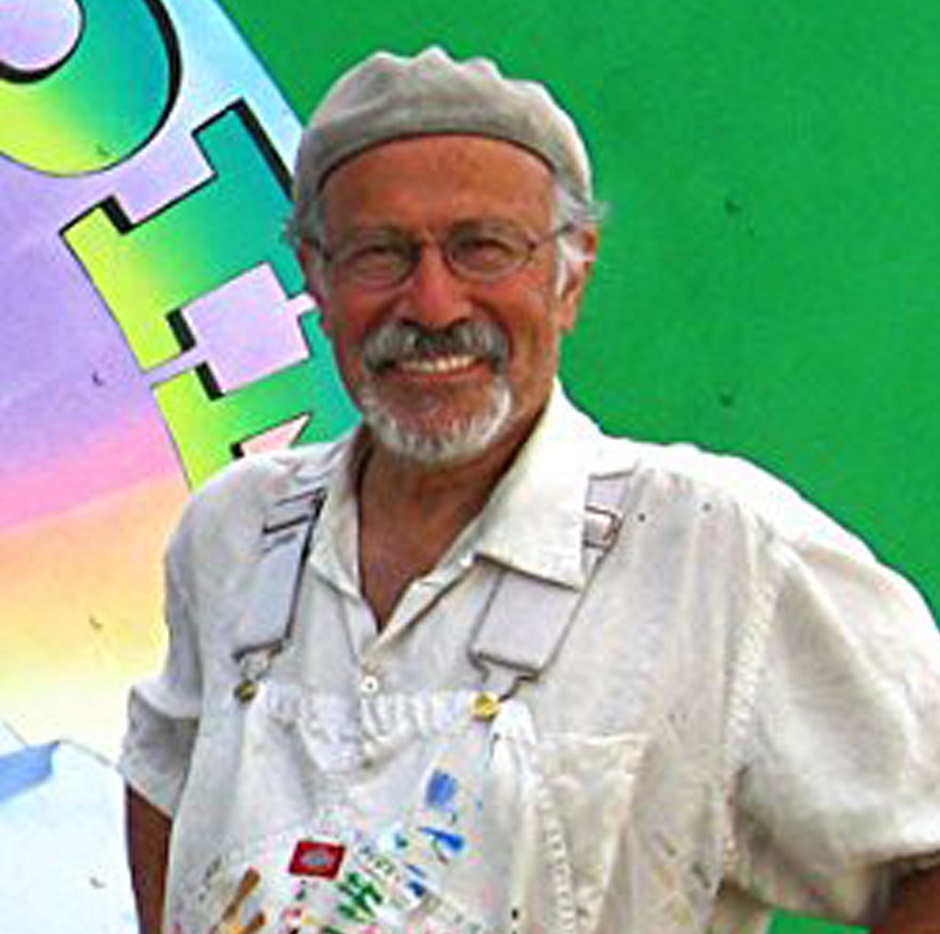 Stewart in his paint-splattered overalls put the kids to work painting the underwater scene for Topanga Elementary’s production of “The Yellow Submarine” in 1994. “He loved doing it. It was beautiful. He made everything beautiful,” said his wife, Lelia. Photos courtesy of the Moskowitz family 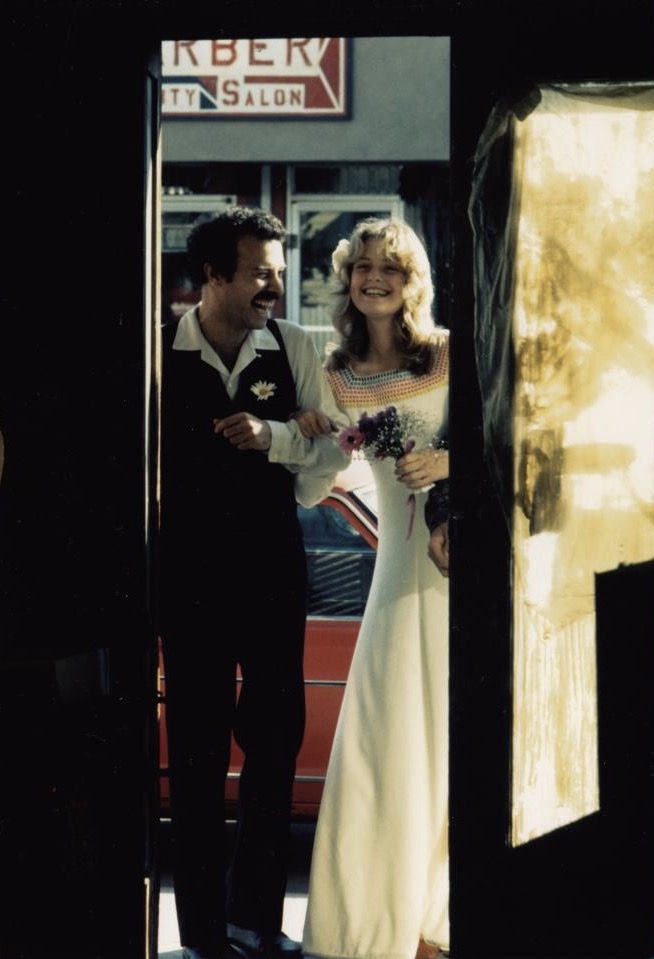 Stewart and Lelia at their wedding in 1976, entering her father’s studio for the ceremony. Notice the sunlight that created a heart on Stewart’s hand. 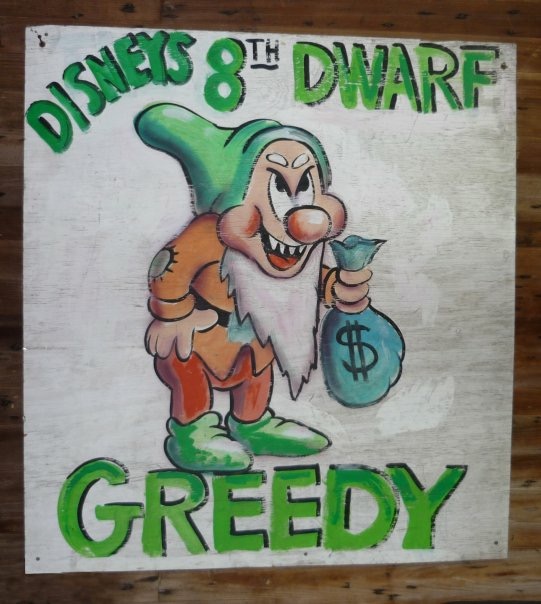 Stewart will always be remembered for this sign by the many Topangans who fought to save Summit Valley. It is credited for Disney pulling out of the project.

Stewart Moskowitz, internationally known artist, died May 23, 2017, at his home in Redway, California. He was born in 1941 with a drive to create art which never left him. With his exquisite sense of design, he worked day—and night—in his studio exploring the possibilities of acrylic on canvas. He produced a vast and far-ranging body of work that reflected his deep and profound sense of humor. Stewart’s charismatic personality engendered loyalty; he radiated warmth and love wherever he went.

Born in Brooklyn, N.Y., his first influences came from his father, a house painter and wood sculptor who carved intricate dioramas. In the late 1950s, when Stewart lived at the Chelsea Hotel, he would go out at night to soak in jazz played by luminaries like Billie Holiday. He attended Pratt Institute and the Art Students League of New York.

In Los Angeles the 1960’s, Stewart studied at Art Center, and went on to receive his Masters of Fine Arts Degree from Otis Art Institute. His master’s thesis, entitled “Animals in a Children’s World,” expanded on his approach of creating art with the simplicity and curiosity of a child, coupled with the knowledge of an adult. In San Francisco, in the late 1960’s, Stewart was part of the ferment of the Haight-Ashbury.

In 1976, Stewart married Lelia Frimkess in the Venice, California, studio of her father, ceramicist Michael Frimkess. They raised their four children in Topanga Canyon, where they lived for 26 years before moving to the North Coast of California in 2002.

During the heyday of the poster market millions of Stewart’s images of whimsical animal characters were sold. His art was especially popular in Japan in the 1980s, where he traveled regularly for decades and was celebrated in museum and gallery shows. Stewart’s work has been used to represent Fuji Film, Mitsubishi, Sakura Bank, Japan Airlines, Suntory, and more. Simon and Schuster published four children’s books Stewart wrote for his characters.

After moving to the North Coast, as he expanded his array of subjects and statements, his art began to be influenced by politics and the local pot culture, as well as the stunning landscapes of the area.

Stewart is survived by his wife Lelia, their children Tia, Myla, Sachi and Louie, and grandchildren Kayvan and Layla.

There will be an event to honor Stewart on July 8, at 11 a.m., hosted by Peter Connelly in Humboldt County, California. For more information please see Stewart Moskowitz’s facebook page.

Donations may be made in Stewart’s name to: Heart of the Redwoods Community Hospice.org, Sanctuary Forest.org, or Planned Parenthood.org. Thank you.

We loved that guy. He came to my door the day after our Summit Valley victory with a self-portrait in neon paint he knew I loved and gave it to me as a thank you. They lived for years in the Glenview neighborhood overlooking Summit Valley. We did an interview up on Stewart’s roof with the Daily News about the battle. He also is the father of the “8th Dwarf Greedy” sign and carried that sign to our protest march at Disney’s Burbank Studios, where, a week before the final hearing, we (children, moms and dads) marched beneath the building [that is] enshrined with all seven dwarfs. “Greedy” went viral before there was an internet, and showed up in a couple of news stories about Michael Eisner, then CEO of Disney, well after the battle. It was also rumored, but never verified, that Eisner picked up the phone and called the RETLAW folks (the developers) the day of our little march, urging them to stop the development because it was giving Disney a bad name. Our signs read: “They make nature shows, but it’s nature they bulldoze,” and “Save our Bambis, save our Thumpers.”

Memorial Day is about heroes and sadly we lost one of our own local heroes on May 23 when renowned artist Stuart Moskowitz passed from this world. Stewart supported all our local causes for many years and he designed two of our Topanga Days t-shirts. For those of us who know the Moscowitz family, I ask that we take a moment to send our love and support through the air to them today as we enjoy another beautiful Topanga Days together.