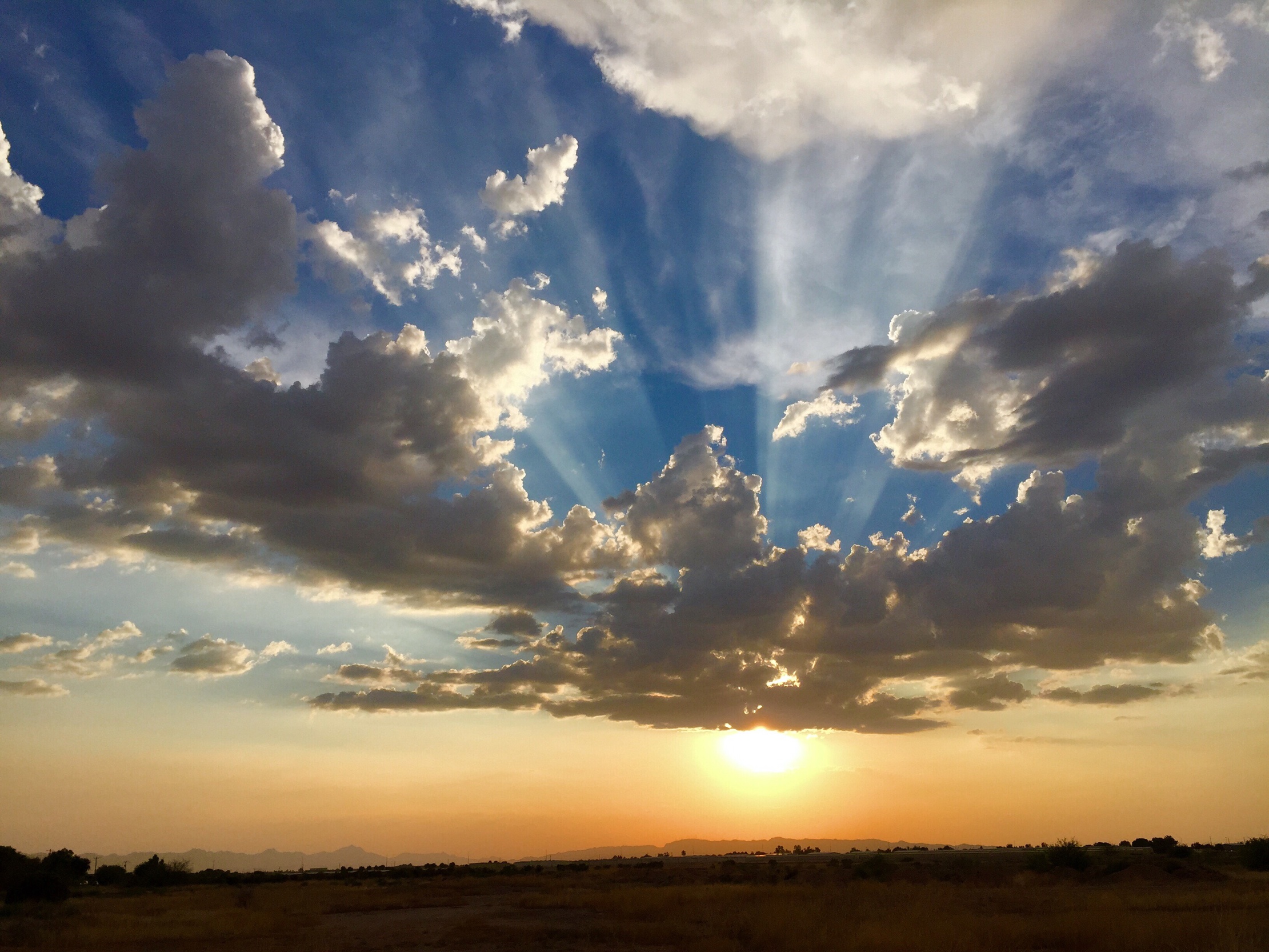 Sunbeams over Kernville, CA. I had taken a break from playing music with my friends and was getting ready for dinner. I looked up saw this amazing splash of sunbeams. It only lasted about twenty minutes but captured everyone’s attention and was the talk of the evening meal. Photo by David K. Lynch 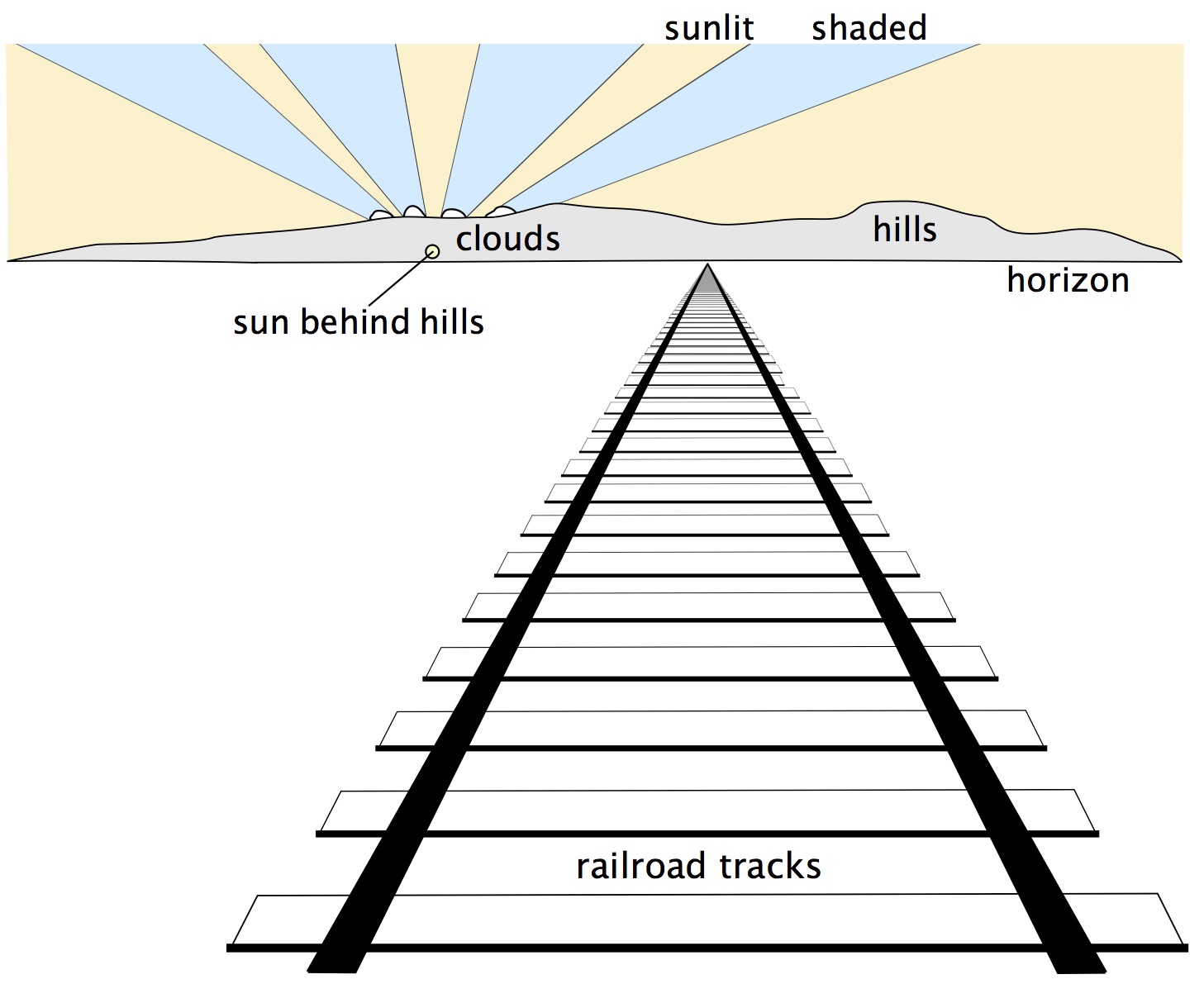 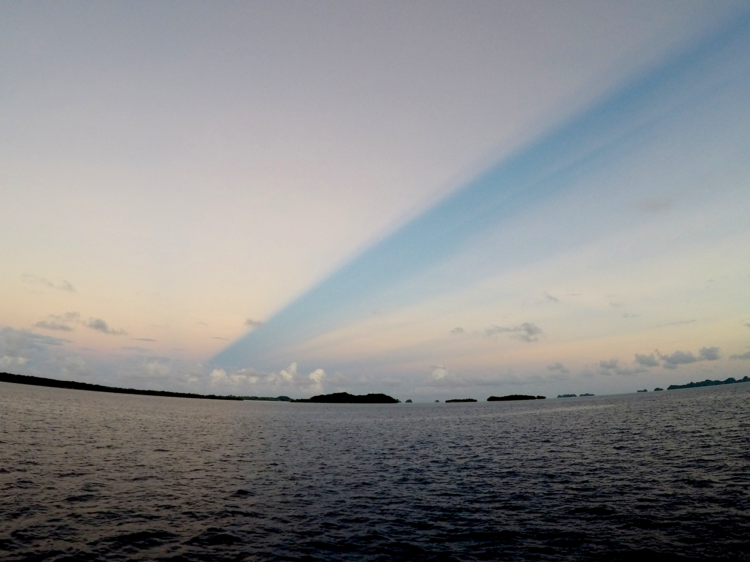 Anticrepuscular ray over Palau. It was our first night on the dive boat and everyone was on deck getting to know each other. The sun had just gone down and a great blue streak gradually appeared crossing the entire sky and settling on the horizon opposite the sun. “What is it?” someone asked. “That”, I said “is the best anticrepuscular ray I have ever seen.” Photo by David K. Lynch

We’ve all seen them. Rays of light coming from the sun like spokes on a wheel. They go by many names: sunbeams, angel lights, rays of Buddha, ropes of Maui, sun drawing water. Their official name is crepuscular rays. “Crepuscular” means “twilight”, and the rays are so named because we most often see them near sunrise and sunset.

Sunbeams are caused by shadows of clouds cast upon a slightly hazy atmosphere. Look at the little cloud in the middle of the picture. Stretching up and slightly right of it is a dark blue band. This is the cloud’s shadow. The cloud to the right is doing the same thing, casting its own blue shadow. Between them is a bright ray, a sunbeam! It is bright because the sun is shining directly on the haze in the sky, and the haze particles reflect sunlight.

The rays appear to radiate from the sun, converging to it like arrows in the sky. This is the result of perspective because the rays are exactly parallel to each other. It’s like railroad tracks. Each rail is parallel to the other, but together they seem to converge to a distant, triangular point on the horizon.

Sometimes the clouds are not visible because they are over the horizon but their shadows give them away. Even when the sun is high in the sky, sunbeams can sometimes be seen around little clouds, especially if they are near the sun.

Now here’s the really cool part. Just like when you’re standing  on railroad tracks, those tracks extend both directions. Same for sunbeams. So the next time you are enjoying a great sunbeam display, turn around and face the opposite direction. You will see the beams converge to the opposite horizon. They are usually fainter and less easily seen, but they are always there.

And the Winner is...