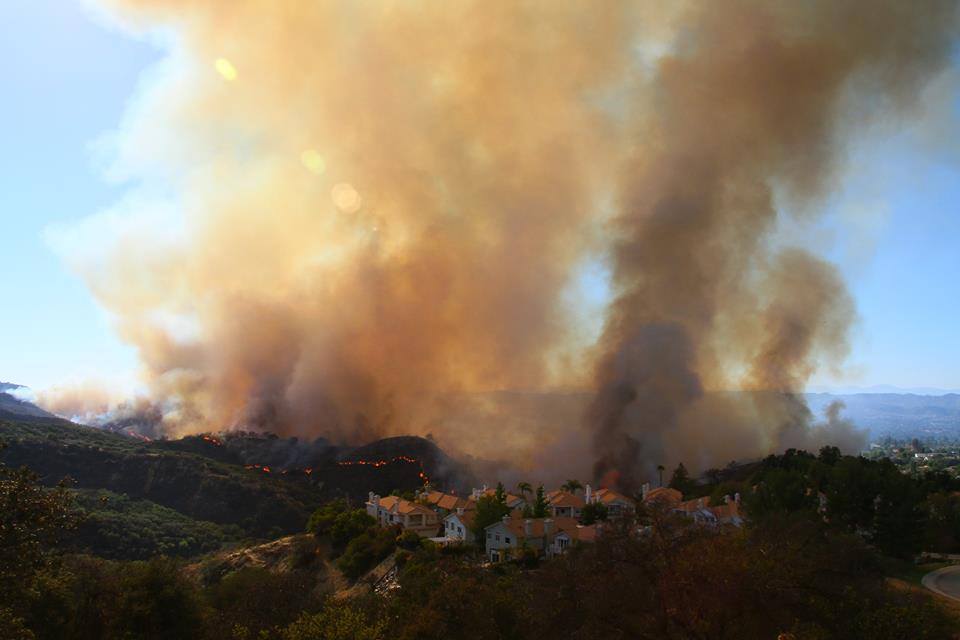 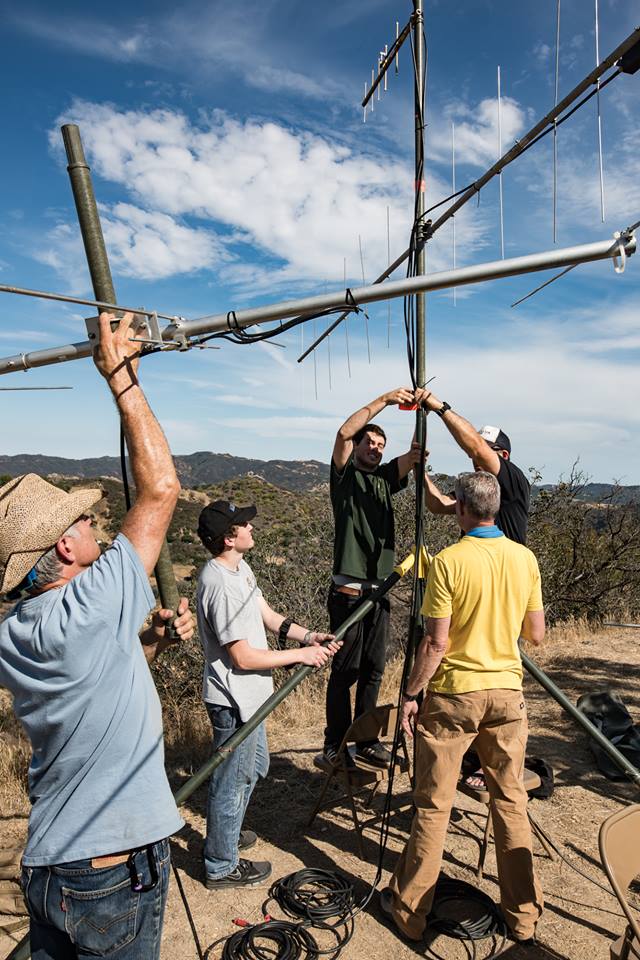 Every year members of DRT participate in a nationwide HAM radio contest. Here they are putting up the antenna. Photo courtesy of TCEP 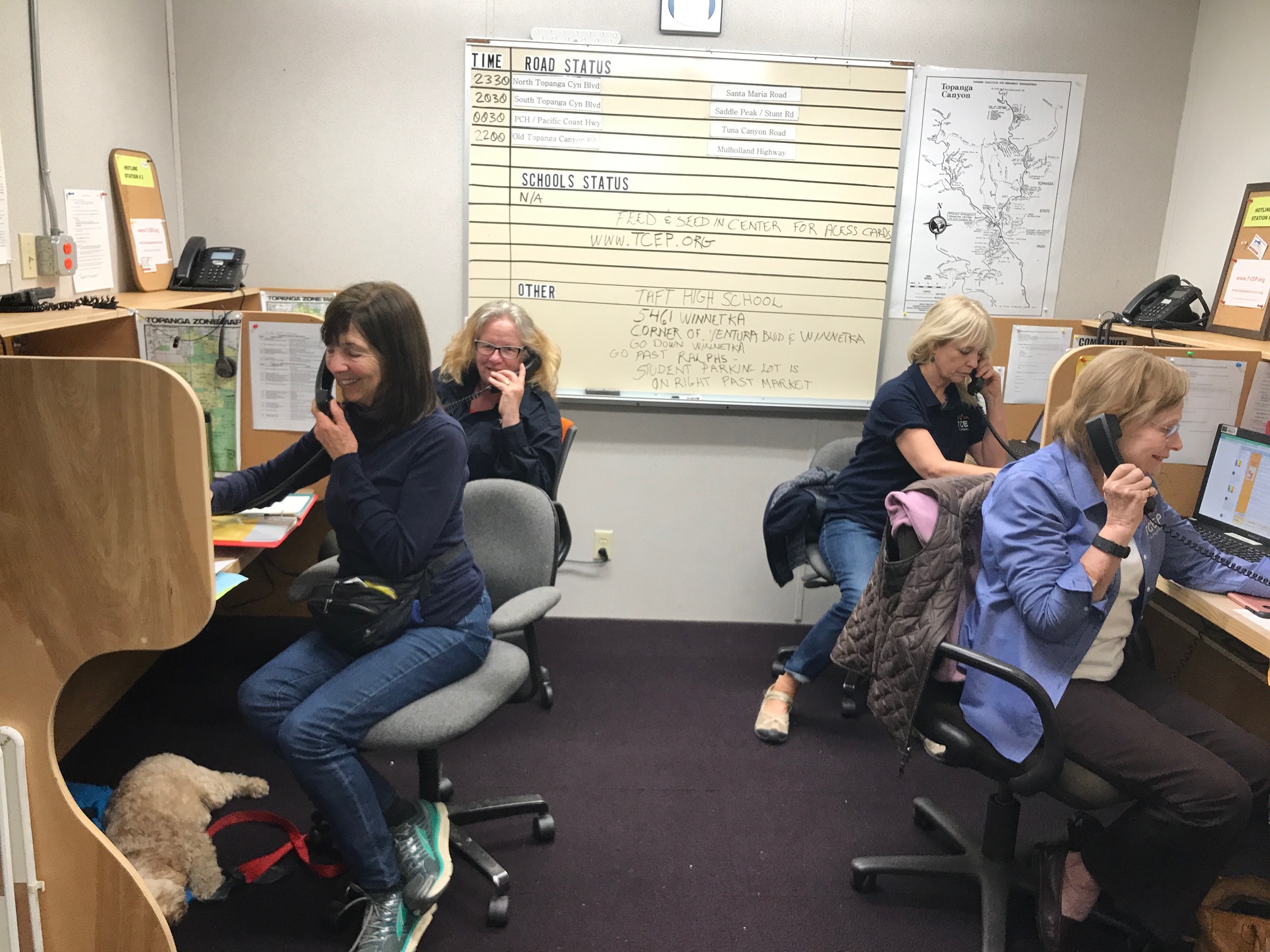 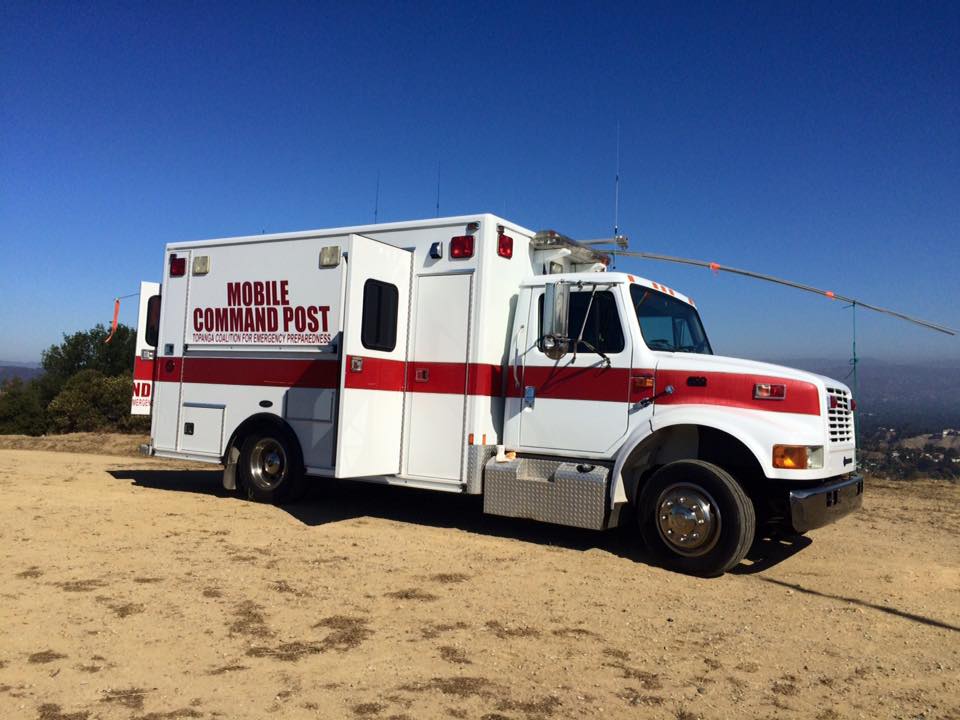 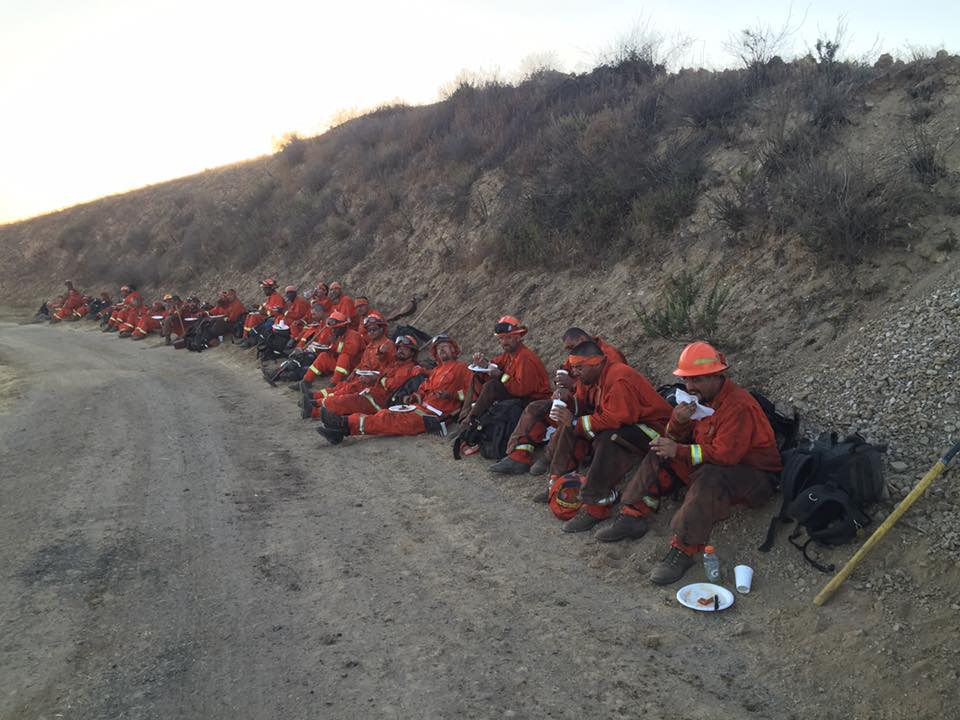 The brave firefighters who saved our homes take a break. Photo courtesy of TCEP 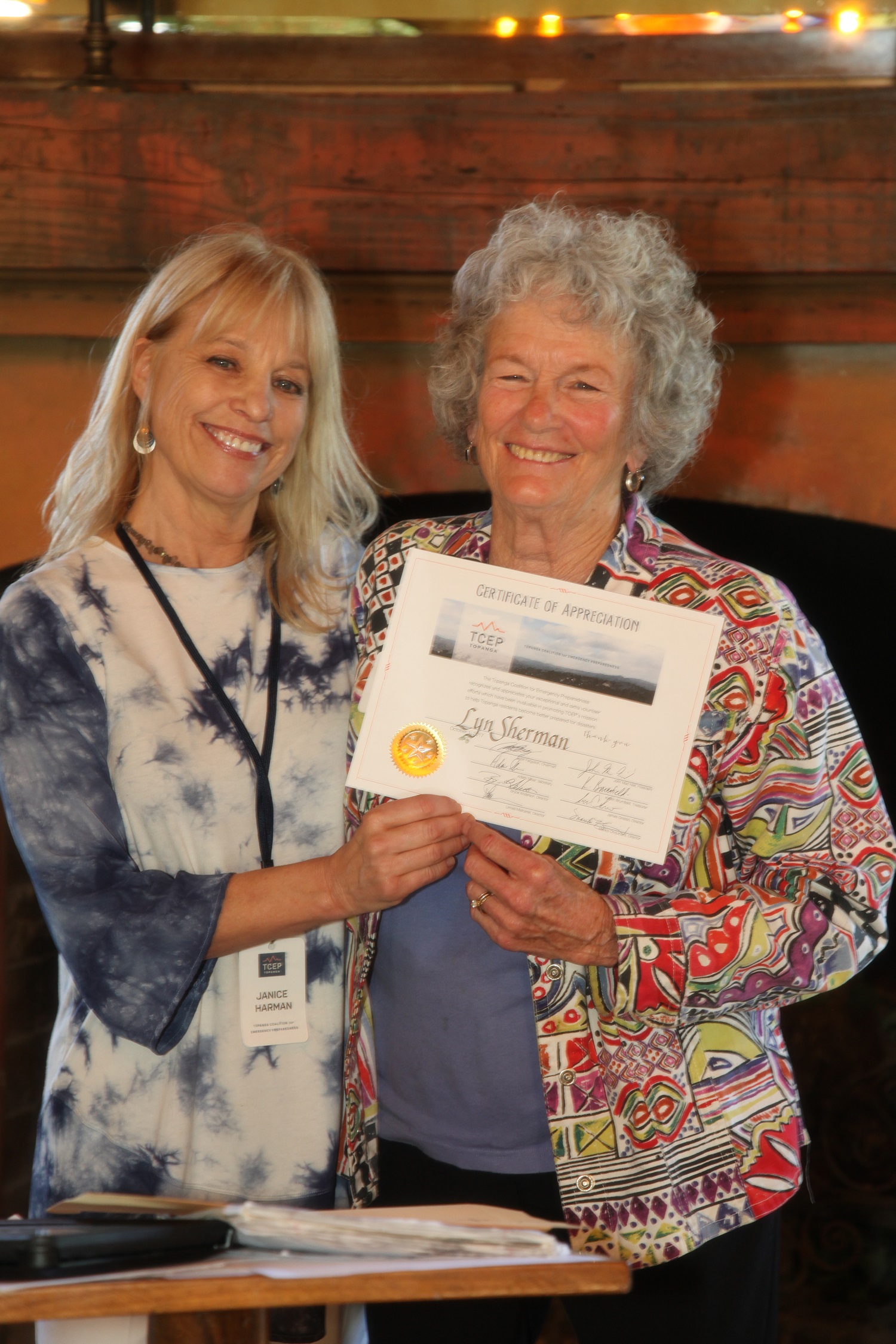 Long-time volunteer Janice Harman presents a certificate of appreciation to Lyn Sherman as Hotline Volunteer of the year. Photo by Tony Verebes

Wildfire. If you’ve never met one, you don’t want to. What you do want is to be prepared for the certainty that a fire, earthquake or flood will happen. Meet the dedicated volunteers of the Topanga Coalition for Emergency Preparedness (TCEP.org) and learn how to even the odds.

It’s fire season and, in case you haven’t noticed, the Red Flags are flying—up north and south of us in Orange County—but also here in Los Angeles County.

We have been fortunate in our local mountains. Most of the recent fires have been on low-wind days, but the Santa Anas are blowing, the brush is dry, and humidity is low; the perfect formula for a bad fire day.

Many of us who have lived in Topanga for a while remember the 1993 wind-driven fire that burned for 10 days from the top of Old Topanga Canyon to the coast in Malibu destroying more than 300 homes, scorching thousands of acres, and taking the lives of three people.

Realizing that inaccurate information went out during the ’93 firestorm, a group of volunteers, led by Pat and John Mac Neil, Gabrielle Lamirand, Fred Feer and Susan Nissman (who, a year later, became Senior Field Deputy to Supervisor Zev Yaroslavsky), created the Topanga Coalition for Emergency Preparedness (TCEP) with a “mission to give enough accurate and verified information to help you make smart decisions and possibly save your life.”

THE FIRES AROUND US

Last year, Topanga was threatened by the Old Fire in Calabasas that burned up to, but not over the Summit at the north end of the canyon. Zone by zone, sheriffs and firefighters went door to door warning people to evacuate; some were voluntary others were mandatory.

This year, over the Fourth of July weekend, the Old Fire at PCH burned 55 acres on a steep grade with heavy vegetation that hadn’t burned for 100 years. Had it not been for the air support from Topanga’s 69 Bravo Heliport, firefighters and ground crews, it could have rampaged through the Palisades and Topanga State Park.

On September 9, there were three brush fires threatening Topanga and Malibu, two at Pacific Coast Highway at Rambla Pacifico and Corral Canyon, that Fire Station 69 was responding to when another blaze, the Powderhorn Road Fire, caused by a downed power line (see “It’s a Bad Day for Fires,” Vol. 1, No. 18, September 22, 2017), started at a residence. It was held at bay, mostly with shovels by residents who were trained members of TCEP, until Engine 269, Topanga’s volunteer Call Firefighters, on duty at the station house, responded.

For those who have recently moved to Topanga—for its beauty, its closeness to nature, solitude, the view—there’s a learning curve to understanding that you live in a Wildland-Urban Interface (WUI) that is designated a “Very Severe Fire Hazard” zone.

The mantra is: Prepare!

“Think of preparation, not as a chore, but insurance,” says TCEP Chair Scott Ferguson. “When you take out insurance on your car, it’s not because you know you’ll have an accident. Meanwhile, if you do, then you know you’re covered. It’s the same with being prepared for a disaster.”

“We’ve been lucky,” he says. “All of the fires we’ve had so far happened on low-wind days. It’s dangerous to live here,” he says. “Be responsible and take steps to live here safely. When you are warned to evacuate, leave! Better yet, get out early. It’s the difference between living and dying.”

Soon, residents will receive the L.A. County “Disaster Survival Guide,” an invaluable resource for creating and maintaining a fire-safe environment in the WUI. It has everything you need to know, and do, to prepare and prevent.

Even now, while we prepare for the holidays, the TEM Task Force is preparing for the annual emergency drill next spring when all county agencies, their educational staff and everyone involved in emergency planning will provide the community a time and place to practice their skills.

In between emergencies, TCEP volunteers are eager to host community meetings for hands-on training sessions. For instance, TCEP held a successful meeting with SAGES seniors to help them set up their phones with emergency contacts. It also oversees the Neighborhood Networks and urges everyone to contact TCEP to set one up in their area.

TCEP also encourages people to have multiple lines of communication. When your land line doesn’t work, you can send texts on your mobile phone. Add the PulsePoint app on your mobile phone for updates. During emergencies, TCEP pushes out information on Twitter, Facebook, TCEP.org and its Hotline. Keep a battery or solar radio at hand and tune in to KNX for updates.

The more people who know what’s going on, the easier it is on the first responders—those professionals on the front lines fighting the fires, providing EMT services, evacuation warnings and traffic control to keep access open to emergency vehicles.

In case of evacuation, and TCEP volunteers have to evacuate, they have a fully equipped mobile EOC communications van and will soon have a 24-foot mobile trailer that will be stationed at the Incident Command Post during an emergency.

Ferguson notes that “LA County Fire Department (LACoFD) views TCEP as an example of how citizens can create an organization that helps first responders push out information during an emergency.”

WHAT YOU CAN DO

In TCEP, residents can find a volunteer team that matches their interests and concerns so they are ready to respond to a specific aspect of a disaster. The average tenure of a volunteer is three years but TCEP has members who have been with it for five, seven and 20 years. That is a tremendous amount of experience for a volunteer organization and probably why they’re so good at what they do.

A Cautionary Tale from Topanga’s History

When Civil Defense Became Disaster Defense. In 1946, well after WWII was over and the Topanga Protection Committee became the Topanga Disaster Committee, it responded once to a fire in 1949. In August of 1956, it was reactivated as a unit of the Civil Defense organization and the Topanga Canyon Basin was divided into six sectors with volunteers who could be called upon in time of disaster.

The first test of the new procedures was during a major fire in Malibu, December 27-30, 1956…. Around 6 p.m., [Topanga] did not seem threatened, but as a precaution, the sectors were alerted. At about 9 p.m., a “Sig-Alert” bulletin on the radio stated that the sheriff had ordered evacuation of Topanga Canyon. This was later found to have been an error, but as William H. Barrett reported, “The evacuation of Fernwood proceeded under what amounted to panic conditions.”

While trying to evacuate, there was a period of approximately one hour, Barrett reported, “during which all of Fernwood Pacific Drive and lower Topanga Canyon Boulevard were blocked solid with traffic and it would have been virtually impossible for fire equipment to have traveled into the precinct from the south or up Fernwood Pacific Drive….” For two hours, telephone communications both in and out of the canyon broke down completely. By midnight 500 to 700 people had evacuated Fernwood. The following night…, “the wind had shifted and the canyon was again put on alert, but by December 29, the danger was past.”

Variations of this scenario in which officials act without consulting local volunteer organizations repeated many times in the course of emergencies and supposed emergencies. In the 1990s, after years of such confusion, as a response to this lack of organization and preparedness, TCEP was born.

Excerpted from “The Topanga Story—Expanded Edition”

Once Upon a Time…