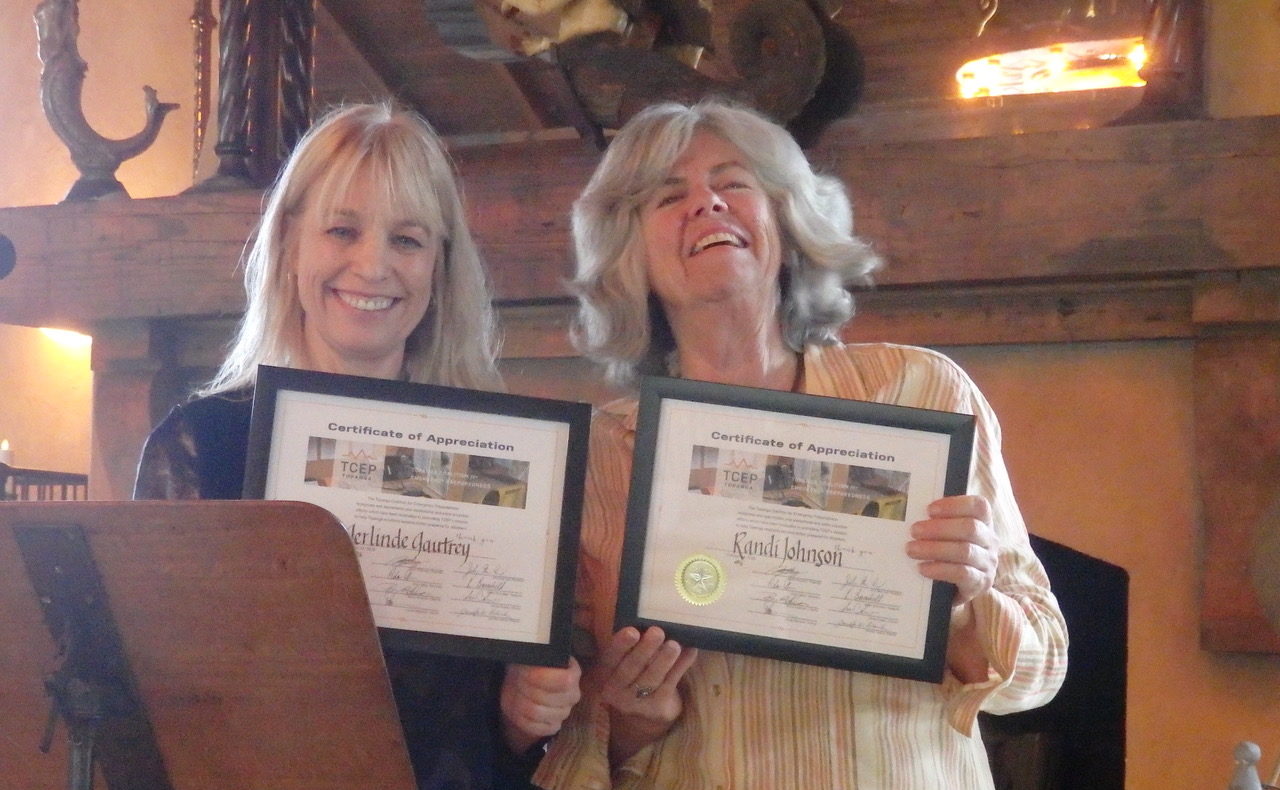 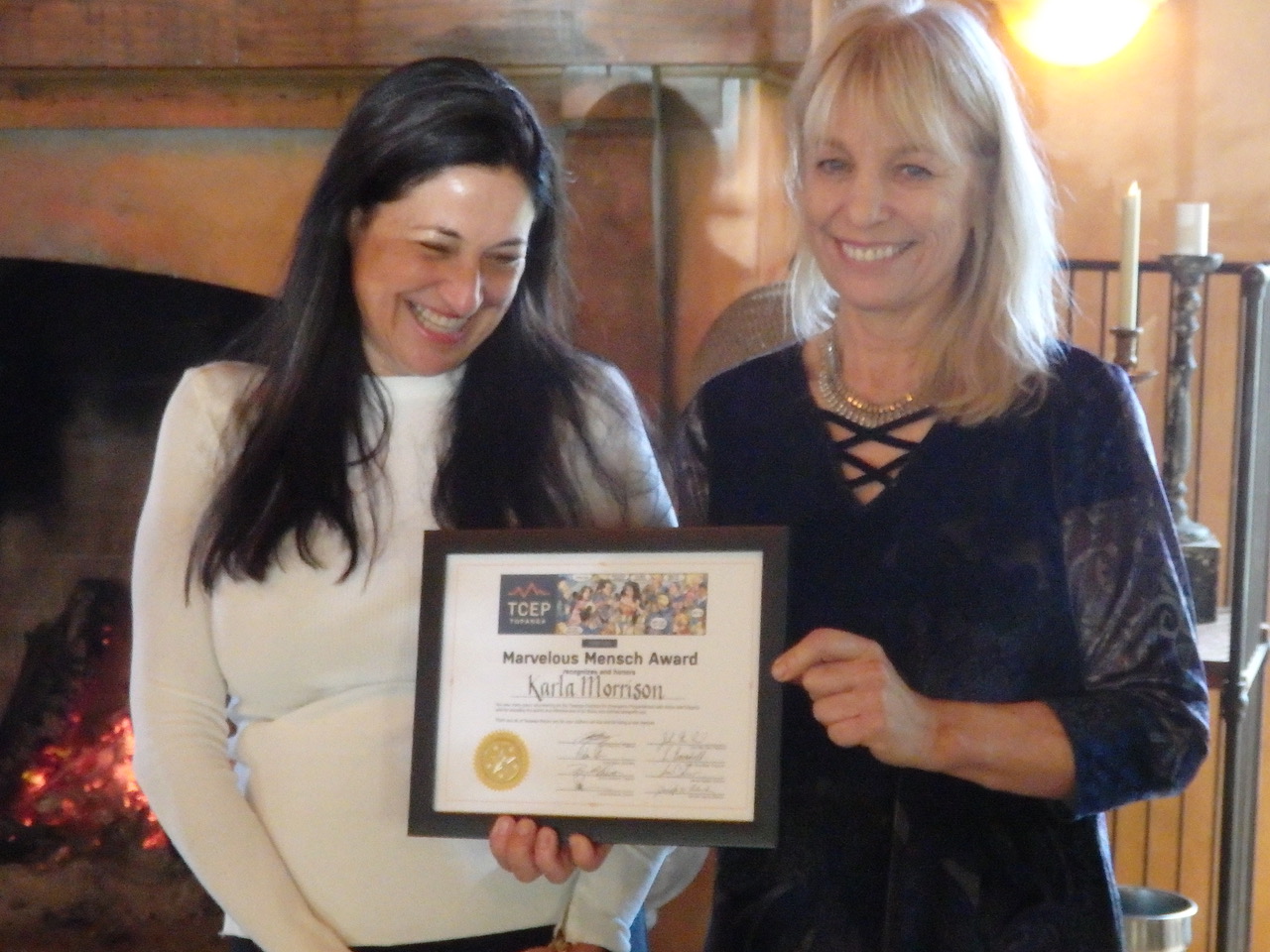 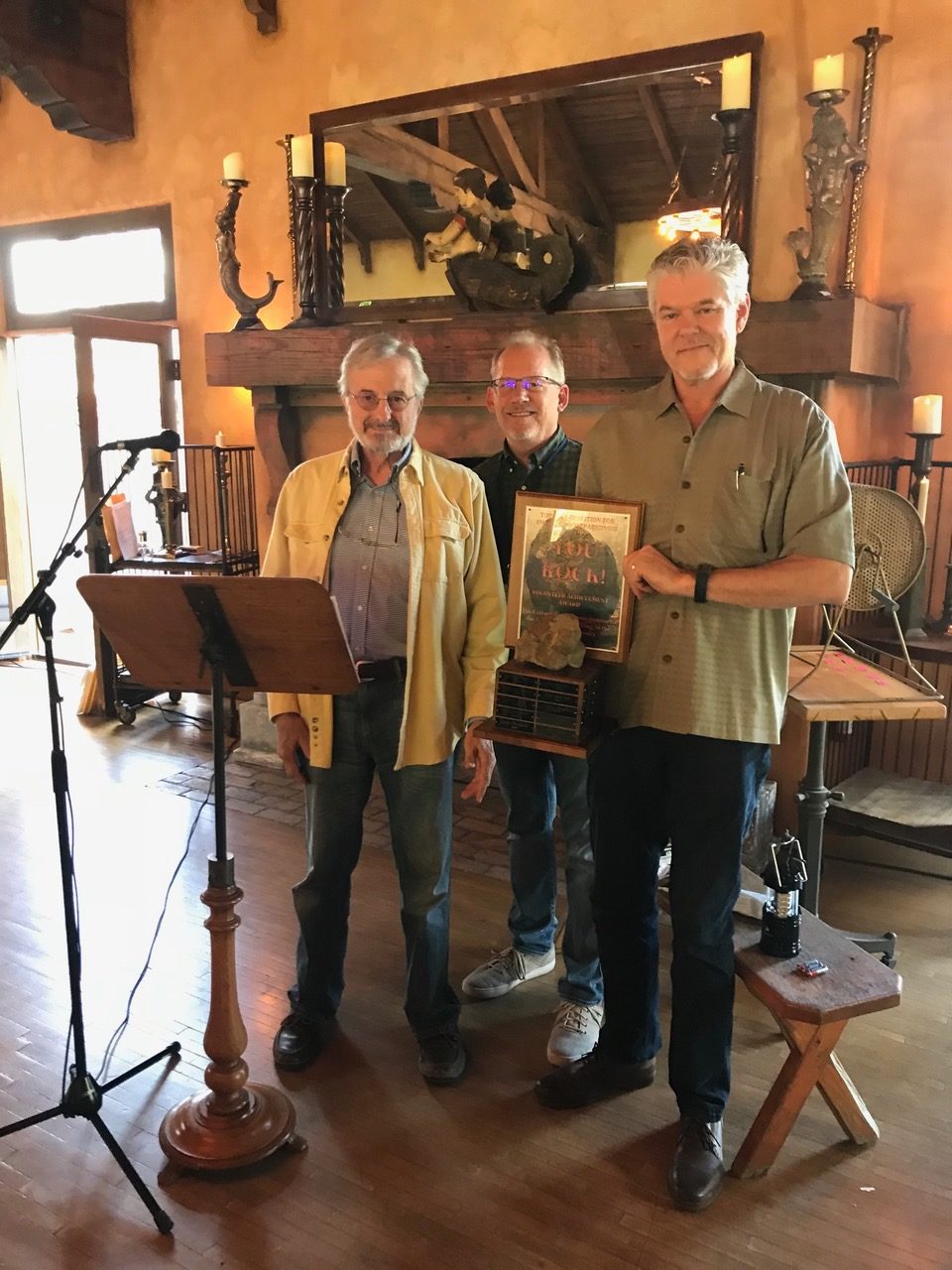 Above, (l-r) Terry Cox, Scott Ferguson and Bryce Anderson with the "You Rock" award. Photo by Bill Buerge 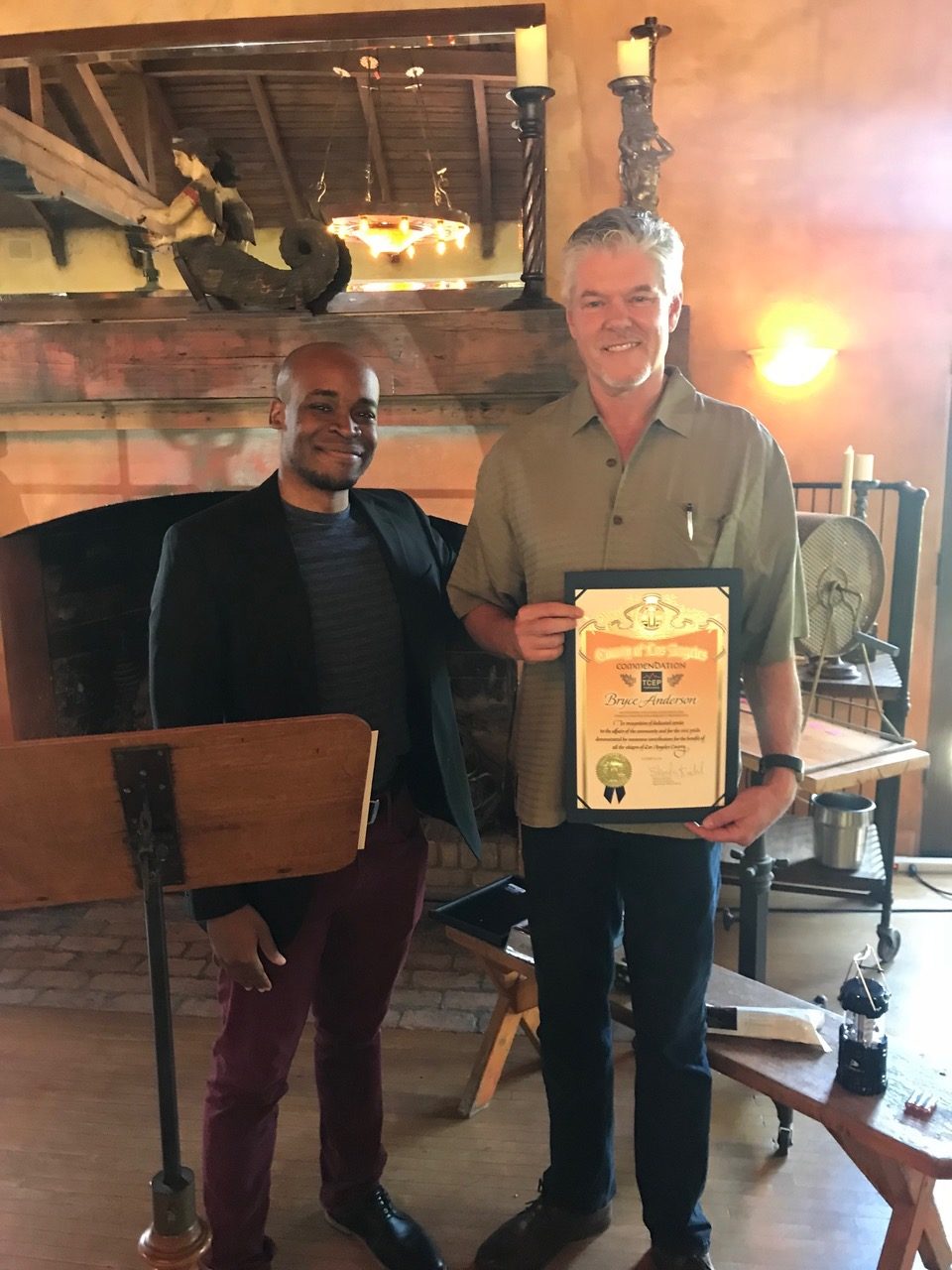 More than fifty volunteers and friends gathered at the Mountain Mermaid on Sunday, Oct. 14, for the Annual Topanga Coalition for Emergency Preparedness (TCEP) Volunteer Appreciation Brunch.

With their 24/7 Emergency Hotline, HAM radio skills, First Aid and emergency training, Topanga’s TCEP volunteers are uniquely qualified to offer accurate and potentially life-saving information to Canyon residents in the event of a fire, flood or earthquake. Simply put, these are the people you want to know in an emergency! The brunch, hosted by Bill Beurge and Gail McTune, started with a delicious buffet from Serves You Right Catering by Michele Gan (www.syrcatering.com).

TCEP Board Chairman Scott Ferguson began the awards ceremony by introducing the award recipients and presenters.

“We have been doing this for 25 years, due in large part to the solid infrastructure set up by Pat and Jack Mac Neil,” Ferguson said as he gestured to the much-honored couple.

Bryce Anderson followed with a PowerPoint presentation about the recent renovation of TCEP’s Emergency Operations Center (EOC) and presented an award to its main donor for the construction, Tom Hinerfeld and AMG Construction Company, who worked for more than two months to rebuild the center.

“I saw a building that not only was leaking, but was a fire hazard,” Hinerfeld said as he received his award. “They wanted me to fix the water issue. We ended up making the command post fire retardant. Now, it has the survivability of an hour in a fire; that was my contribution to such a great organization.”

Kristin Brumfield spoke of the next volunteer in glowing terms, as a “mensch,” someone to admire and emulate, in short, a good person: Topanga’s ubiquitous volunteer, Karla Morrison.

“She grew up in Canada, the oldest of nine siblings. She is an accomplished chef and catered a dinner for Princess Diana and Prince Charles. She also served Mikhail Gorbachov his first lobster.”

Morrison was unable to attend but was honored for her numerous volunteer efforts with the Topanga Chamber of Commerce; the Topanga Woman’s Circle; Topanga Days; Topanga Sages Holiday Dinners (which she started); “Pass the Parm,” a Topanga Elementary fundraiser; the annual chili dinner for Station 69; and her work with TCEP on the Disaster Radio Team and the Hotline.

“I volunteer and support community events by rolling up my sleeves and doing what needs to be done,” Morrison said in a statement read by Brumfield.

“The Hotline Team was the way TCEP communicated before the Internet,” Janice Harmon said when honoring Randi Johnson and Gerlinde Gautrey as the current Hotline Coordinators. Harmon outlined a scenario of a fire or a Red Flag day in the mountains, when cell phone service, Cable, TV, and the Internet are out, but luckilyin those days, the hard-line phones still worked.

“Don’t panic, because on your refrigerator, there is a phone number (310) 455-3000 and that is the TCEP hotline you call and actually get a live operator,” Harmon said. “Randi Johnson and Gerlinde Gautrey stepped up to help by updating the Hotline and being on call 24/7. Let me tell you something: underneath their calm façade are a couple of tigers.”

“Simon T is not officially a typical TCEP Volunteer,” Ferguson said. “Yet he helped the entire community single handedly when he created 69Bravo,” the unique facility at the top of Saddle Peak that allows Los Angeles County Fire, Topanga, Malibu, and surrounding communities fight fires.

“He is in a lease/purchase agreement with Los Angeles County because 69Bravo contains two helipads with a landing/approach windsock and lighting; eight fire hydrants along the property perimeter; a water well that serves two separate 6,000-gallon pumpkins for helicopter water extract by firefighting helicopters, and a 10,000-gallon water tank which serves to maintain water in the pumpkins,” Ferguson said, adding that the facility now has high-speed fiber Wi-Fi connectivity and is expanding its command center with a weather station and water management system. (Learn more at 69Bravo.com)

“TCEP also has a HAM radio repeater up there,” he said. “As Simon T couldn’t be here, I am accepting this on his behalf; this is the first annual Bravo Award.”

Terry Cox presented the Volunteer of the Year achievement award, presented to those who go above and beyond the call of duty. The 13 people who have received this award in the past is a Who’s Who of TCEP volunteers.

This is the “You Rock” award, a plaque with a piece of the 25-foot-high, 300-ton boulder that fell a mile up from PCH on the S-curves and blocked Topanga after a devastating landslide in 2005. “When they tried to blow it up the first time, it just made the hole in the road bigger. The second time they were successful,” Jack Mac Neil recalled.

“Bryce does whatever needs to be done and he has had a positive impact on TCEP on a regular basis,” Cox said. “He is always available and ready to help, he uses his initiative, imagination, and common sense. He sees something that needs to be addressed and addresses it; and things just seem to happen. He is a board member, has been Treasurer, and works as a property and logistics manager.

“What is critical, he is the disaster radio team director, leading the DRT in designing, maintaining, and providing radio consistency. He leads in supporting amateur radio at 69Bravo, creating it as the DRT’s state-of-the-art radio repeater site, and so much more working with the Lost Hills Sheriff’s Station.”

Anderson hoisted the “You Rock” award, saying, “I accept this selfishly, because I get to meet and deal with all of these great people. Thank you.”

Anderson also received a County Declaration from Blake Clayton of Supervisor Sheila Kuehl’s office and a Declaration from Assemblyman Richard Bloom’s office, presented by Tim Pershing: “In recognition of the fact that his was a self-inflicted commitment to that prominent disease of TCEP volunteers—selflessness.”

With that, the audience roared with laughter and gave Anderson a round of applause.

In response to a genuine disaster, Pat Mac Neil, Gabrielle Lamirand, and Vic Richards formed TCEP after a devastating arson fire swept through the Canyon in 1993. Since then, it has grown into a well-respected, highly organized, and essential part of the community interacting with county and state agencies in times of emergencies to keep Topanga informed and safe.

Currently, TCEP operates from the newly renovated emergency operations center (EOC) that is prepared to communicate with the various governmental departments during a natural disaster or local emergency.