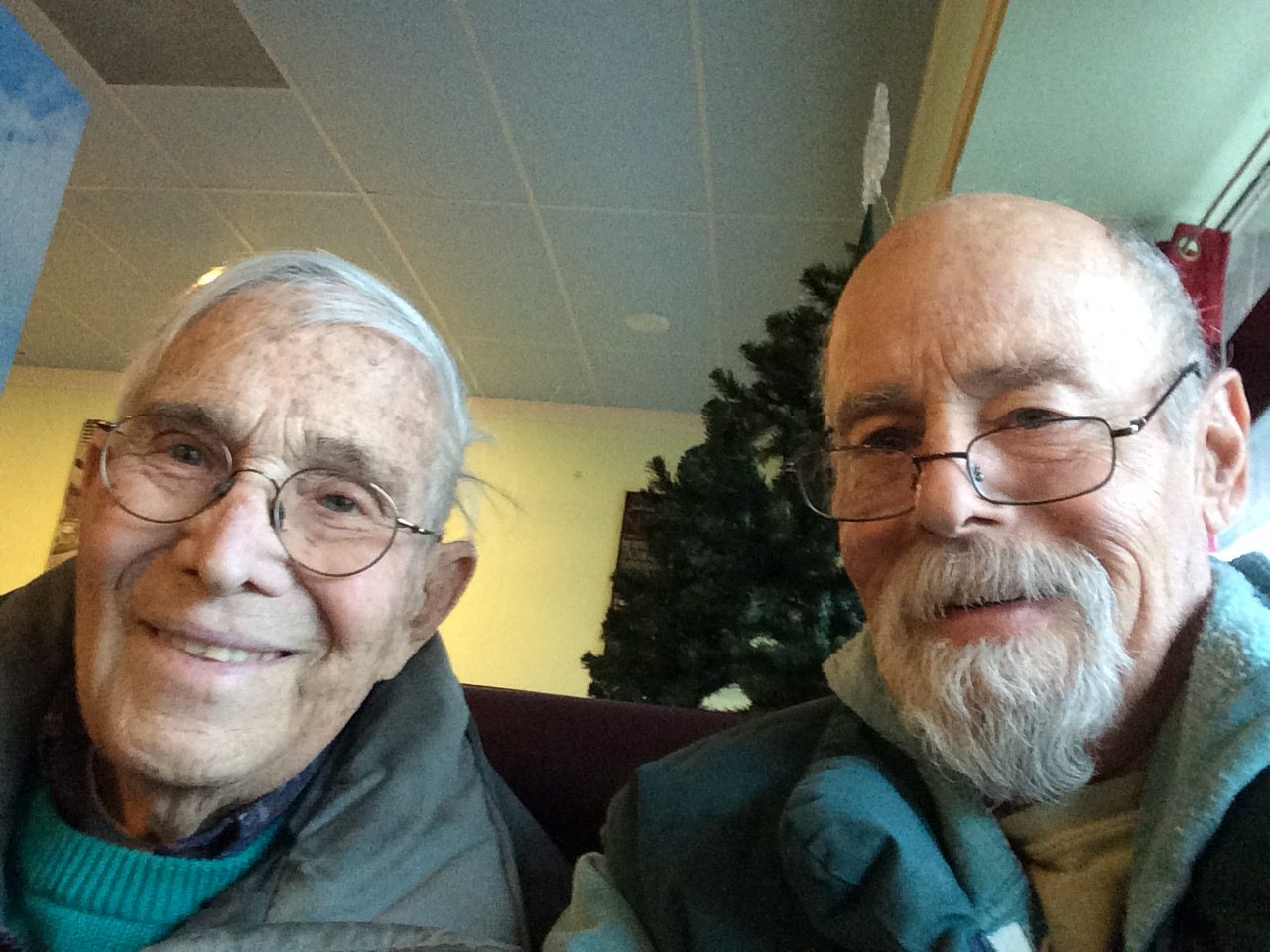 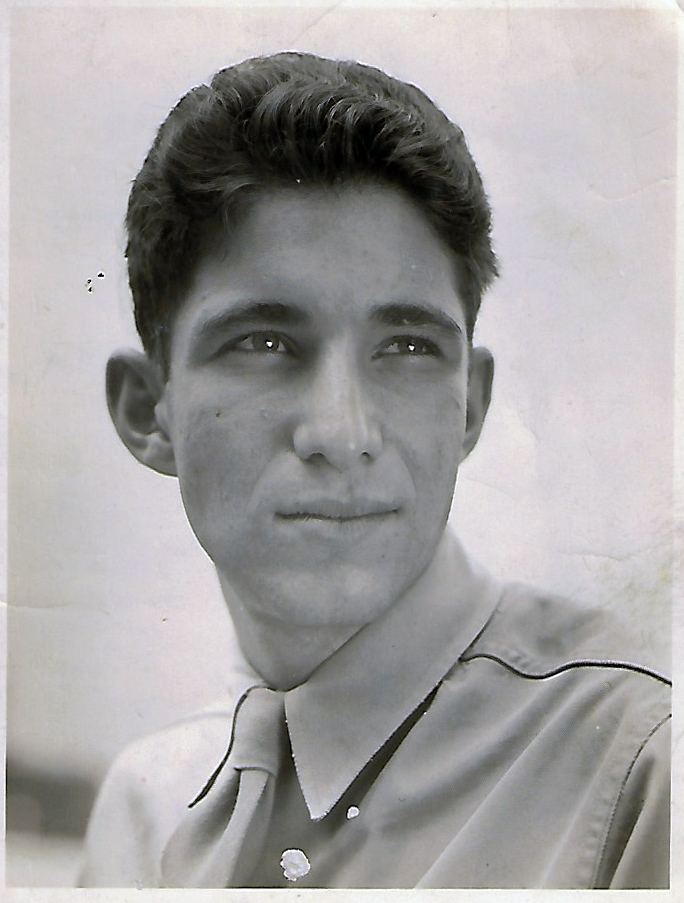 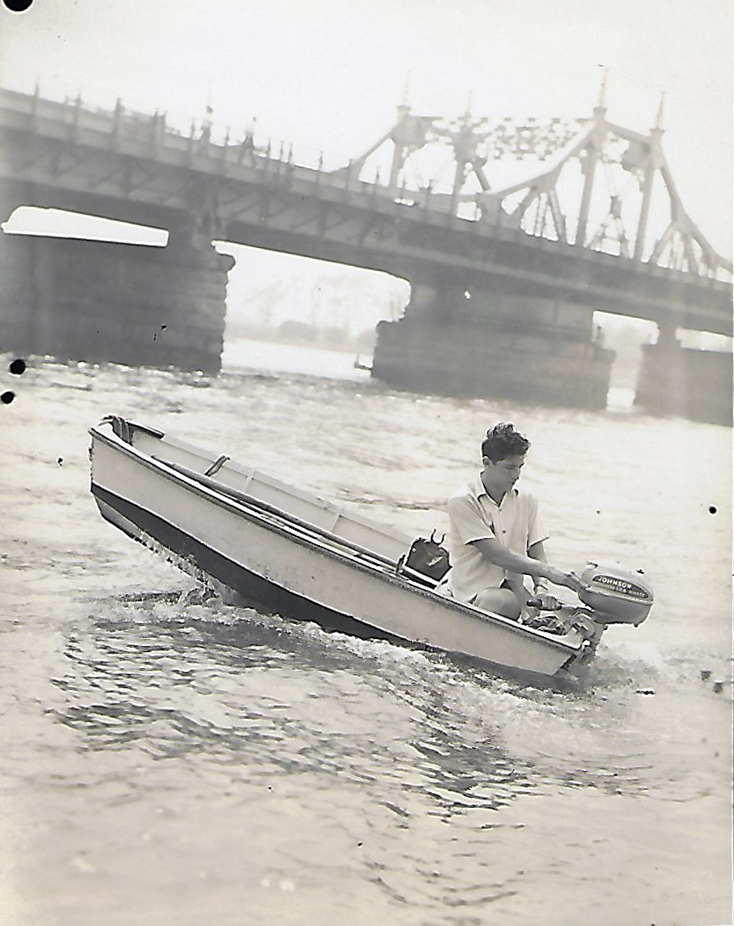 At age 12, Karlin was a good sailor and used to motor around Manhattan Island. 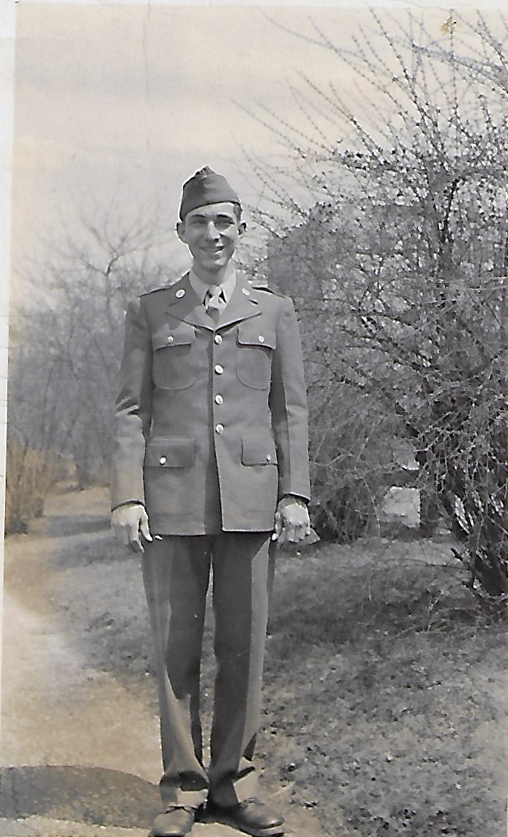 The day Karlin wore his uniform for the first time. 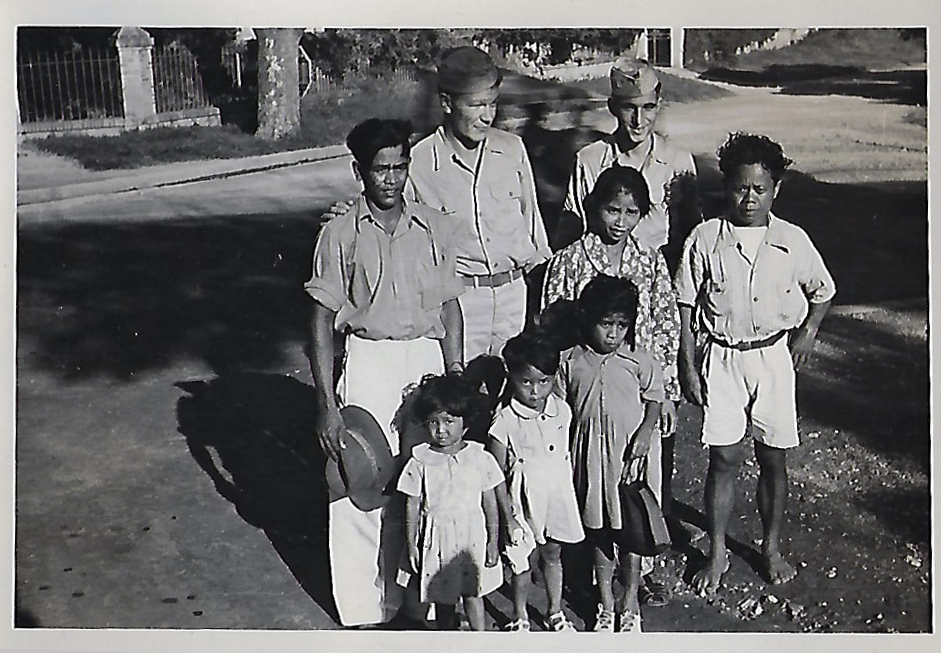 (Top right) Norm Karlin was deployed as a photographer to New Caledonia that provided invaluable support to the U.S. Southwest Pacific Campaign. 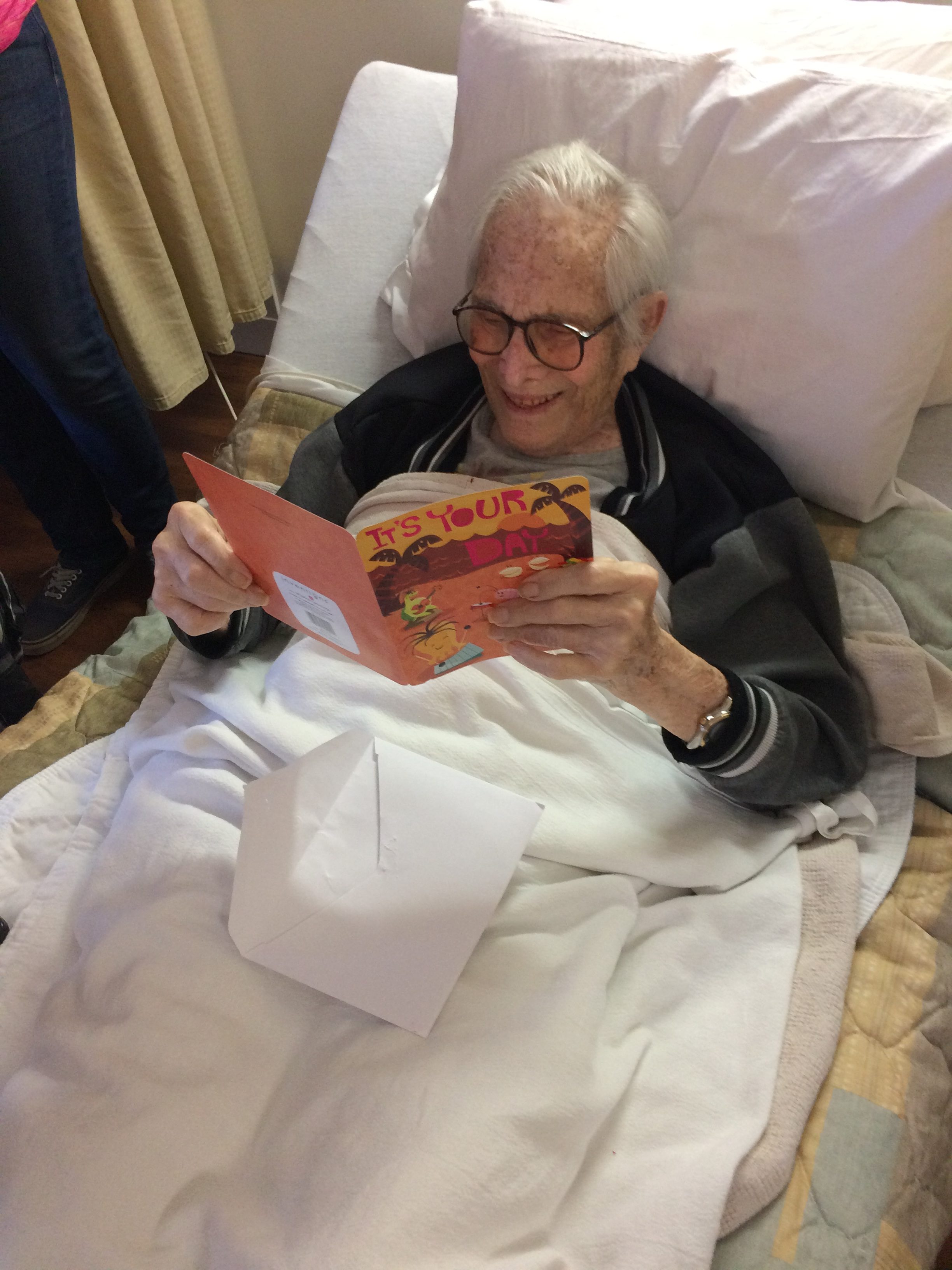 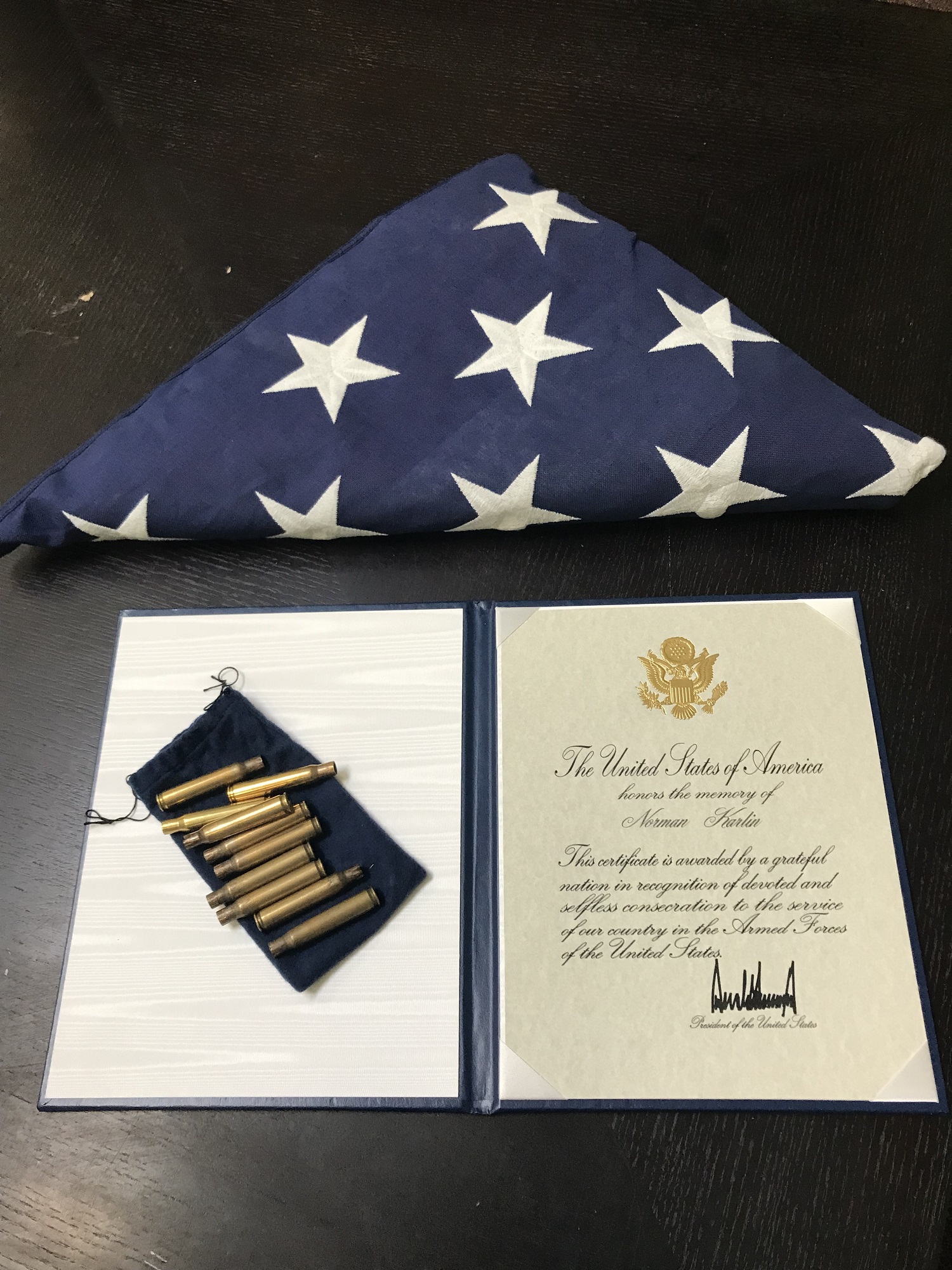 The folded flag and shell casings from Norm's military funeral. 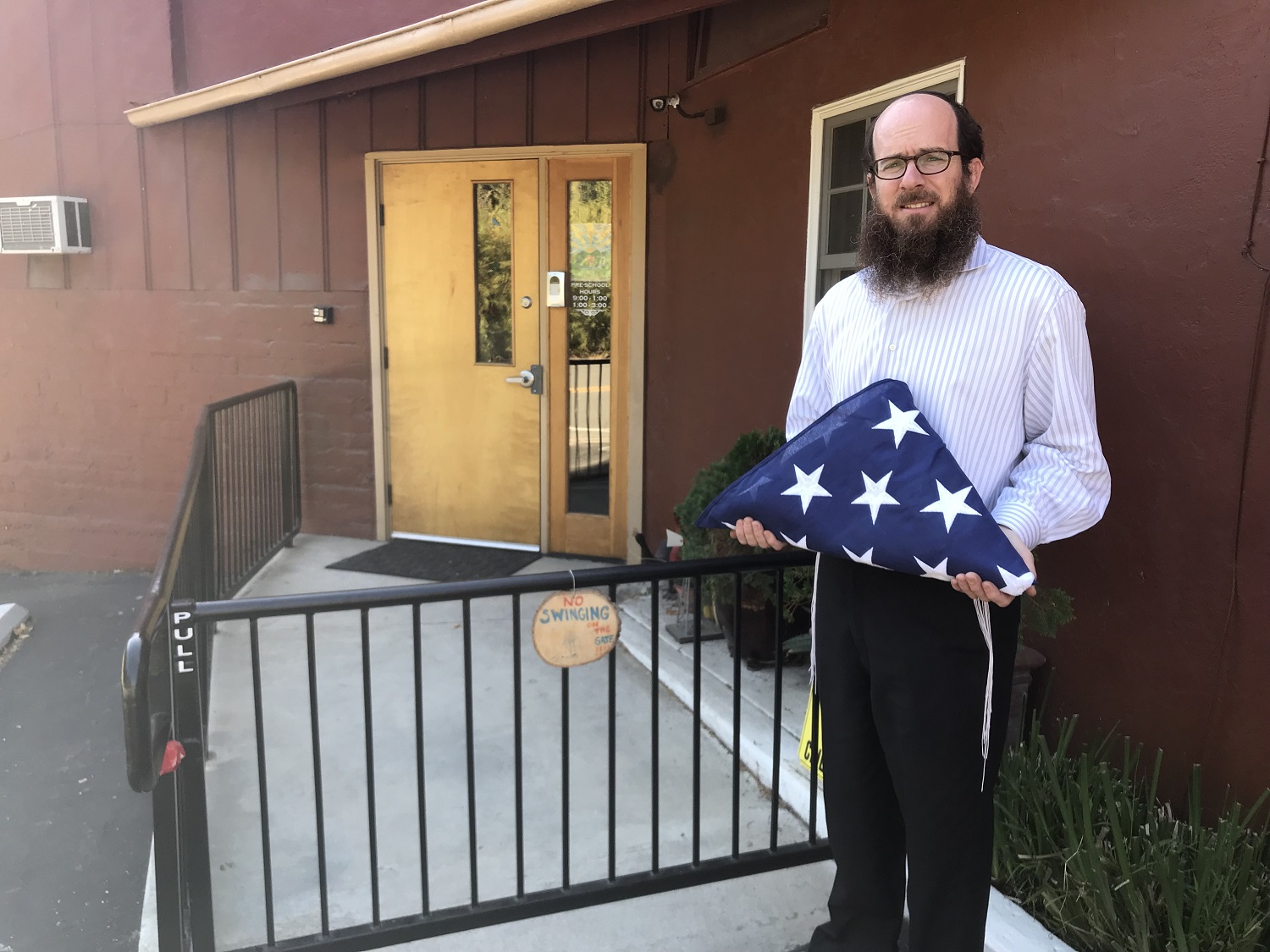 November 11 is Veterans Day. For the Messenger Mountain News, it is an opportunity to honor and remember two Topanga veterans who passed this year, who after serving their country, served the community where they chose to live out their lives, each in his own way. Today, we pay tribute to Norman Karlin who served in the Pacific in World War II. Karlin passed away on April 27, aged 93.

With great appreciation to his longtime friend, Ron “RD” Denend, and Rabbi Dovid Weiss of the Topanga Chabad and his wife, Dina, who runs the Montessori school, who knew Karlin for 16 years. Their memories paint a loving portrait of this unassuming quiet man who loved life, his country, and his community.

The Messenger Mountain News will publish a Tribute to Clark “Corky” Moss, a Vietnam era veteran, in the November 16 issue.

Norm was born January 25, 1925 and grew up in the Bronx when it was country. By the age of 12, he was sailing around Manhattan island from the East River to the Hudson and back. His father taught him to shoot a Remington rifle that would stand him in good stead when he was drafted into the Army at 18.

In training camp, since Karlin learned to shoot with the same Armyissued Remington rifle he learned on, he was regarded as a marksman. The Army was ready to deploy him into active duty in the Pacific, but instead, he was tapped as the model for the Army training manual.

When he was deployed, it was not to active duty but as a photographer in the Army Signal Corps to document the war zone in the Pacific. He was stationed on New Caledonia, an island in French Polynesia that was “in the crosshairs of the Japanese, who were trying to sever Australia’s supply line with America by seizing Fiji, New Caledonia, and Samoa.

“There was no fighting on New Caledonia. As a major island with a protected port and enough space to establish base facilities, a hospital, supply depots, and airfields, it was invaluable to the U.S. Southwest Pacific campaign. It allowed training and logistical support for nearly everything that went to recapturing the Solomons and assisted in every major campaign up to the invasion of Okinawa.”

After his discharge, Karlin earned a degree in geology from Syracuse University (New York), but in 1953, he moved to New York City to pursue a career as a film editor. His first job was as a “gofer” for Cinerama. Eventually, his career took him to Los Angeles and in 1969, he won a National Academy of TV Arts and Sciences award for sound editing on an episode of “Gunsmoke.” He acknowledged that he owed it all to the training he received in the Army.

Around 1968, he discovered Topanga and bought the 28 acres known as Three Waters Ranch, that was deeded in 1867. It had three natural springs and was used for cattle roundups.

Karlin rented the property to studios for a number of major motion pictures featuring stars such as Burt Reynolds, Keith Carradine, Melanie Griffith, Keanu Reeves, and others. In 1975, he split the property with his neighbors, Frank and Mike Kelly.

The cabin, built in 1898, would remain Karlin’s home for fifty years until his death.

“He didn’t change anything on that place,” said RD, who met Karlin in 1971, when the community was fighting a trailer park development and produced a play, “Showdown at Fork Tongue Canyon.” Karlin produced it as a silent partner. Over a two-week period, the play raised $3,000 for the Topanga Association for a Scenic Community (TASC) in its fight against development. (“The Topanga Story: Expanded Edition,” p. 348)

RD lived on and maintained Karlin’s property and the prop house for many years even though he had property of his own where he was building a house.

Karlin and Norm Krause kept American Legion Post 796 open until its membership dwindled and it was handed over to the Pacific Palisades Legion Post 283.

When Post Commander Krause died, Karlin and John Swenson alternated year to year as Commanders. In 2004, the Legion donated $2,000 toward the publication of “The Topanga Story,” and $10,000 to the Community House Senior Center.

“Norm arranged that donation. He loved the Community House,” said RD. “He was the silent partner of so many things we took for granted in the old days.”

RD wanted to make clear that Karlin did not die of Alzheimers. “I watched my father for eight years as he deteriorated. Norm may not have remembered what he had for breakfast, but he still talked about the old times.

As a congregant, Norm Karlin often attended Friday night Shabbat dinners, Hannukah, and other holidays with the Weiss family.

He was very proud of his ranch. When he came to Topanga, he saw the ranch, and bought it as is. Never changed (or “improved”) anything. There were no bells and whistles, just an old bridge over the creek and the land.

“He loved walking the property and renting it out to the Hollywood studios where a number of feature films were shot during the ‘60s and ‘70s. His favorite part of having the film crew there? ‘Lunch,’ he said. ‘The caterers were great.’”

We all smiled as the couple called up their memories.

One studio built a “prop house” on the property and left it there. “Norm would go there, put on the heater and a jacket, and watch TV.”

“His morning ritual was to get his mail at the post office, drive up to the Community House—he loved the Community House—read the mail, then go to Pat’s Grill for breakfast with his friends. When his eyesight failed, and he was told he couldn’t drive any more, he missed that ritual, so if no one was around to drive him, he would drive anyway: to the post office, the community house, and to Pat’s Grill for breakfast.

Her husband picked up the thread. “When something went wrong, he’d shrug and carry on. Even when people built a house above him and changed the course of the creek through his property. He wasn’t happy, but he let it go. The greatest thing was his passion but I never heard him say a bad word, even when he was angry.”

Rabbi Weiss remembers Karlin as an all-round happy person who retained his sense of
humor to the end. “When his vision started going, he would say, ‘Maybe the doctors will give me a new eye.’” RD unceremoniously put an end to that fantasy.

Norm was not an alcoholic but he would attend Alcoholics Anonymous meetings “for the
company and cookies.”

“When he was in the care facility, I would visit and he would ask if I ‘came to see the AK ‘(alte kaker in Yiddish, politely translated as “old man”).

Rabbi Weiss officiated at Karlin’s military funeral at the Riverside National Cemetery. He rode in the hearse and when the driver, who had already driven to other funerals that day, said he was tired, “I offered to drive. There I was with Norm in the back. It seemed so right.”

The presentation of the flag also included the ten shell casings from the military salute and a certificate that reads: “The United States of America honors the memory of Norman Karlin. This certificate is awarded by a grateful nation in recognition of devoted and selfless consecration to the service of our country in the Armed Forces of the United States.”

At the graveside ceremony, a tractor usually fills the grave, but Jewish ritual dictated otherwise.

“We asked if we could have shovels as part of the Jewish tradition instead of them using the tractor to bury him,” said Weiss. “They agreed, and we shoveled the dirt in. It was intimate. I felt I was able to provide the best and highest for Norman.”

Veterans Day is observed every year on November 11. It was originally called “Armistice Day” when President Woodrow Wilson proclaimed this day in November 1919, at the end of World War I, when hostilities ceased on November 11, 1918, at the eleventh hour of the
eleventh day, of the eleventh month. On May 13th, 1938, Armistice Day was declared a legal holiday dedicated to the cause of world peace. On November 11, 1947, Raymond Weeks, a World War II veteran, organized a “National Veterans Day” parade in Birmingham, Alabama, to recognize veterans of all wars. This celebration led to Congress changing Armistice Day to Veterans Day in 1954 to recognize Veterans of all U.S. wars.

Memorial Day is for remembering and honoring military personnel who died in the
service of their country, particularly those who died in battle or as a result of a wound sustained in battle.

Veterans Day is intended to thank all those who honorably served in the military in war- or peacetime.

The Veterans Day National Ceremony is held each year on November 11th at Arlington
National Cemetery. The ceremony commences precisely at 11 a.m. with a wreath laying at the Tomb of the Unknowns and continues inside the Memorial Amphitheater with a parade of colors by veterans’ organizations and remarks from dignitaries. Read more.

A Place to Visit on Veterans Day

On Veterans Day at precisely 11:11 a.m., November 11, the sun’s rays will pass through each of the five pillars’ elliptical openings to illuminate a glass mosaic medallion of the Great Seal of the United States.

Honor Our Veterans on November 9