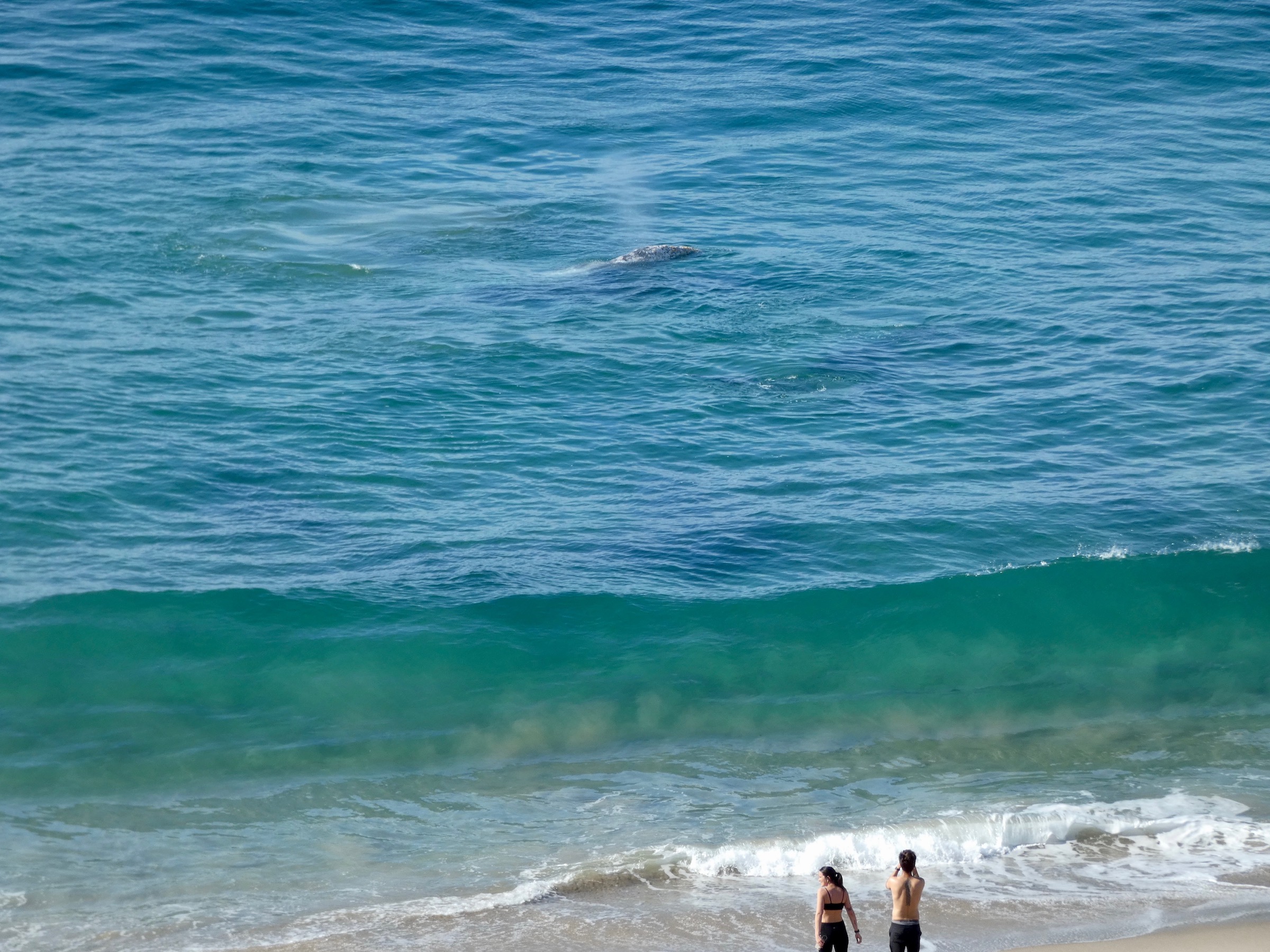 Close encounter. Whale watchers on the beach get a close look at a gray whale just offshore. This is the only time of year an encounter like this can happen. The gray whale migration peaks in March, but continues through April and often into early May. 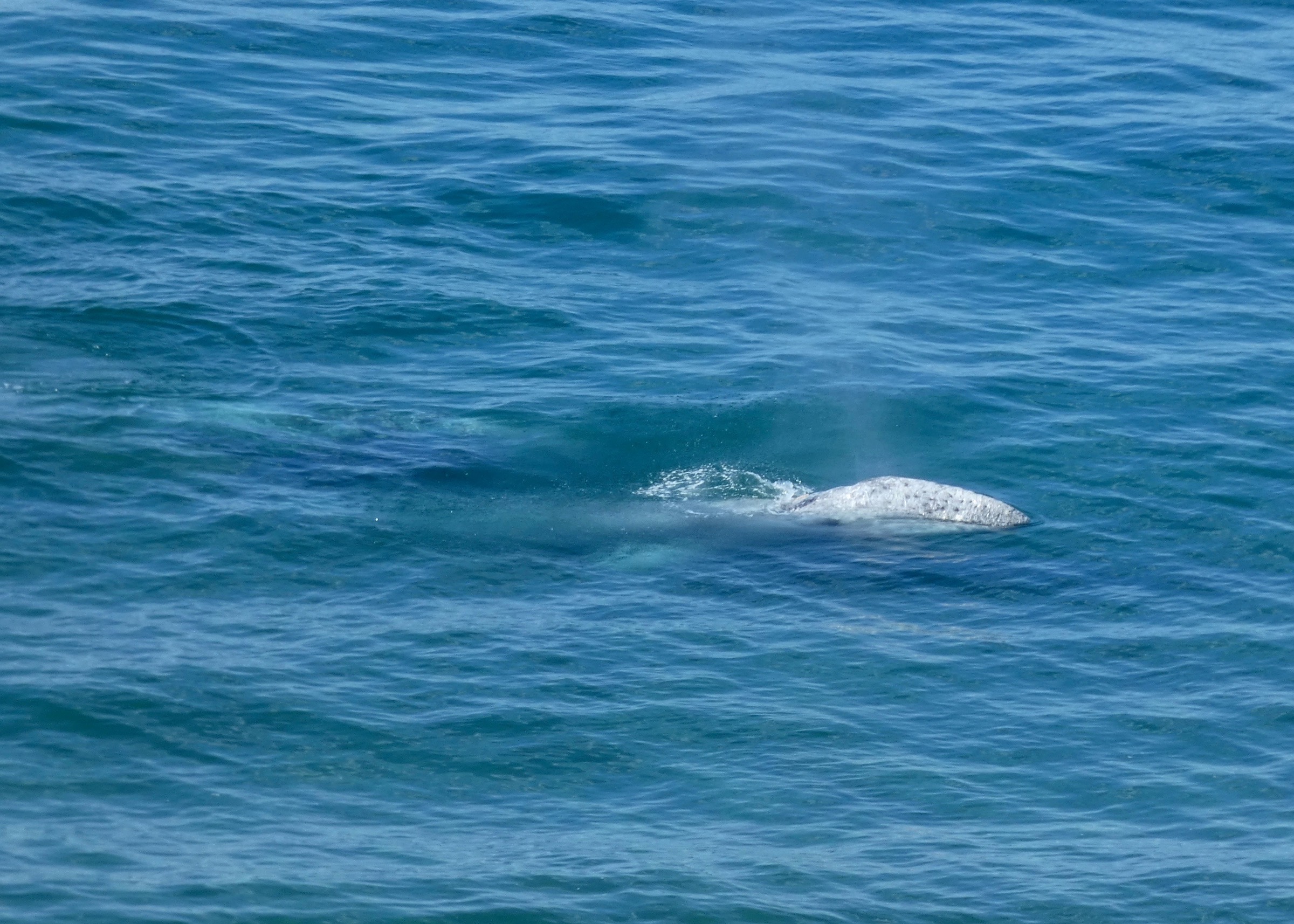 Whale baby face. A gray whale calf surfaces for a breath of air and a quick look at the world above. Calves stay close to their mothers on the journey north, and groups of whales with young calves stay close to shore to avoid great white sharks and orca. 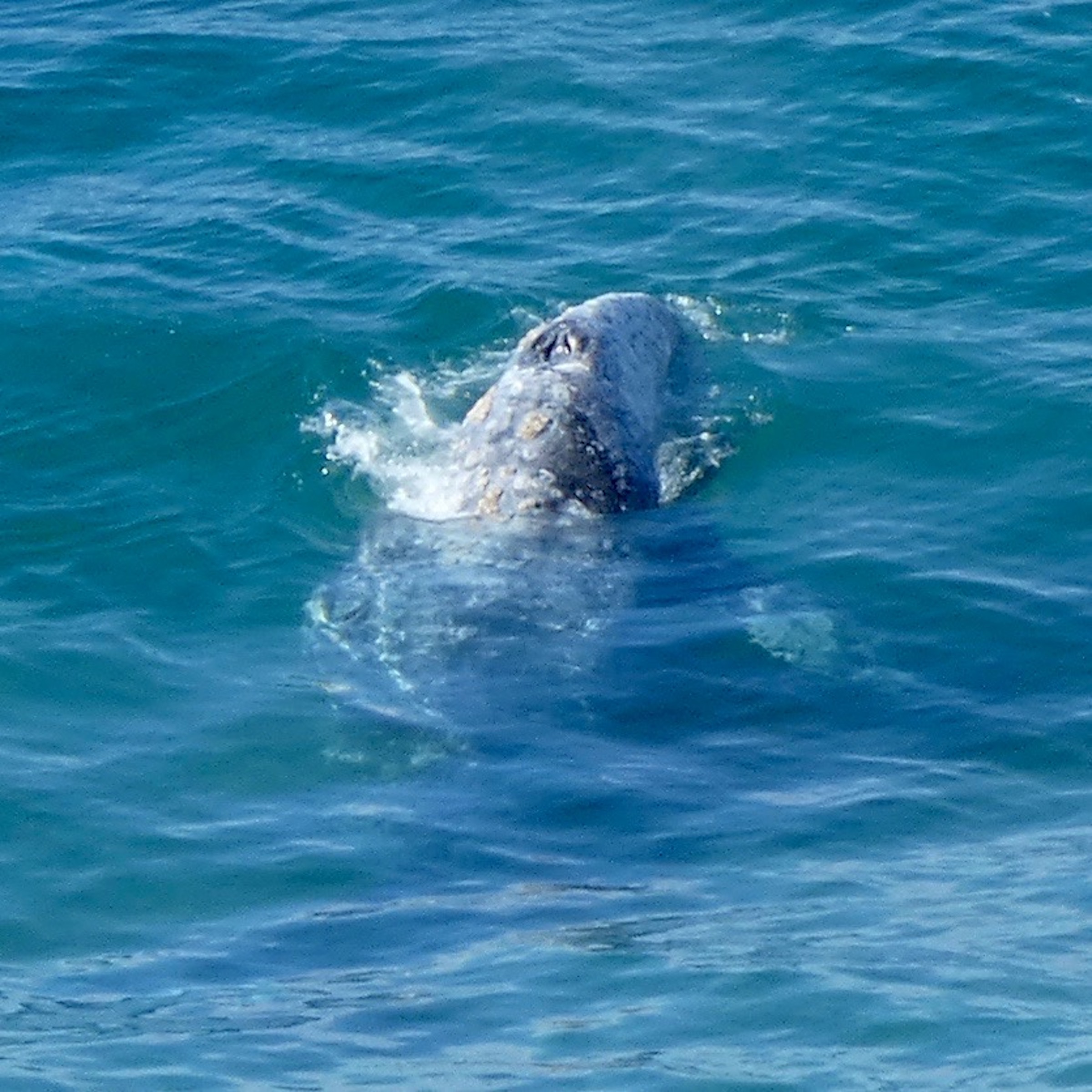 The gray whale breathes through that double blowhole, which creates a distinctive heart-shaped spout. Gray whales can be anywhere from pale gray to charcoal in color and are often covered with barnacles or light-colored scars where barnacles or other hitchhiking organisms have been dislodged. 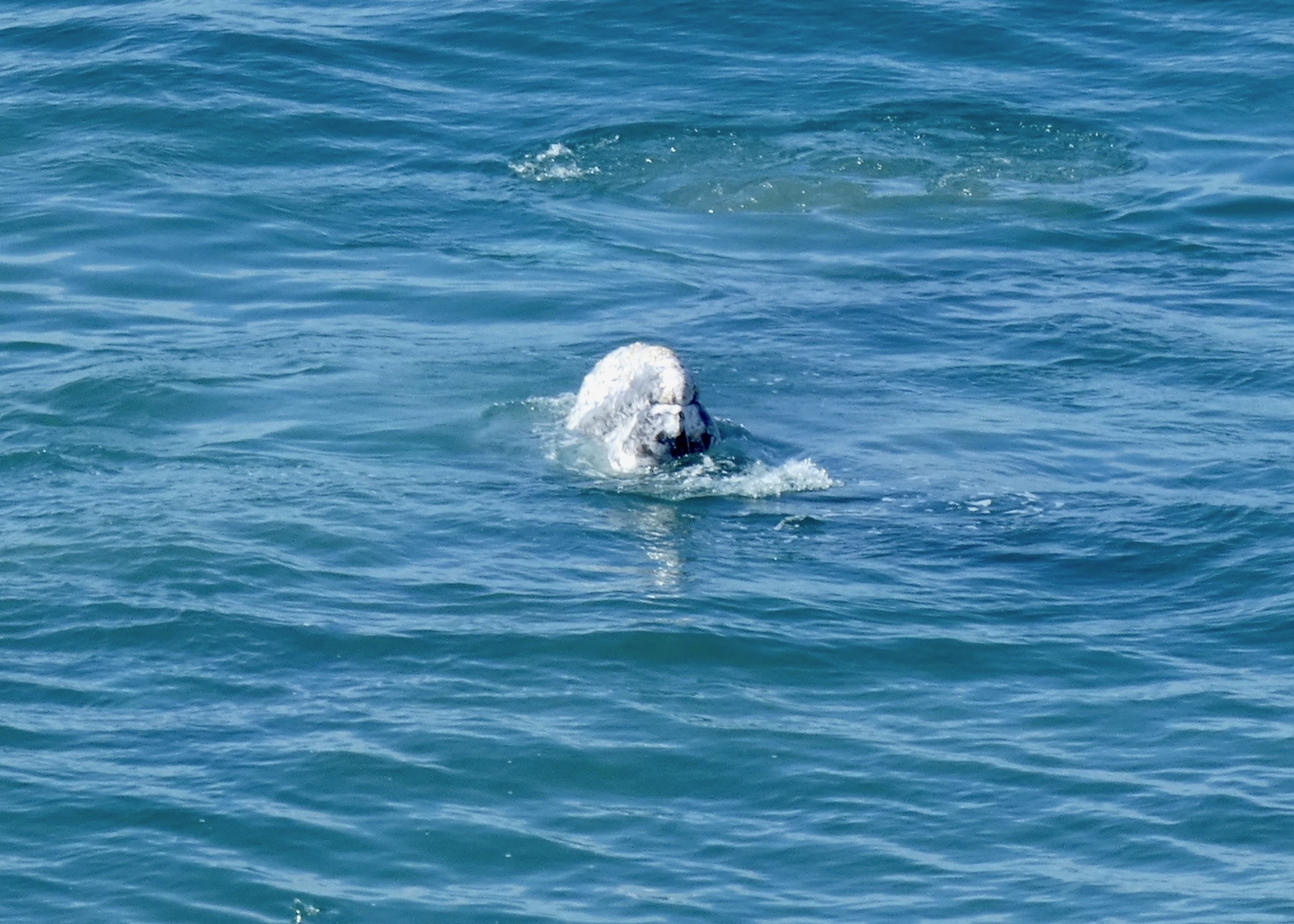 Gray whales feed on the ocean floor, straining small invertebrates out of the mud through baleen filters, but they are mammals and must come up to breathe. They also seem to like to take a look around, behavior officially known as spyhopping. 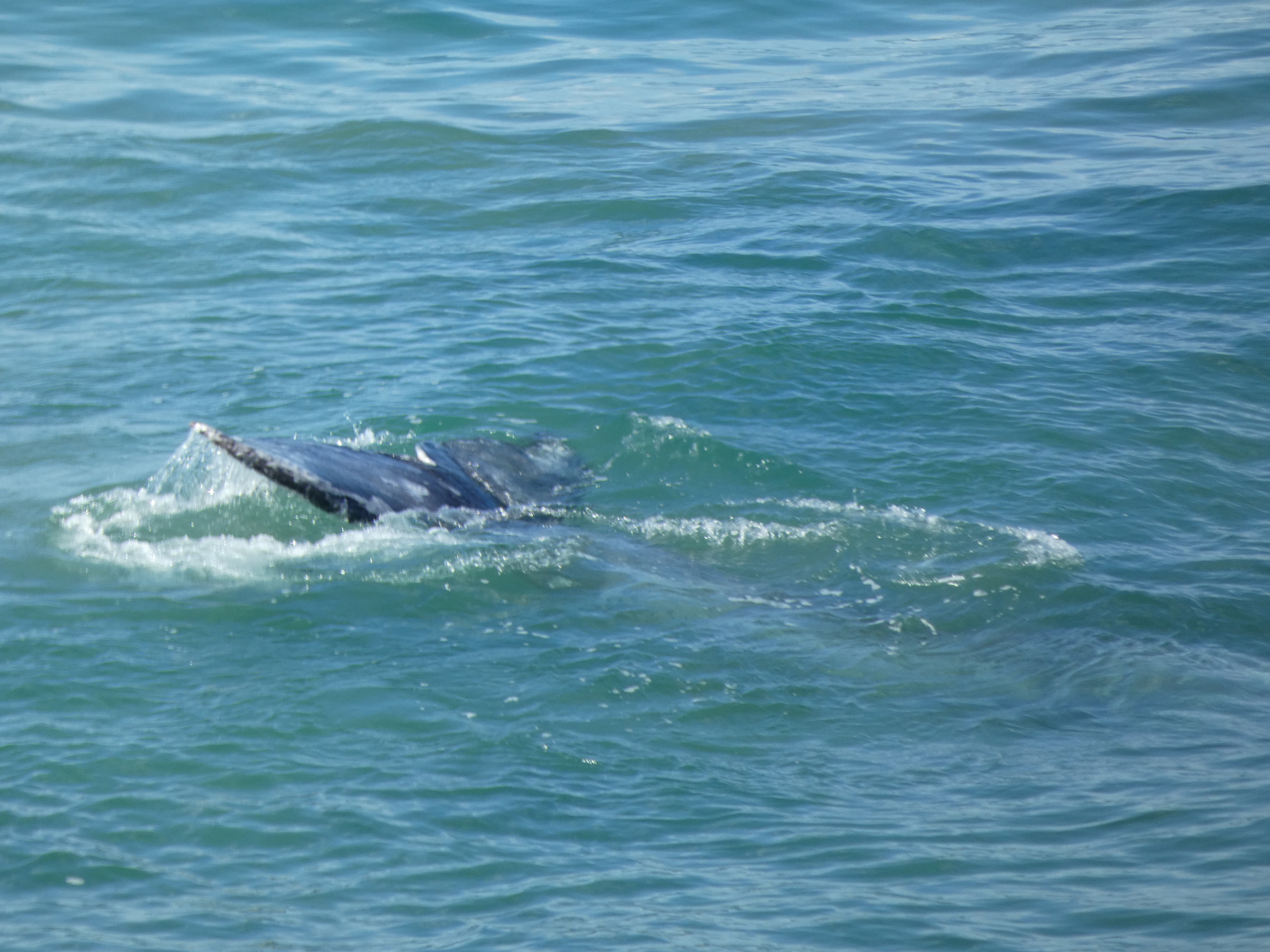 The gray whale’s “footprint” is really a tail print, made when the tail, or flukes displace water as the whale dives. 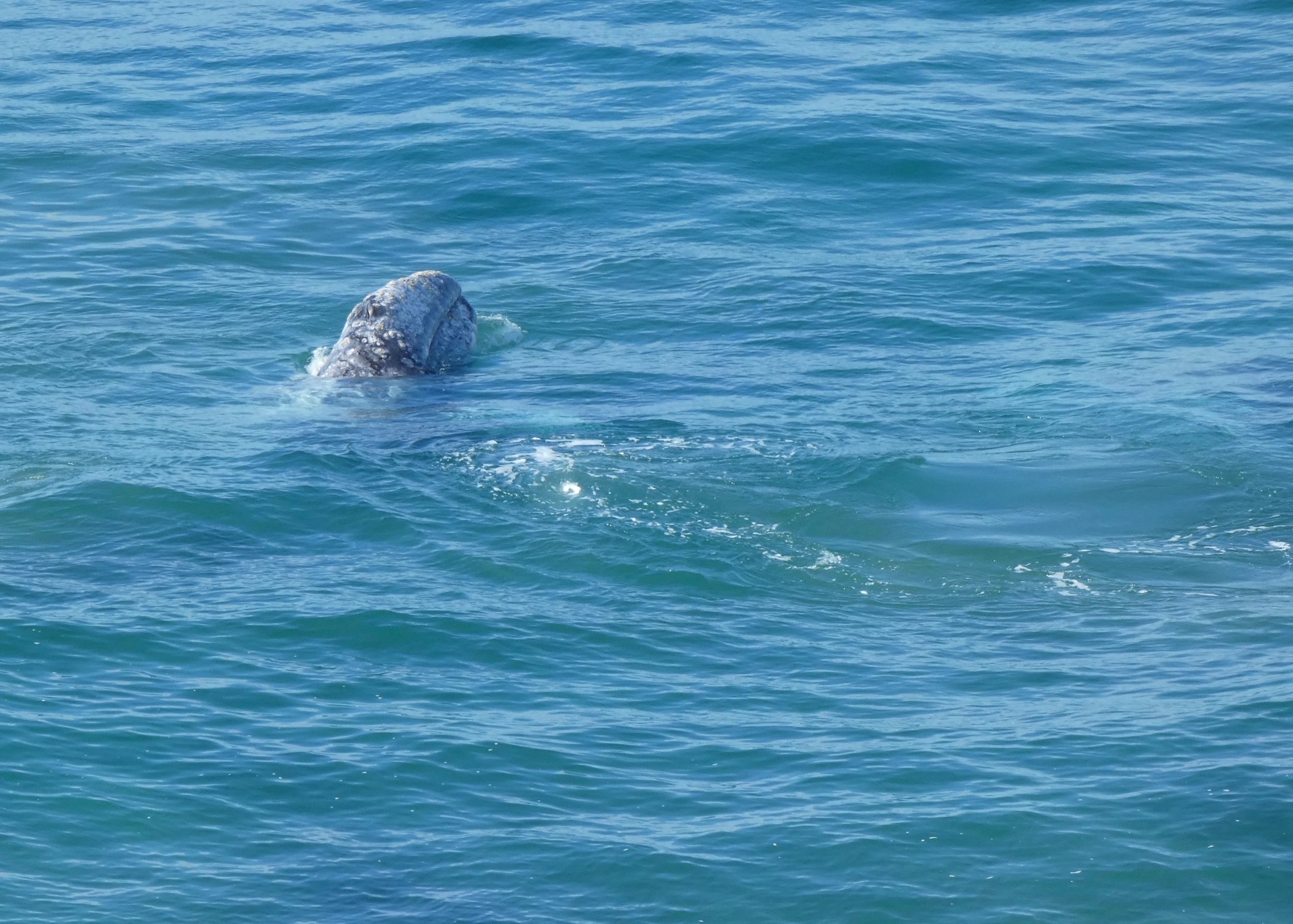 The barnacle-covered head of a gray whale emerges briefly from the water. Although gray whales can grow to be 45 feet long this is as much as any whale watcher can usually hope to see—just a quick glimpse of a passing giant. 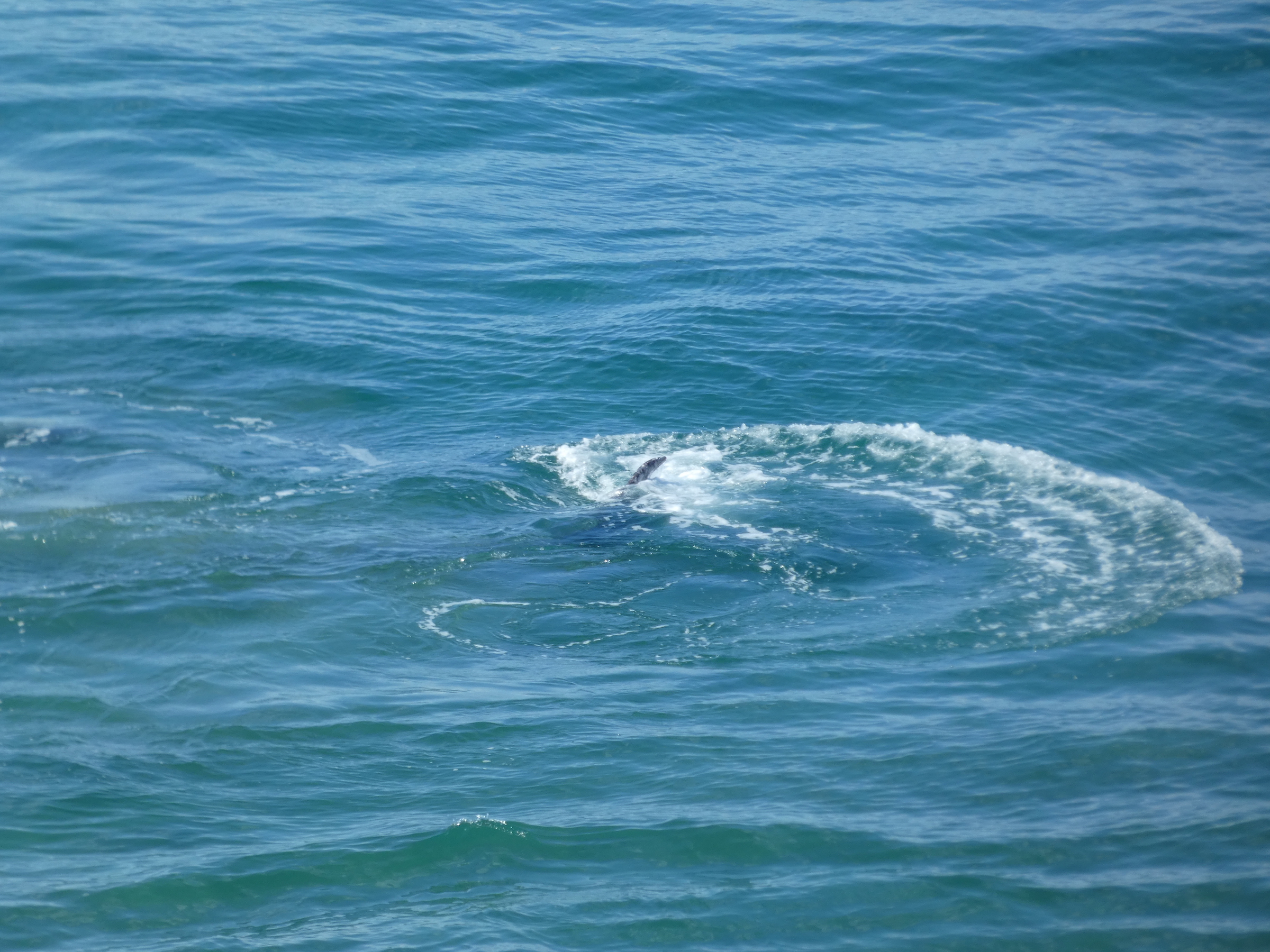 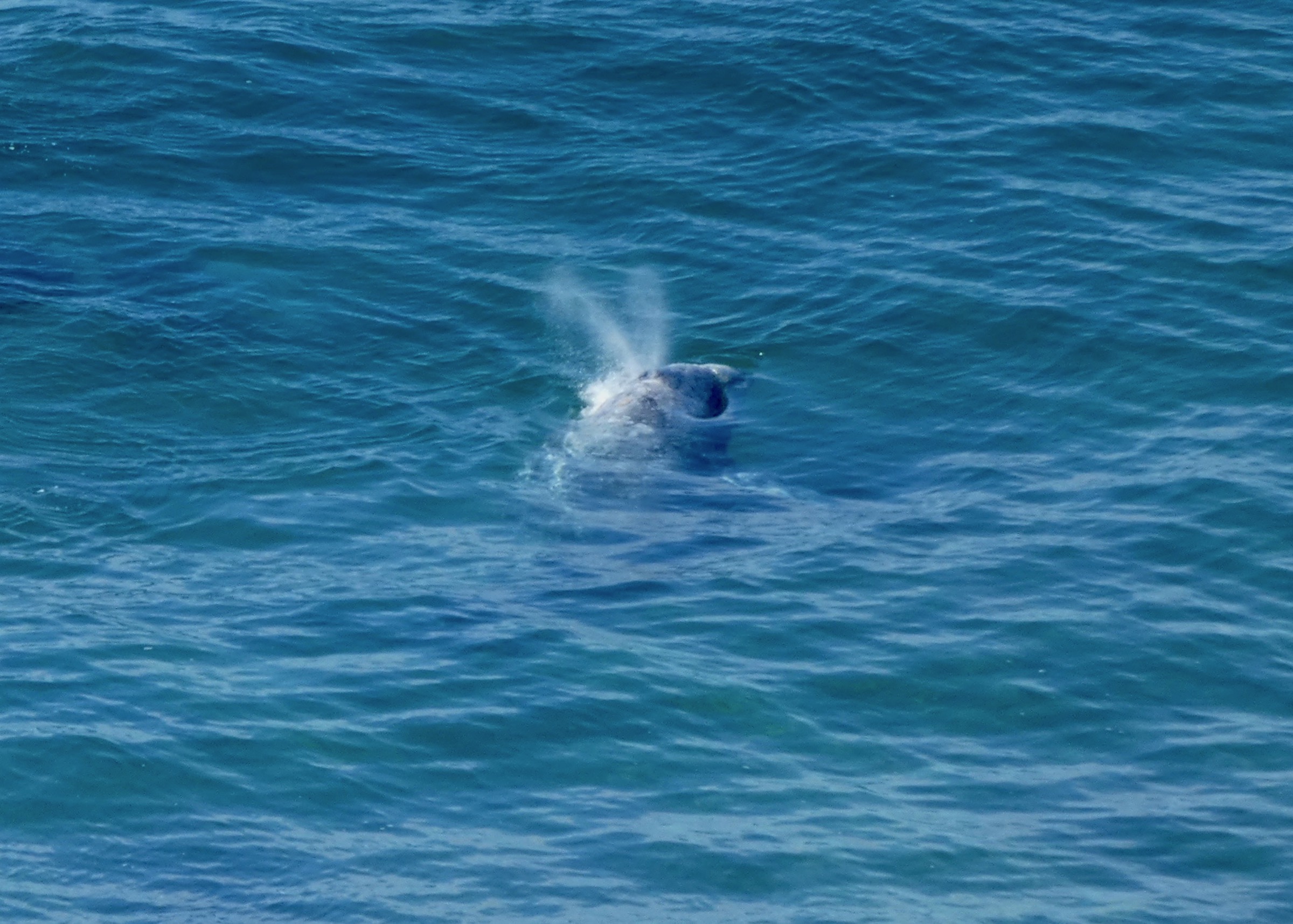 The heart-shaped spout is characteristic of the gray whale, although more often than not, it looks more like a steaming tea kettle than a heart. 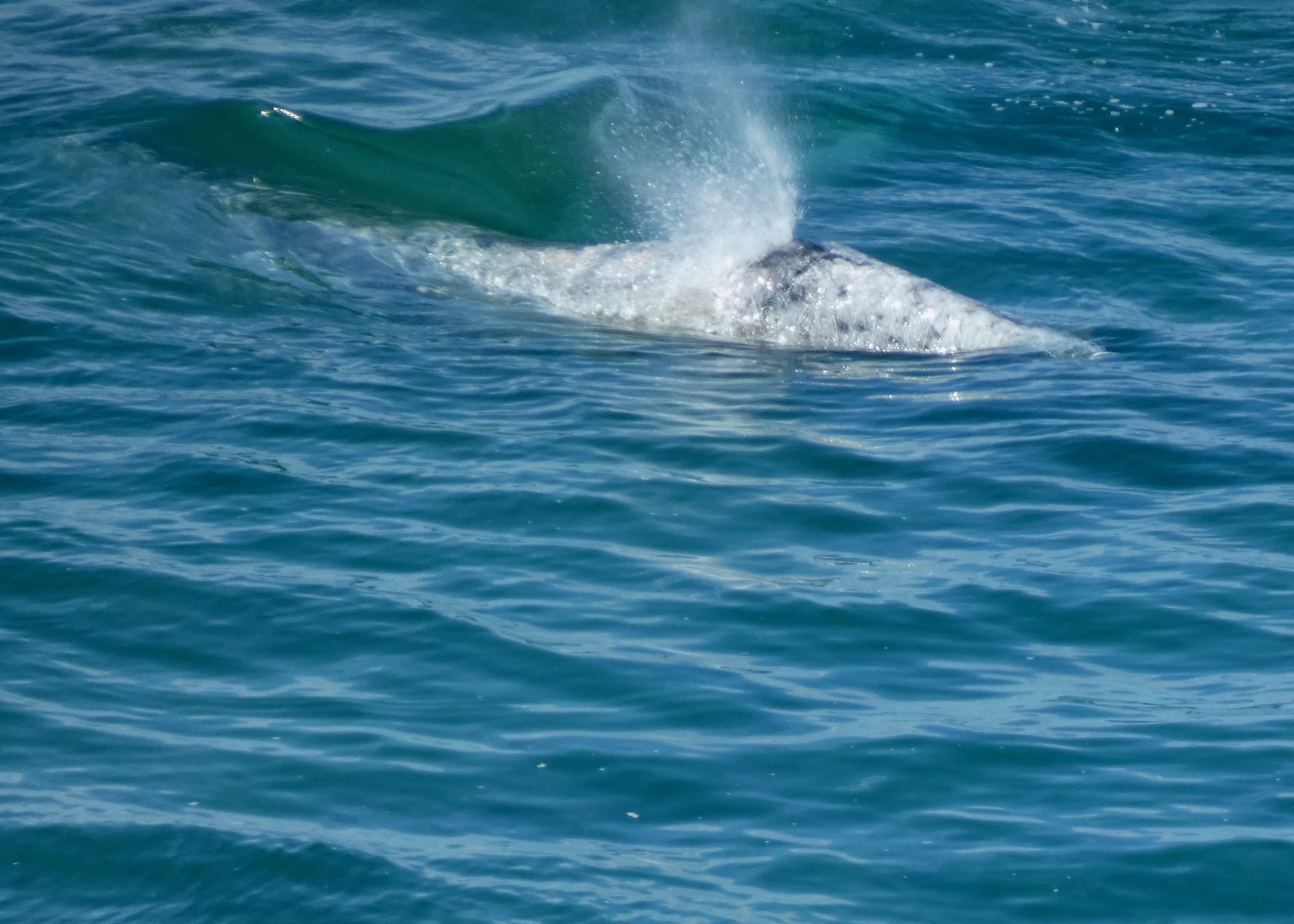 This whale was right in the surf break, so close that watchers on the beach could hear it breathing. Often all one sees is a distant spout on the horizon. 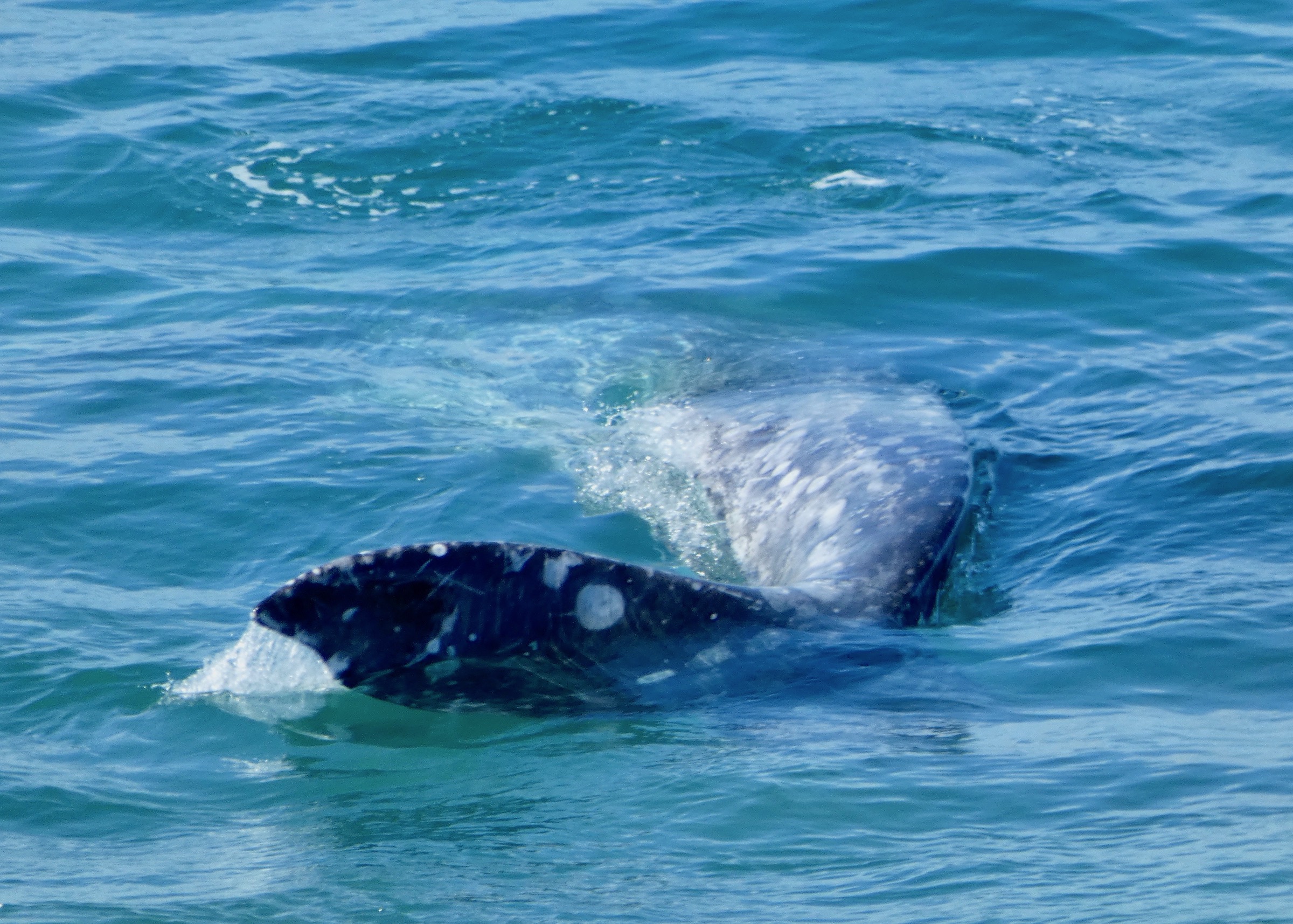 Head to the beach for a chance to spot these elusive giants.

Every winter, California gray whales take part in an epic migration from the Arctic to the warm waters of the Sea of Cortez in Baja, and back again. The first southbound whales are usually spotted passing the local coast in December; the first northbound whales usually begin to appear in February.

On the way south the whales are traveling fast and rarely linger; on the journey north, females with calves stay close to shore. They often travel in small groups made up of adults, calves and young whales, and are often joined by dolphins.

March is usually the peak time to look for northbound gray whales off the coast of Malibu, but numbers of northbound whales have already been spotted, and the migration usually runs through the end of April.

Even though these animals are giants it can still be hard to see them. How do you see whales? The first rule: take time out to go to the beach and look for them, and don’t give up if you don’t see any the first time, or the second, or the third.

There are plenty of good options for whale-watching cruises out of Ventura, Marina Del Rey and San Pedro, but I like to watch for whales from the shore. Corral, Zuma, Leo Carrillo and the small pocket beaches along PCH between Malibu and Point Mugu beaches are all good spots for whale watching, but the best spot is usually Westward, where the whales come close to shore to feed and rest.

The first thing to look for is any kind of disturbance on the water: a gathering a birds, ripples on the surface of the water, all of these can be signs that whales and other marine mammals like dolphins and sea lions are present.

Most gray whale sightings are of a distant spout or puff of breath far out to sea or a Loch Ness Monster-like hump. Often all one sees is the puff of breath with no whale in sight. These giant mammals can hold their breath for a long time and it is easy to lose track of them before they surface to breathe again. Even the briefest glimpse of these benign and beautiful giants is an amazing experience, a memory to be treasured.

California Gray whales were nearly hunted to extinction by the first decade of the 20th century, when protections were passed in an effort to save the species. The population rebounded, but still faces major challenges. 2019 was a catastrophic year for gray whales, with numerous fatalities along the migration route. Fewer large winter storms this year may help the whales, but this species is currently facing issues caused by climate change, ocean temperature and changes in the availability of the tiny shrimp-like invertebrates that are their main food source. They are also increasingly victims of ocean noise pollution from big ships, ship strikes, and becoming entangled in discarded or “ghost” fishing gear.

The American Cetacean Society’s Los Angeles Chapter runs a gray whale census from December 1 through late May each year. During the migration, trained volunteers keep watch from Point Vicente on the Palos Verdes Peninsula.

This unique study was started in 1979, and has provided decades of detailed data on the number of whales and other marine mammals sighted. So far this season, the land-based observers have spotted 436 southbound whales, and 442 northbound. It’s still early—the northbound migration usually peaks in late March.

Project coordinator Alicia Sculman-Janiger states on the census website that the whales observed represent only a portion of the total number of migrating whales and that the study is not intended to be a measure of population, but it does provide important data on the whales’ nearshore migratory route and how it changes.

Binoculars are helpful for whale watching, so is a telephoto lens—although marine mammals are notoriously difficult to photograph, and gray whales, for all that they can grow to be more than 45 feet in length and weigh up to 40 tons, can be amazingly elusive. Drone operators increasingly stalk whales from the air. This is illegal at many beaches and may put whales and other marine mammals at risk. NOAA’s guidelines encourage whale watchers, including drone, to observe from a safe distance of at least 100 yards.

It’s worth paying to park in the Westward Beach lot at this time of year. Bring a chair and an umbrella and picnic and make a day of it; or walk up to the top of the Point Dume Nature Preserve and watch for whales from one of the viewing platforms—there are two new platforms this year, although some trails in the nature preserve have been closed for trail work and the new beach staircase that is going in later this spring.

There are no guarantees in whale watching, whether on a boat or on the beach. You may see a dozen or none at all, but an hour or two spent watching for whales is never time wasted. In its own way, it is a form of meditation.

Many local whale watchers spend every spare moment on the beach scanning the horizon, hoping to catch sight of a telltale spout or the splash of a tail fluke. When the migration is over in late spring the ocean feels empty.

A Celebration of Art

A 2020 Primer on the US Constitution: Musings on Article I