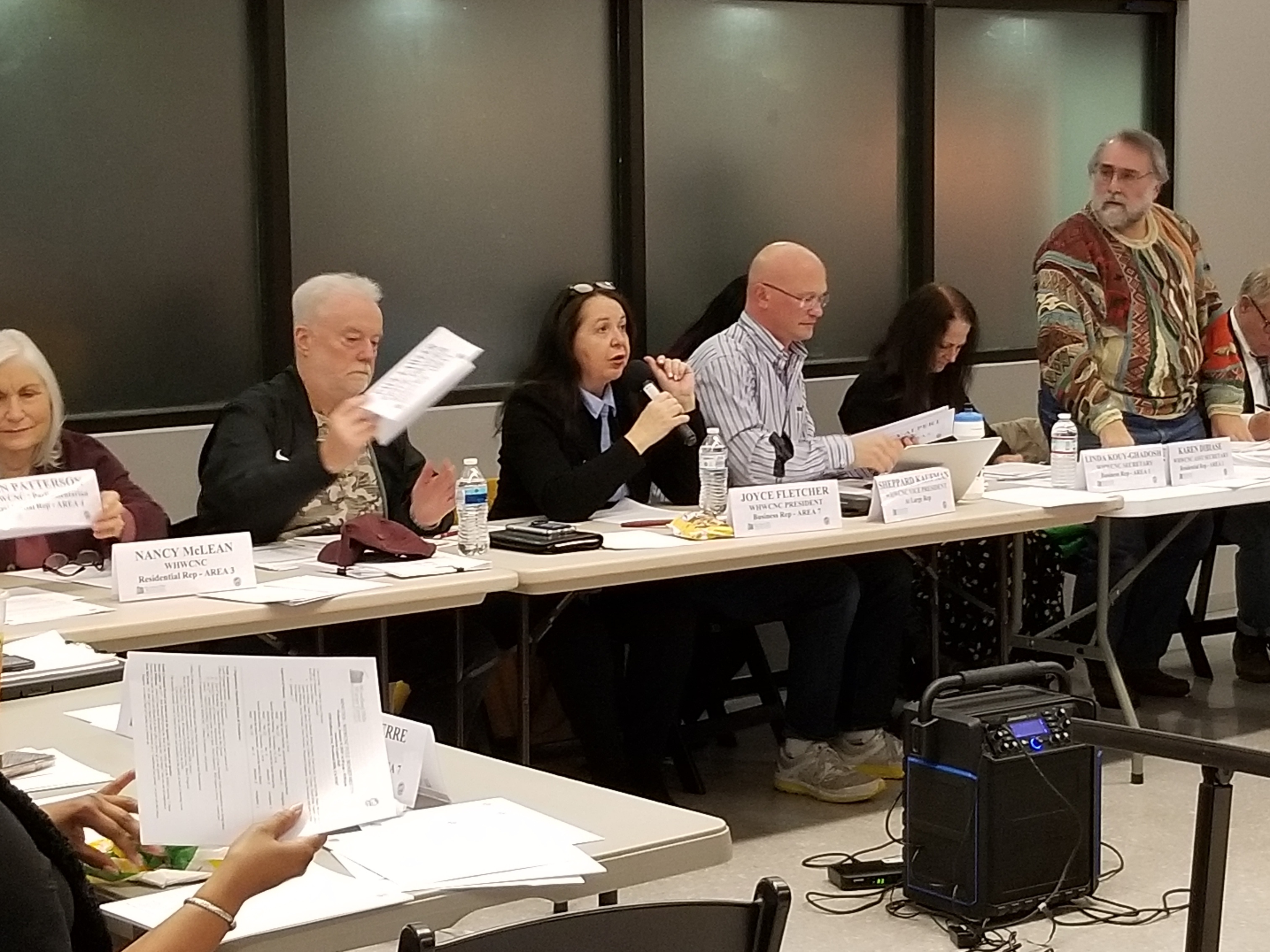 Joyce Fletcher, president of the Woodland Hills-Warner Center Neighborhood Council, begs the audience to be respectful during the board meeting. Photos by Annemarie Donkin 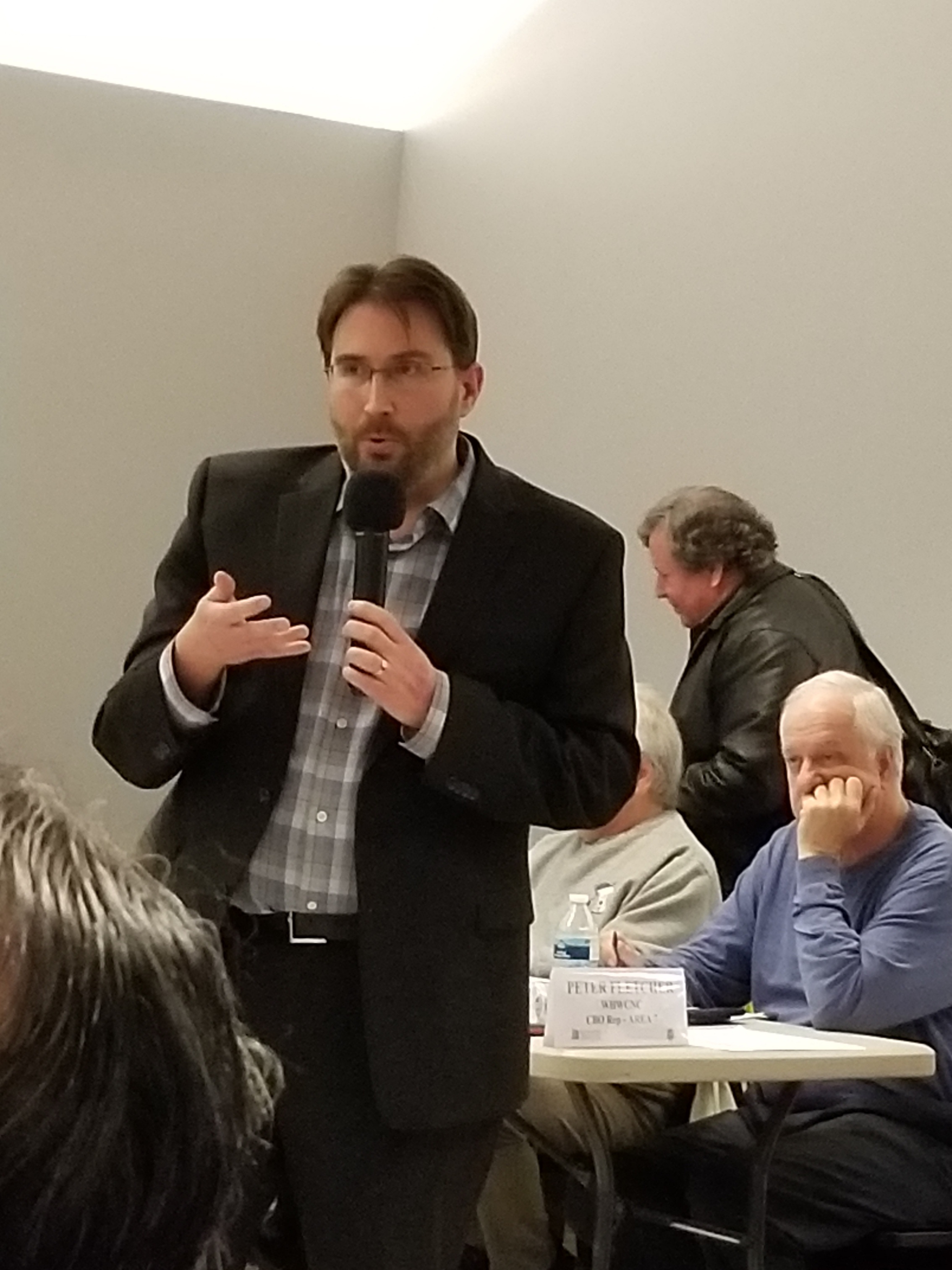 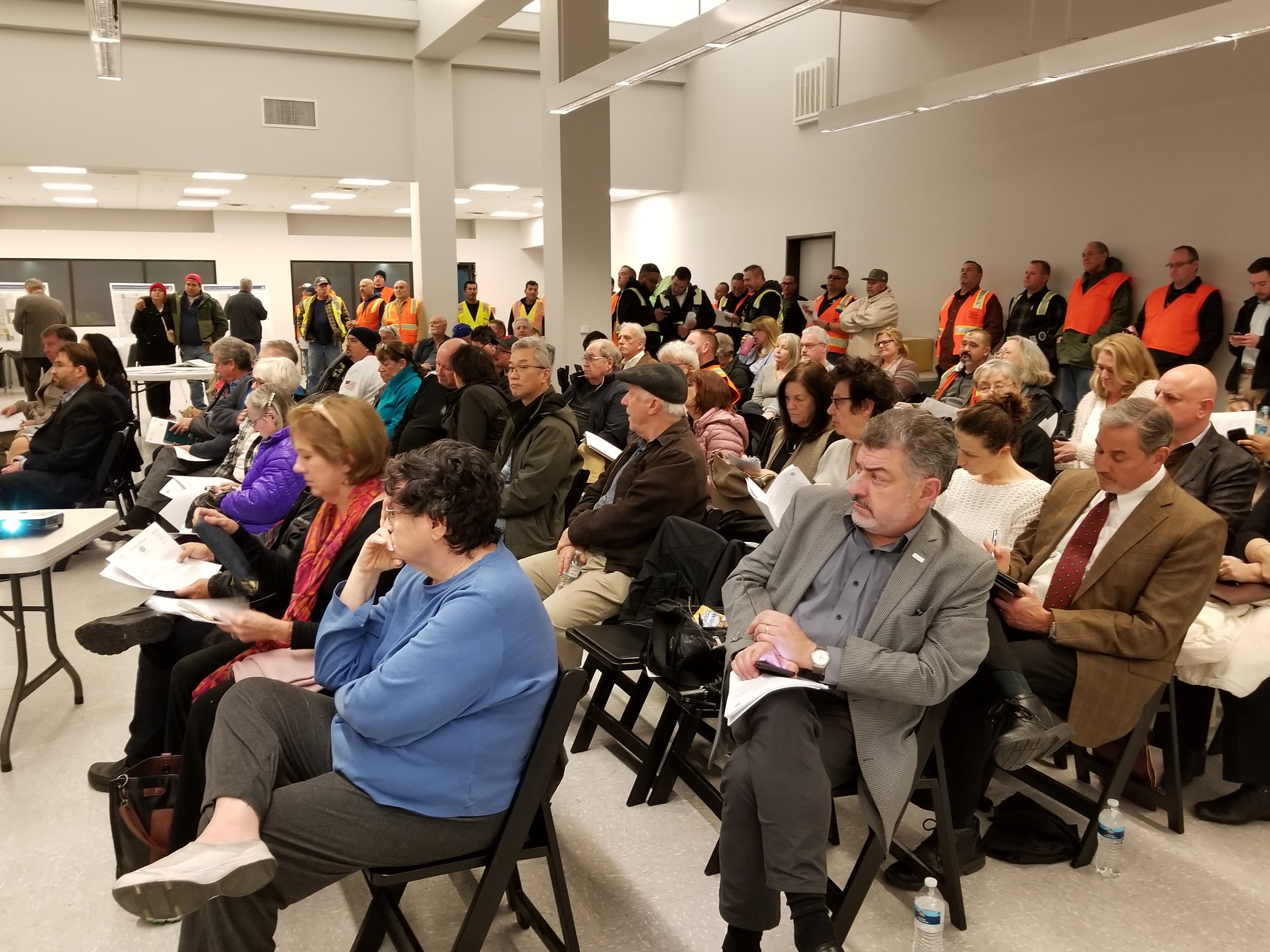 A crowd of about 100 people and about 40 members of the Southwest Carpenters Union attended the meeting.

About 100 residents and union members attending a Woodland Hills–Warner Center Neighborhood Council (WHWCNC) meeting on Feb. 13 became unruly during a heated Q&A session about why City Planning, the Planning Commission, or the Los Angeles City Council are not willing to listen to or meet the needs of the community regarding objections to the Warner Center 2035 Specific Plan.

Since the plan was adopted in December 2013, the City Planning Department is now required to submit a status report to City Hall within 90 days of the Plan’s five-year anniversary that began in December 2018.

During the presentation to community members at the Rose Goldwater Community Center on Vanowen St. in Canoga Park, and the following Q&A, Los Angeles City planning officials Tim Fargo, and Blake Lamb requested patience from the rowdy audience, saying that they were only there to deliver the mandatory five-year status report and collect written public comments.

“What is intended is a mixed-use, transit-oriented community that is walkable and combined work, living, and recreation in a denser area,” Fargo said.

That wasn’t good enough for the audience members who crowded into the Community Center on a rainy night to object to the plan.

The main topics of concern expressed by many homeowners regarding the proposed high-density development are parking, road conditions, traffic, freeway congestion, insufficient traffic signals, increased crime and homelessness, lack of affordable-housing, and the disruption to the quality of life in a quiet community.

During the Q&A, many audience members mentioned that there are currently no provisions within the Plan to increase police or fire protection or build any schools.

Additionally, about 75 members of the local Southwest Carpenters Union challenged the planning officials to revise and amend the plan to enforce a provision requiring developers to hire union workers.

One of the carpenters, Sean Mann, said they want the developers to be required to hire only qualified, certified union members instead of “day workers, non-union, uncertified, and unskilled labor,” on the proposed projects.

According to Lamb, it is optional that a developer would enter into a “Developer’s Agreement” with the City of Los Angeles that specifies hiring union workers.

That was the main objection from the Carpenters Union as one of their members shouted, “Why put something into the plan that is not enforceable,” to enthusiastic applause and loud hoots.

Fargo added that “there are currently no proposed revisions…we will be creating an entirely new community within Woodland Hills.”

During the Q&A session, Kathryn Arndt, a longtime Woodland Hills resident, noted that the number of parking spaces for approved residential projects seemed inadequate. On a display board in the meeting room, the LA Department of City Planning stated that 3,289 parking spaces had been approved. The planning department has approved 2,509 residential units so far, while another 6,089 residential units are pending approval, according to information on another display board in the room.*

Fargo answered that the parking allocation was based on the “Old Plan” and it would be mixing up what was approved in 2013 and what has currently been submitted. That created more consternation among the crowd.

A concerned resident, Christine L. Rowe, a public health journalist, asked about the extensive amount of groundwater and soil contamination within the 47-acre Rocketdyne site on Vanowen St. and Canoga.

Lamb answered that contamination sites were addressed in the original 2013 Environmental Impact Report and submitted to the City Council.

Another Woodland Hills resident asked about phase building, where developers build the residential portion of a project, then build the commercial portion; something that is not currently happening.

“The developers have outwitted us and outplayed us, just like on “Survivor,” he said. “How do we know the commercial phase will be built; right now, only apartments are being built, there is no commercial.”

Again, Lamb took the question and answered that “developers may choose to phase buildings in the order they choose,” although she conceded that “the phasing issue warrants discussion with the City Council.”

Finally fed up with the shouting and talking back from the audience, Joyce Fletcher, president of the WHWCNC, said she would not be harassed at her own board meeting.

Fletcher said the board just wanted to learn the status of the plan and said she felt that City Planning was only concerned with how many units were under construction, planned, or still up for approval based on the 2013 plan.

“Hitting your numbers does not mean you are building a living community,” she said. “Cities are places that evolve instead of this planned downtown; I guess you are afraid of amendments so you don’t open up a can of worms.”

*This paragraph was amended on March 2, 2019 to show more exact figures.