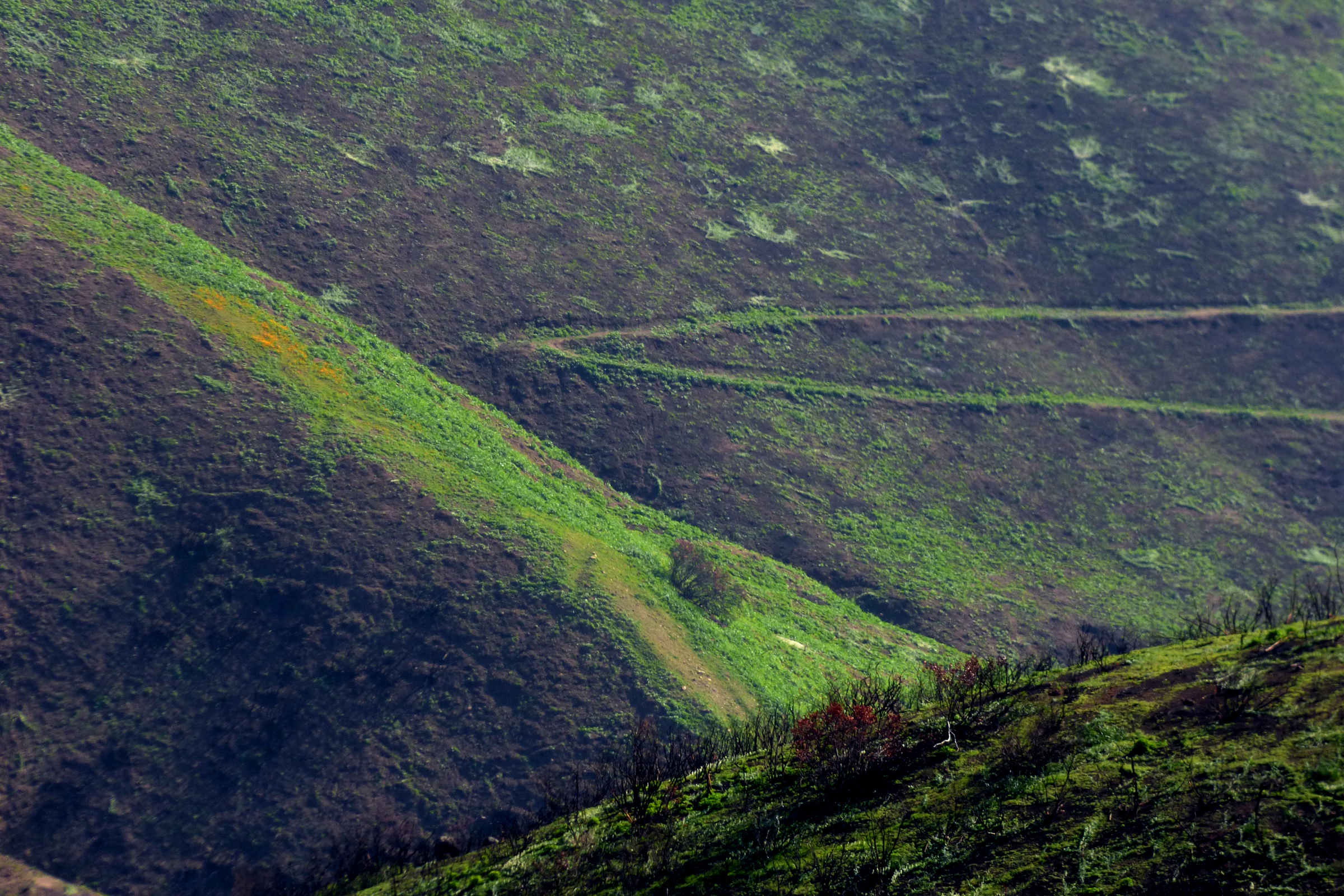 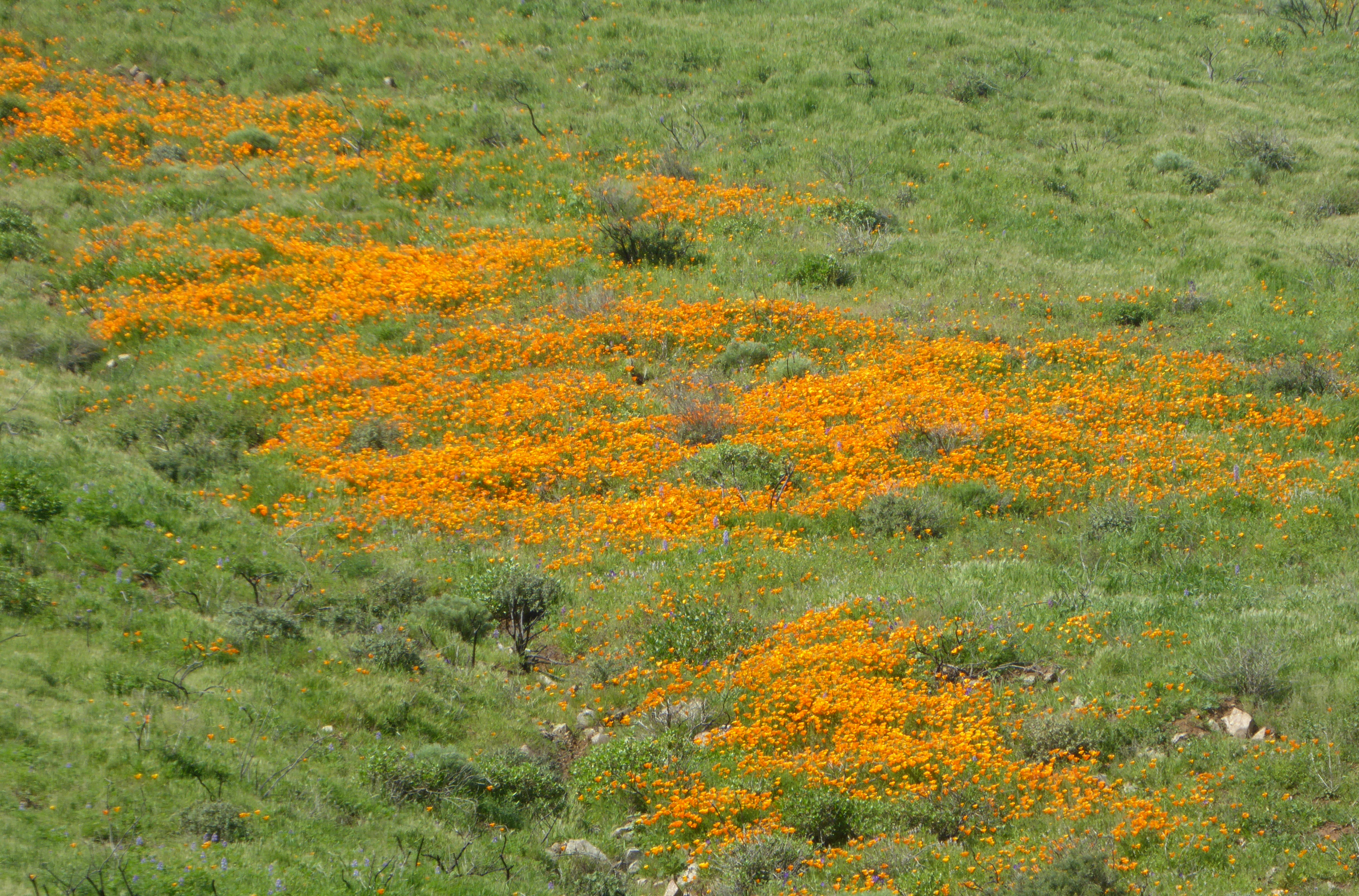 Poppies and lupins often bloom together in vast numbers following a fire. Their seeds can remain viable in the soil for years, waiting until conditions are right for germination. 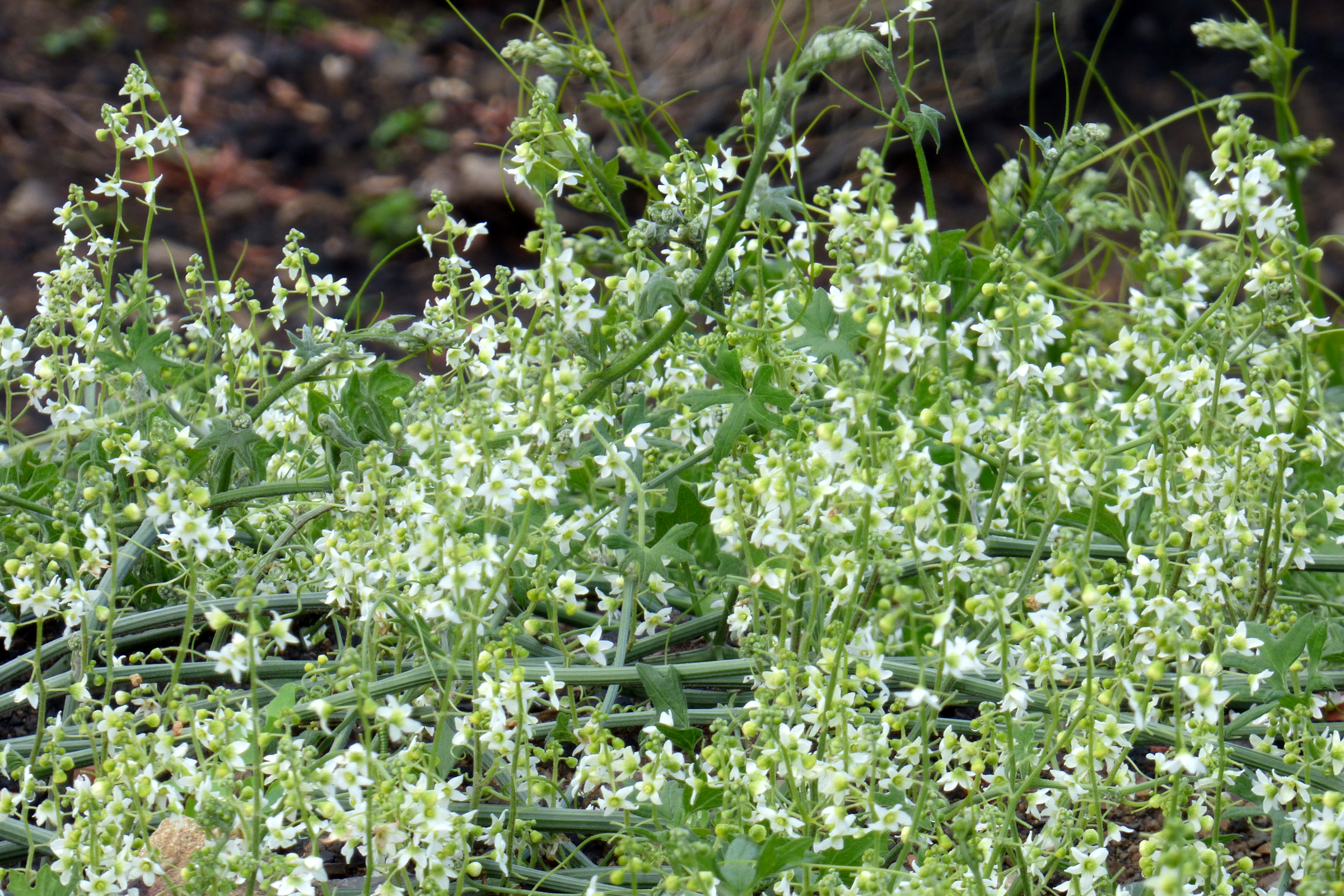 Wild cucumber (Marah macrocarpa) is also known as “manroot, for its enormous root system that stores water and nutrients deep underground. This root, which can weigh as much as 100 pounds, enables the plant to get a head start after a fire. Wild cucumber is currently the dominant native plant in the fire area. Its sweet-scented flowers already giving way to prickly seed cases, but it also thrives in the unburned areas of the mountains, including Topanga, where it wreaths itself on fences and mailboxes, and covers steep hillsides in a tide of tiny white flowers. 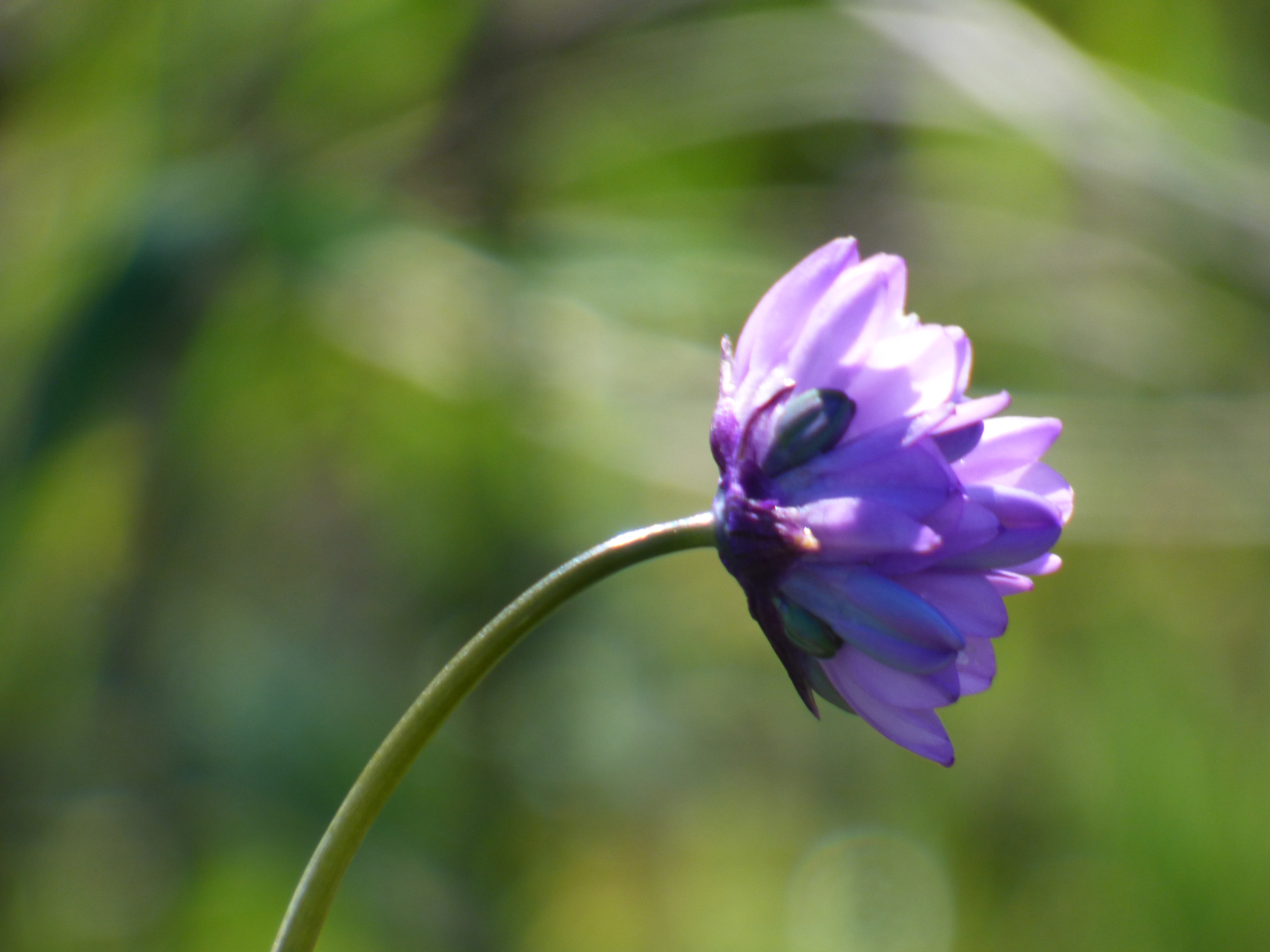 Blue dicks (Dichelostemms capitatum) grow from a corm deep underground, enabling it to survive and thrive during wild. It’s just starting to bloom in profusion in the Woolsey Fire burn area, but I also thrives in Topanga. Look for this delicate, long-stemmed wildflower in Topanga State Park. 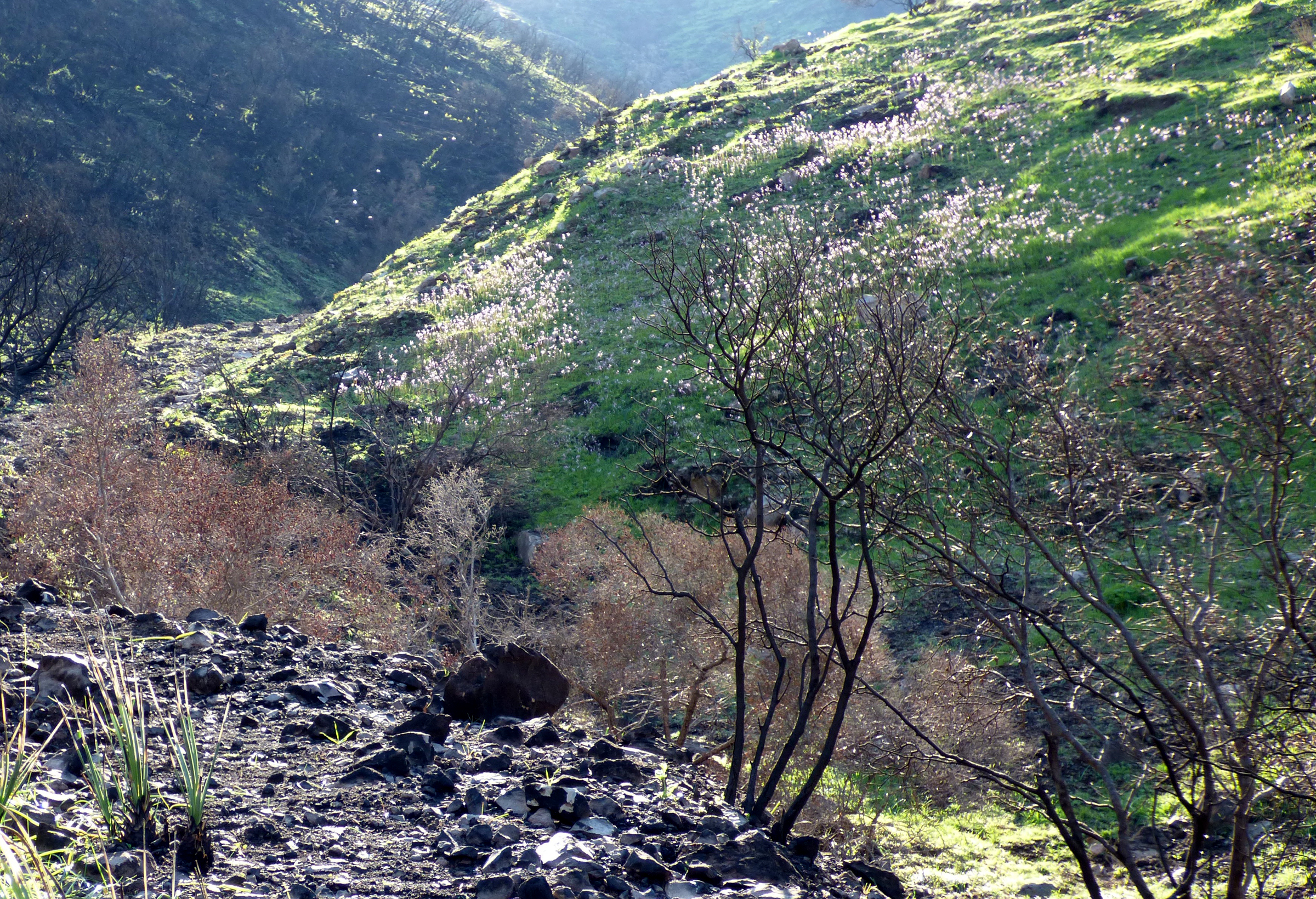 A proliferation of Padres shooting star (Primula clevelandii) catches the light on a hillside in the Woolsey Fire burn area. This short-lived flower is usually one of the first to bloom in late winter. When conditions are right, as they are this winter, it can cover entire hillsides. In a dry year, all one may encounter is a solitary plant. 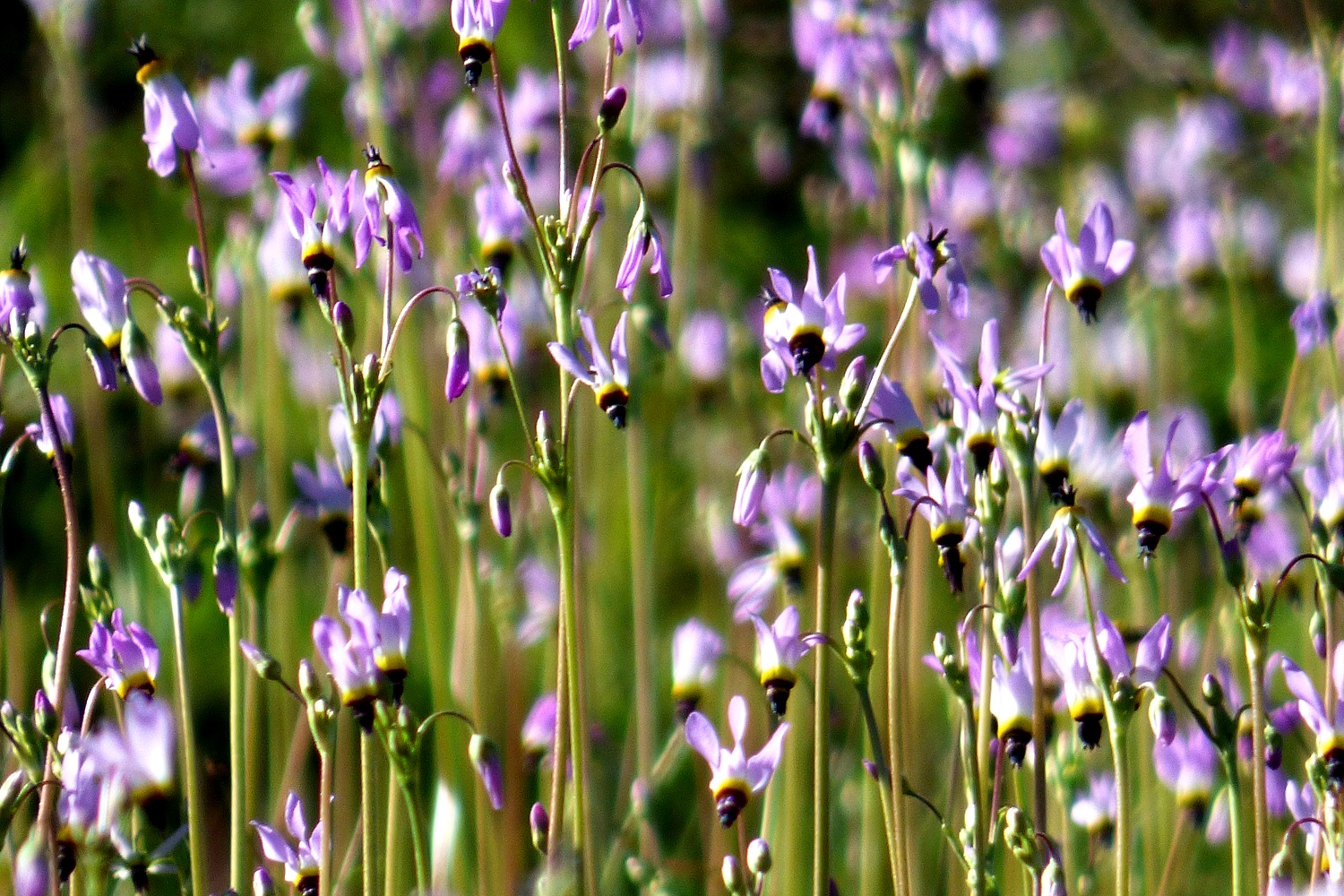 Ground pink (Linanthus dianthiflorus) is a member of the phlox family, and like its big cousin prickly phlox has a sweet fragrance. Ground pink is tiny, seldom growing higher than a couple of inches, but when conditions are right it blooms in the thousands, carpeting hillsides in a tide of pink.

Wildflowers are on the way and abundant rain promises ideal conditions for a spectacular spring in the Santa Monica Mountains and throughout Southern California this year. The rain and cold weather have slowed flower growth, but when the big bloom arrives, it is expected to be colorful and amazing throughout the area.

The biggest transformation wrought by the rain is in the Woolsey Fire burn scar, where new growth is covering blackened hillsides with vibrant green, and the promise of rarely seen fire followers, herbaceous flowering plants that are only abundant after a wildfire.

Mendelsohn is part of a team of biologists monitoring the new growth. They’ve even created a hashtag so the public can keep up with developments: #WildflowerWatch2019.

Mendelsohn and his colleagues will be looking for more than a hundred species of fire followers. In some areas the first flowers are already appearing, despite the cold spell.

In December, the Messenger Mountain News accompanied Mendelsohn into upper Trancas Canyon, an area so hard hit by the fire that it resembled the surface of Mars. More than 14 inches of rain later, the blackened oak trees in that canyon are beginning to re-sprout, and patches of the canyonside are carpeted in ethereal pink shooting star flowers (Primula clevelandii), and dense mats of tiny, sweet-scented wild cucumber flowers (Marah macrocarpus).

Flowers to look for in the burn area as spring progresses include fields of California poppies and lupines, along with other annual wildflowers like clarkia, larkspur, gold fields, ground pinks, and owl clover.

Rarer flowers—like mariposa lilies, and true fire followers, like California Canterbury bells and fire poppies—flowers with seeds that can lie dormant in the soil for decades waiting for the first rains following a wildfire to germinate—are also expected to appear.

The true fire followers take advantage of the absence of large shrubs and trees following a fire. Species like bush poppy (Dendromecon rigida) and wooly blue curls (Trichostema lanatum) spring up after the annual flowers have bloomed following a fire and before the chaparral shrubs and trees recover. They grow and bloom for only few years—until they are pushed out by the recovering shrubs—depositing seeds in the soil that will not germinate until after the next cycle of fire.

“Woodlands and shrub lands were hit hard by the fire,” NPS spokesperson Ana Cholo reports. “In some cases, all above-ground plant matter was consumed.”

NPS biologists are monitoring oaks and sycamores in the the burn scar and watching for signs of regrowth. By the end of the spring growing season they will have a better idea how many trees will recover, and how many were killed by the fire.

“We should see some kind of response from them,” said John Tiszler, a supervisory plant biologist who has worked at SMMNRA for 22 years. “Even if we see resprouting, it doesn’t necessarily mean the tree will recover. They don’t always make it in the long run. After the Springs Fire, a number of oak trees initially re-sprouted, but they ultimately didn’t make it.”

Many chaparral trees and shrubs are already showing signs of regrowth, including laurel sumac, scrub oak, and mountain mahogany. All three species can re-sprout from deep roots. Other species regrow from seed.

Many of the top wildflower areas in the SMMNRA are still closed due to fire damage, but parks are beginning to reopen. The NPS recommends  Paramount Ranch, Cheeseboro/Palo Comado Canyons and Upper Las Virgenes Canyon Open Space Preserve for post-fire wildflowers, with “the crème de la crème display of flowers,” expected at Malibu Creek State Park.

“We ask that visitors stay on trails and not tread on vegetation so that everyone can enjoy the flowers,” Chola wrote. “SMMNRA is a national park. Regulations prohibit picking of wildflowers so that they may produce seed for the next wildflower season.”

That advice is even more important than usual in the burn zone, where plant recovery is dependent on “seed banks” in the soil that can’t be replaced until the next generation of flowers set seed.

In Topanga Canyon, the rain has filled creeks and turned even the steepest canyon walls green with new growth. Few wildflowers are in bloom yet except for the snow-like ceanothus, and an abundance of wild cucumber. As the weather warms, the next round of early blooms should include roadside favorites like pink prickly phlox (Leptodactylon californicum), canyon sunflower (Venegasia carpesioides), and brodiaea, also called wild hyacinth or blue dick (Dichelostemms capitatum).

Roadsides and areas with human activity are more likely to have non-native wildflowers, like the neon yellow “Bermuda buttercups” (Oxalis pes-caprae) that escaped from gardens in the 1940s and thrive in empty lots and along the roads in Topanga.

The fields of golden mustard flowers and white and pink wild radish currently in bloom are also not native. Black mustard (Brassica nigra), ubiquitous throughout the Santa Monica Mountains, has already recolonized the Woolsey Fire burn zone, an unwelcome development for biologists monitoring the revegetation process. Although its flowers are beautiful, this tough, durable invasive species displaces native plants and can help wildfires spread.

Topanga State Park also contains prime wildflower areas. Other areas that were not affected by the fire include the spectacular annual display of giant coreopsis flowers at Point Dume Nature Preserve in Malibu, and Rancho Sierra Vista in Newbury Park, which burned in the 2013 Springs Fire, but was not affected by the Woolsey Fire.

Farther afield, things appear to be coming together for a good year of desert bloom at the Antelope Valley Poppy Preserve, areas like Devil’s Punch Bowl and Red Rock Canyon, and Joshua Tree. At Anza Borrego Desert State Park near the border with Mexico, early rains already generated a first bloom, and wildflower watchers are anticipating a one-two punch, with a second wave of flowers expected in spring.

Look for regular updates on the local wildflower scene throughout the spring in the Messenger Mountain News.

Desert USA also includes the Santa Monica Mountains, as well as reports from all parts of Southern California.

Don’t forget to check out the NPS wildflower hashtag on social media: #wildflowerwatch2019.