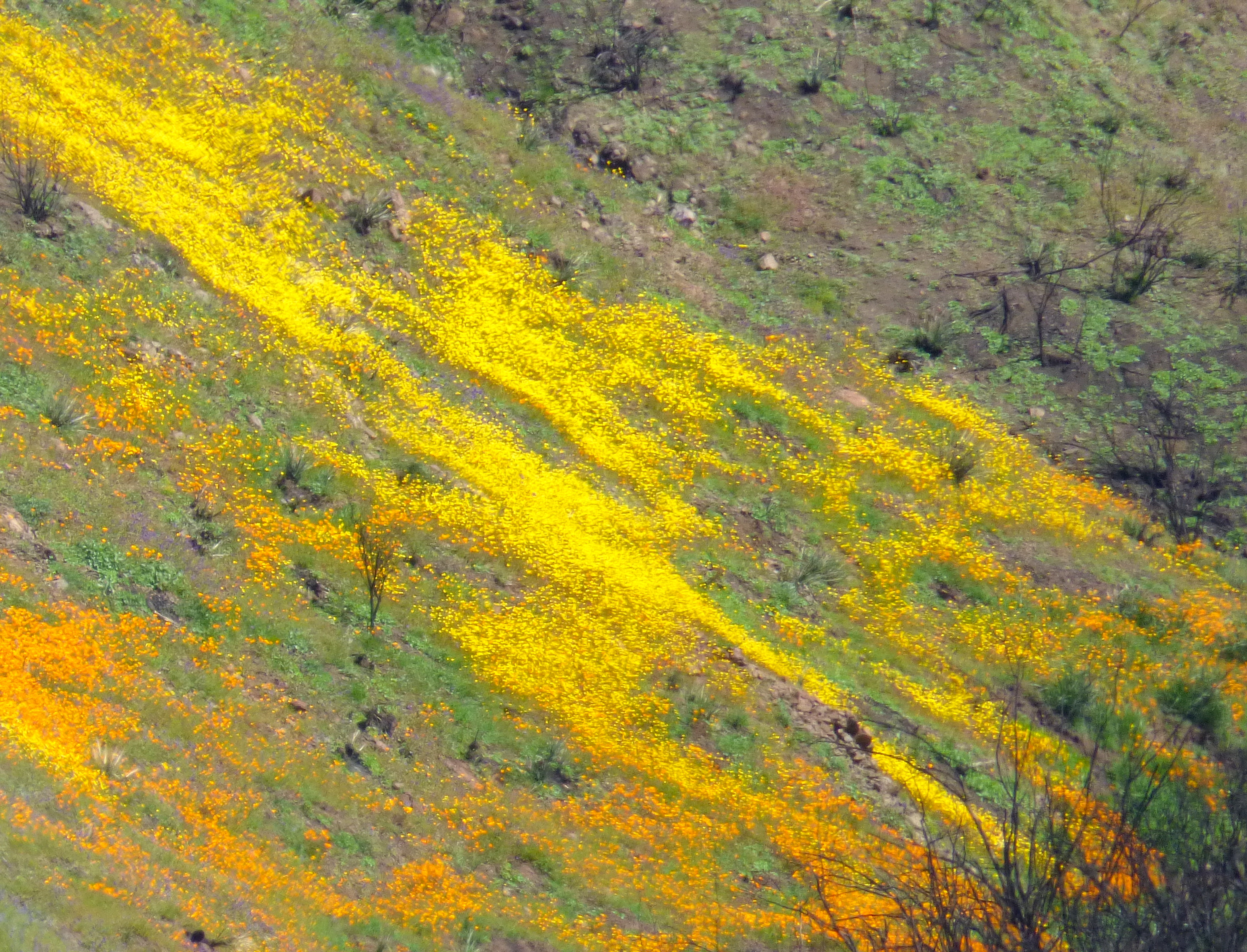 This patchwork of poppies and coreopsis isn’t a scene from a desert wildflower preserve, it’s right in the Santa Monica Mountains, visible from Kanan Dume Road. Photos by Suzanne Guldimann 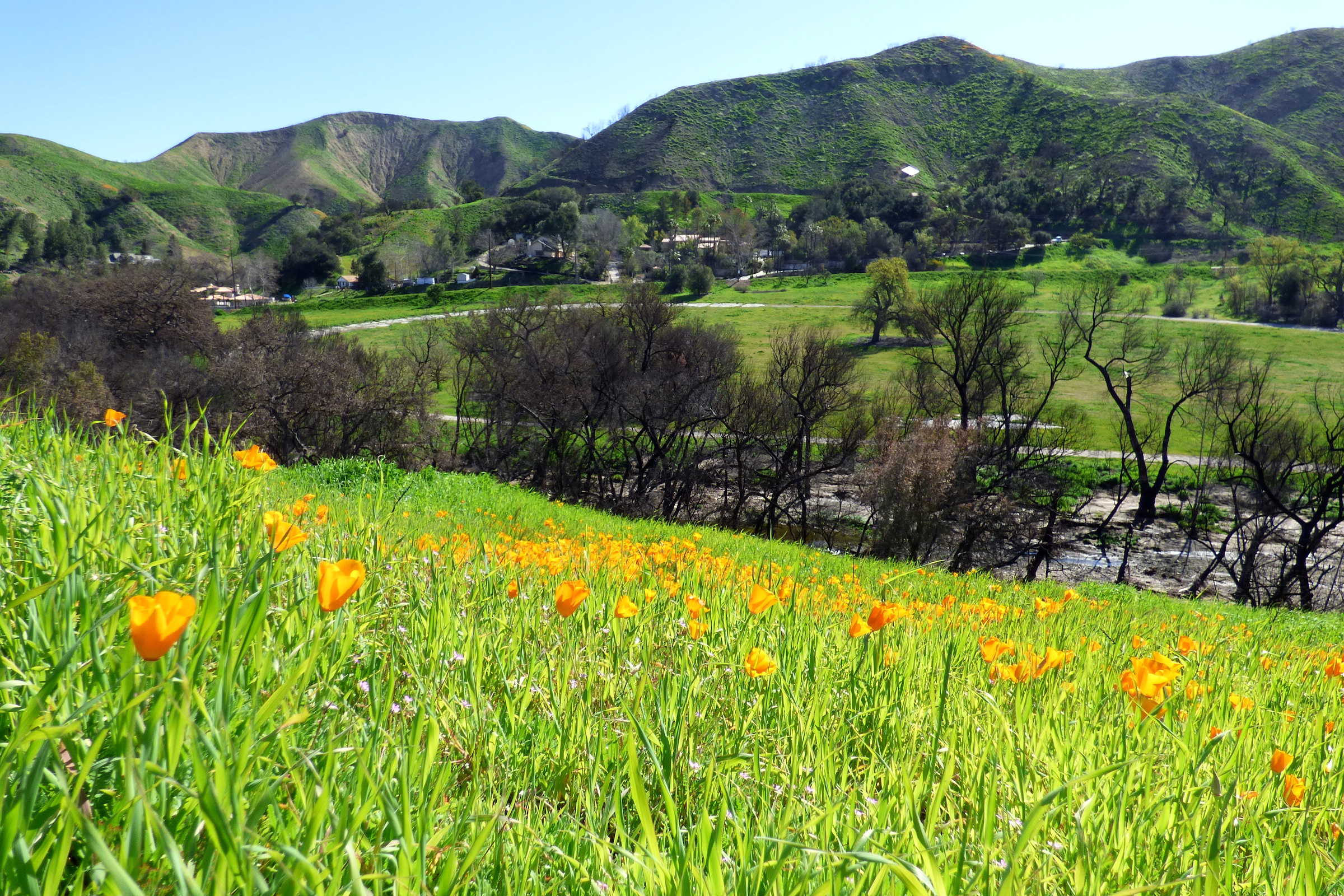 California poppies, the state’s official flower, are in full bloom everywhere in the Santa Monica Mountains. 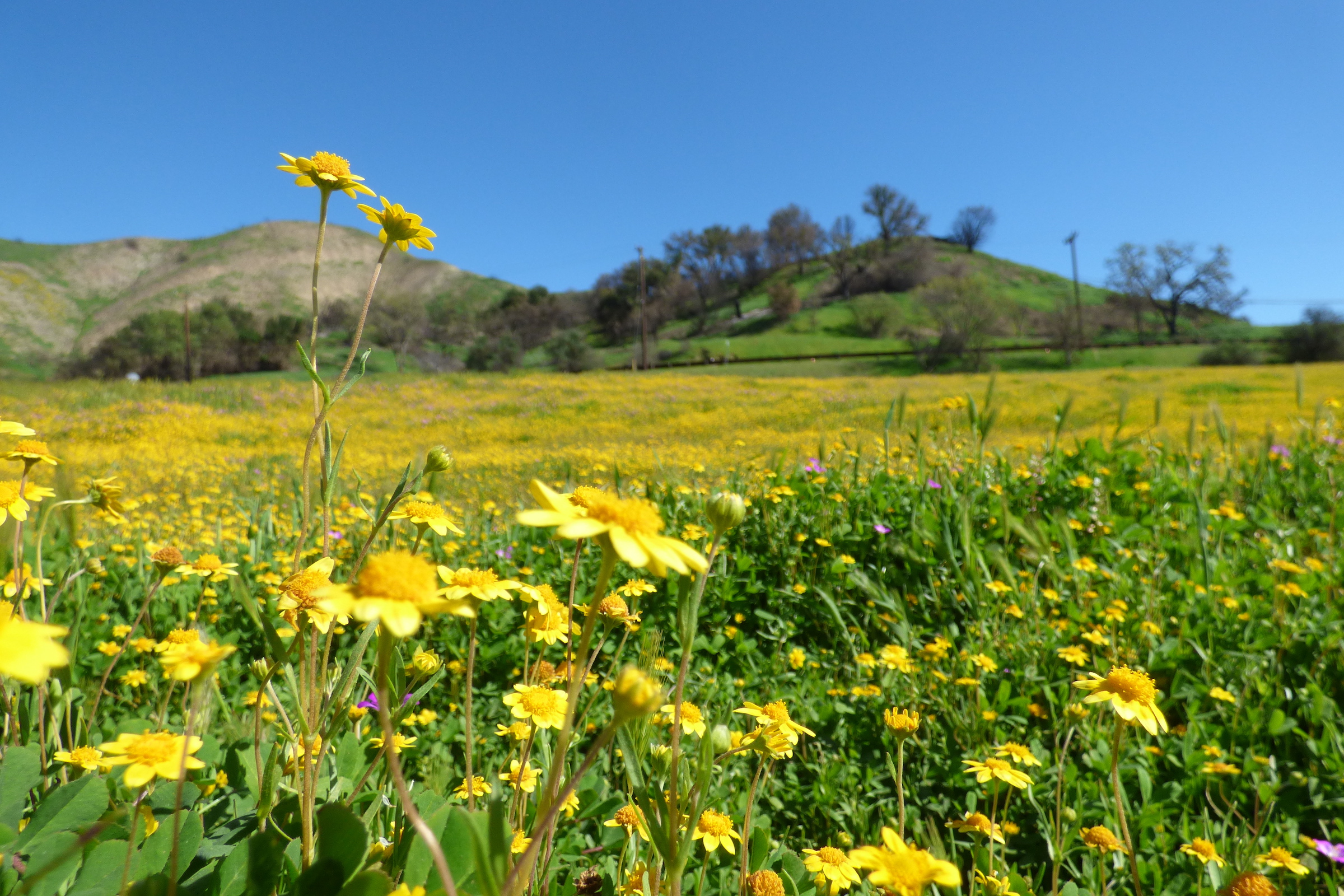 This field of vivid yellow goldfields is right in the parking lot at the National Park Service’s Paramount Ranch. 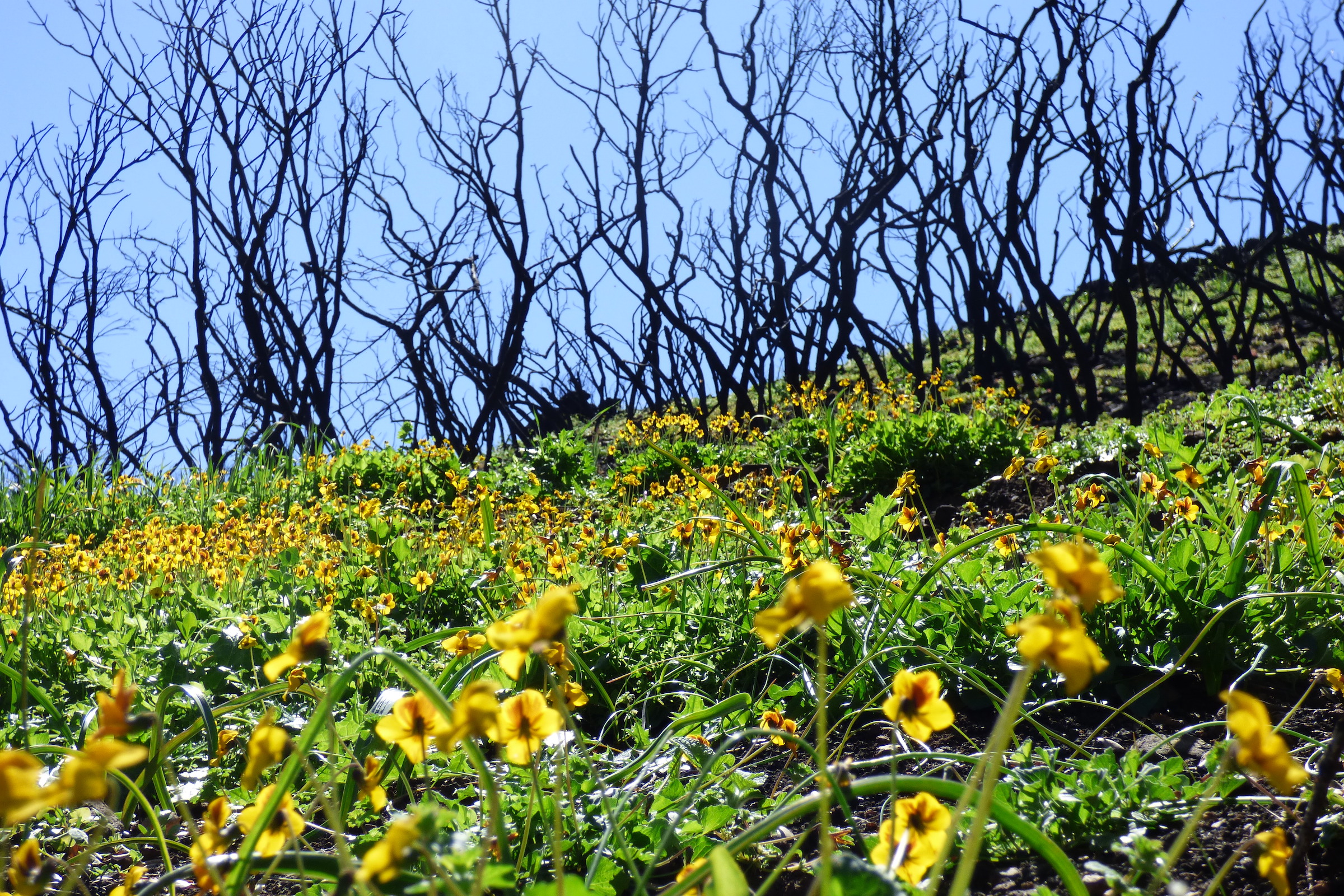 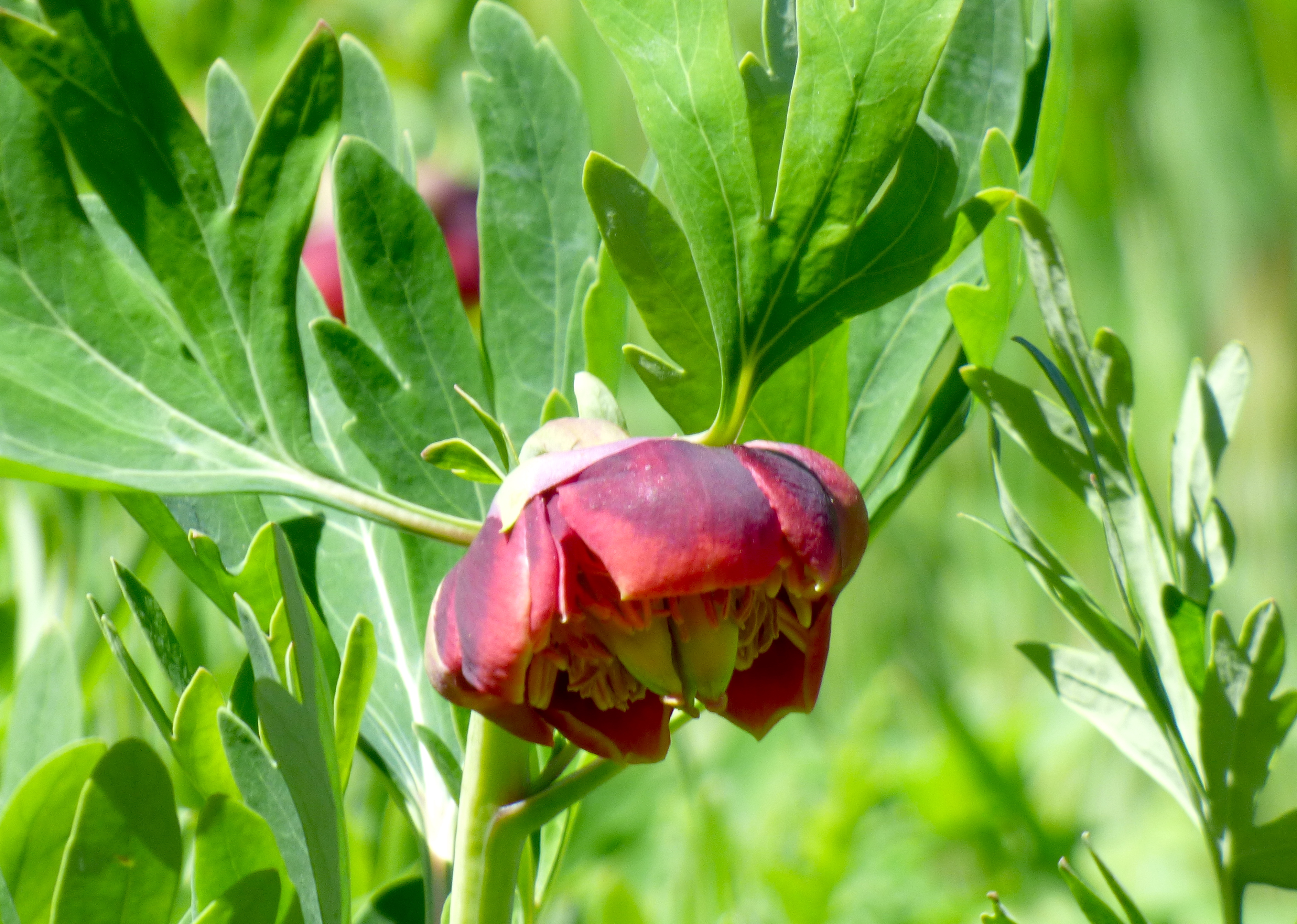 Wildflower watch 2019 continues, with a spectacular variety of California native plants beginning to bloom in the Santa Monica Mountains and across Southern California.

The Antelope Valley Poppy Reserve is reportedly off to a slow start this spring, due to cool weather. Peak bloom is now expected in April, but the Highway 15 area just north of Lake Elsinore is at peak bloom and attracting large crowds and national attention, as conservationists try to make narcissistic social media posters aware of the damage done by trampling the flowers. The crowding was so extreme on March 17 that the area was briefly closed for safety and traffic control. “The situation has escalated beyond our available resources,” an overwhelmed Lake Elsinore city official tweeted. Borrego Springs, near Anza Borrego State Park, is also reaching peak bloom and bracing for “flowergeddon,” a potential repeat of the 2017 wildflower stampede that brought 200,000 flower-seekers  to the small town, which only has a population of around 3500.

One doesn’t need to travel far this spring to see wildflowers. In the Santa Monica Mountains National Recreation Area,  a week of warmer, dryer weather has helped bring peak bloom to early flowers like poppies and goldfields, while many wildflowers are just starting to flower.

Southern exposures are—unsurprisingly—the first areas to bloom. Standouts this week throughout the local mountains include the deep red flowers of California’s only wild peony (Paeonia californica), which grows on sunny hillsides among the chaparral, and greenbark ceanothus—in many places more a small tree than a shrub—covered in a white or pale blue froth of sweet-scented flowers.

A drive along Mulholland Highway from Malibu Canyon to Cornell Road offers a good look at the post-fire wildflower bloom. Top parks to experience wildflowers this week include Paramount Ranch, where the parking area has been transformed into a meadow of goldfields and there are patches of poppies, lupins and phacelia on the hills; and Upper Las Virgenes Open Space, which has acres of vivid green grass punctuated with patches of poppies.

In Topanga, the cold weather has delayed peak bloom, but look for pale pink and purple Pacific sweet pea (Lathyrus vestitus)  blooming beside the roads, along with the purple flowers of wishbone bush (Mirabilis laevis).

More wildflowers are appearing every day. The Messenger Mountain News will continue to post wildflower updates throughout the spring.