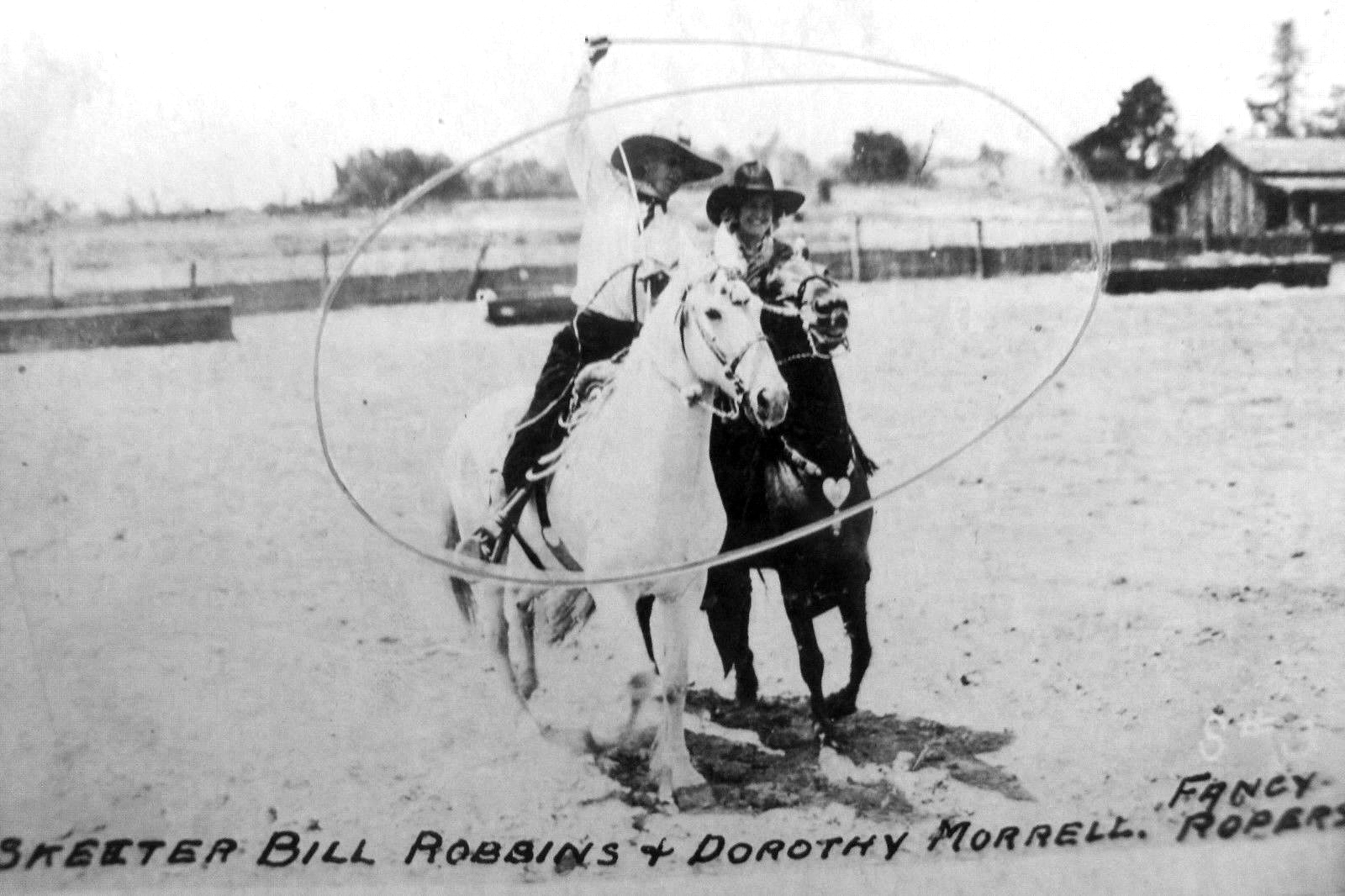 “Skeeter Bill” Robbins and his wife Dorothy Morrell, world-champion ropers and riders. All pictures submitted by the author 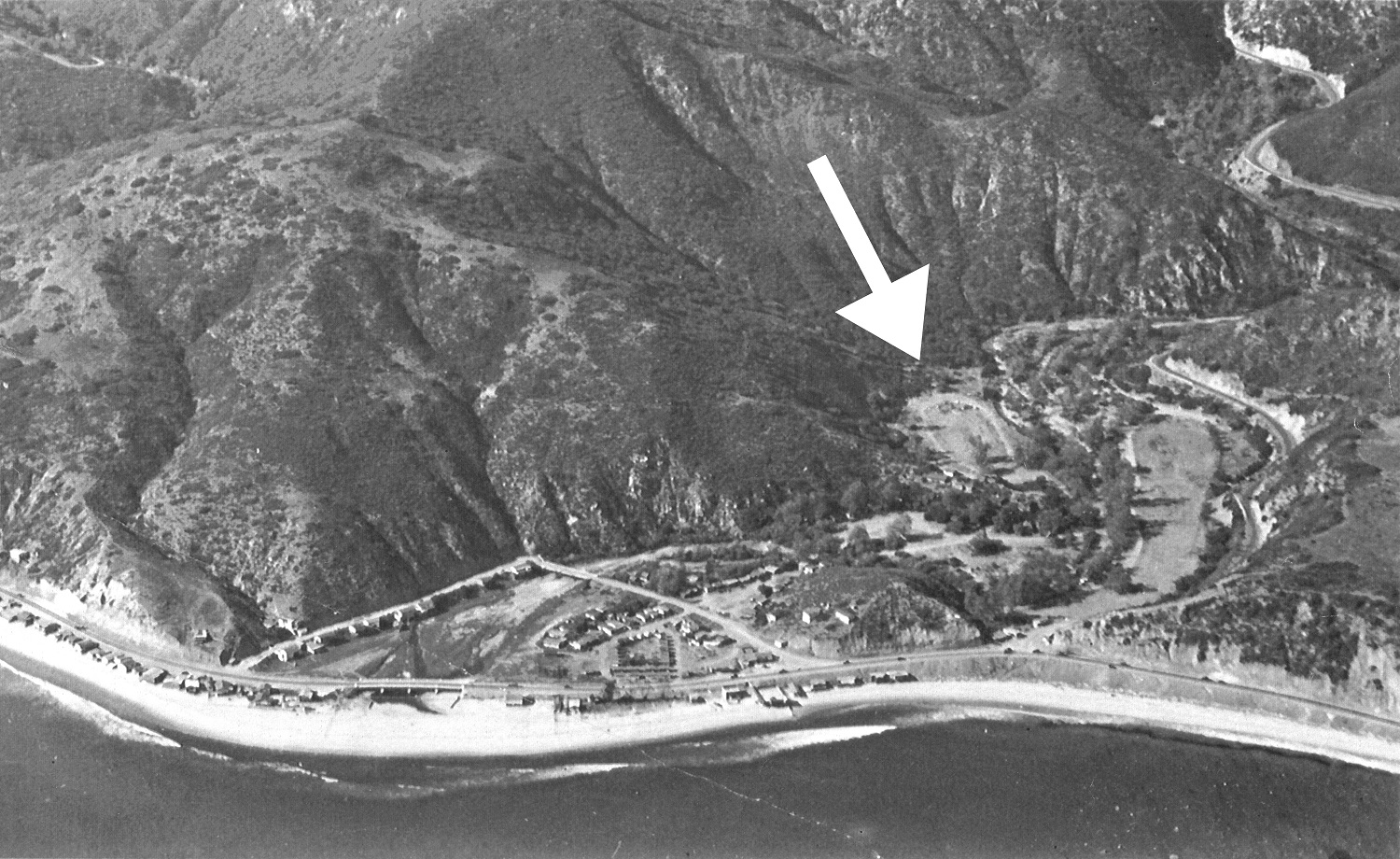 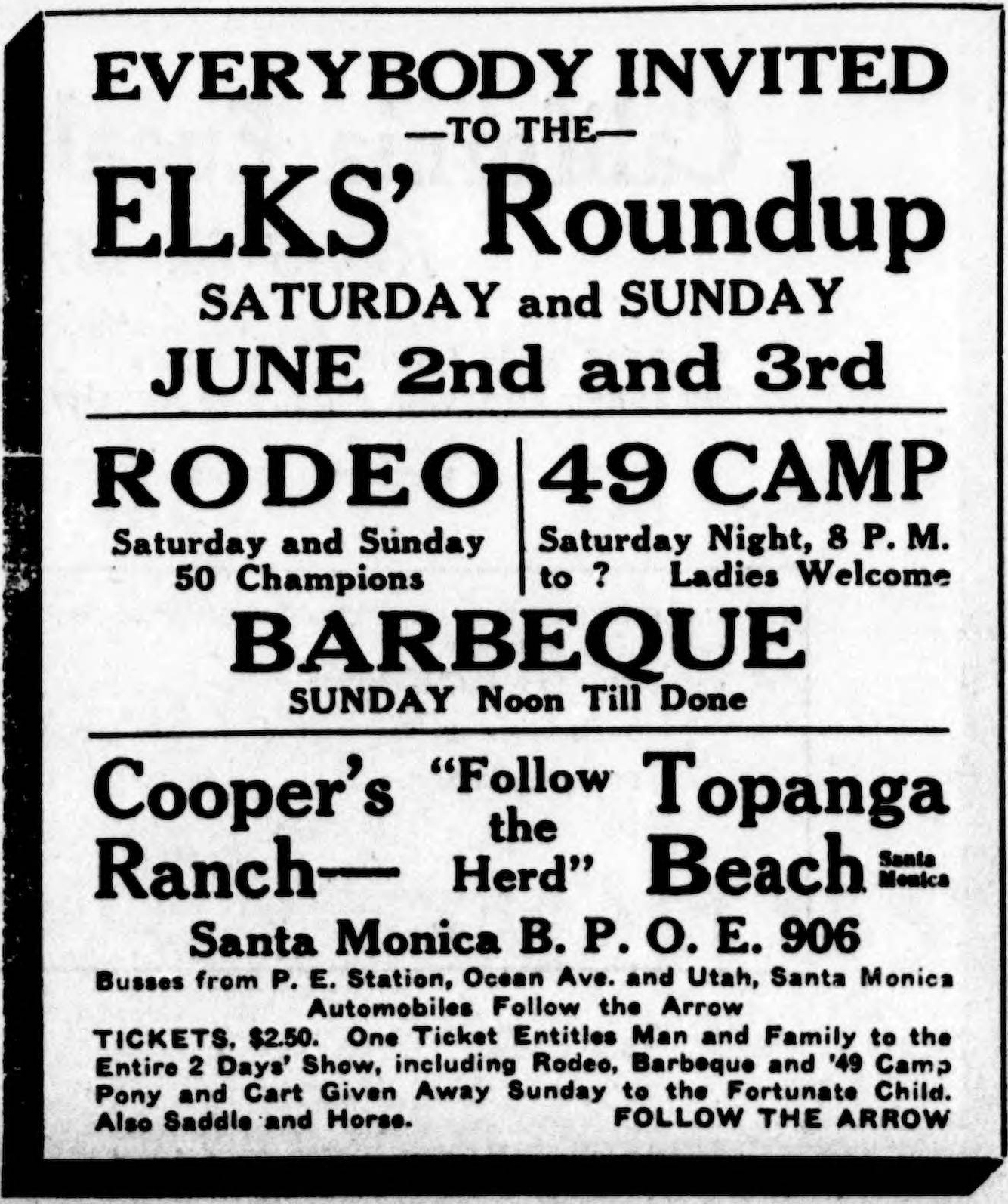 Advertisement for The Elks rodeo. 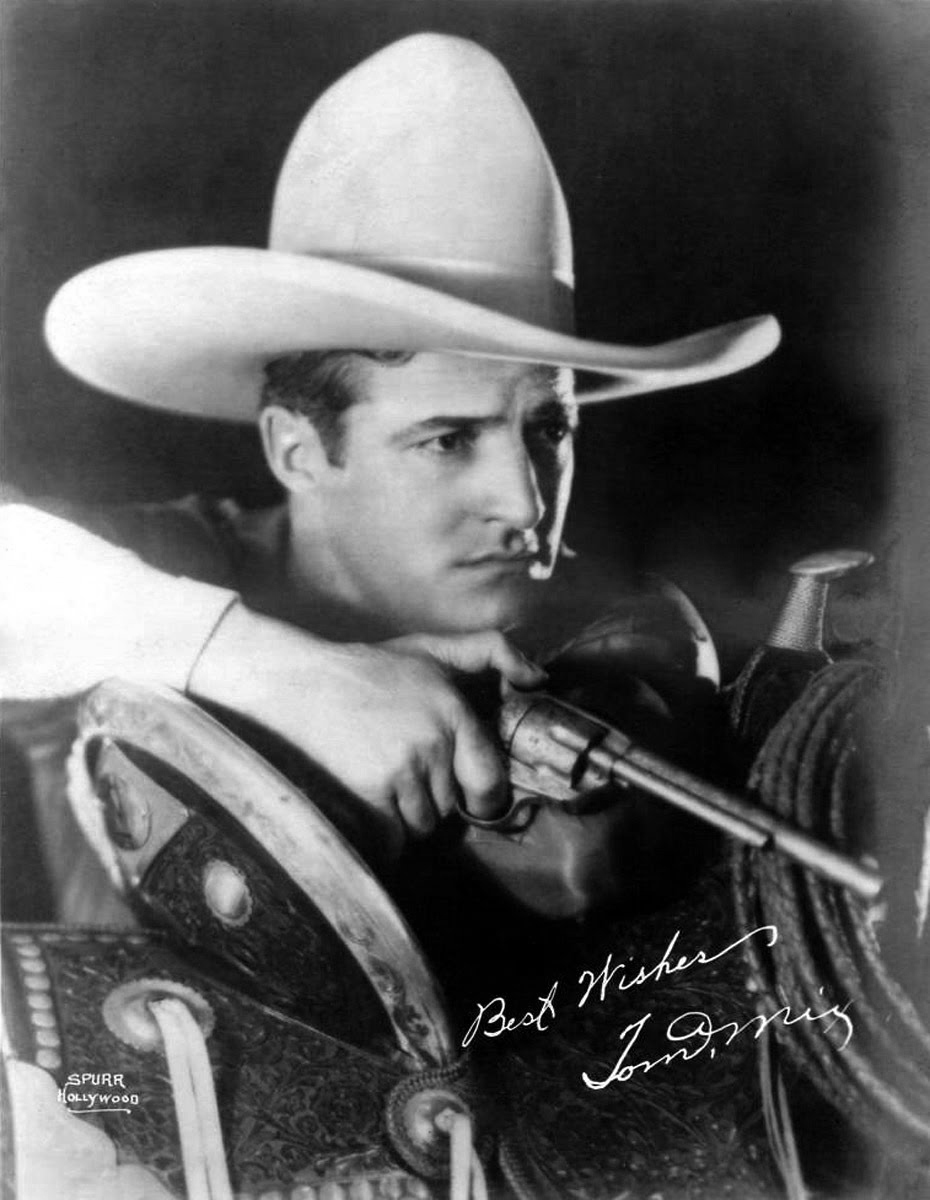 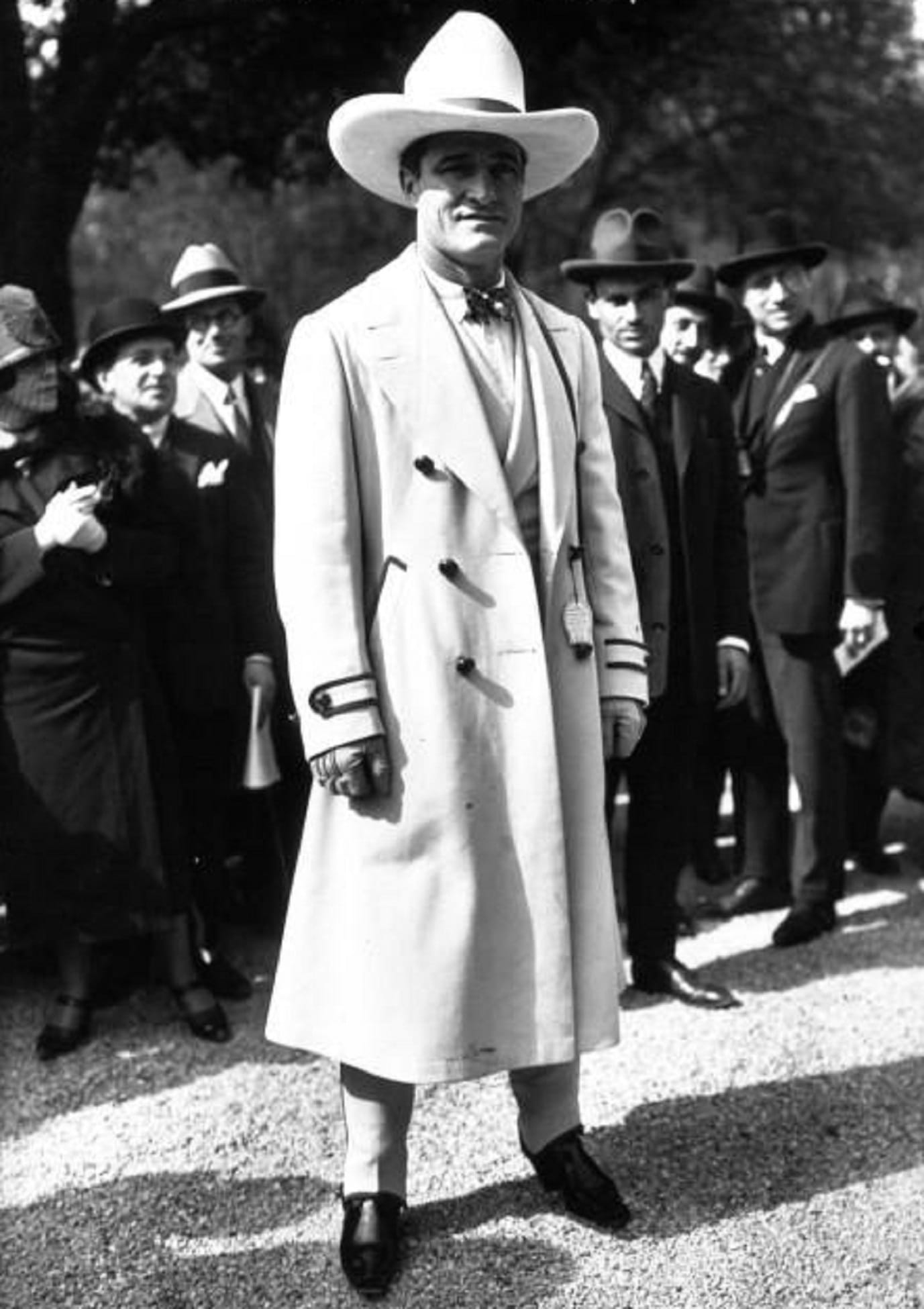 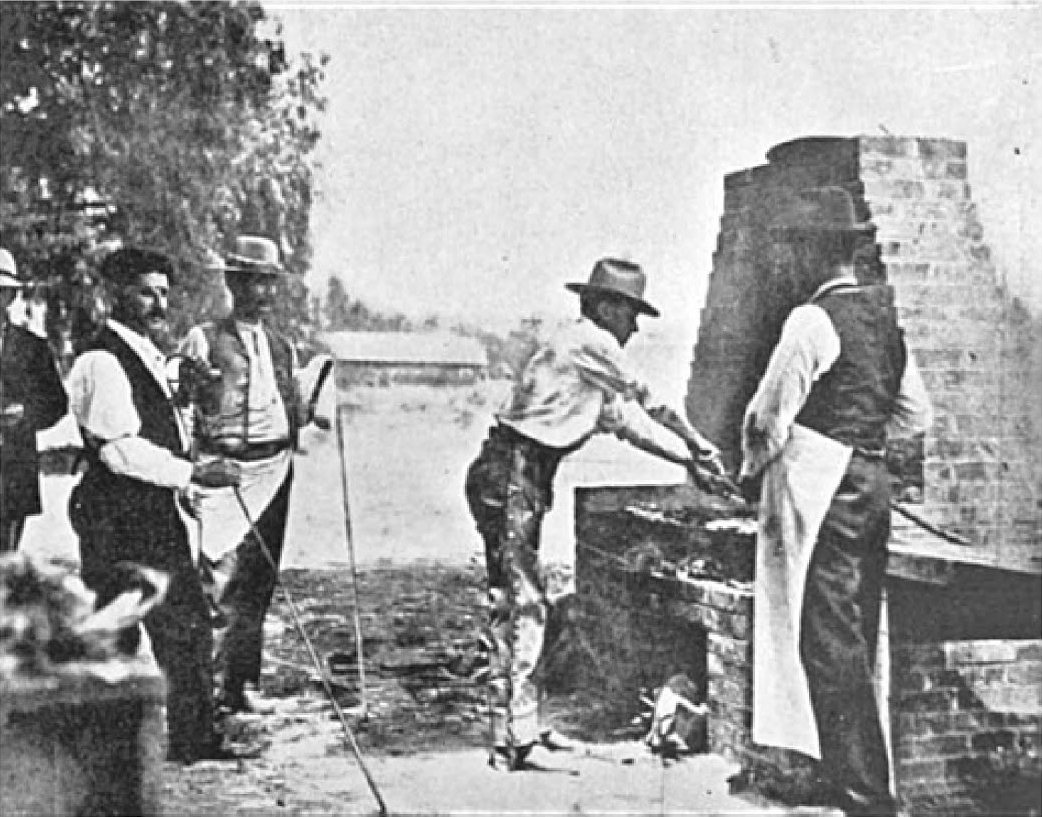 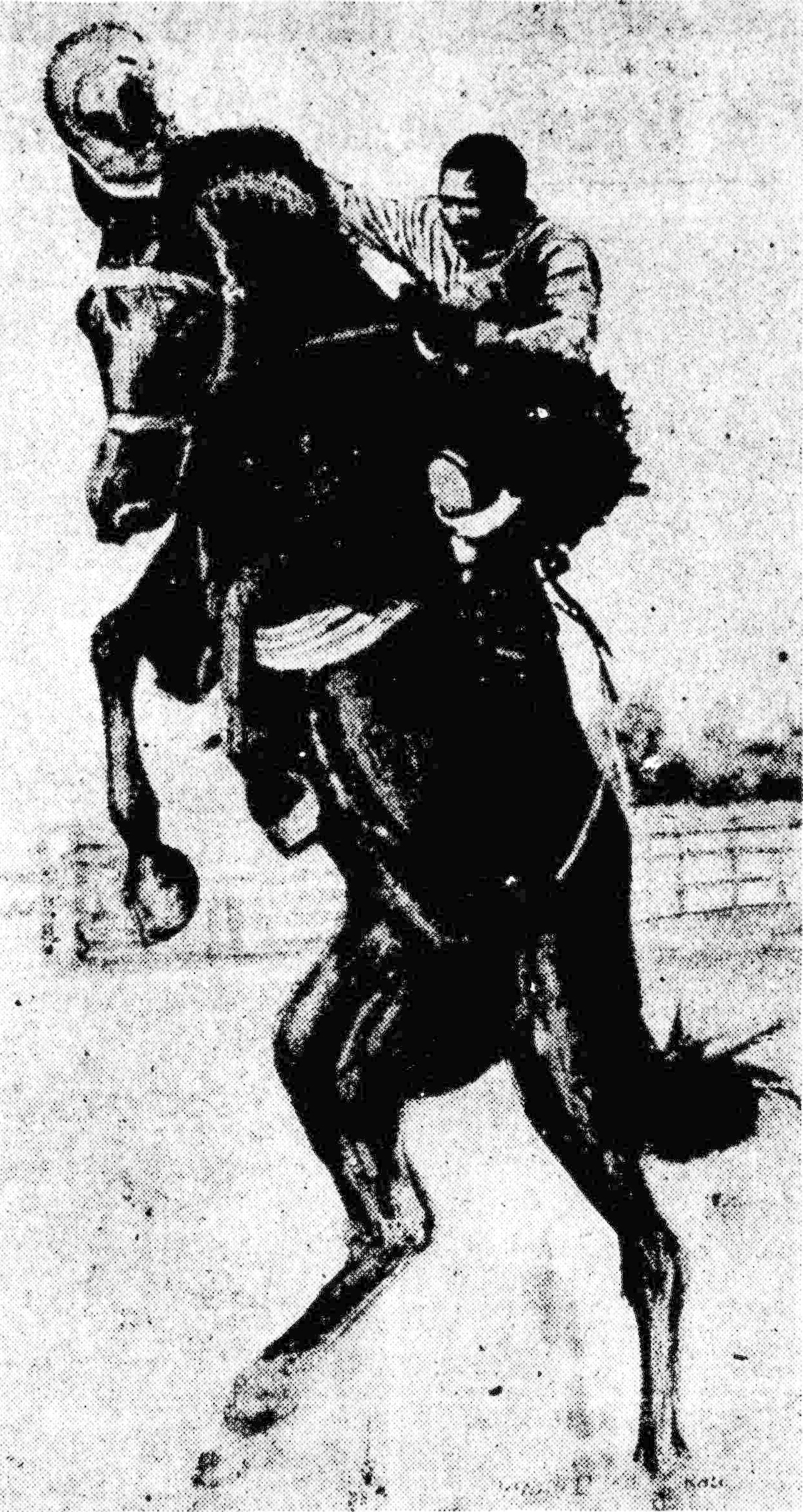 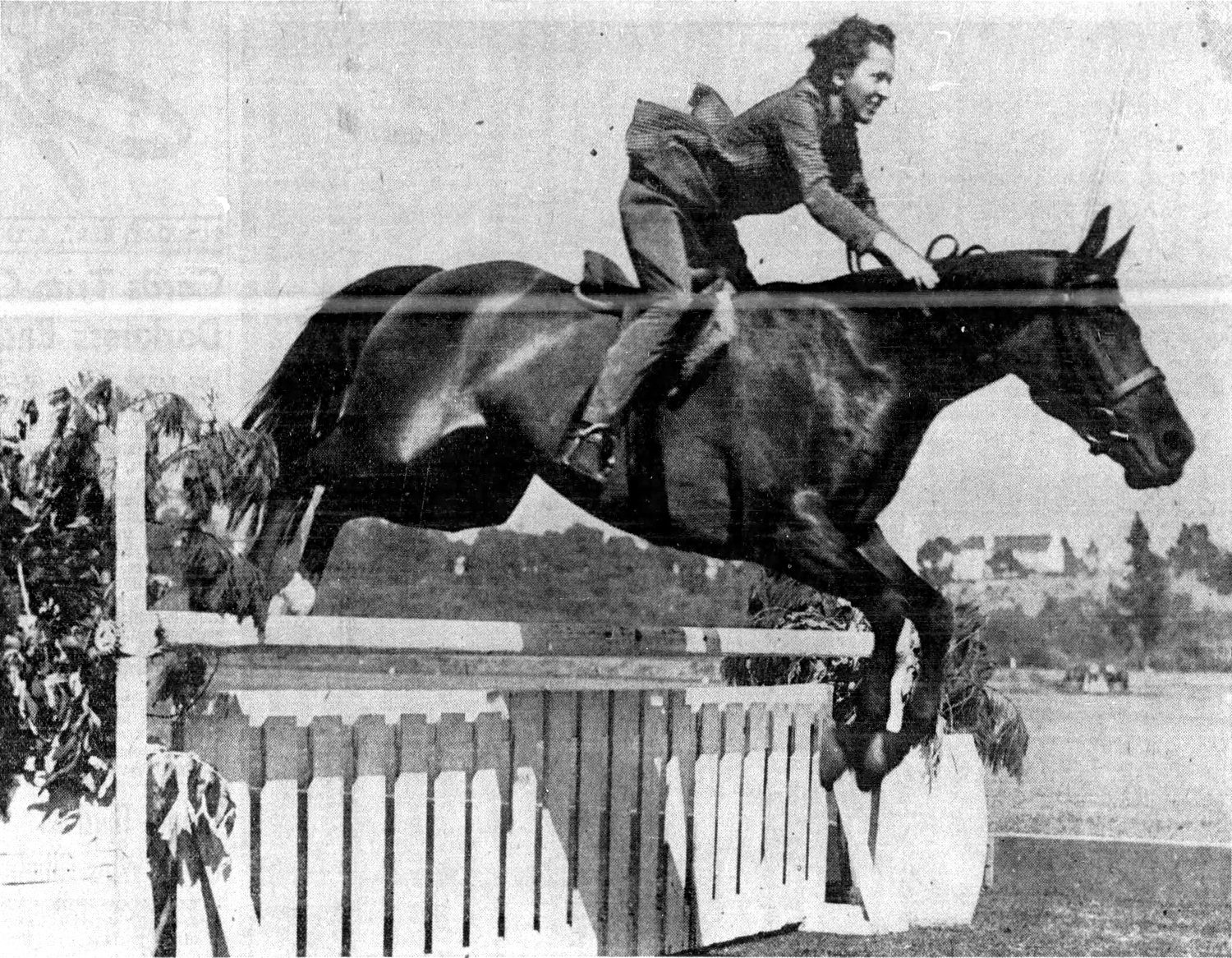 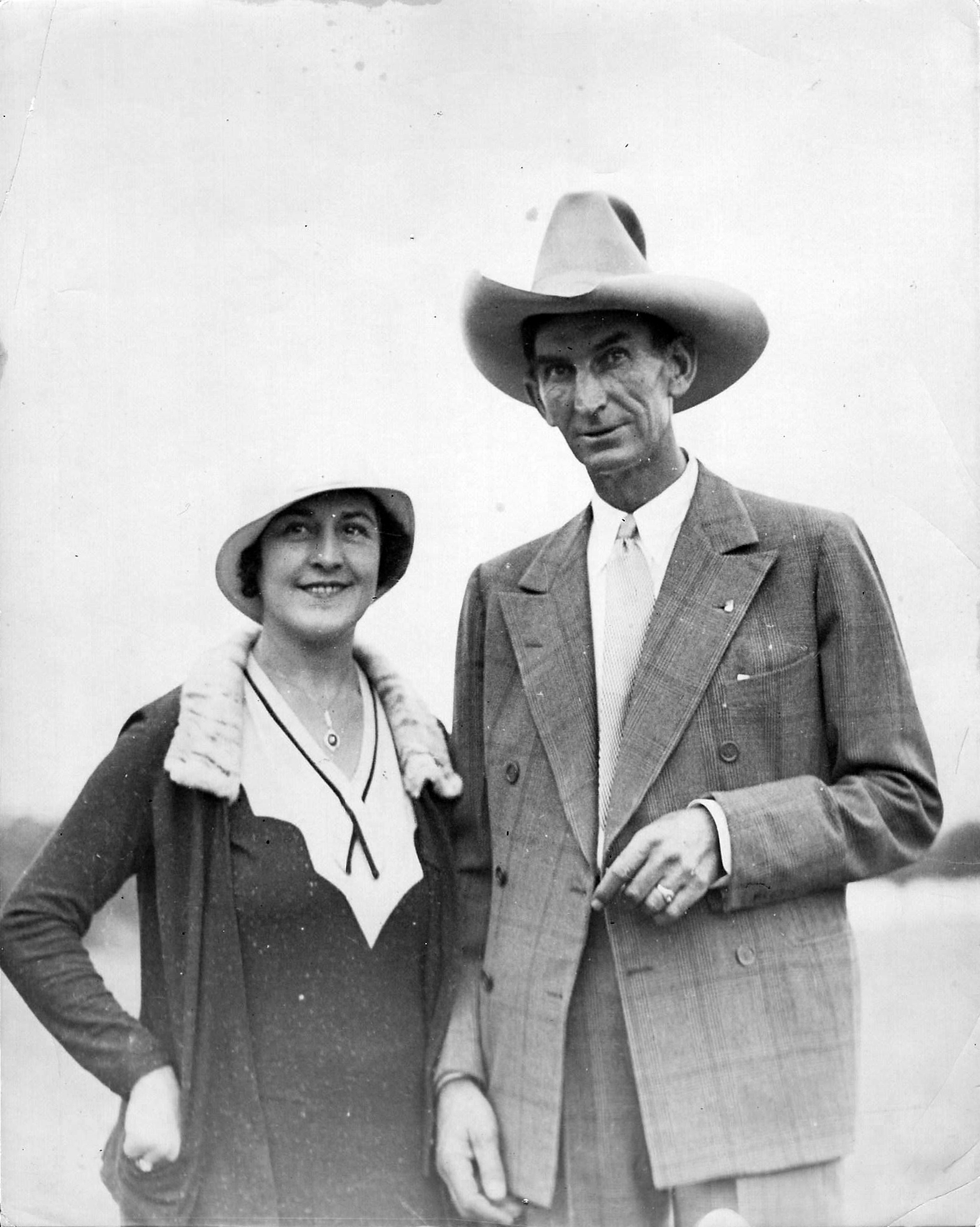 Although rodeo stunts were introduced to the Cooper brothers’ ranch by Helen Gibson in 1921, and the first official rodeo was thrown there in honor of Sheriff William Traeger in 1922, the Topanga rodeo truly flourished in 1923, when at least five rodeos were held.

The biggest rodeos were thrown by The Elks and Moose Lodges, two fraternal clubs that would have been present at Traeger’s rodeo, since he was a member of both.

On June 2-3, 1923, the Elks threw a two-day rodeo for the stated purpose of raising money to send their band to a convention at the Grand Lodge in Atlanta, Georgia. However, much more money must have been spent in preparing for this “monster rodeo.”

Nearly 100 carpenters were employed to build the arena, grandstands, and “Days of ‘49” town.

“A regular frontier town will be built with all the necessary dance halls and gambling dens. The old-fashioned bars will be much in evidence with all the old ‘kick’ in everything but the liquid goods, but a tribe of dance hall girls will be there to make the merry makers forget that incident of ancient history.” (“Elks of Entire Southland Coming to Topanga Beach Rodeo June 2-3,” Santa Monica Evening Outlook, May 18, 1923)

The rodeo’s director, George C. Flores, organized “the greatest line-up of real stars of the arena that has ever been brought together for a wild west show in Southern California.” Fifty champions, along with steers and wild horses, were brought from as far away as Oregon, Montana, and Wyoming.

Special attractions included the act of “Skeeter Bill” Robbins (1887-1933) and his wife Dorothy Morrell (b.1888), world-champion ropers and riders.

Native American cowboy, Miguel Severas from Sonora, Mexico, formerly a follower of Pancho Villa, challenged anyone in California to beat him to the $100 prize for the roping contest.

Multiple world champion “Tuck” Gibson rode Steamboat, “said to be the world’s most famous trained bucker.” Before the fence to the arena was completed, Tuck and Steamboat had an exciting practice ride that ended half a mile up the canyon. Heavy brush prevented cowboys from roping Steamboat, so Tuck had to hang on until the horse tired out.

The food was prepared by “world’s famous barbecue artist” Joe Romero (1852-1932). This East LA cowboy earned his reputation by feeding around 5,000 people at a time, and catering around 25 events a year for almost 50 years. His method of burying the meat in a pit of hot coals was a point of local pride for Angelenos, who looked down on grilling as suitable only for Boy Scouts. One of his specialties was a bull’s-head breakfast, which fell from fashion in the late 1920s.

“Virtually all of Southern California, be they Elks or not,” attended the rodeo, including all the orphans and poor children of the Santa Monica Bay cities, who had been invited for free. Special bus service was set up from Santa Monica and the Elks donated their cars to help transport “the largest crowd of people who ever witnessed a rodeo in these parts.” Guests camped overnight on the beach to enjoy the two-day event.

“Thirty thousand people attended the Elks’ round-up at Topanga canyon yesterday, the attendance passing wildest expectations…. The road from Santa Monica to the show grounds was like Broadway on a busy day…. Seating capacity for 25,000 people around the arena was soon filled to overflowing and thousands of spectators eager to see the show dotted the hills on all sides…. Six-guns, spurs, high-heeled boots and two-gallon hats were to be seen in all directions….” (“Crowd is Estimated at 30,000,” Santa Monica Evening Outlook, June 4, 1923)

After the successful Elks rodeo, and with the infrastructure now in place, it seemed like every summer holiday or event at the Coopers’ Ranch would be celebrated with a rodeo.

“Bringing back the spirit of the wild west with… its lawlessness and its freedom” must have felt like the perfect remedy for the Prohibition, anti-gambling times. And since these rodeos were hosted by Deputy Sheriff Archie Cooper, and lightly policed by his close friends, Sheriff Traeger and Deputy Sheriff Frank DeWar, the rodeo guests probably got away with a lot. At least, no arrests were reported.

On September 8-9, 1923, the Moose Lodge threw their own two-day rodeo event. The best cowboys were drawn back to compete for generous prizes, and there was an all-night dance in the beach pavilion with music by The Moose Orchestra.

Joe Romero was again hired to barbecue and used buffalo meat provided by cowboy Sam “Buffalo Smith” of Coconino County, AZ, who boasted he owned the only buffalo herd in the Southwest.

One rodeo performer who did not have to travel far was Dorothy Cooper, the daughter of Archie. Dorothy couldn’t have been more than 15 years old because Archie was married in 1907, yet it was reported that “Miss Cooper’s riding has long startled rodeo fans wherever she has appeared.” Perhaps she got her early training from Helen Gibson.

Dorothy was billed as “the champion girl rider in the Southwest,” but her title was challenged by Myrtle Gibbins of Shelby, Montana, a last-minute entry in the women’s stunt-riding event. It’s not known who won, but Dorothy was still competing as late as 1940 at the Riviera Country Club in the Pacific Palisades, where she was a champion jumper.

Besides the usual events, the Moose rodeo featured some odder entertainments like a fat men’s race and a midnight badger fight.

“Anyone who has ever seen Secretary [Dave] Hurley’s famous badger in action will appreciate what a momentous occasion this will be.” (“Loyal Order of Moose,” Los Angeles Times, August 12, 1923)

There was also an early version of a swimsuit contest, hosted by Mack Sennett (1880-1960), known for his short films of “Bathing Beauties.” The winning girl was crowned “The Queen of the Moose,” and tickets were auctioned to ride in her chariot during her triumphal procession.

The Moose rodeo may have been smaller than the Elks rodeo, but attendance was still in the thousands, and shattered “all records for a Moose festivity.”

On September 30, a rodeo thrown for the judges of the Superior Court of Los Angeles was notable because it was hosted by an Elk who was also the most famous cowboy actor of the time, Tom Mix (1880-1940). Mix may even have starred in a film that was shot at the Coopers’ Ranch by the Fox Film Corporation earlier that month. All that is known about this film is that an actor named A. M. Fenton was thrown from a horse and broke his shoulder. A fire destroyed most of the films produced by the Fox Film Corporation in 1937.

Mix’s rodeo was casual, using mostly cowboys employed on the ranch. The barbecue was prepared by the Coopers’ own Spanish chef, Fred Ramirez, who slaughtered a buffalo for it.

In 1924, the Coopers started a riding academy, presumably to capitalize on their ranch’s new rodeo fame. The instructor was H. J. Porter from London, who had previously instructed Canada’s Royal Northwest Mounted Police.

Then, on July 3-6, 1924, the Coopers tried to top the successes of the previous year with “one of the biggest rodeo programs ever attempted,” a four-day event that included bullfighting, for which they claimed to have obtained a special permit.

“Scores of Mexico’s most prominent picaderos, toreadors and matadors [were] chosen to furnish thrills for the spectator.” The star was Refugio “El Cuco” Hernandez, advertised as the most popular bullfighter in Spain. Two weeks earlier, El Cuco had become a local hero by saving a man’s life when a bull broke loose during filming at the Ince Studios, now located in Culver City.

Bud Crone, a well-known Wild West circus performer, contributed “hundreds of his tempered bronchos along with scores of other animals” to the rodeo.

However, bullfighting was bound to be controversial. Miriam Brase, of the Santa Monica Bay Humane Society, warned the Coopers that it was impossible to get a permit to wound an animal. On the afternoon of July 4, she showed up with four deputy sheriffs and had the rodeo shut down.

Although no bullfighting was happening when Brase arrived, she said she had heard rumors that the fights were taking place at a secret location for a select clientele. Since the bullfights were supposed to have started on July 3, it’s possible that some really did happen.

It’s also possible that the bullfights were never intended to hurt the bulls. A year earlier, El Cuco had fought a bull in Tulare, CA, following special rules laid out by the event organizers: “The toreadors will be unarmed and will rely solely upon their agility to escape. Bloodshed is not a feature of the show.”

After the Coopers’ bullfight rodeo was shut down, no future events were planned, and the Topanga rodeo era came to an abrupt end.

Determining the Fate of California’s Coast

The (Super) Power of the Plate