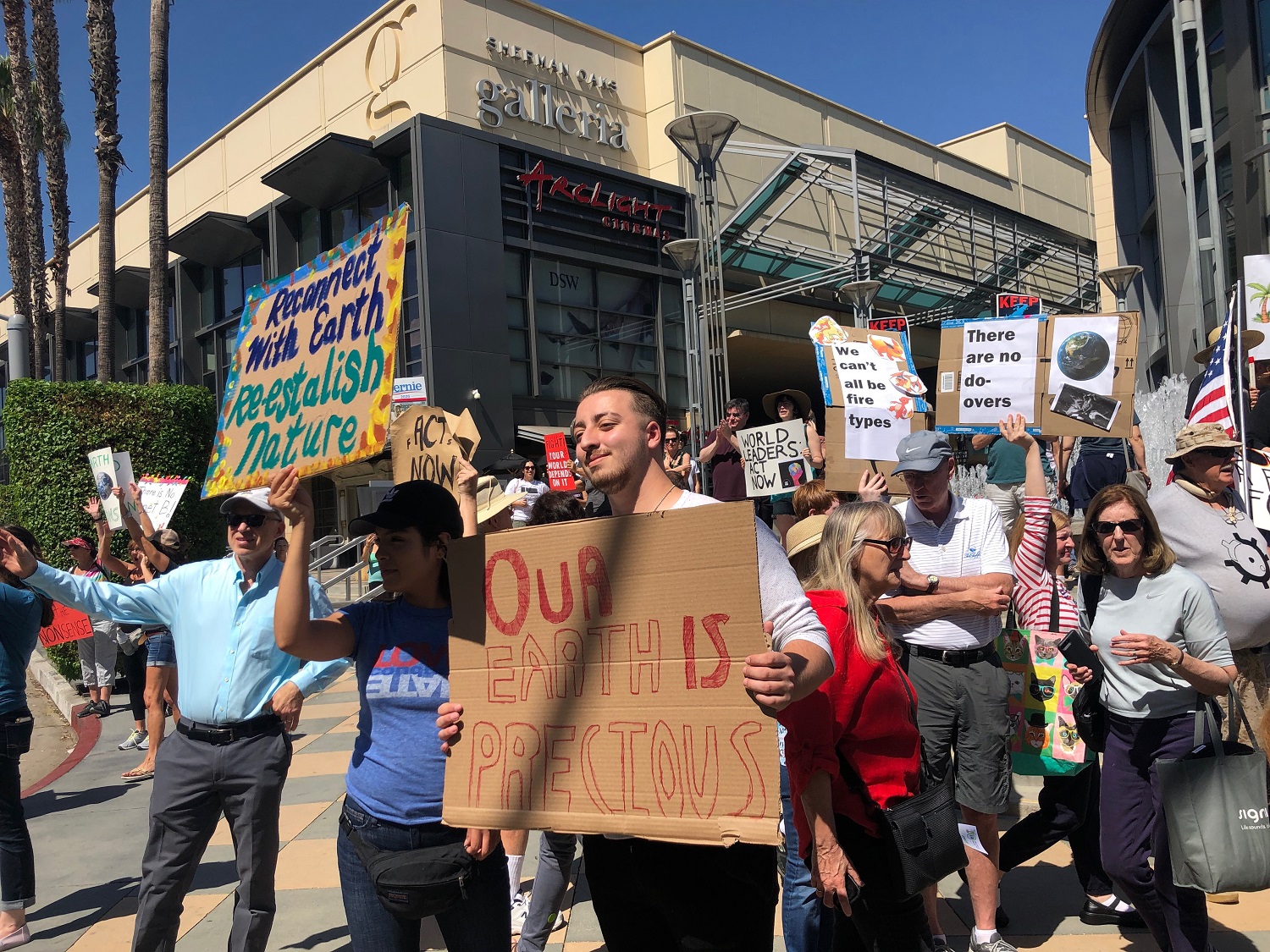 Strikers of all ages raise their signs beckoning support from passing drivers. Photos by Samantha Johnson 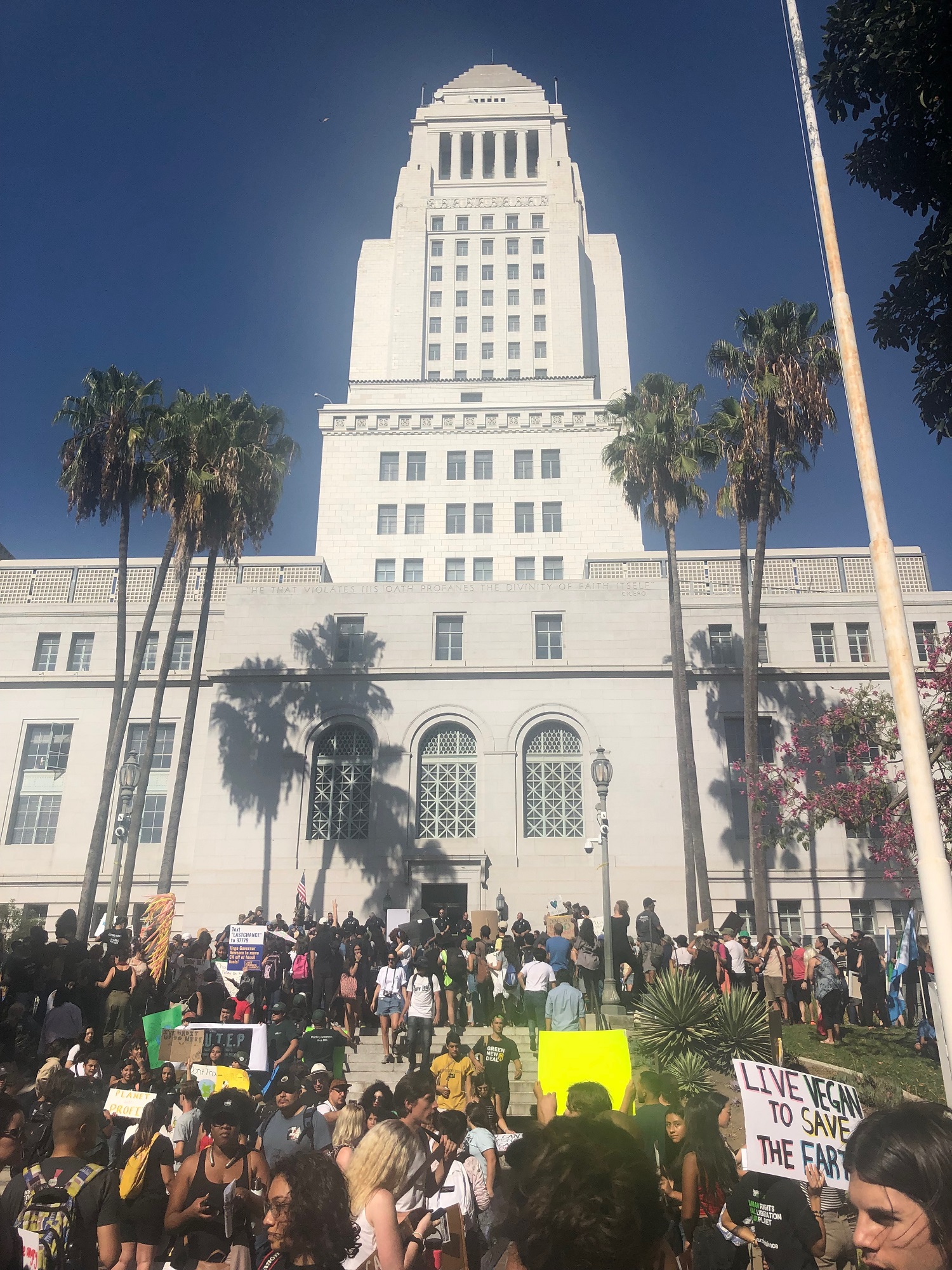 Strikers take a stand in the shadow of Los Angeles City Hall. 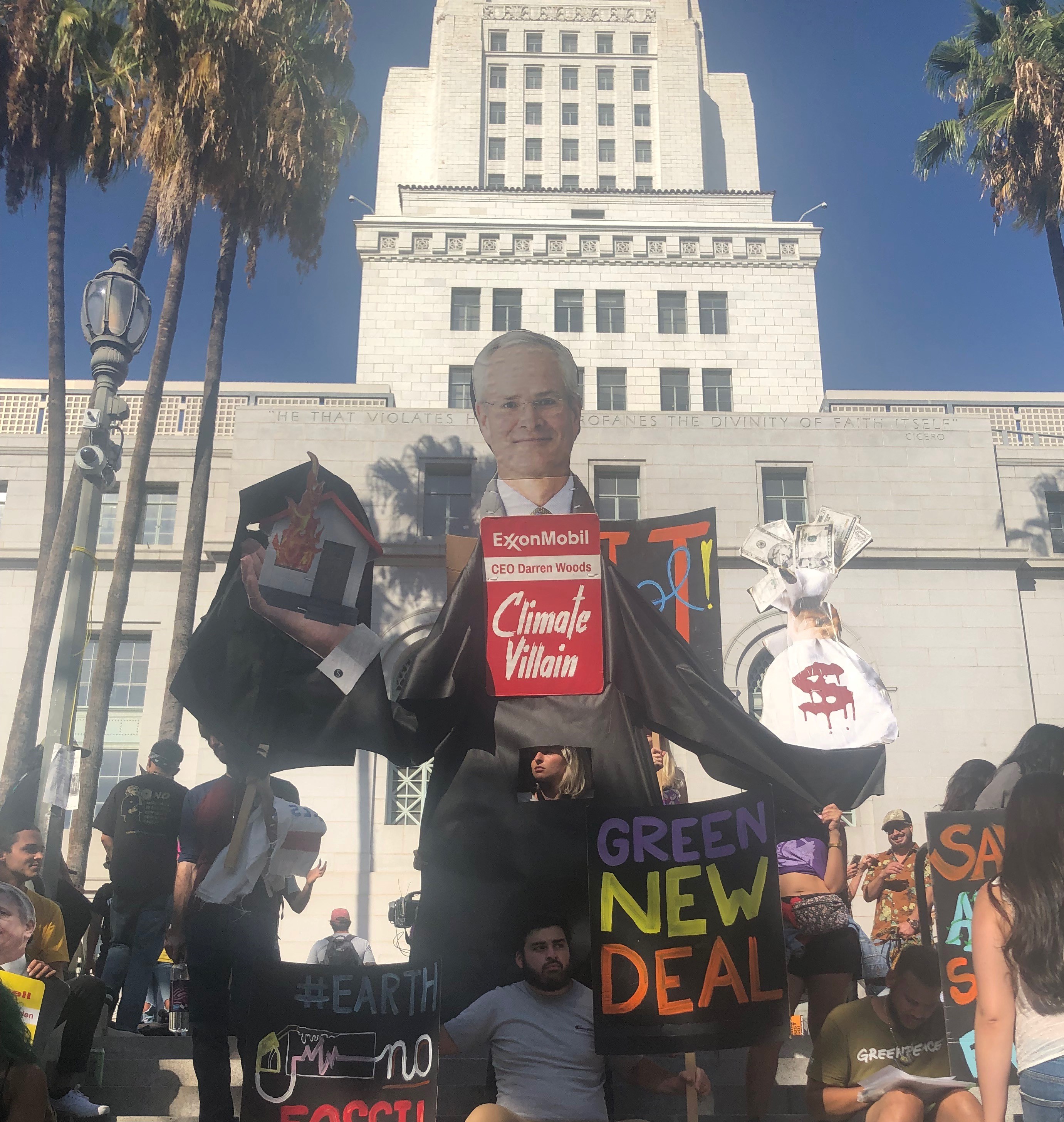 Teenage protestors spend hours on the steps of L.A. City Hall with their massive, handcrafted display. 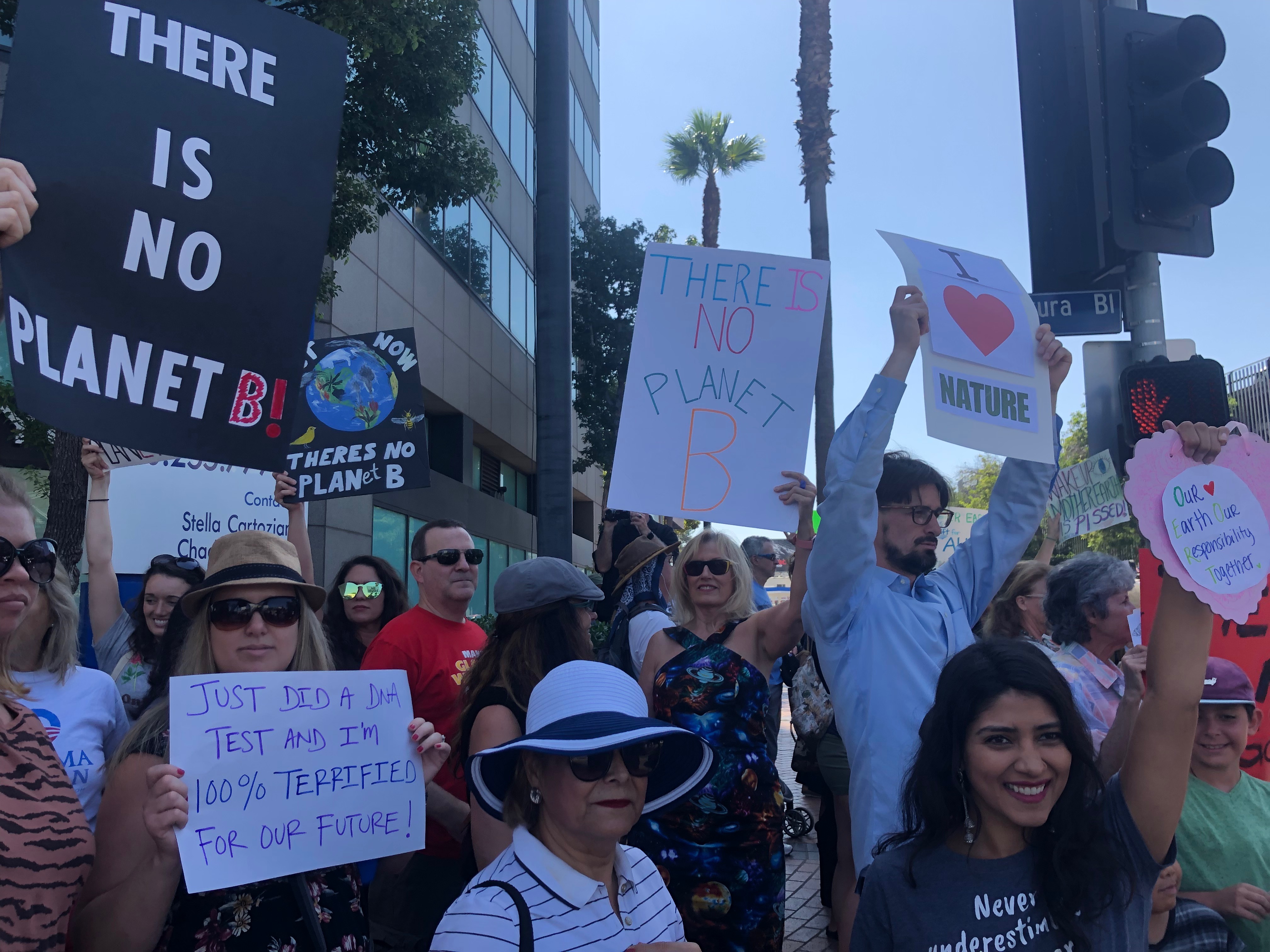 Strikers proudly display their signs after marching to the opposite corner of the wide intersection. 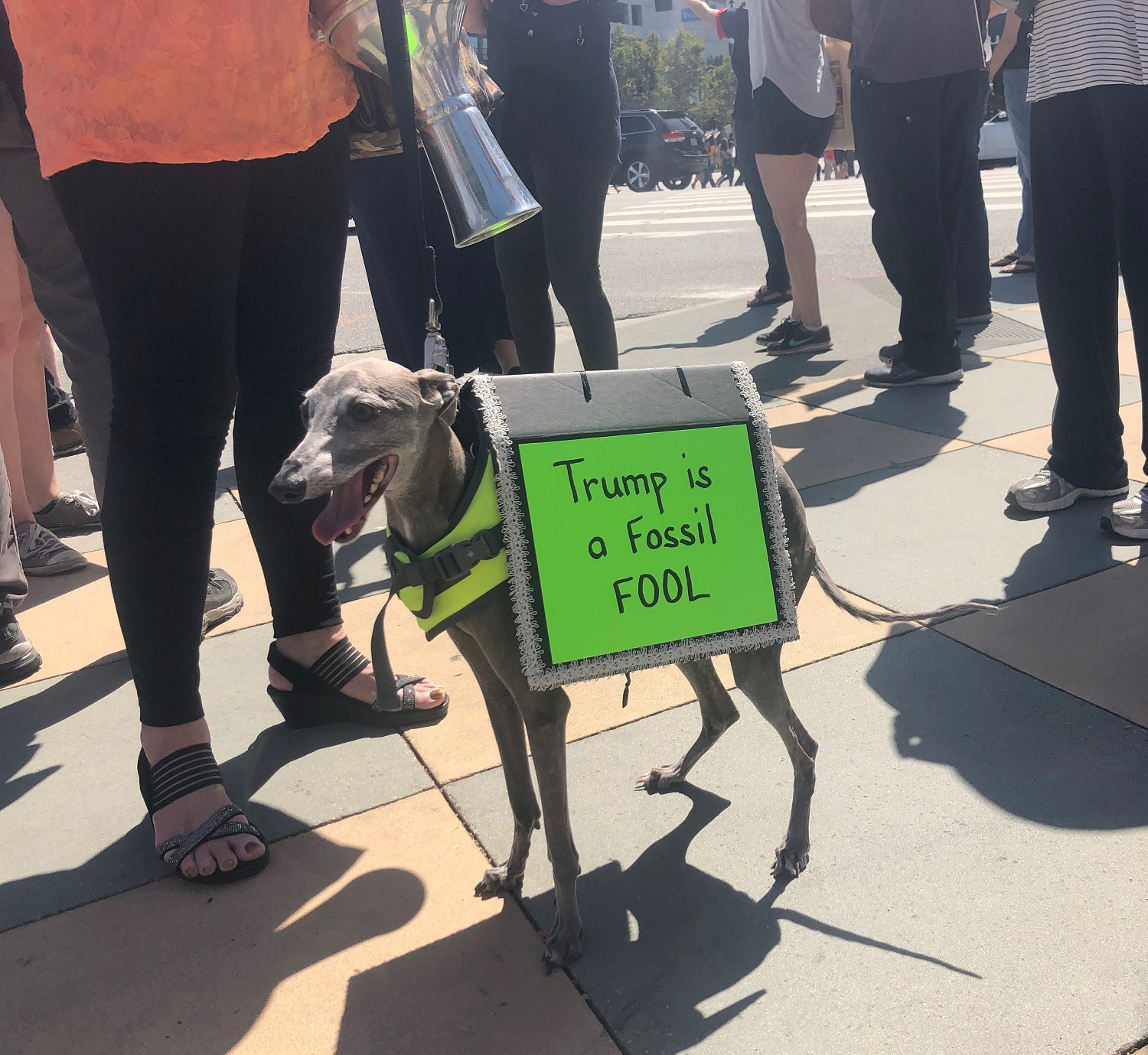 The canine contingent got in a few licks of their own.

“Change is coming whether you like it or not!”

What started as one teenage girl’s lone protest one year ago has grown into a world-wide movement. Sixteen-year-old Swedish activist Greta Thunberg’s strike campaign galvanized millions of students internationally.

On September 20, protestors of all ages filled the streets demanding their governments take action to address the climate crisis. Thousands of demonstrators descended on downtown Los Angeles and myriad others across L.A. communities for the global climate strike. Prominent speakers offered their support at the student-driven rally downtown including Los Angeles Mayor Eric Garcetti and celebrity activist Jane Fonda.

“These young people are the true adults in the room, but we cannot let our youth bear the burden for what the extractor class, the billionaires and the politicians they’ve bought off, have done to us. We must stand with youth,” Fonda said. “We were hoodwinked by the fossil fuel industry into believing the Earth was ours to endlessly exploit.”

The young strikers demanded to be taken seriously and their outrage was palpable. Many tearfully vented their frustrations and hopes for the future. After marching from Pershing Square, the protestors ran up the steps to the doors of City Hall. Shouts of “Free speech!” and “We have rights!” could be heard from the teeming crowd. Students who skipped school to join the protest passed a megaphone around, sharing a common refrain:

“We’re fighting for our future because we’re the ones who have to deal with this when they’re all dead and gone,” one fifteen-year-old girl said of the adult officials charged with safeguarding the future. For these teenagers and children their purpose couldn’t be more evident or more urgent.

“I want my mom to be a grandmother and I want to be a mother,” she continued. “And I want to save our future!”

Nearby, in a simultaneous sister event, more than 300 people—and several dogs—gathered for the San Fernando Valley Strike, one of dozens happening across L.A. County. The West Valley Chapter of The Climate Reality Project, founded by former U.S. Vice President Al Gore, was the main organizer of the protest.

The largely adult crowd assembled at the corner of Ventura and Sepulveda Boulevards by the fountain at the Sherman Oaks Galleria. The group waved and cheered as a steady stream of motorists honked in solidarity. The strikers led chants of “Planet over profit!” and “Unite behind science!” as they marched and packed each corner of the intersection. One striker remarked at how pleased she was with the turnout for the Valley, as new groups, with signs held high, arrived to swells of applause. Protestors stood in the heat with signs reading, “There is No Planet B,” “Save Our Children’s Future!” and “Fight! Your World Depends on It!” Two women held up cardboard jet planes with cotton streams signifying their emissions. The crowd erupted ecstatically as one woman waiting at the traffic light offered an ongoing burst of short honks and a city bus driver followed suit. Another demonstrator pulled out his guitar to strum the Beatles’ “All You Need Is Love” while others sang with him.

Many of the activists connected with others across Los Angeles and the globe through social media. “If you look on Twitter, around the world millions of people are marching today,” one millennial girl in flower-print pants announced as she recorded the event on her phone.

Thousands marched in New York City, led by Greta Thunberg, who sailed across the Atlantic Ocean in an emissions-free vessel to address the U.N. at the September 23 Climate Summit. Hundreds of thousands of demonstrators assembled in Berlin, London, Sydney, and many other cities worldwide for the strike.

These strikes were often fraught as the stakes couldn’t be higher, but the massive turnout was inspiring. Now organizers are hoping to build on that momentum and turn the fervor into actionable change.

For Thunberg’s part, she didn’t mince words in her speech to world leaders at the United Nations Summit.

“People are suffering. People are dying. Entire ecosystems are collapsing. We are in the beginning of a mass extinction and all you can talk about is the money and fairy tales of eternal economic growth. How dare you,” Thunberg said. “The world is waking up and change is coming whether you like it or not.”

Video Shows P-61 Chased by Another Lion near 405