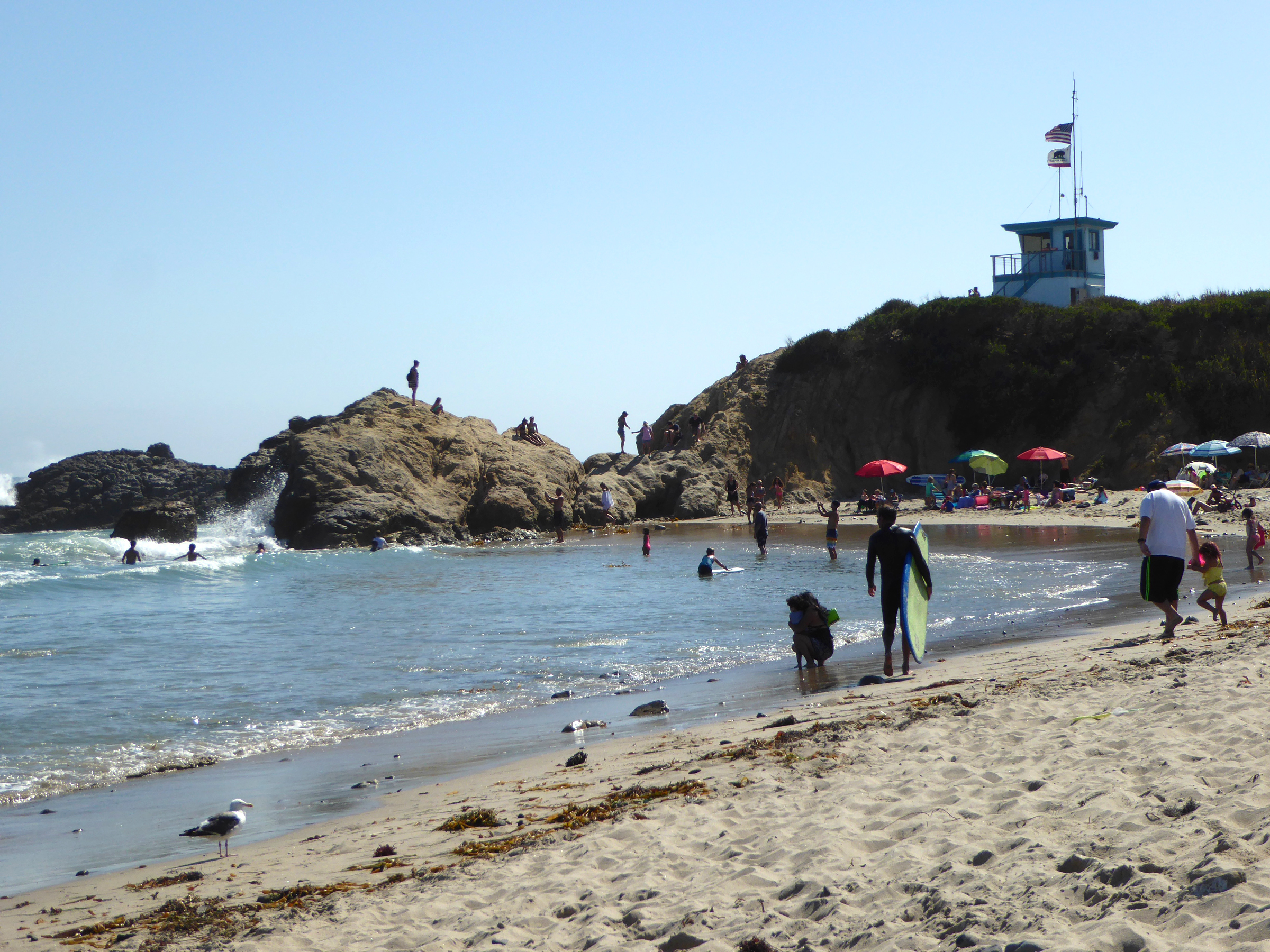 Leo Carillo State Park offers something for everyone: tide pools, sandy beaches, hidden coves, a famous surf break, a picturesque cliff-top walk, and even a rock cave to explore. Photo by Suzanne Guldimann 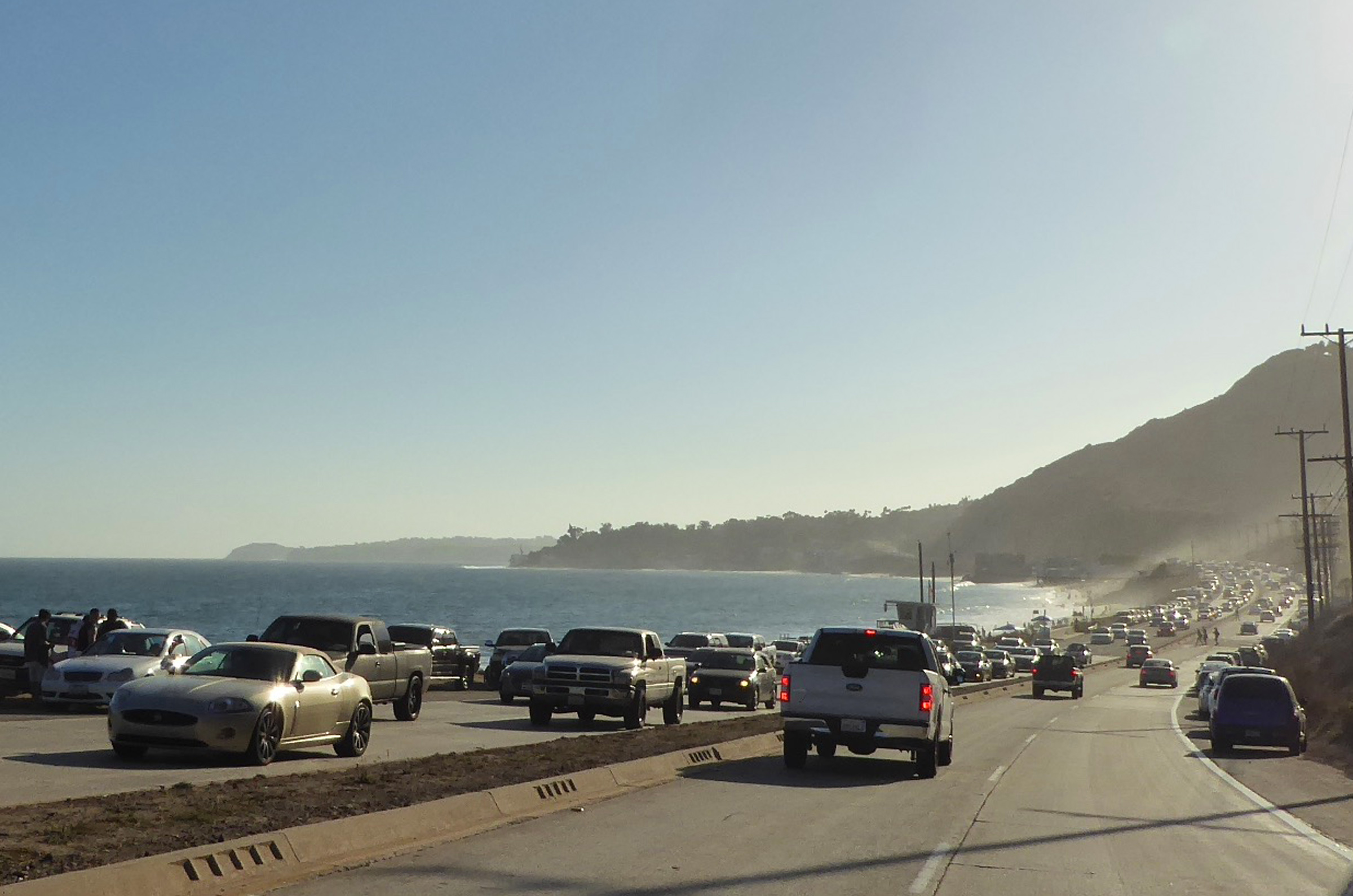 A late afternoon beach walk or sunset picnic offer a way to enjoy the beach even on a busy summer weekend while avoiding traffic. Santa Monica-bound traffic was bogged down from Topanga Canyon Blvd. to Latigo Canyon on the day this picture was taken, but the drive up the coast was much less crowded. Photo by Suzanne Guldimann 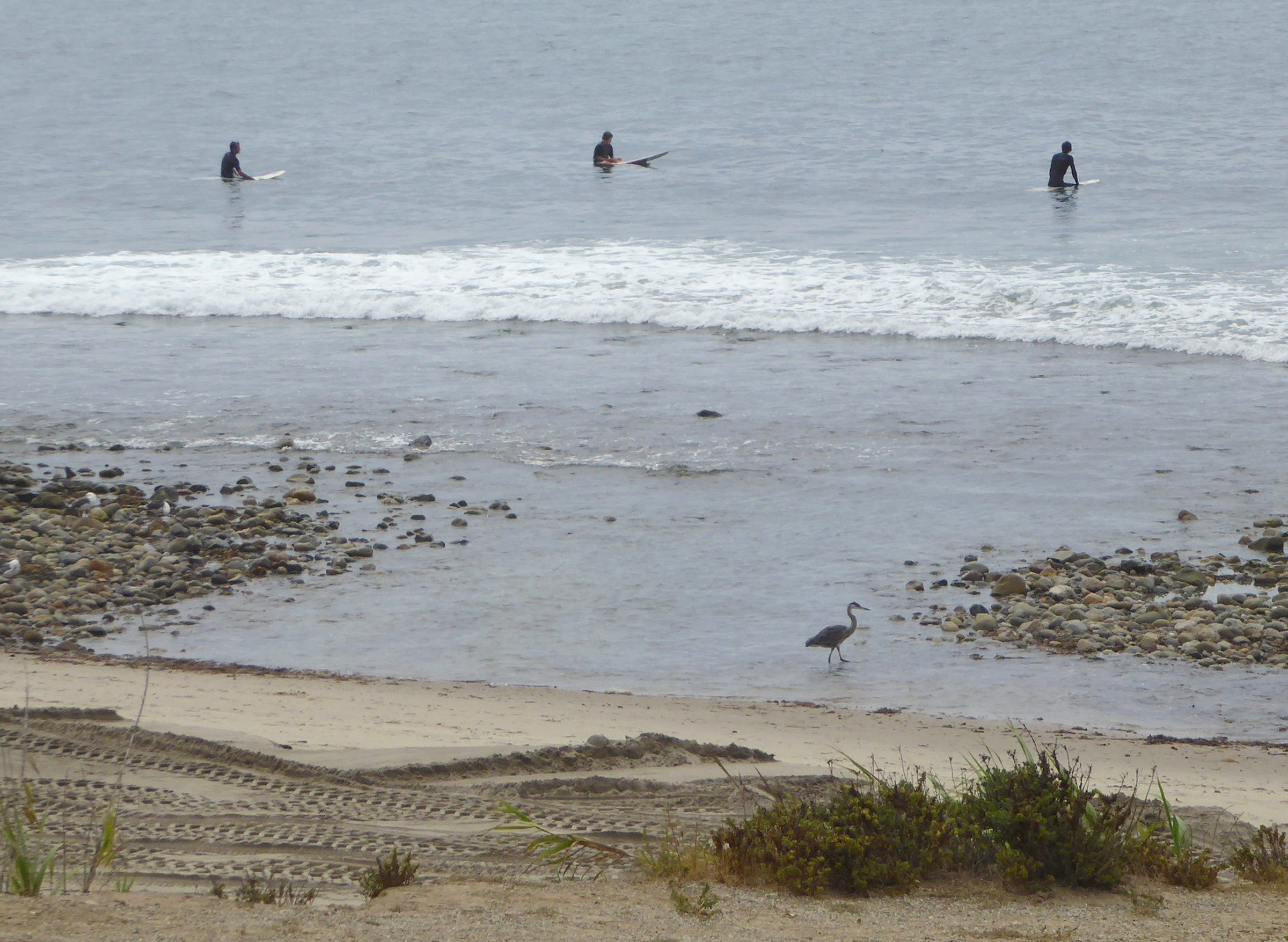 The sun wasn't out yet at Topanga State Beach on this Tuesday morning, but there was plenty of parking and the only crowd consisted of a heron, a trio of surfers and a flock of seagulls. Photo by Suzanne Guldimann 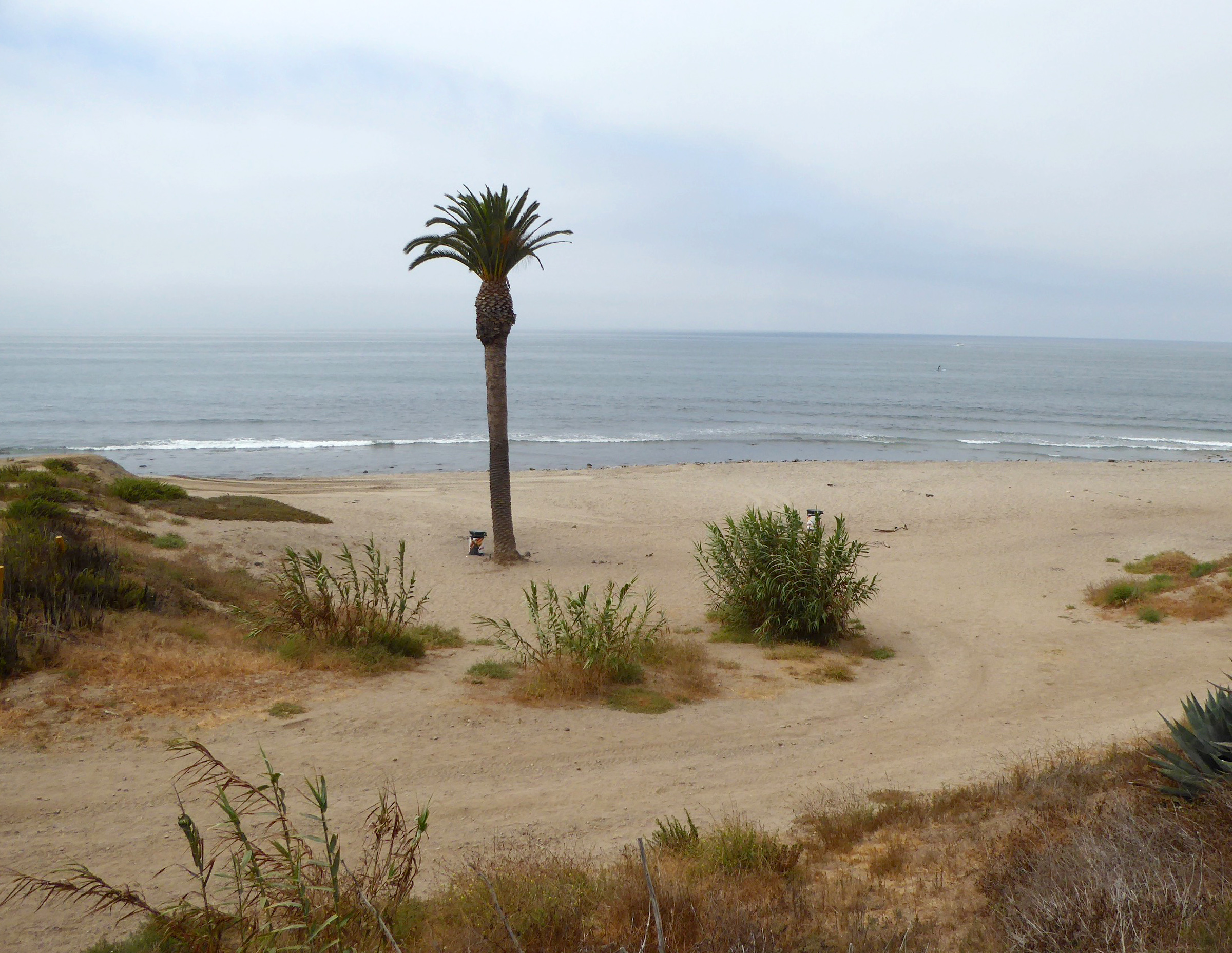 An empty Topanga State Beach Saturday morning, with the western side of the beach unoccupied except for a lone palm tree. Photo by Suzanne Guldimann 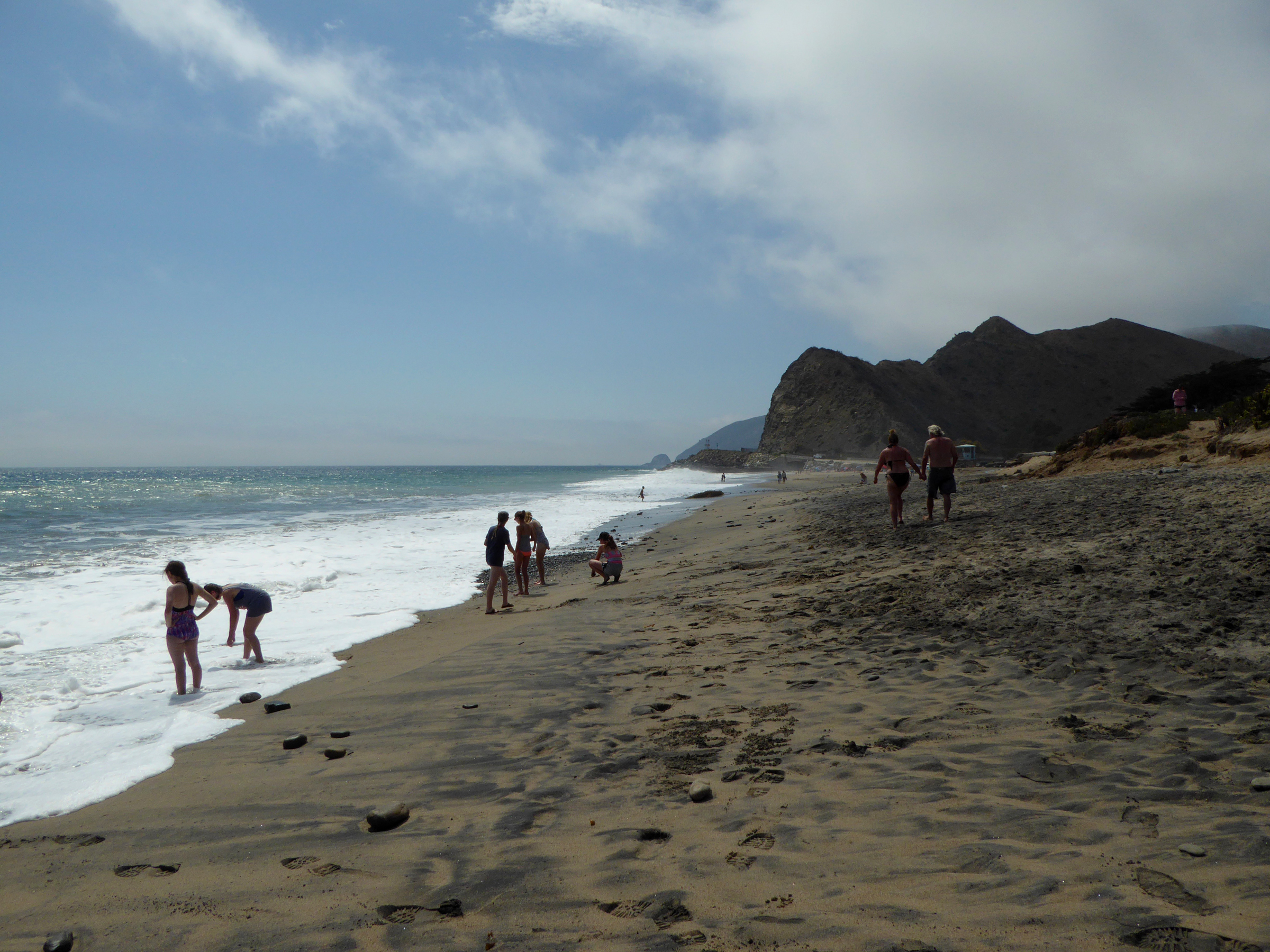 A little farther afield than the other beaches in this article, Sycamore Cove is worth the drive. It’s a favorite spot for seaside picnics and BBQs. This beach—part of Point Mugu State Park—can get crowded during the day, but as soon as the wind comes up in the evening, the crowds diminish and the summer sunsets are often well worth staying for. Be sure to bring a sweater. Photo by Suzanne Guldimann 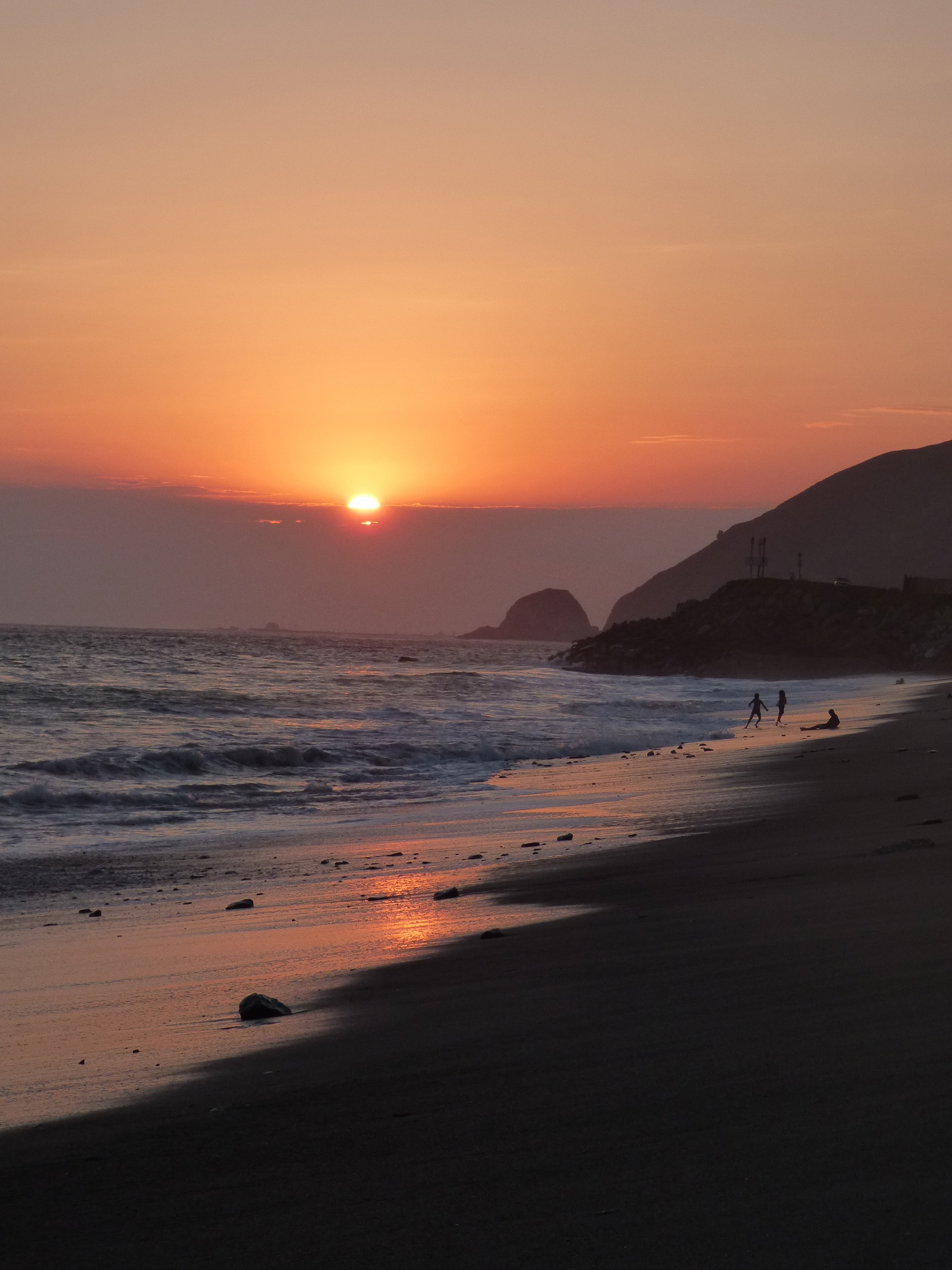 A summer evening sunset in July at Sycamore Cove. Photo by Suzanne Guldimann

The Summer of 2018 is off to a blazing start in Los Angeles County, and the record-breaking, triple-digit heat wave has generated huge beach crowds.

Los Angeles County Lifeguards reported 4,357,666 beachgoers from July 4-8, and the crowds were only slightly diminished the following non-holiday weekend, as hot weather persisted

Getting there remains the biggest obstacle to a day at the beach. Summer beach traffic often inspires canyon and coast residents to stay home rather than brave the roads, no matter how tempting a day at the beach may seem.

Topanga residents can catch the Beach Bus that picks up and drops off three times a day for a hassle-free trip to Topanga State Beach, Will Rogers, or Santa Monica dpw.lacounty.gov/transit/TopangaBeachBus

Topanga State Beach is great for surfing and tidepools, and easy for canyon residents to access, but it’s not ideal for swimming, and it’s been plagued with poor water quality in recent years. Will Rogers State Beach, just east of Topanga, or Las Tunas Beach, to the west, are better options for swimmers, with top marks for water quality. Santa Monica Beach is ideal for walking, biking or people-watching, but it has ongoing water pollution issues that make it a poor choice for swimming.

Zuma Beach routinely receives top grades for water quality and is the county’s biggest public beach, offering four miles of coastline, conveniences like restrooms, showers, volleyball nets, and 2000 parking spaces, as well as free parking along PCH, but even this huge beach fills up on a hot day. Sheriff’s deputies were out over the Fourth of July weekend turning beachgoers away all three days because the lots filled up early and there was no more room.

The best way to beat the crowds is to take time off mid-week for a beach day. Weekday beachgoers not only encounter fewer crowds but drivers also pay slightly less to park in county lots: $6 instead of $8.

When a weekday escape isn’t possible there are still ways to avoid some of the traffic. An early morning beach trip isn’t usually appealing in early summer, when the marine layer tends to linger until afternoon, but in late July and August there’s a good chance for morning sun. Arrive before 9 a.m. for the best parking options, and leave by 2 p.m., while most people are still arriving, for a less stressful homeward drive.

A romantic sunset stroll or evening beach picnic dinner is another good option for anyone wishing to avoid the crowds. By 5 p.m., most beach traffic is headed back to town, leaving the drive up the coast fairly stress free. County lots generally only charge $3 for beachgoers arriving after 4 p.m. Drive home after sunset and miss most of the traffic.

Any summer weekend trip along the coast is going to involve some traffic, but canyon residents who don’t mind a detour can opt for a back roads approach. Taking Mulholland Highway to Malibu Canyon avoids the inevitable weekend traffic backup at the Malibu Civic Center.

Traveling the mountain route all the way to Leo Carrillo State Park is an ideal day trip. It’s easy to stop at the Santa Monica Mountains National Recreation Area (SMMNRA) Visitor Center at King Gillette Ranch on the corner of Mulholland Highway and Las Virgenes Road to pick up information, enjoy a picnic, make a rest stop, or take a quick hike.

The new traffic signal on Kanan Dume Road enables drivers on Mulholland Highway to safely cross what used to be a dangerous and difficult intersection. Rocky Oaks Park, just past Kanan, is another ideal picnic or rest stop, and there are several easy-to-access trailheads along the route.

Mulholland ends at PCH just west of the main entrance to Leo Carrillo. Pay a day use fee to park in the main lot for access to one of the best beaches in Southern California, or park on PCH for free—but use caution and make sure the entire car is off the road, on the far side of the fog line.

On weekdays and on weekend mornings before the beach gets crowded, dogs are welcome at Leo Carrillo’s North Beach. However, dog owners need to be aware that big crowds cancel out dog access.

Sycamore Cove, a short drive west on PCH from Leo Carrillo, offers beachside picnic tables and BBQs. It can be busy during the day, but often clears out in the late afternoon, when the wind comes up.

Head south from Leo Carrillo for Nicholas County Beach, one of the area’s top surf spots, or Malibu’s three “pocket” beaches, El Matador, La Piedra and El Pescador. These beaches with their picturesque sea stacks and caves, have become increasingly popular. Arriving early is the best way to nab a parking space. This is one place where it’s better to pay to park. PCH roadside parking is dangerous on this stretch of coast, and there have been several recent pedestrian accidents, including fatalities.

All of the beaches discussed in this article are patrolled by lifeguards. It’s a good idea to check with the nearest lifeguard tower for current water conditions on arriving.

Packing a jacket, extra towels, sunscreen, water, snacks, and a first aid kit with essential medicines like Epi-pens or asthma inhalers, in addition to general supplies like BandAids can make the difference between a good day at the beach and disaster.

Making sure one doesn’t leave valuables in the car or unattended on the beach is a good way to avert another type of disaster. Arguably the most important thing to bring is patience: no traffic jam, not even when four million people are headed in the same direction, lasts forever, and the beach will still be there, a reward for patience.

Trail and beach information for the SMMNRA, including activities like tide pool walks and beach bird watching: nps.gov/samo/index.htm.

For information on county and state beaches: beaches.lacounty.gov.