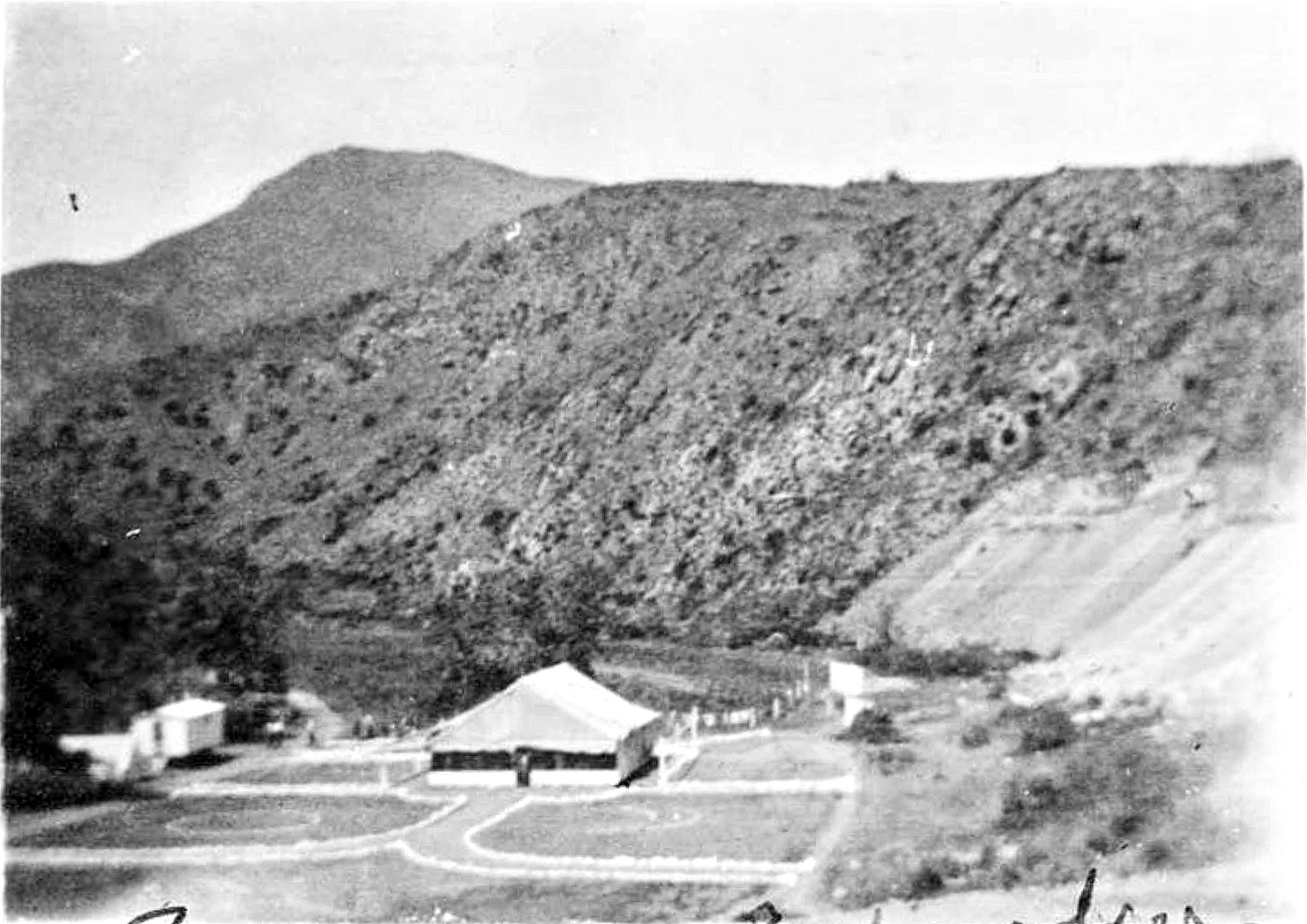 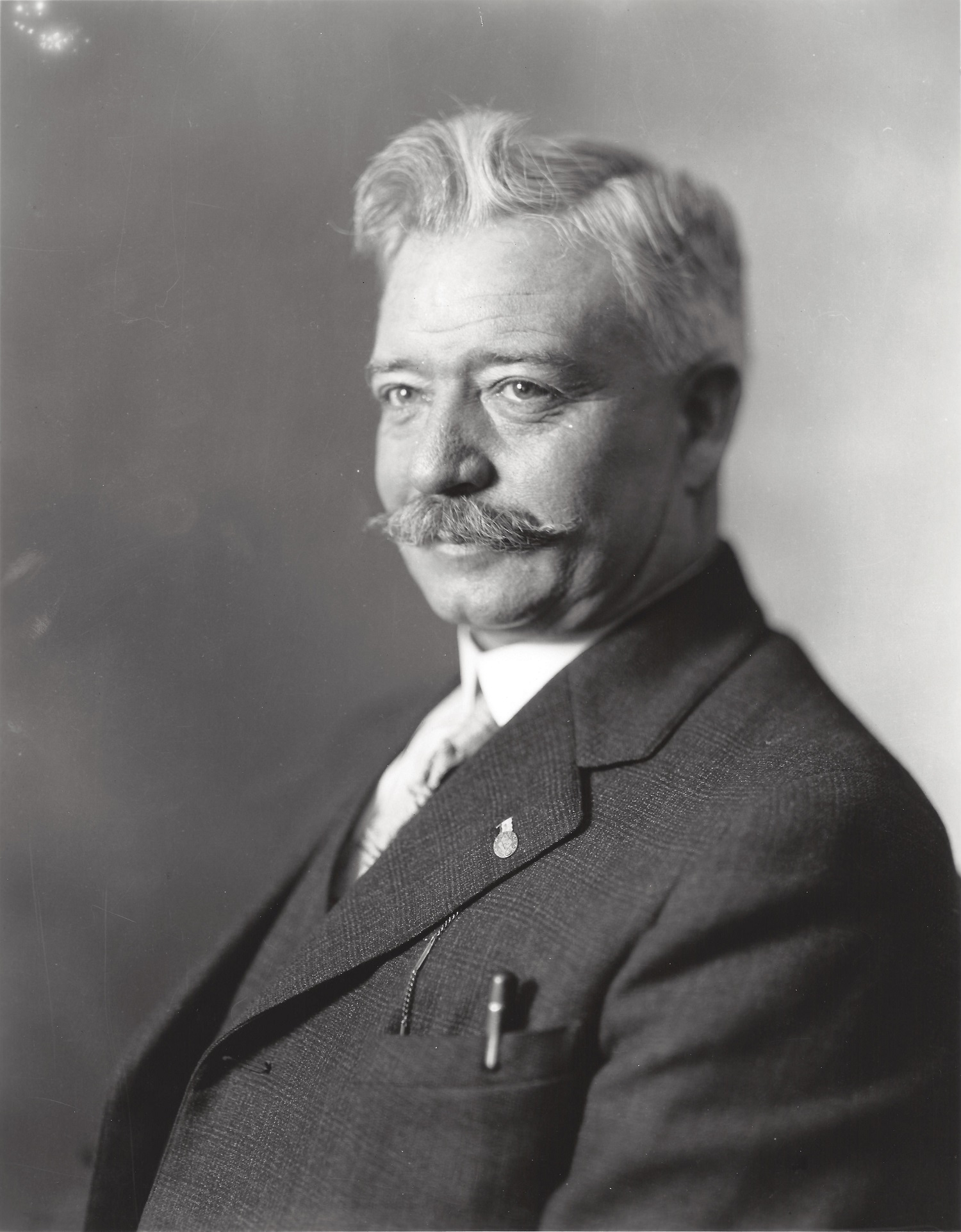 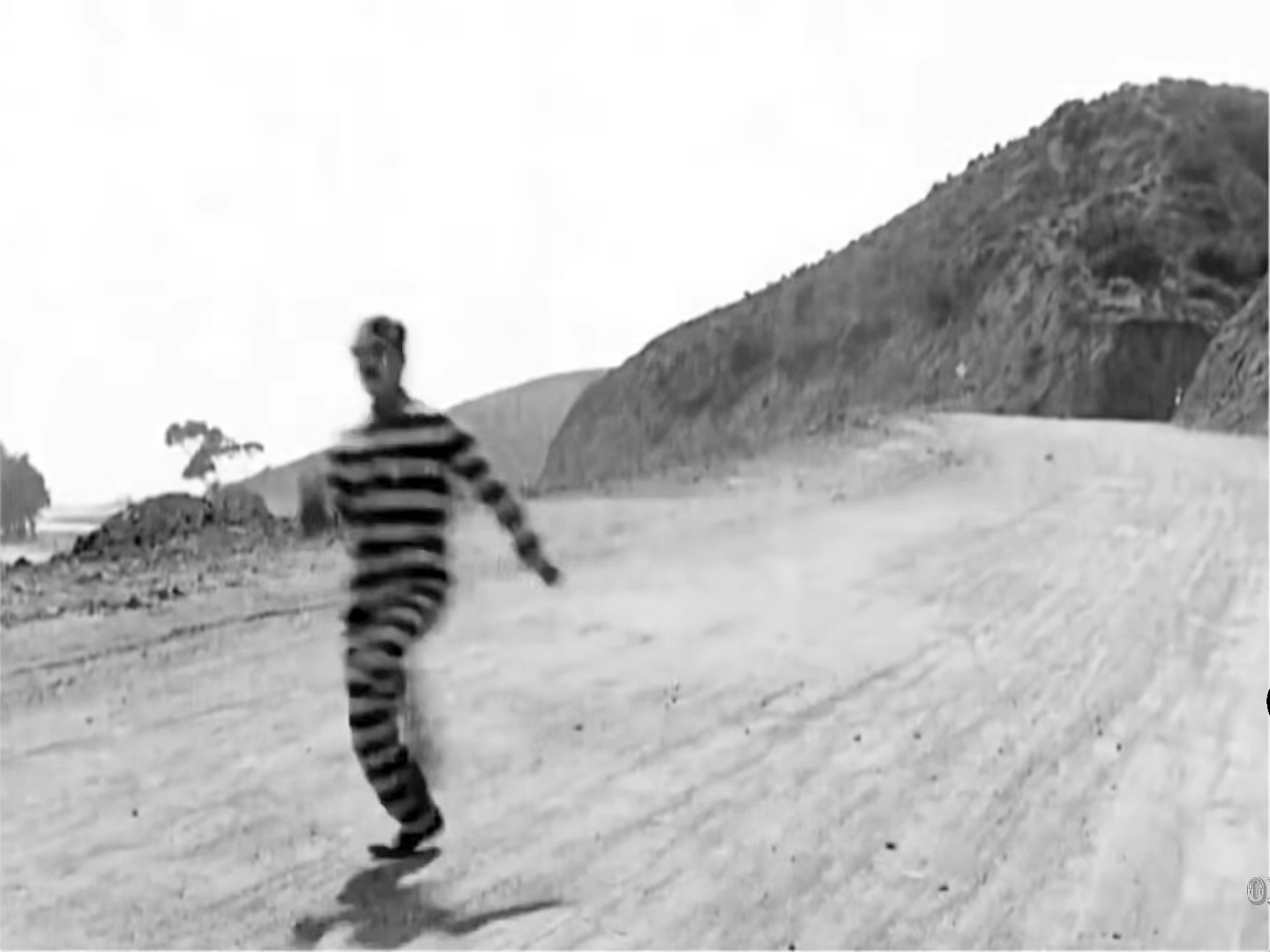 This is a screenshot of Charlie Chaplin running at the entrance to Topanga in The Adventurer (1917) that was filmed at Topanga Beach. The plot is, "The Little Tramp escapes from prison; saves a girl and her mother from drowning; and creates havoc at a swank party." He's obviously escaping from the convict camp in Capra’s article.

The LA County Prison chain gang had been in Topanga on and off as early as 1898, when they worked on the first Canyon road. A stockade built near the beach in September 1911, housed them while they were doing improvement work, but two months later, a wildfire passed through and likely burned it. A more permanent camp was created in April 1913, when the chain gang was tasked with building a whole new canyon road that would stay on the south side of the creek until the S-turns, eliminating the inconvenience of multiple crossings. The camp had “…a large steel cage where the men are kept. This cage is covered with a tent and inside the bunks are placed tier upon tier so that there are sleeping quarters for nearly a hundred men….The ‘village’ is the last word in neatness, and the rock bordered walks from tent to tent, with the trees and canyon as a background, make a beautiful scene.” (“Santa Monica’s Points of Beauty and Interest,” July 26, 1913, The Daily Outlook)

This upgrade was thanks to Sheriff  William Hammel (1865-1932), who had campaigned for “…country quarters for prisoners where open-air occupations can be provided in the effort to make better citizens of wrongdoers… not down on the river bottom, though, but on a hill, where there’s plenty of fresh air and sunlight and a wide sweep of view; let’s give ‘em the best we’ve got.” (“Treat ‘Em Like Human Beings,”  November 8, 1912, Los Angeles Times)

Other reforms Hammel fought for were to pay prisoners for their work, and to give them more dignified uniforms.

“We [should] quit the idea of making clowns of the prisoners and make them look like civilized human beings by clothing them in decent suits of one color.” (“Treat ‘Em Like Human Beings,” November 8, 1912, Los Angeles Times)

Within a year, the prisoners were earning $1.50 a day, and their blue-and-black suits were changed to brown.

Hammel was an idealistic and ethical man. In 1899, he had hired Los Angeles’s first Black deputy sheriff, Julius Loving (1863-1938), to keep his election promise to the African-American community. The next Sheriff fired Loving, but Hammel was later re-elected and rehired him. Loving spent the rest of his life in the department, rose in the ranks, and gained the respect of his colleagues.

Hammel was also childhood best friends with one of LA’s first Hispanic sheriffs, Martin Aguirre (1858-1929). When Hammel became sheriff, he rehired Aguirre as his deputy. Still, Hammel’s idealism sometimes blinded him or made him conceited.

He called the convict camp the “Hammel Recreation Camp” and the new road, the “Hammel Highway.” When he brought the LA County Board of Supervisors to inspect the work, he treated them to a surprise barbecue. Afterwards, they lectured the prisoners about dignity, patriotism, and the unfairness of their plight, then gave them a half-day off to swim in a nearby pond. The day’s “entertainment” continued with Hammel taking his guests to the Inceville studio at Sunset to see a movie and meet the Native American tribe that lived there as Western actors.

Hammel shared a widespread disconnect about what was really going on with the chain gang, whose typical crimes were vagrancy, failure to support their families, and assault.

In the article titled “Points of Beauty and Interest,” the convict camp was featured next to the La Brea Tar Pits, and described in the same touristy language. Of the chain gang, the article said, “They are a happy and contented lot, for they are kindly treated and well fed and the work is not very hard.”

A second article conjured up a vision of the camp that could have come from Thomas Kinkade.

“The picture presented was one for the brush of an artist…. The great dormitory sits in the center of what will soon be a beautiful garden. The prisoners have already marked off the plot for flower designs….” (“Would Abolish Convict Labor,” May 14, 1913, Los Angeles Times)

A third article listed “frequent sea baths” and “an increase in manliness” as some of the benefits of being Topanga convicts, as if it were the Junior Lifeguards. The jailers, appearing to be on vacation, “pitched tents for their wives and families during the summer season” on the opposite side of the creek.

On July 29, 1914, Santa Monica realtor Al F. Young, 41, started a bus line to Topanga Beach that he advertised as a sightseeing tour.

“First there is Santa Monica Canyon itself, said to be the place where vast pirate treasures have been hidden. Then there is the long wharf, the longest in the world, and just beyond this is the Japanese village, always a source of wonder to visitors in California. The burning mountain, whose fame is nation-wide and whose solution is the enigma of scientists is seen on this trip. Santa Ynez canyon and the famous moving picture camp and village is one of the main stops…. The county convict camp at the mouth of the [Topanga] canyon always proves a point of interest and is within a stone’s throw of the terminus of the line.” (“Bus Line on Coast,” July 28, 1914, The Daily Outlook)

Santa Monica Librarian Elfie Mosse (1868-1939) started a feel-good campaign to bring the prisoners donated books, although she cautioned that “Too sensational literature is not desired.” She was later honored as a pioneer for giving prisoners reading material.

However, the unhappiness of the chain gang couldn’t be denied.

In February 1914, Margarita Castor walked from Oxnard to Los Angeles to beg deputy sheriff Martin Aguirre to release her husband Cacino, who had stolen a suitcase. The story of Margarita’s devotion allowed Cacino to return home on probation, and Aguirre raised money for him to start over.

There were also many prison breaks. The biggest was on August 26, 1915, when ten men, relying on a noisy generator to mask the sound of filing through the bars, escaped through a hole in the roof and into the hills. The one who caused the most alarm was a Native American, Francisco Flores, a repeat criminal who had already served time for attempted murder. “He costs the city too much for gasoline…. We have to haul him to the station in a patrol wagon too much,” a police officer quipped.

Charlie Chaplin later parodied a Topanga prison break in The Adventurer (1917), where he can be seen running from deputy sheriffs at the entrance to the Canyon.

The new Canyon road was finally completed on May 29, 1915, and, for the first time, it went all the way to the Valley. A celebration was held at the Top of Topanga by The Automobile Club of Southern California, followed by a parade of cars decorated with pennants. No stop was made at the convict camp at the beach.

The convicts immediately began working on new projects like building the road up Tuna Canyon and elevating the Coast Highway. By the end of their time in Topanga, around 1917, their enchanting myth had disintegrated like the American flag flying over their camp.

“The miserable apology for the nation’s emblem is weather-worn, tattered and faded, and flutters in pathetic ribbons before the gaze of hundreds of auto parties bound over the coast road or through the scenic canyon.” (“Flag in Distress,” July 10, 1916, Santa Monica Bay Outlook)

As if echoing their suffering, a similarly weathered flag still flies over Topanga Beach.