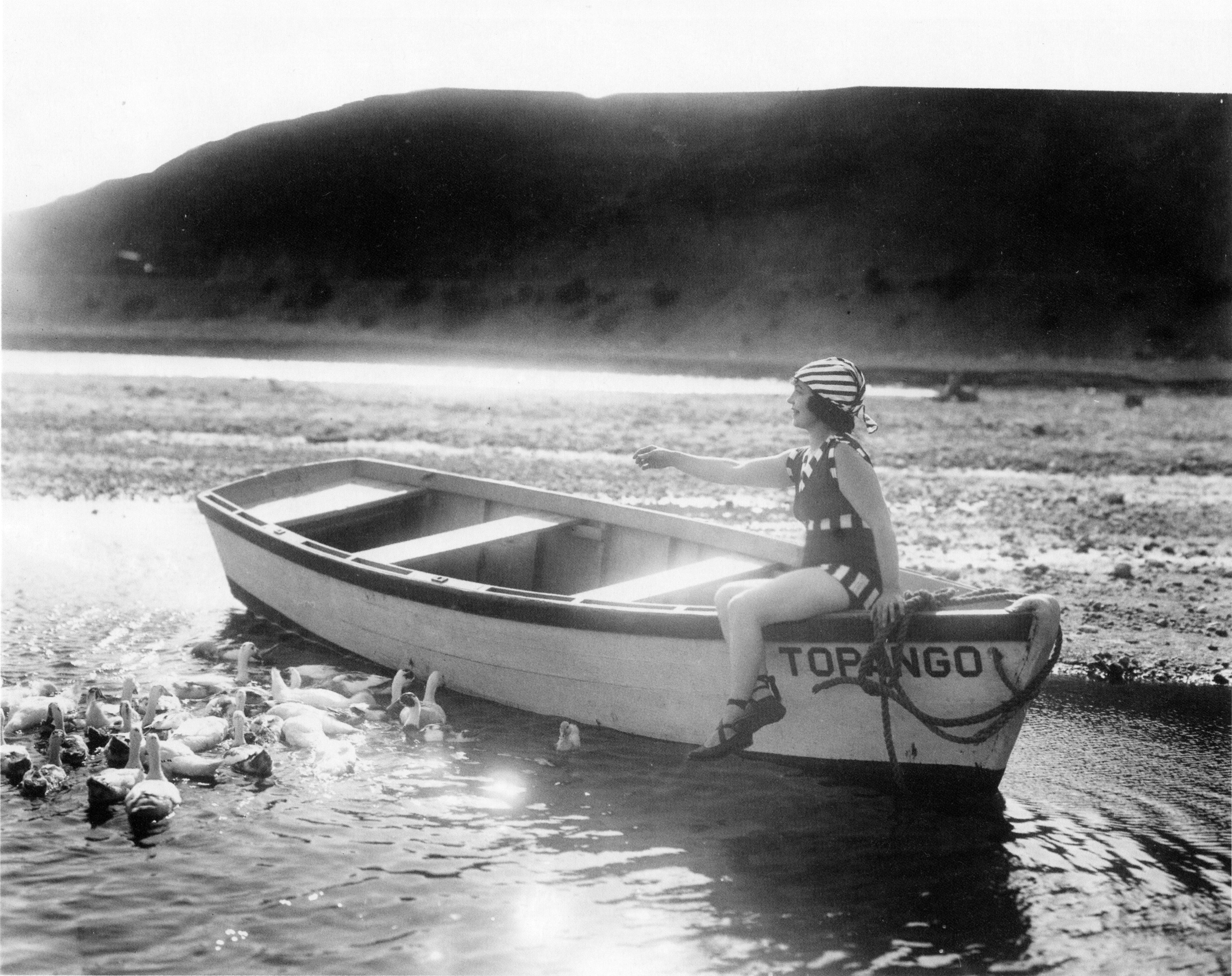 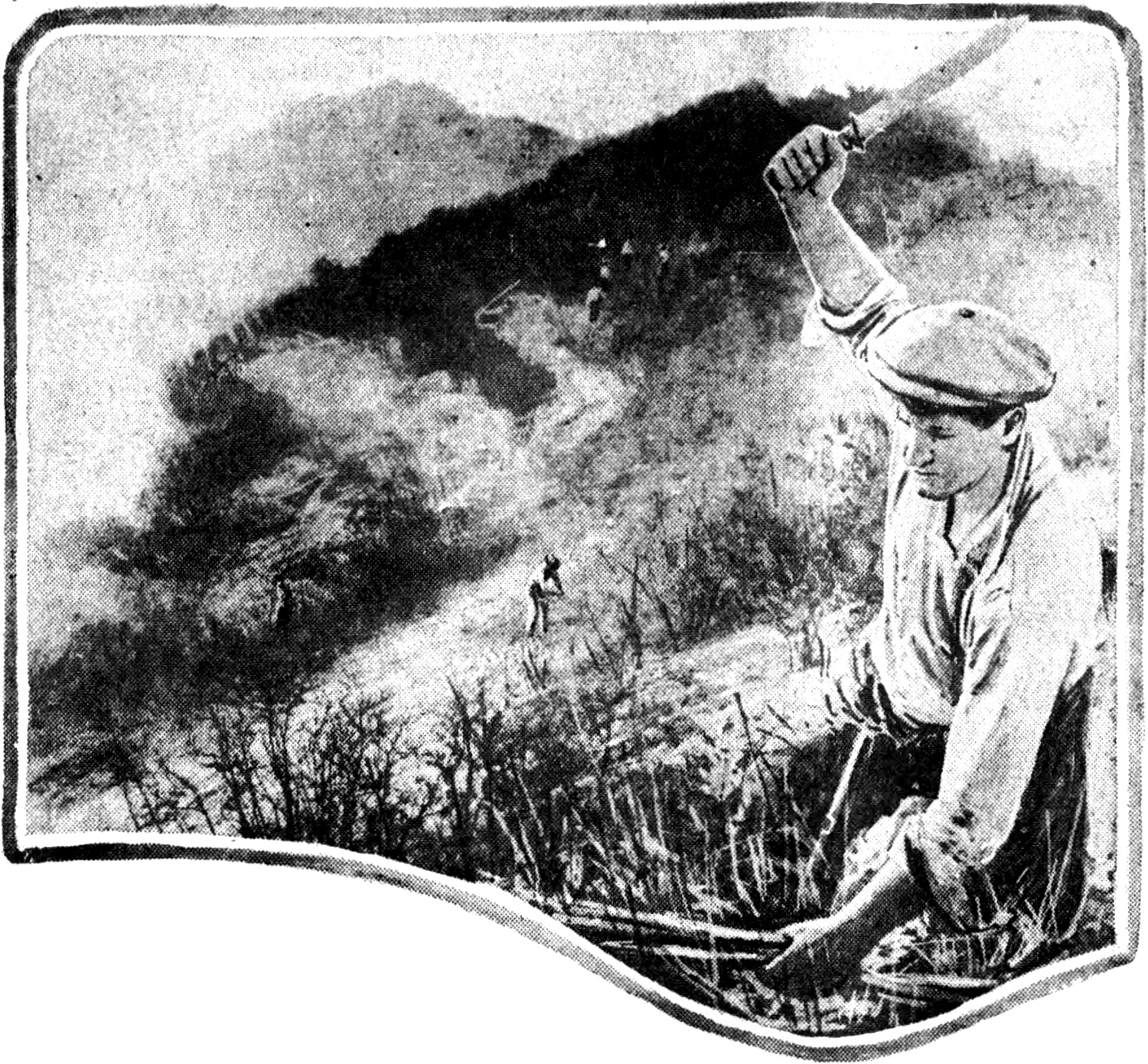 Archie Cooper fighting a fire in the Hollywood Hills. Photo provided by the author 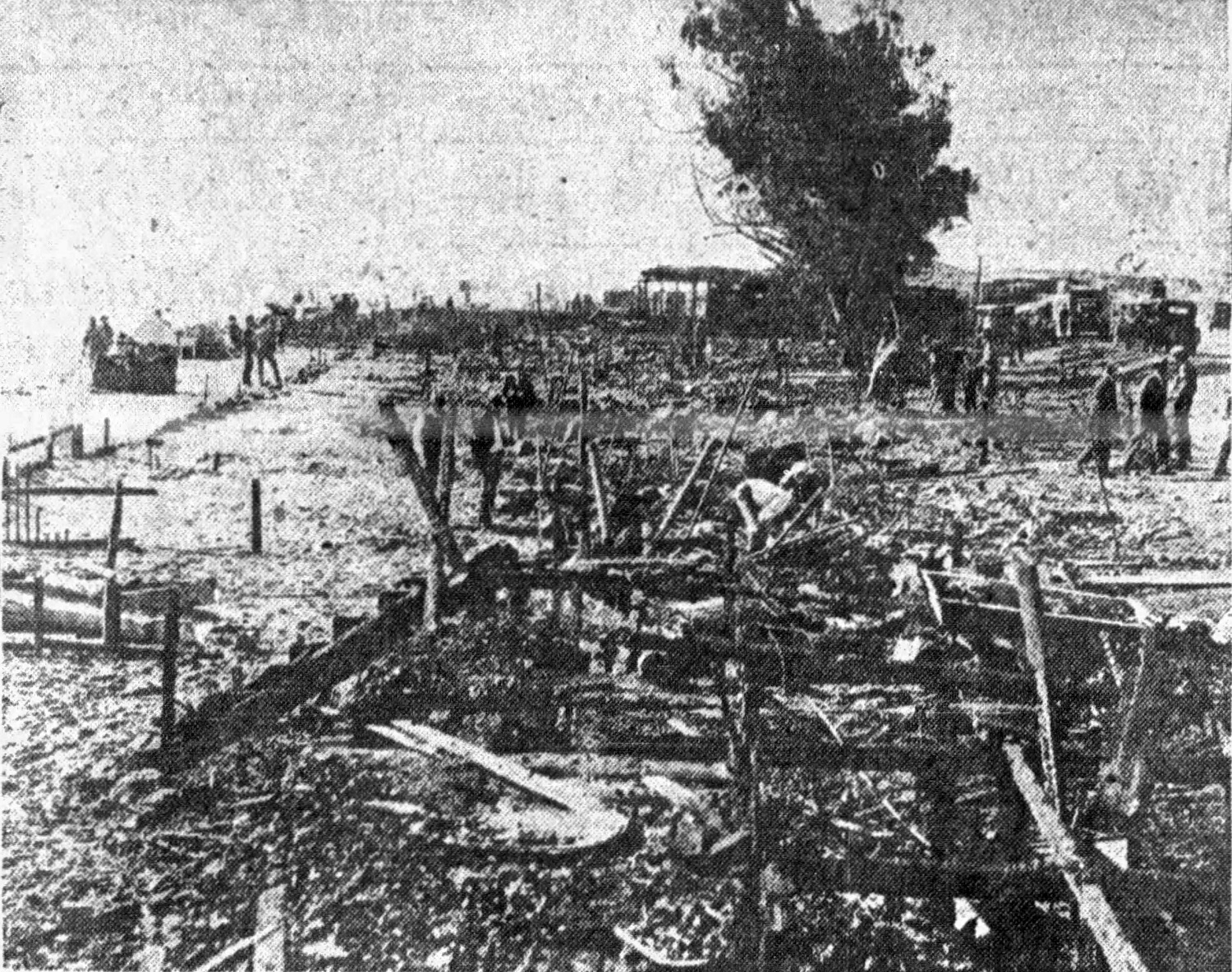 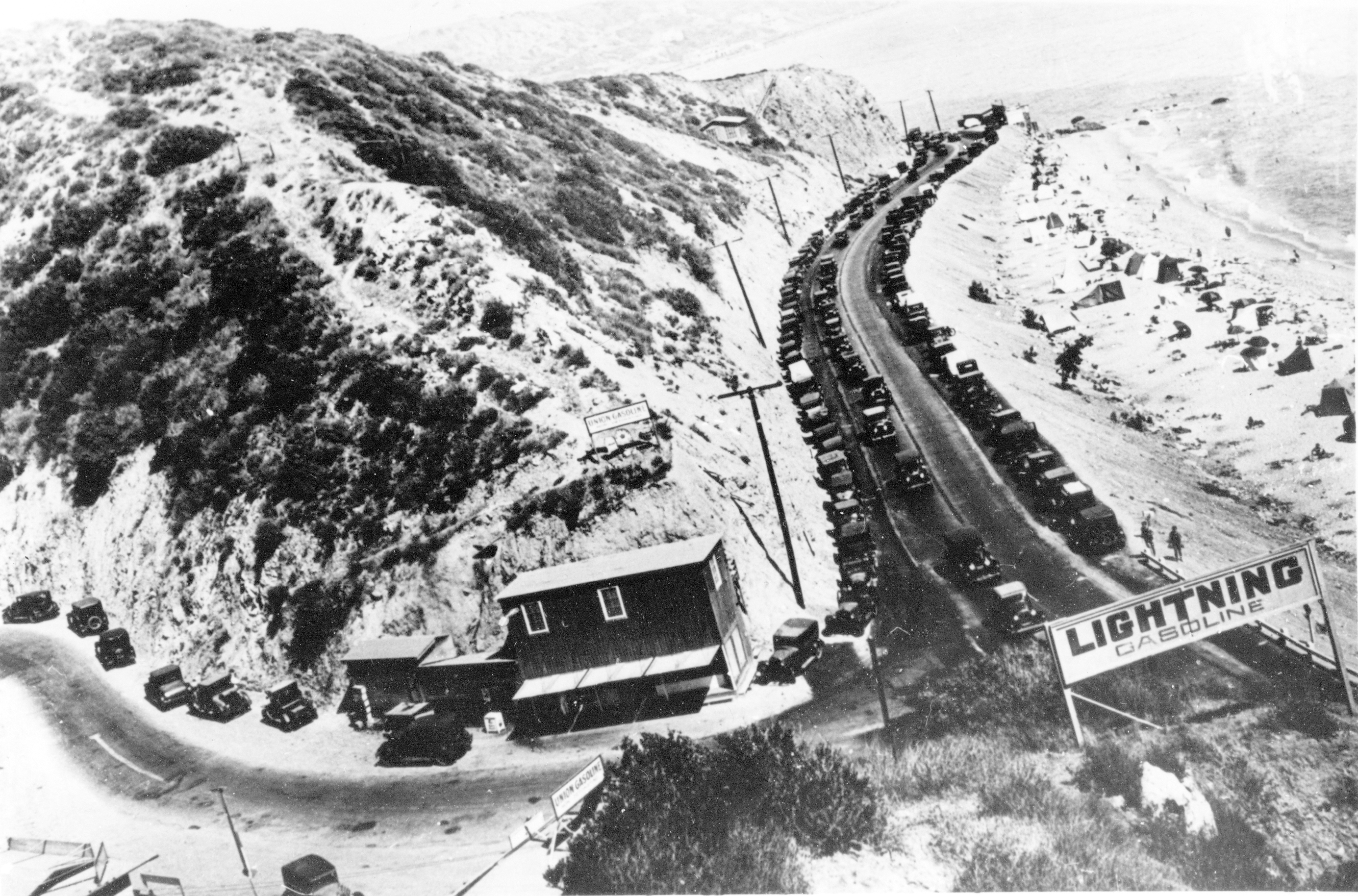 The speakeasy may have been in the store at center. Houses on the beach had recently been washed away by "monstrous waves." c/o Topanga Historical Society / Tegner collection, circa 1928 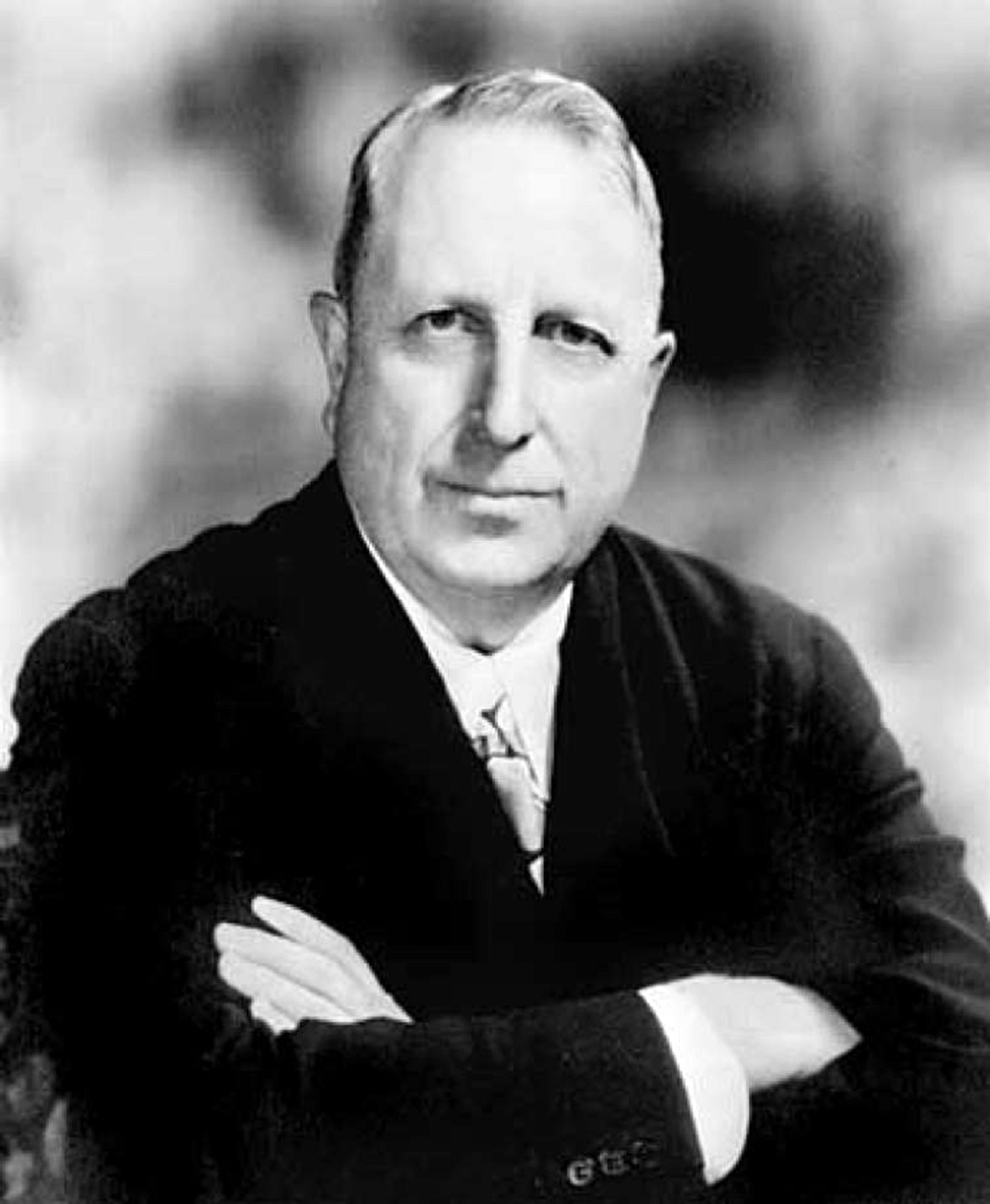 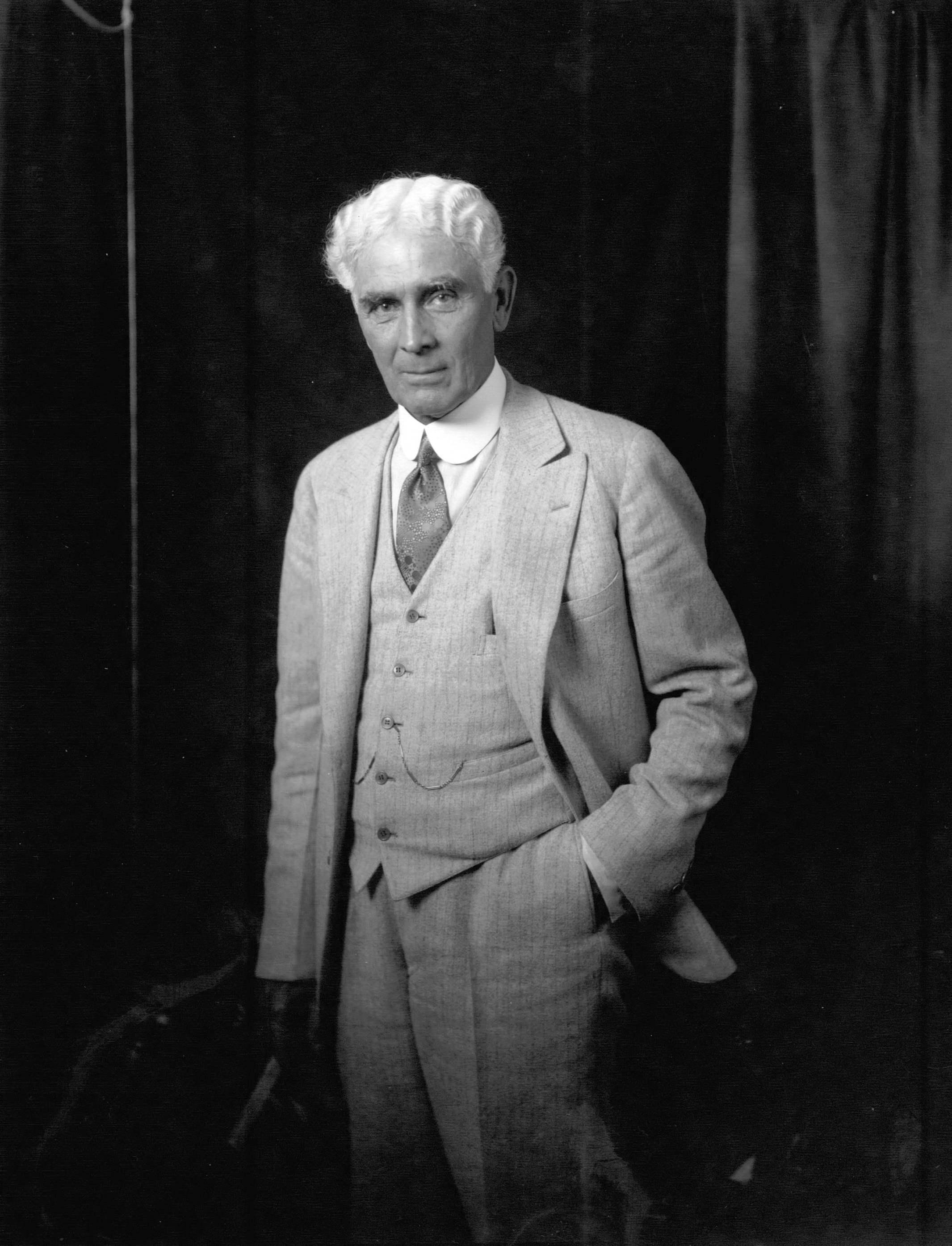 While the Topanga Yacht Harbor never materialized, in 1975, the Topanga Woman’s Club formed the Topanga Creek Yacht Club, “in view of the importance of the creek to life in Topanga.” (See “The Topanga Story,” page 385, for the full story.)

The bigger rodeos on the Coopers’ Ranch were catered by “world’s famous barbecue artist” Joe Romero, but for the smaller ones, they used their own Spanish chef, Fred Ramirez.

During their Fourth of July rodeo in 1923, Ramirez’s barbecue pit accidentally set the hill on fire. The rodeo halted as everyone rushed to defend Cooper’s Camp. No structures were lost, but the fire burned all the way to Las Flores Canyon. Deputy fire wardens had warned the Coopers about their dangerous barbecues, having received numerous complaints.

The night before the Tom Mix rodeo on September 30, 1923, Deputy Fire Warden Max J. Stanke saw Ramirez building another bonfire and ordered Deputy Sheriff Archie Cooper to extinguish it because it was too close to the brush. Archie argued about the law, and the two men fought.

Stanke was 50 lbs. lighter than Archie, and disabled, but he was no one to mess with. Engaged in submarine warfare off the Irish coast during World War I, he’d suffered a nervous breakdown and mangled his right hand. He’d moved into a cabin at Cooper’s Camp to recover while living on government compensation. Ironically, Archie had helped him get his job, but some later resentment must have erased that friendship.

Stanke dominated Archie in the fight. Known for being a bully, Archie retaliated by what we might call “swatting” Stanke.

“Deputy Cooper appealed to the Sheriff’s office after the fight, and a squad of deputies responded…. Cooper declared that there was an insane man barricaded in a cabin at the ranch… and that he drew his gun and threatened to shoot people.” (“Veteran Thrashes Deputy,” (Los Angeles Times, October 1, 1923)

“Cooper had a fire, eight by fourteen feet, burning in a dangerous place. I told him that I would report him for violating the fire laws. He became abusive, threatened me and eventually struck me. We were then on my premises. I fought back and drove him out of my yard. He then shouted that I was under arrest. I told him that it would take a better man than him to arrest me and went in my house. He ordered out all his employees, armed them with guns and surrounded my house. Feeling tired, I went in and lay down. When the deputies came I surrendered to them. I have numerous witnesses to prove that I did not draw my gun, and that Cooper started the fight.” (“Veteran Thrashes Deputy,” Los Angeles Times, October 1, 1923)

An official investigation into the incident supported Stanke’s account.

“I am satisfied that there were no grounds for Mr. Cooper’s complaint of assault with a deadly weapon…. From the statements of numerous witnesses to the affair I conclude that Cooper was entirely in the wrong and was responsible for the fight.” (“Beaten Deputy Resigns,” Los Angeles Times, October 2, 1923)

Archie was charged in a similar incident three years earlier, when he allegedly assaulted a Black man named Arthur Valentine. The charges in that case were dropped after a lengthy court battle. Members of the African American community who lamented that miscarriage of justice saw this incident as divine justice.

“…an unerring judgment on this ferocious Cooper has come to pass and just a few days hence, he pounced upon a white man, and he got all that was coming to him, he got the beating of a lifetime, he got what he gave Valentine and then some, he has lost his job as Deputy Sheriff and truly in fact and in deed retribution for Arthur Valentine was at hand.” (“Retribution,” California Eagle, October 1923)

Realizing that he couldn’t keep his job, Archie immediately resigned, but protected his dignity by claiming that “the pressure of his business caused this action.” He also said that he’d been contemplating this change for a long time, which was probably true, since Cooper’s Camp had grown far beyond the campsite it was intended to be, and now involved the management of rodeos, restaurants, dozens of cabins, and a bathhouse.

However, Archie continued to bully Stanke.

When Stanke returned home from being jailed on Archie’s false charge, Archie had him incarcerated in the General Hospital on a psychiatric hold until a judge released him.

In court, Archie hired the same crooked attorney who’d helped him win the Valentine case, John L. Richardson, and was acquitted of violating State fire laws. Chef Fred Ramirez, on the other hand, was found guilty, but given a suspended sentence. Stanke was found to be sane. It’s unknown if Archie received any punishment for harassing Stanke, or if Tom Mix’s rodeo was canceled.

Signaling the downfall of Cooper’s Camp, Archie’s fight with Stanke was preceded in 1922 by an alimony suit from his estranged wife, Emilie E. Cooper (1891-1977), and followed in 1924 by the failure of his Fourth of July bullfight rodeo. In August 1924, a classified ad sold off the dance pavilion that had been the initial success of the Camp.

THE TOPANGA YACHT HARBOR THAT NEVER WAS

In September 1924, the Los Angeles Athletic Club bought 1,800 acres of beach property from the Title Insurance and Trust Company with the intention of building a Topanga yacht harbor, a beach club, and subdividing the rest of the land among their members. The sale was facilitated by real estate developers General Moses Hazeltine Sherman and Eli P. Clark, instrumental in the creation of the Hollywoodland development one year earlier.

In July 1925, William Randolph Hearst (1863-1951) also got involved, buying (or buying an interest in) 3,400 acres of the historic Rancho Boca de Santa Monica that included Topanga Beach. The ranch’s remaining 2,000 acres were bought by friends of Hearst.

Hearst’s intentions were kept secret, but he was said to be “heavily interested” in the planned Topanga yacht harbor. He also bought property in Tuna Canyon, which was rumored to be for a movie studio. Later rumors that Tuna Canyon was the first proposed site for Hearst Castle ring false, since he’d already started building his castle in 1919.

While Topanga Beach was changing hands, bootleggers sensed a lack of oversight and grew bolder.

In January 1925, Deputy Fire Warden H. D. Smith encountered a gang by an empty cabin, believed to be waiting for a midnight rum ship. The gang beat him with a club, and Smith was found in the morning seriously injured. An investigation by Archie Cooper and Deputy Sheriff William Edward Harris turned up a description of one of the suspects, a dark-skinned man in a blue serge suit. The getaway car was described as a gray Studebaker with a white stripe.

But could these stereotypical gangland descriptions have been fabricated to hide a sketchier story? Later that year, Harris and Smith were themselves arrested for running a speakeasy in a small store at the entrance to Topanga Canyon.

“Topanga beach establishments have been operating for some time, and…it has been the custom of the operators to bring up many gallons of illicit liquor to the place early Saturday, which has served as refreshments over the week-end.” (“Canyon Raid Disastrous to Deputies,” Santa Monica Evening Outlook, August 17, 1925)

The Cooper brothers, surely aware of what was going on, were not implicated in the raid.

In September 1925, the rarely mentioned Miller Cooper and his wife, Mary M.,  hosted one of the family’s last events at Topanga Beach: a wedding between their oldest daughter Edna Janet Cooper and Alfred Jackson Sutton, of Metro-Goldwyn Studios. Miller’s middle daughter, Sarah Eleanor Cooper, was the maid of honor, and his youngest, Mary Cooper, was the ring bearer.

The wedding was a joyous respite before 1926 arrived with back-to-back disasters.

Early in the morning on January 3, 1926, a fire started in an empty cabin and spread in both directions. No lives were lost, but the bathhouse and 10 beach cabins burned, and the dance pavilion was damaged. The cause of the fire was not discovered, but Sylvester Elliot, 28, of Topanga Canyon was arrested. Closer scrutiny revealed that this watchman of the beach had pretended to be a federal officer in order to get his job, and that he was writing bad checks.

In February 1926, two weeks of storms that hailed and high tides with “mountainous waves” destroyed a fish market owned by J. Loomis and 14 cabins. A story was told of two women who had rushed all the belongings from one’s cabin into the other’s, only to find that they’d chosen incorrectly which cabin would survive. It’s surprising that any cabins were left on the beach.

Even more tragic were the deaths of two men who were repairing a pier at Inceville when their boat capsized: Thomas Compton of Santa Monica, and Harry Hoover of Topanga. Two other men were rescued by lifeguards, who resuscitated them in the old church movie set left over from an Ince film shoot.

The Coopers’ business was devastated, and they left Topanga Beach soon afterwards, but more hardships followed.

Miller moved to Paso Robles, where his daughter Sarah, 19, died in November 1926, “after an unsuccessful effort to save her life by an operation.” Perhaps from a car accident? Many of her former Santa Monica High School classmates attended her funeral.

Archie moved to Mint Canyon, near Santa Clarita, where he became involved with an interesting but unethical woman, a widowed sculptor who had a restaurant, a 1,600-acre ranch, several children, and two names: Mrs. Vera Sharp and Mrs. De Font. In August 1927, Sharp was accused of stealing clothes and silverware from a neighbor’s house. She and Archie were also accused of stealing a cow and barbecuing it for her restaurant. It would seem that Archie had finally sunk to being a common criminal.